The Current State of Agricultural Education

Once wellsprings of chemical innovation, our nation's colleges and universities are finally rising to meet student demand for a more sustainable future. 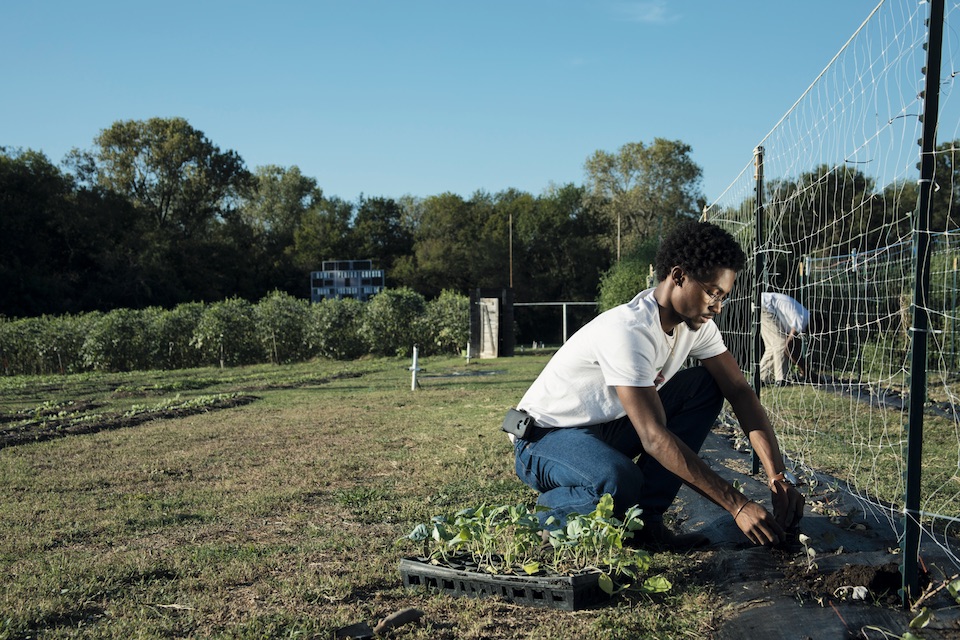 While overall agricultural enrollment at America’s 75 land-grant universities remained relatively flat between 2004 and 2015, the number of programs devoted to sustainable-farming practices, or “agroecology,” has soared since the USDA started tracking them in 1988.

Most weekday afternoons, Chandler Taylor-Henry, a sophomore at Paul Quinn College in Dallas, heads to the school’s football field, where he plants seedlings, harvests vegetables, and feeds the Wyandotte, Australorp, Araucana, and Rhode Island Red hens. A scoreboard and an old goalpost rise from a blueberry patch in one end zone. Turnips thrive near the fifty-yard line. “This farm is part of what drew me to Paul Quinn,” says Taylor-Henry, who grew up in Jackson, Mississippi.

The historically African American liberal arts college, founded in 1872, does not claim a strong focus on agriculture, or so much as a department devoted to its study. The decision to turn gridiron turf over to the cultivation of organic produce, in 2010, stemmed largely from financial pressures. Facing bankruptcy and a graduation rate of 1 percent, Paul Quinn could no longer justify spending $600,000 a year on a losing football team. The school’s We Over Me Farm has since expanded to occupy four campus acres, generating $40,000 in annual gross revenue (partially from sales to the catering company at the Dallas Cowboys’ stadium). Roughly a quarter of the incoming class of 2017 graduated, and applications – from ambitious students like Taylor-Henry – are up 262 percent from 2010. “My goal,” says the 19-year-old, “is to work at the USDA and help the country get away from unhealthy foods.” 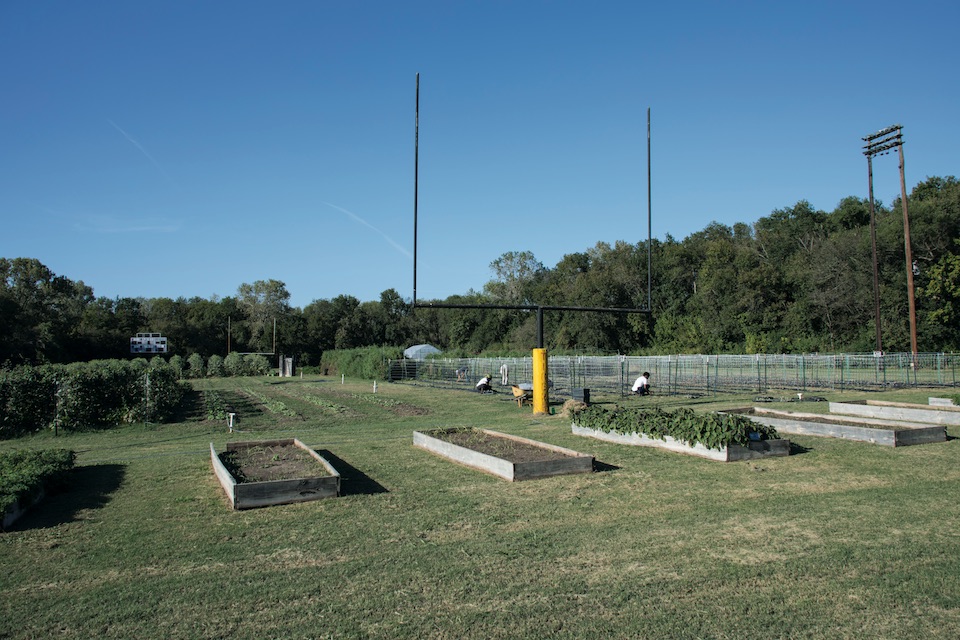 PAUL QUINN COLLEGE
Dallas
At this historically African American liberal arts college, established in 1872, agriculture doesn’t enter into the curriculum. No matter. Since the We Over Me Farm took over the home turf of the losing football team, the Paul Quinn Tigers, in 2010, the college’s graduation rate has soared from 1 to 25 percent.

He’s not alone. While overall agricultural enrollment at America’s 75 land-grant universities remained relatively flat between 2004 and 2015, the number of programs devoted to sustainable-farming practices, or “agroecology,” has soared since the USDA started tracking them in 1988. What began as a list of one B.S., at the University of Maine, has evolved to include 256 programs, 97 of those leading to bachelor’s, master’s, and doctoral degrees. The field has even spawned its own professional organization, the Sustainable Agriculture Education Association, co-founded by Damian Parr in 2006.

Parr, 45, research and education coordinator at the Center for Agroecology & Sustainable Food Systems at the University of California, Santa Cruz (UCSC), cites student interest as the driving force behind the change. “It’s different from the 1960s, when the young people who cared about these things went back to the land and became vegetarians. Kids today are thinking of how they can insert themselves into food-system institutions and do the work necessary to hold those institutions accountable.” (Full disclosure: Parr and I first met as UCSC undergrads nearly 20 years ago.)

Even at Texas A&M University, once a font of chemical “innovation,” the times are a-changin’. Norman Borlaug – DDT champion, climate-change skeptic, and father of the so-called Green Revolution that ushered in synthetic fertilizers and pesticides during the mid-20th century – served as a prominent A&M faculty member before he passed away in 2009. That same year, a handful of young Aggies established the organic Howdy Farm on campus. And the school is rapidly developing a reputation for research in eco-friendly arenas such as carbon sequestration. 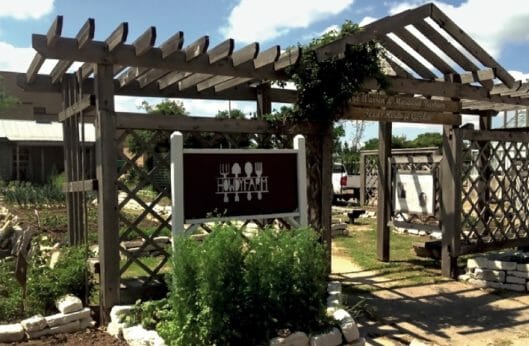 TEXAS A&M UNIVERSITY
College Station, TX
One of the largest agricultural schools in the nation – with 7,800 of the 66,000 students pursuing degrees in agriculture and life sciences – this 1876 land-grant university helped usher in farming’s chemical age. Photo courtesy of Howdy Farm. 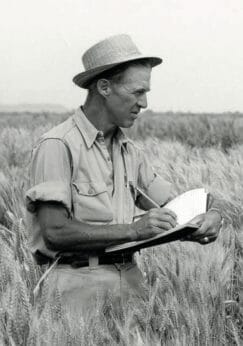 The stigma persisted until recently, says Michelle Schroeder-Moreno, an agroecology professor at North Carolina State University (NCSU) in Raleigh. “When I came to NCSU 13 years ago, most farmers I talked to didn’t want their kids to follow in their footsteps. And the kids, of course, could see their parents struggling financially. But now an increasing number of young people want to farm, and farm organically.” 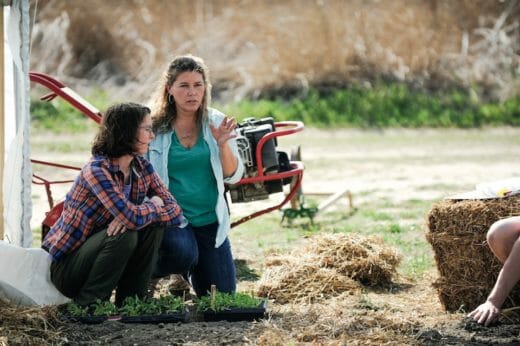 NORTH CAROLINA STATE UNIVERSITY
Raleigh, NC
This 1887 land-grant university was known more for educating tobacco-company heirs than challenging the status quo. But things have changed since associate professor Michelle Schroeder-Moreno (above, kneeling next to student Morgan Malone) arrived on campus in 2004. She pushed for an undergraduate major in agroecology and sustainable food systems, as well as the six-acre Agroecology Education Farm. Courtesy of Michelle Schroeder-Moreno. 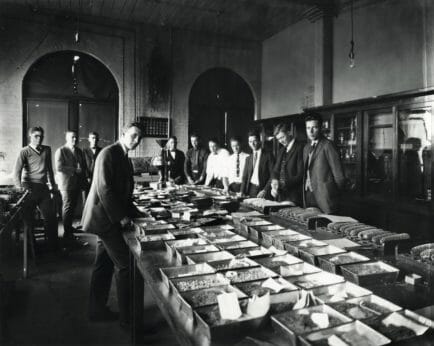 Schroeder-Moreno says that about half of her students these days are women – hardly the case in the 1920s when this all-male cadre studied seeds. Photo courtesy of NCSU Libraries, Special Collections Research Center.

Back in 2005, NCSU’s College of Agriculture and Life Sciences only offered a minor in agroecology, and Schroeder-Moreno encountered resistance to the creation of a stand-alone major in sustainable agriculture. “Putting the words sustainable and agriculture together crossed a line in the sand,” she explains. “It implied that all other agriculture was not sustainable.” Finally, in 2015, she got the green light for an undergraduate major in agroecology and sustainable food systems. “Somehow, they were okay with me putting sustainable next to food systems,” says the 43-year-old, who has seen her typical class size grow from 12 to approximately 100 students, half of them women.

Another indicator of progress? NCSU’s six-acre farm, planted in 2008 to provide agroecology students with hands-on experience, currently serves a number of different classes and student clubs. “Even the conventional programs are teaching integrated pest management and cover crops,” Schroeder-Moreno says. “It’s a big step to move beyond the attitude of, ‘Just spray it.’”

IOWA STATEUNIVERSITY
Ames, IA
Founded as the Iowa State Agricultural College and Model Farm in 1858, this land-grant institution created America’s first graduate program in sustainable agriculture 16 years ago. The school has always emphasized hands-on learning, whether that involved studying a plow in 1934 (above) or evaluating corn seedlings, as undergrads Addison Bidwell and Heidi Hamilton (above, right) did this past fall. Photo courtesy of Iowa State University Library Special Collects and University Archives. 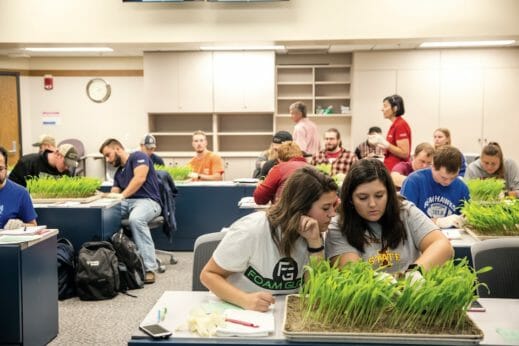 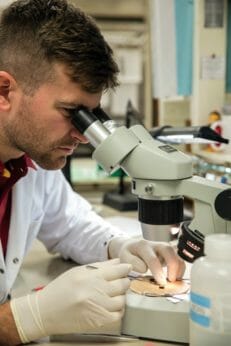 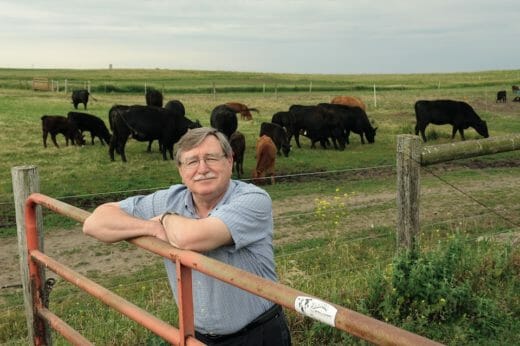 No matter how dedicated the educator, or how hard she or he fights, industrial agriculture often proves a powerful foe. Mark Rasmussen, a tenured professor in the animal science department at Iowa State University (ISU), also functions as the director of the Leopold Center for Sustainable Agriculture, established on campus in 1987 by the Iowa Groundwater Protection Act, which funded the center, in part, through a tax on nitrogen fertilizer. “In the late 1980s, coming out of the farm crisis, the planets aligned, and the state chose to address the water-quality problem with this special initiative and tax,” Rasmussen explains. But in May of 2017, Governor Terry Branstad (since appointed U.S. ambassador to China by President Donald Trump) signed legislation redirecting most of those tax dollars to the Iowa Nutrient Research Center, a newer organization at ISU favored by agribusiness interests. As a result, Rasmussen’s annual budget was slashed from over $2 million to $200,000, and his staff reduced from nine employees to two. 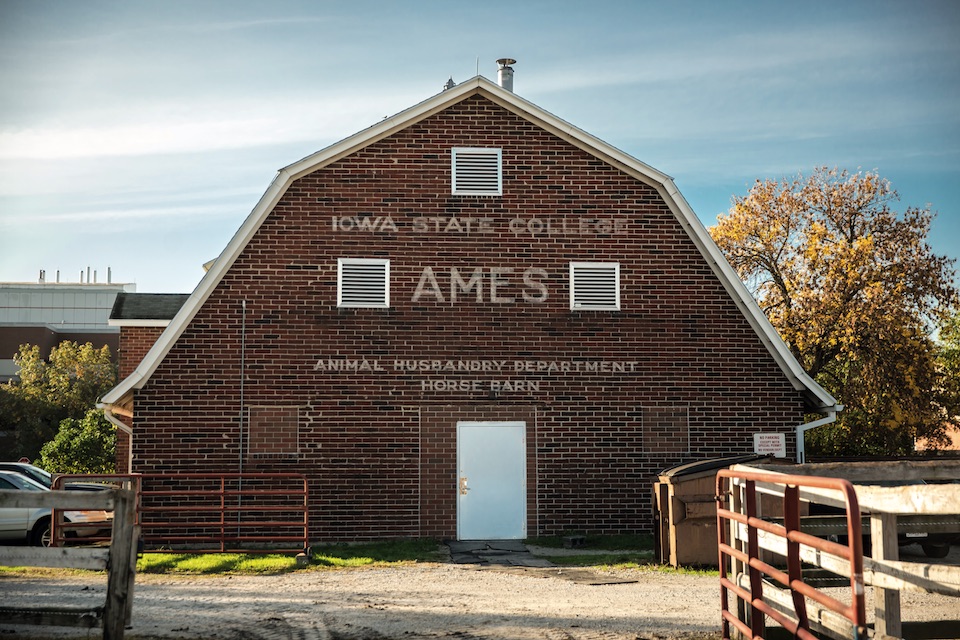 Still, he remains optimistic about the big picture, pointing to Iowa State’s thriving 16-year-old graduate program in sustainable agriculture. New facilities are under construction to keep up with the demand, reports Rasmussen, 65. “The defunding of the Leopold Center is an anomaly, contrary to the overall trends in society.”

One of the few American universities that can claim deeper roots in sustainable agriculture than Iowa State is the University of California, Santa Cruz. Legendary horticulturist Alan Chadwick first arrived on campus in 1967, transforming a brush-covered hillside into a biodynamic garden – the inspiration for today’s 30-acre organic farm, where 21st-century visionary Damian Parr teaches undergrads much more than vocational practices. 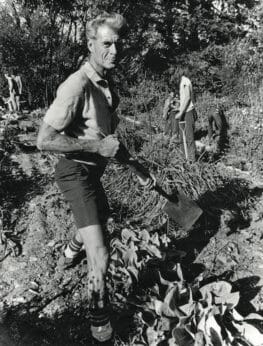 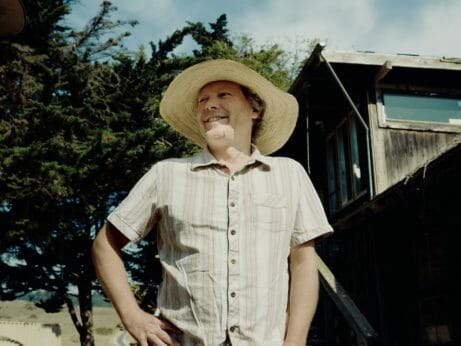 Today, Damian Parr, the coordinator of research and education for the college’s Center for Agroecology & Sustainable Food Systems, encourages undergrads to connect the dots between modern agriculture and societal ills. Photo by David Robert Elliott.

“The food system is fertile ground for deconstructing the forces of oppression – race, class, gender, sexual orientation – that have anchored themselves in American institutions,” Parr says. He encourages students to pursue research projects with real-world social implications, say, how to reform the labor and procurement practices of UCSC’s dining services. Hands-on training in orchard management may open with a lesson in pruning and end with a discussion of farmworker rights at nearby fruit operations.

Parr also aims to overhaul the culturally homogeneous composition of the agroecology program itself. He’s helped develop a new recruitment program that targets high school and community college students from the Latino communities in the Salinas Valley, south of Santa Cruz, with the goal of grooming this more diverse talent pool for graduate-level work and, eventually, faculty positions. “We want minority students to see people that look like them in leadership positions,” he says. “If our enrollment doesn’t reflect the demographics of the state, then we are part of the legacy of oppression and segregation.”

Please send me your Newsletter.

Do you have education system in Canada? I am living at Hamilton