A lifelong tree-tapper, Paul Haldeman considered himself a mere hobbyist - until he convinced neighbor Deanna Nelson to go into business with him. 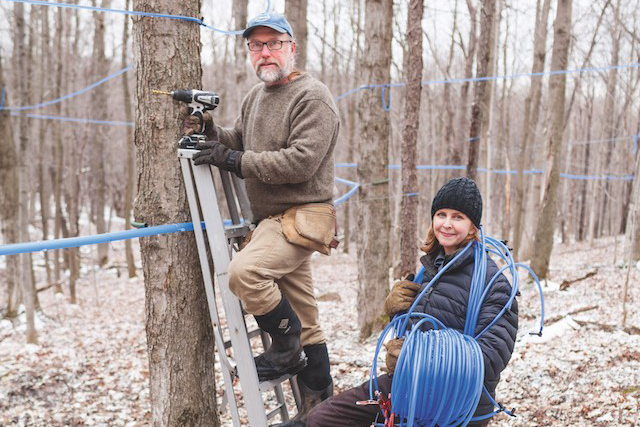 A lifelong tree-tapper, Paul Haldeman considered himself a mere hobbyist – until he convinced neighbor Deanna Nelson to combine the sugar maples on her 188-acre property with those on his 70 acres. “It was a whiskey-induced agreement,” says Nelson, an attorney, of their 2012 decision to go into business together. Syrup had something to do with it, too.

Haldeman had recently built an evaporator out of a woodstove, a seemingly clever hack that wouldn’t sustain a boil. “I couldn’t get it hot enough,” admits the 57-year-old. “But when I gave the syrup to friends, they were amazed.” The low-and-slow method resulted in flavors ranging from spiced rum to peach cobbler. Adds Nelson, 48, “Maple syrup is like the girl next door. Everyone thinks they know her. Getting people to think in a new way has been a challenge.”

Though the duo landed a private-label deal with Beekman 1802 three years ago, they still sell the majority of their syrup online and via small retailers. Haldeman and Nelson hope to expand the operation with the acquisition of 150 more acres in upstate New York. Meanwhile, they’ll keep hitting food festivals, convincing consumers to think beyond “Big Maple” and its rigid standards that forbid notes of, say, citrus or chocolate. “Since when,” asks Nelson, “is chocolate undesirable?”