Arkansas “Ag-Gag” Legislation Could Be Bad News for All Whistleblowers

Arkansas has moved closer to passing a so called "ag-gag" law that would allow business owners to sue whistleblowers. While it's aimed at preventing undercover filming of agricultural businesses by animal activists, it could end up preventing whistleblowers from exposing dangerous or unsanitary working conditions in a variety of industries, including child care and restaurants. 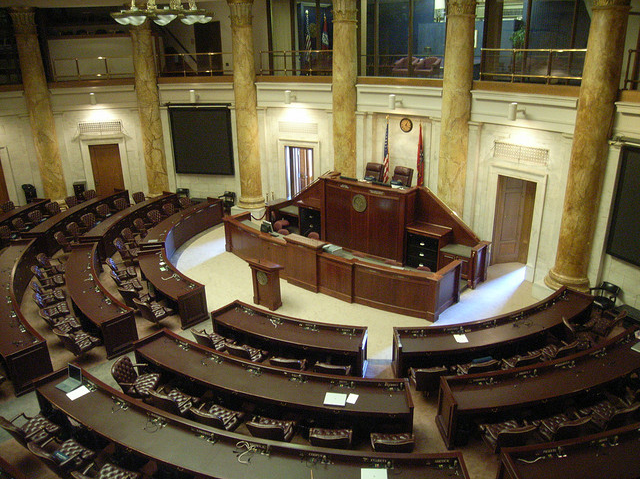 “When consumers learn about these types of laws, it produces a measurable reduction in trust in farmers.”

House Bill 1665, titled “An Act to Create A Cause of Action For Unauthorized Access to Another Person’s Property; And For Other Purposes,” is broadly written, leading opponents to worry that it would prevent whistleblowers from exposing things like abuse at day-care facilities, unsanitary conditions at restaurants and other food-related businesses, and uncovering violations of environmental regulations, among other activities. State agencies, state-funded colleges and universities, and healthcare and medical service providers are not included in the bill.

“This Arkansas bill was written in a way that applies to any non-public area of a commercial property, defined as any area that’s not accessible or intended to be accessible by the general public,” says Kara Shannon, Manager for Farm Animal Welfare at the American Society for the Prevention of Cruelty to Animal. “This language is extremely broad and goes way beyond the bounds of just animal agriculture.”

The bill passed the Senate on Wednesday and is now back in the House, the final step before it goes to the desk of Arkansas Governor Asa Hutchinson. Sen. Gary Stubblefield, R-Branch, a dairy farmer and the Senate sponsor of the bill told Arkansas Online that HB1665 would do nothing to subvert state and federal protections for people who expose illegal practices.

This is the latest legislation known as either farm protection or ag-gag bills, depending on whom you ask. These types of laws have been controversial, with some states ending up in federal court over their passage, including in Idaho, where an “ag-gag” law that criminalized undercover investigations of farming operations was struck down by a federal judge in 2015.

Arkansas is the third biggest producer of broiler chickens and turkeys in the country and this isn’t the first time legislators there have tried to pass this type of bill; in 2013, two anti-whistleblowing measures failed to make it into law. Unlike many of the other previous “ag-gag” bills, this legislation doesn’t criminalize whistleblowing behavior, but rather clears a path for farm and other business owners to sue whistleblowing employees and activists for documenting alleged animal abuse or for revealing other problems. The bill provides not only compensatory damages, but up to an additional $5,00o per day “that a defendant has acted in violation” of the statute. Shannon points out that in the same way that previous bills criminalized whistleblowing activities in order to deter this kind of activity, “these economic repercussions would have the same effect, making a whistleblower really think twice before speaking out because of what they could be facing if they did so.”

Kay Johnson Smith, the president and CEO of the non-profit Animal Agriculture Alliance, which represents the interests of various animal agriculture industries and food producers, tells Modern Farmer that “given the growing number of both undercover videos and break-ins on farms, it’s understandable why this bill has been introduced.” Besides protecting farmers from “campaigns of animal rights extremists who have stated their goal is to destroy animal agriculture” these types of laws also help ensure farms’ biosecurity procedures by preventing unauthorized people from coming onto the property. “At a time when our nation is so concerned about the transmission of animal diseases, such as the highly pathogenic avian influenza, it’s important states take measures to protect their farms, the animals and food production,” she wrote in an email.

Smith says there is no one more concerned than farmers “about ensuring livestock and poultry are treated with care and kept healthy” since they “have chosen to dedicate their careers and livelihoods to raising them.” Many farmers require employees to sign statements agreeing they will care for their animals and report any concern of mishandling or abuse immediately, she says.

While those in favor of these types of laws, especially agricultural industry organizations, argue they protect the rights of farmers, they may have the unintended effect of eroding trust in the farming sector as a whole. A University of British Columbia study from 2016 found that when consumers learn about these types of laws, it produces a measurable reduction in trust in farmers. In regard to this bill, a recent poll by the Humane Society of the United States found that 75 percent of the people polled oppose the legislation,.

“That’s probably why we’re seeing this bill move as quickly as it is. Legislators know consumers want more information and if they wait too long the wave of opposition will get too loud and they might not get the chance to do something,” says Kevin O’Neill, vice president of state affairs for the ASPCA. “It’s clear there’s widespread opposition to these types of bills.”

O’Neil urged the governor to veto the bill, as did the Humane Society. Alicia Prygoski, the public policy coordinator for farm animal protection for the organization, called the bill “a deceptive assault on whistleblowers” that would cover up both child abuse and animal cruelty.

“We’re hopeful that Governor Hutchinson will see how harmful this bill is to Arkansas, and swiftly veto it,” said Prygoski in an email.