Which red meat is the greener choice? 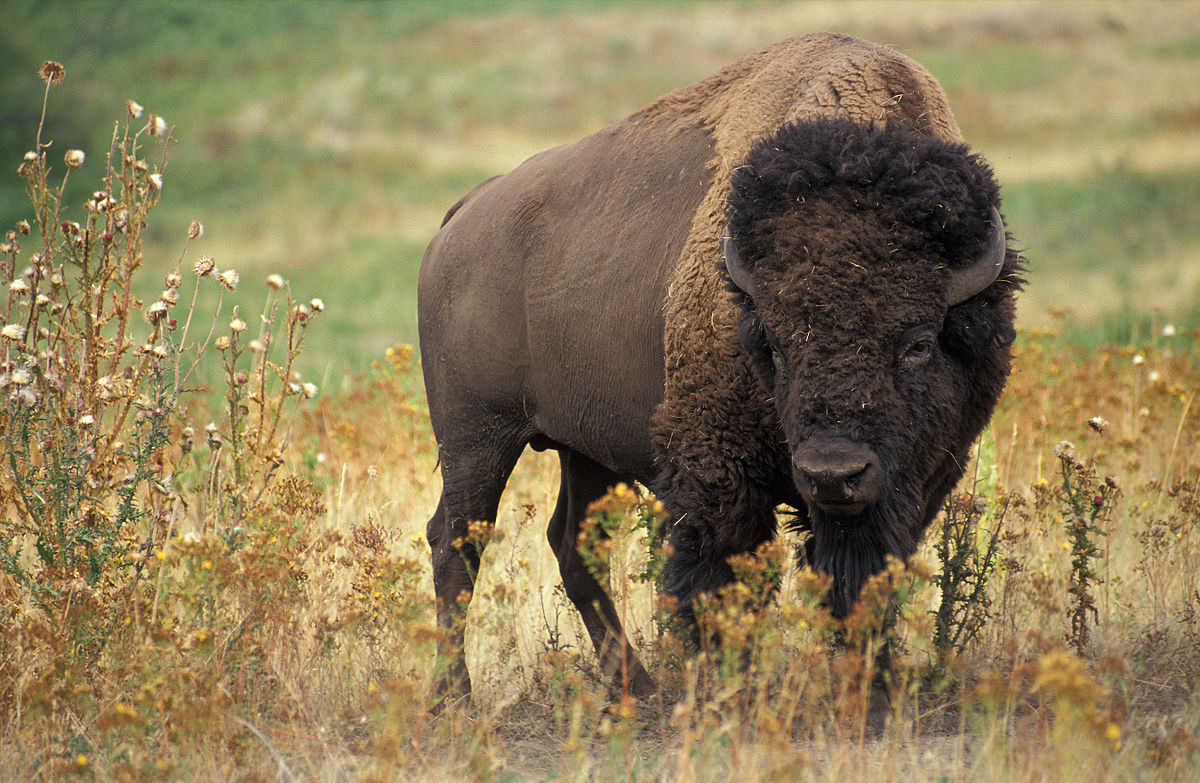 It’s believed that bison cause less trampling and erosion damage to the plains than cattle, that their diet is higher in grasses and thus less damaging to the long-term chances of the plains environment, and that bison poop functions as a natural fertilizer to their habitats.

This all mostly stems from a general idea that bison, being not domesticated and technically, even when ranched, a wild animal, are more in tune with nature, more balanced in their impact than cattle. They are also native to North America, unlike cattle, which were domesticated from Old World animals. “Because bison are a natural part of the North American ecosystem, bison ranching can be a beneficial to the natural environment,” writes the National Bison Association, a promotional group, on its site.

In truth this is all a much more complicated question than it seems. It’s not a very satisfying answer, but the only undeniable conclusion of this question is that bison ranching can be more sustainable and environmentally friendly than some forms of cattle ranching. But it’s also likely true that on the whole, a random sampling of bison meat is probably more sustainable than a random sampling of beef.

The existence of beefalo notwithstanding, bison and cattle are significantly different animals. The primary source of those differences is that bison are not domesticated, which has its pros and cons. The positive elements are that bison are generally acknowledged to be the hardier species, without requiring shelter even in winter. That can reduce the amount of fuel and manufactured or gathered food a bison needs. In general, they also need less medical attention. From Penn State’s guide to bison: “Because of the bison’s rugged nature and calving ease, a veterinarian’s assistance is rarely needed.” That can reduce the need for antibiotics, which can in turn theoretically reduce the rise of antibiotic-resistant bacteria.

Bison’s impact while tramping around the prairies is a bit more nuanced. Studies indicate that cattle generally prefer to hang out around trees and water sources much more than bison do; other studies indicate that the presence of cattle around water sources can have an extremely negative effect on the cleanliness and biodiversity of these environments. That said, Chris Helzer at the Prairie Ecologist notes that, well, this isn’t necessarily how this has to go; it’s perfectly possible to simply fence in cattle so they don’t spend too much time at a water source.

When allowed to graze, bison and cattle tend to prefer different roughage. Bison like to eat perennial grasses, while cattle, though they’ll also eat grasses, like to eat forbs – a term used to refer to, often, wildflowers like clover, milkweed, and sunflower. It’s generally assumed that subsisting on grasses is preferable to forbs; forbs are more rare, slower to grow, and support vital other micro-environments for pollinators like butterflies and bees. So bison are obviously preferable, right?

Well, that’s not actually that clear. Helzer co-authored a study in 2005 that examined a hypothesis that the diet differences between bison and cattle are formed less by basic preference and more by the way they’re ranched, specifically the density of animals. Bison are almost always ranched outdoors, in pasture, with a fairly low concentration. Cattle? If they’re outside, they tend to be crowded in very densely. This is kind of a microcosm of the answer to the basic question of bison vs. cattle: It’s not necessarily that bison are inherently more sustainable, it’s that cattle very often are ranched in an unsustainable way.

I think there should be an indictment of cattle ranching in tropical and subtropical previously forested areas of South America. A lot of it is done by drug lords looking to diversify and legitimize their illegal profits. A big source of tropical deforestation. There are increasing calls to reduce beef consumption as one response to global warming. Expanding bison ranching would be a great U.S. homegrown step in the right direction. I don’t know how far this could go and what barriers we would come up against.

What if we had only bison and undulates, on BLM land, and sold culling tags to “ranchers” at a rate that maintained the populations… They could butcher the animals on the spot with mobile butcher units, leaving remains for the Condors and other wild life. It would bring a bit more “wild west” into the Western US, and possibly support more local economy.

May sound like a silly question, but curious about bison gas compared to cow gas. I’ve heard that a lot of the gas from cattle is bad for the ozone in the form of methane gas. I know grain fed cows are not as healthy as free range grass fed cows. Any thoughts?