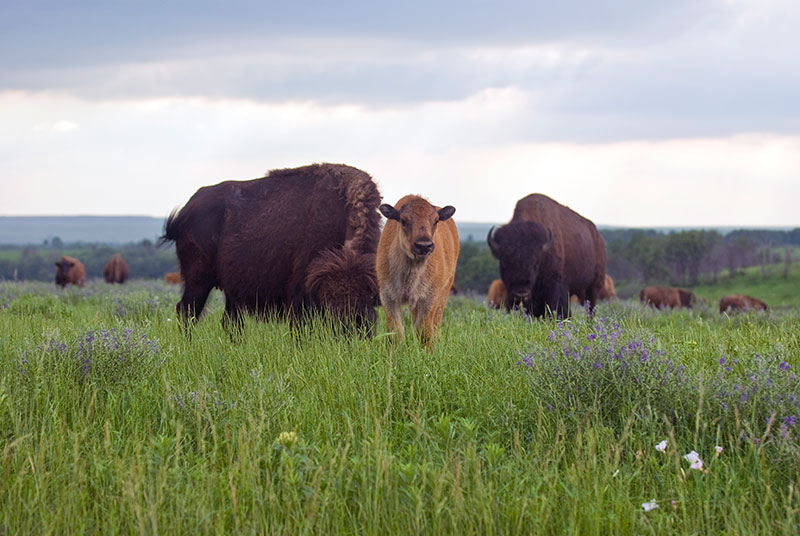 Most importantly, bison made sure the prairie stayed a prairie, rather than reverting to forest, which offers little to eat for such large herbivores. Grazing – along with fires (both naturally-occurring and intentionally set by native peoples) – are the two forces of nature that conspire to manage grasslands the world over.

While cattle and other domesticated livestock are often used often used to manage grasslands in other parts of the world, bison appear to be the species best-suited to controlling the North American prairie that they’ve coevolved with. In fact, a 1976 experiment in South Dakota demonstrated that bison are the prairie’s go-to: Cattle were grazed on one side of a fence and bison on the other side. Ponderosa pines soon sprouted and grew into a canopy on the side with the cattle, while the bison chomped down on the seedlings as they sprouted on their side and prevented a forest from becoming established.

Grasslands once comprised 40 percent of the North American landscape, but after bison were hunted nearly to extinction in the 19th century, the prairies of the heartland were converted to farms and cities on a vast scale: 99 percent of tallgrass prairie and 68 percent of mixed-grass prairie have disappeared, making grasslands North America’s most endangered ecosystem. As the keystone species of the prairie – that is, the one who holds it together for all the other species – bison are being actively reintroduced to conservation areas throughout the Midwest in an effort to bring degraded prairie ecosystems back to life. Here are five ways they do it.

Not only do bison munch out tiny seedlings of trees as they appear, they take care of any that begin to mature and threaten to shade out the grass. They have several methods for doing so: Bison like to eat bark, often leaving trees girdled at head height; with the bark stripped, trees can no longer transport water and nutrients to the canopy, and quickly die. A similar effect occurs when bison rub against mature trees to help remove their winter coat, as well as from “horning” – a common bison behavior where they rub their horns against the bark of conifers to cover them in sap, presumably as a form of insect repellent.

Ecologists have found that prairie grasses produce about one third more new vegetation each year than what actually decomposes. If all of that decaying grass was left in place, it would form a thick thatch, restricting the germination of small-seeded plants and the exchange of gases in the soil, conditions which favor woody species over grasses (that’s why we have to mow, aerate, and de-thatch our lawns to keep them healthy). Historically, periodic fires would burn off some of the excess thatch, though bison played an important role in consuming top growth in the grasslands, keeping much of the biomass below ground in enormous root systems – which is why Midwestern soils are so fertile.

3. They’re better than a fertilizer factory

Nitrogen, the most essential nutrient for plant growth, is delivered to grassland plant communities in copious quantities through the urine and feces of bison. Without grazing, much of the nitrogen contained in grassland plants volatilizes and is lost to the atmosphere as new top growth dies and decays each year, rather than returning to the soil. Grassland fires also volatilize nitrogen as the vegetation burns. But when bison and other grazers eat grass, the nitrogen is concentrated through the digestive process, and eliminated out the other end in a stable form that plants can make use of.

Bison are considered preferable over cattle for managing America’s grasslands, in part because they are picky eaters. While cattle graze on pretty much anything in sight, bison have a strong preference for grasses over forbs (broad-leafed species, including wildflowers and herbaceous plants). Grasses thrive on periodic grazing, whereas forbs are more apt to die out when subjected to grazing. Only a handful of native grasses comprise most American grasslands, but upwards of 400 species of native forbs are responsible for the tremendous biological diversity of these ecosystems, which bison help to encourage by not eating them.

5. Where bison roam, other wildlife follows

By managing vegetation, bison effectively manage the habitat for a majority of other prairie wildlife. The Wildlife Conservation Society estimates that 42 native bird species are dependent on grasslands historically maintained by bison, virtually all of which nest in the ground hidden from predators in the mosaic patchwork of grass. Prairie dogs, another icon of America’s grasslands, take up residence in “bison lawns” – areas routinely cropped by these enormous herbivores – as they can better keep watch for predators than in the taller grass of ungrazed areas. In an ecological ripple effect, the underground “towns” of burrowing prairie dog packs, are known to provide habitat for an additional 200 species.