A French Sailor. A Spanish Hen. A Global Adventure.

It's the story that launched a thousand "Chicken of the Sea” jokes. 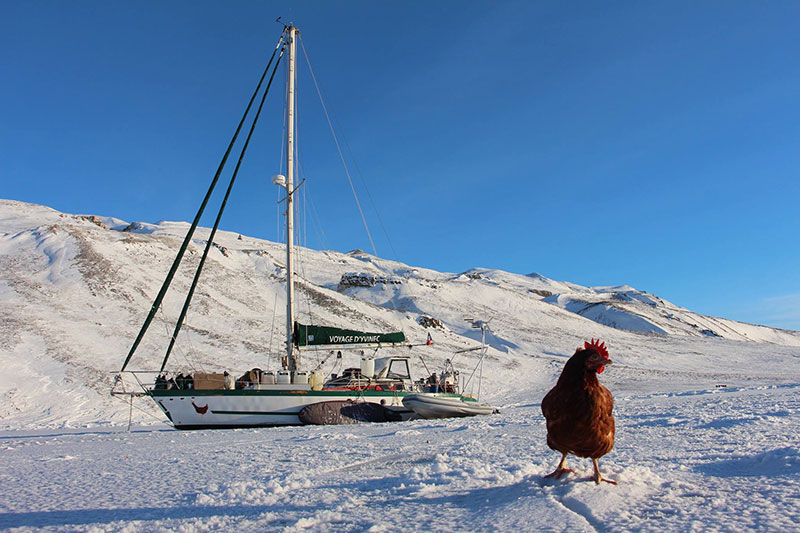 She is the first mate to 24-year-old French sailor Guirec Soudée. The duo have spent much of the past two years on the high seas, sailing from the warm waters of the Caribbean all the way to chilly Greenland. Along the way, they’ve made stops in St. Bart’s, Virgin Gorda, Bermuda, and elsewhere.

And because nothing really happens unless it’s documented on social media, there are thousands of people following Soudée and Monique’s voyage on Facebook (more than 80,000 “likes”), on Instagram (18.7k followers), and via their website. Soudée maintains this lively online presence with the help of a satellite phone; he uses it to send photos and updates to a Swiss friend, Virginie Nolen-Laissy, who uploads everything for him. She also wrote a detailed account of their trip for Yachting World.

Growing up seaside in Brittany, then working on a shrimp boat as a teen gave Soudée a love of the sea and a serious case of wanderlust. He set off on a round-the-globe adventure in November 2013 but found solo sailing to be lonely. By May of 2014, he was docked in the Canary Islands, a Spanish colony, and he received Monique – then only a few months old – as a gift. It seemed like kismet: Here was the perfect low-maintenance companion who could also provide food.

“I didn’t speak any Spanish and she didn’t speak any French,” Soudée told the BBC. “But we got along.” Friends warned the sailor that a hen at sea would be too stressed to lay eggs, but Monique adapted quickly and has been a steady producer. (Still, how many omelets can one person eat?) She has even survived more than one near-overboard experience and goes below deck when waters get choppy. Soudée plays up the hilarity of their partnership by threatening to eat Monique if she becomes annoying (he has even posted a pic of himself eyeing up a cooked chicken) and telling the BBC, “Compared with people, she doesn’t complain at all.”

This saga might seem like just a gimmicky stunt, but Soudée hopes that people take away a deeper message, too: Follow your dream, no matter what. Dogged determination can make up for limited resources. And if that sounds like an ideal theme for a kids’ book, Soudée and Nolen-Laissy are way ahead of you. They’ve already co-authored The Transatlantic Voyage of Monique, released this month in French. An English version is in the works, as is a TV documentary.

Not that it’s all been smooth sailing: Soudée vowed to spend the winter of 2015-2106 off the grid in Greenland’s Disko Bay. He loaded up on rice, seed, and fuel (he planned to fish for food) and prepped the boat using money he raised via crowdfunding. Then, just one day into his isolation, Nolen-Laissy got word that Soudée’s dad had passed away. Incredibly, she managed to enlist an Inuit fisherman to deliver the sad news. After that, Soudée and Monique were unreachable for long stretches.

Until they emerged not long ago and posted a photo of themselves, sun-drenched and lying on terra firma. “After the hard winter we have just experienced and the freezing temperatures my beloved Monique and I are happy to share a wonderful brake [sic] time,” the caption read. “Finally, we begin to regain color!”

Up next: A trip through the northwest passage, to the Pacific Ocean and beyond. C’est magnifique!