Understanding the social hierarchy of the flock is one key to raising healthy, happy chickens. 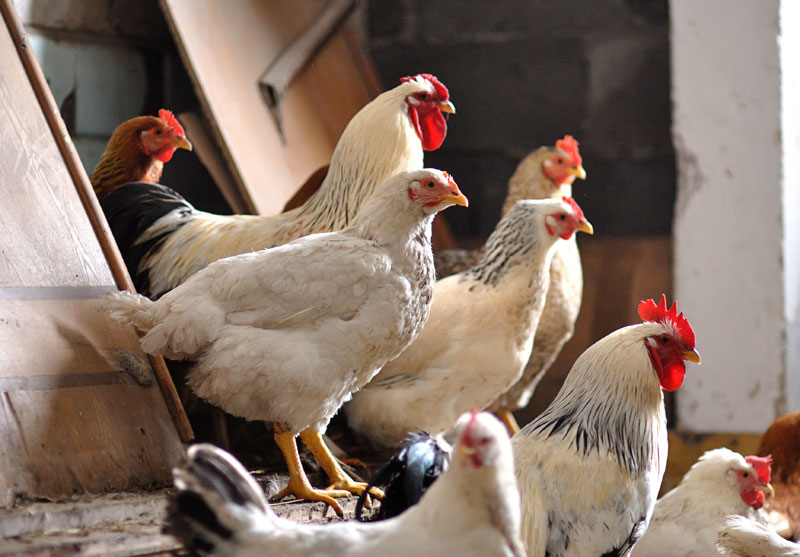 But they do have their own ways of maintaining social order, which seem to have served their needs well enough over millennia. It’s a bit authoritarian by our standards, but the pecking order – in which each bird has a rank in the top-down hierarchy of the flock – is the way in which chickens govern themselves.

The pecking order is, literally, determined by pecking. Bigger, stronger, and more aggressive chickens bully their way to the top of the flock by pecking the others into submission with their pointy beaks. First they strut about, fluff their feathers, and squawk, but if that doesn’t get the point across, they peck. It can get violent. Sometimes blood is drawn; occasionally, the opponent is killed.

Purpose of the Pecking Order

Pecking order rank determines the order in which chickens are allowed to access food, water, and dust-bathing areas. It determines who gets the most comfortable nesting boxes and the best spots on the roosting bar. The good news is that, at least among a flock of chickens born and raised together, the pecking order is established early on and the birds live in relative harmony, with only minor skirmishes now and then to reinforce who is in charge.

The chicken at the top of pecking order has a special role to play in the flock. Because they are so strong and healthy, it’s their responsibility to keep constant watch for predators and usher the others to safety when a circling hawk appears or a strange rustling is heard in the bushes nearby. The top chicken is also expected to be an expert at sniffing out food sources, such as a nest of tasty grubs under a fallen log, or a bunch of kitchen scraps that the farmer dropped on their way to the compost pile. Even though the top chicken has the right to eat first, he or she usually lets the others feed, while keeping a vigilant watch for predators, and dines only after everyone else has had their fill.

Gender dynamics figure heavily in the pecking order. If a rooster is present, they are nearly always top chicken. In a female-only flock, the strongest hen assumes that role, governing over her girls just as effectively as a rooster would, though, arguably, chicken society is a little more civilized without roosters around. Roosters copulate with the hens non-stop throughout the day in what is generally a pretty violent act of domination. Too much sex and a hen will end up with a sore back and missing tail feathers, which makes her susceptible to host of health problems. Furthermore, if there are too many roosters and not enough hens to go around, the social order of the flock easily descends into reckless barbarism.

This is where the farmer has an important role to play in managing the social dynamics of their flock effectively. As a general rule, aim to have one rooster for every 10 to 12 hens. Flocks of less than six hens shouldn’t have a rooster at all – otherwise the frequency of sex will weigh on the hens’ health. Roosters tend to be more aggressive than hens about climbing the social ladder, so maintaining a good ratio also keeps the roosters from fighting excessively among themselves. And, as many chicken farmers have observed, chicken society seems to divide itself naturally into harems of 10 or 12 hens, each presided over by one big rooster.

There are other ways that chicken owners can help to maintain harmony in the flock. The less space chickens have, the more violent they are in establishing and maintaining the pecking order. Four square feet of space per bird inside the coop and 8 square feet outside in the chicken run are the bare minimums. Most sources recommend twice that much space if you have roosters around.

Coop design also matters. Cut down on crankiness by hanging feeders and waterers in the middle of an open area, rather than in a corner, so there is plenty of room for the birds to maneuver. Three inches of feeder and waterer space per chicken is the minimum, and if you have more than a half-dozen birds, use multiple feeders and waterers with lots of space in between – having one inside the coop and one outside is ideal. Likewise, you need at least one nesting box per four hens and 8 inches of roosting bar per bird to keep squabbling to a minimum.

The bloodiest battles occur when a new chicken or group of chickens are introduced to an existing flock – this upsets the pecking order, which must then be re-established. If the new chickens are younger or are substantially outnumbered by the existing flock, the consequences can be especially grave. Chickens have the gory habit of ganging up on any chicken that is bleeding and pecking at the red wound. If the wounded chicken isn’t separated from its assailants, it may be pecked to death. The other chickens then eat it.

To prevent these civil wars and head off the cannibalistic tendencies of chickens, experienced chicken farmers try to gradually introduce new chickens to each other. The most common method is to fence off an area inside the chicken run for the new chickens, so everyone can get their aggression out without causing physical harm. After a couple days, remove the fence and let them mingle. Keep an eye out, though, and remove bleeding chickens before they are killed. After you nurse them back to health, try easing them back into the flock a second time.

One last thing: Humans are also part of the pecking order. Hens tend to respect humans as the default leader of the flock, but some roosters will challenge that wisdom and seek to overthrow the farmer from the top of the pecking order. Aggressive roosters range from pesky to dangerous – small children have suffered serious pecking wounds on their face. One option is to put on thick leather gloves and pin an overly aggressive rooster to the ground every time it comes after you, which usually establishes dominance and puts an end to the pecking. But if that doesn’t work, most farmers opt for plan B: the stew pot.

Help please, I’ve had two of my hens start a nasty aggressive fight drawing blood , it’s never happened before now!, I’ve treated the injury’s and separated them. How long before I should reintroduce them back into the flock please?

I had a flock of 7 hens around 9 months and introduced a flock of 9 girls and 1 rooster they are around 6 months old. The 3 tops girls who are Plymouths terrosize the rest of the flock and screech at the rooster. He runs from them constantly. He has respect from the other 4 hens and he does not run from them but does keep them away from his group politely. He is pretty calm and doesn’t like to show to much authority for instance when trying to mate his own flock if they scream out he backs… Read more »

Thank you for this blessing.

How many times a day should chickens be fed? How much can they consume? Will they stop eating or will they easy until they die?

We have an all female flock of older chickens that we acquired 3 years ago when we bought this property. The top chook is Henny-Penny and until an encounter with a neighborhood dog in January this year, had no health issues. Other than the visible wounds, the dog did some damage to her foot that changed how she walks… but she learned to adapt and get around just fine. However, today, something happened and she no longer wants to put weight on it, and for the first time since we’ve had her, she put herself in one of the nesting… Read more »