Farm Confessional: How I Learned to Stop Worrying and Love the Foie

A look at the reality of U.S. foie gras production. 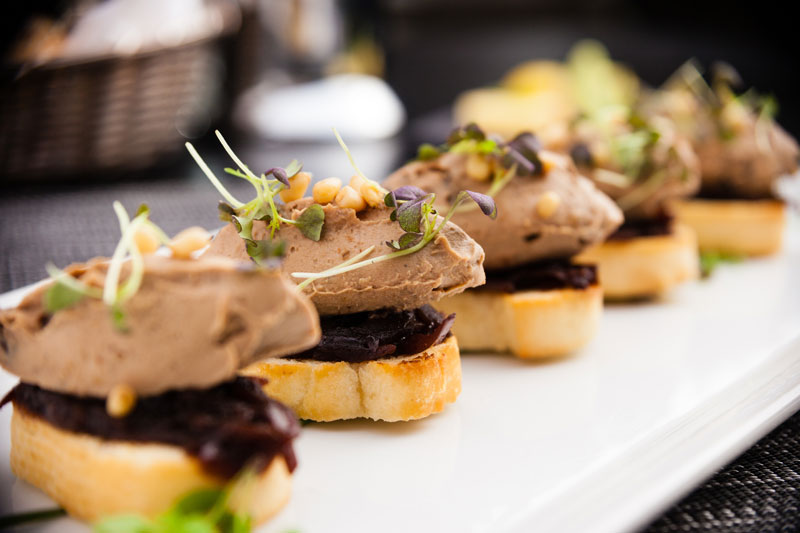 While a lamb tataki hot pot was the most memorable dish, it was the menu’s “Humane Foie Gras” at the now closed Cyrus restaurant in California that cued an email conversation between Chef Douglas Keane and myself. I felt the use of the word “humane” was purposely deceptive, as our waiter had informed us that the infamous forced feeding process (gavage) was still used to produce the foie. Chef Keane actually began his retort by thanking me for not effectively issuing him a death threat, as animal rights activists had occasionally been prone to do.

I am a nutrition and applied physiology professor at a Catholic university, and as such, I frequently challenge my students to not base food choices solely on internal ramifications (their health or sensory pleasure), but to balance those with external considerations (how the animal was treated on the farm or the food’s environmental consequences).

When I started this job in 2006, the conscientious carnivorism movement was starting to take hold, and my routine avoidance of meat came to an abrupt end once I began exploring the New York City fine-dining landscape. Previously only cooking for my parents or consuming too much alcohol would have lead me astray, but the greater availability of more humanely sourced meat provided an opportunity – and truthfully an excuse – to return to omnivore status with a lighter conscience. But through years of irresponsibly expensive meals, foie was a menu item I never got comfortable with; I used to even have a “Ban Foie Gras” poster hanging on an office wall.

Foie is typically made from the liver of a Moulard (Peking and Muscovy hybrid) duck, although geese or non-mule ducks are still used in minor proportion outside the U.S. In its poorest expression, foie is to mediocre chefs what truffle oil is to mediocre home cooks; that is, a “Band-Aid approach” for the undeveloped flavor of primary ingredients. In its ultimate expression, like the thin layer between a toasted baguette and thinly pounded yellowfin tuna at the three Michelin star Le Bernardin, it provides an incomparable taste and “mouth feel.”

But through years of irresponsibility expensive meals, foie was a menu item I never got comfortable with; I used to even have a “Ban Foie Gras” poster hanging on an office wall.

Last year, to the delight of Californian chefs and deep-pocketed epicureans alike, a U.S. district judge reversed what had been the first U.S. state-wide ban on foie sales. Although the reversal is not permanent and currently under appeal, it delivered a significant blow to activists who touted the law’s passage as a major achievement in the fight for improved farm animal welfare standards.

I had long been intrigued by a dichotomy in the debate over foie. Chefs, who anecdotally seem far more likely than animal welfare activists to have witnessed gavage in person, tend to view the process as a trumped-up issue; on the other hand, activists regard the process as one of the cruelest practices in modern animal farming, perhaps second only to veal crating. During our conversation, Chef Keane contended that if I saw the process for myself, I would not think it’s problematic. Being an armchair activist, I decided to finally see what I had been quick to condemn, although frankly it was with the intent of writing a critical piece.

Attention from activists has always focused on the gavage during the birds’ last weeks of life. This bizarre form of overnutrition results in a fattened liver 10 times its normal size. Gavage is nothing new in farming; drawings exist showcasing the forced feeding of geese, an Egyptian elite delicacy, from approximately 4,500 years ago. Roman written texts, including Second Century B.C.E. farming manuals and Pliny the Elder’s famous Naturalis Historia in 77 C.E., demonstrate the commonality of gavage-produced foie production; even Marcus Gavius Apicius, the legendary Roman gourmand, wrote of fattening geese with dried figs. There are conflicting theories as to how foie production continued through the Dark Ages and into the Renaissance, but the dominant, though poorly supported, contention is that Jews kept the process alive as geese provided a kosher-friendly source of dietary fat.

Currently, gavage entails inserting a feeding tube two to three times a day to drop – or at some non-U.S. farms shove via a pneumatic pump – a corn-based feed down the bird’s throat for two to three weeks. Each feeding lasts about 15 seconds, with slight variation depending on the feeder. Without question, it is an easy practice to vilify with words, still pictures, and carefully selected video. 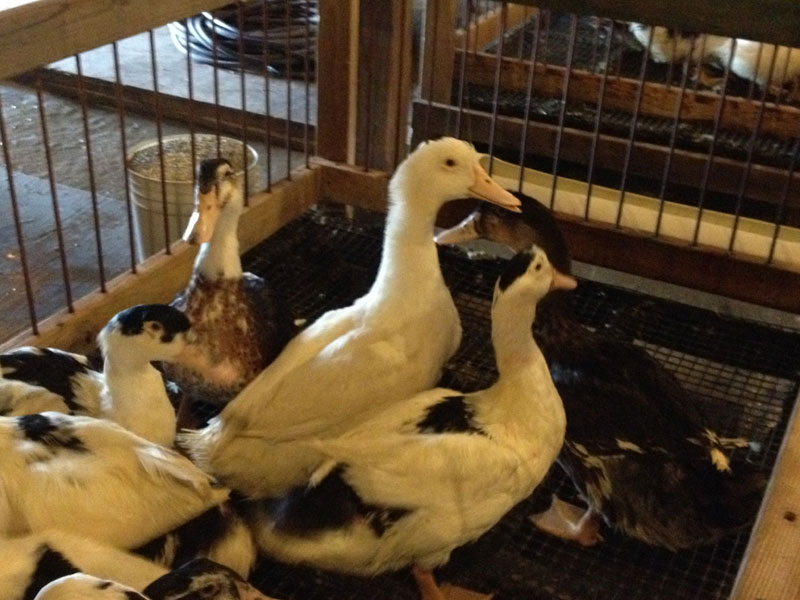 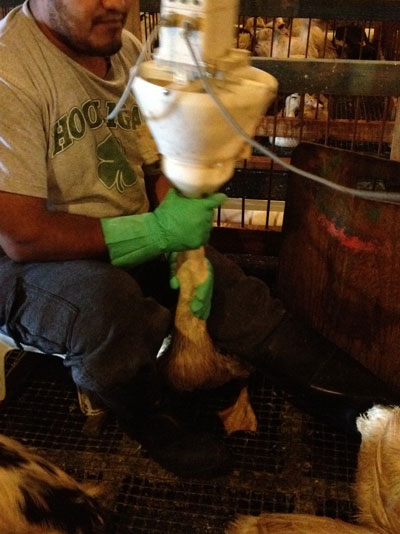 Critics of gavage cite esophageal problems, avoidance behavior towards the feeders, increased stress, and liver dysfunction. The European Union’s Committee on Animal Health and Welfare declared that the practice is indeed detrimental to the ducks’ welfare; however, the American Veterinary Medical Association – which has a general reputation for favoring the food industry – states that few adverse effects are evident but acknowledges that risks including secondary infections and locomotion problems from obesity exist.

Marcus Henley, the lead farmer and ironically a vegetarian, not only provides a standing invitation to see the process in person but encourages you to bring your camera.

At the risk of suggesting that all maladies are visible to the naked eye, the ducks did not indicate much besides indifference during gavage upon my visit to Hudson Valley Foie Gras farm, the preferred foie source by U.S. Michelin-approved chefs and home to 100,000 ducks at any given time. In a world typically accessible only through deception and hidden cameras, Marcus Henley, the lead farmer and ironically a vegetarian, not only provides a standing invitation to see the process in person but encourages you to bring your camera.

Whether from conscious intent or honest mistake, activists often resort to inaccurate talking points or publicizing outdated practices on foie farms such as the immediate “recycling” of unneeded female ducklings via industrial blenders (envision a small auger and you’ll be close), although this is still common practice for male birds on larger poultry farms. (Note: Only males are used for foie, just like only females are typically used for chicken.) Individual cages are not utilized during gavage in the U.S., and are being slowly phased out globally since they generally are considered a cruel practice by farmers and activists alike. Ducks undergoing gavage do show avoidance behavior towards their feeders, but four-week-old ducklings who have never been force-fed show the same behavior when you come within 30 feet of them, indicating that this is simply a duck’s nature as opposed to learned reaction. 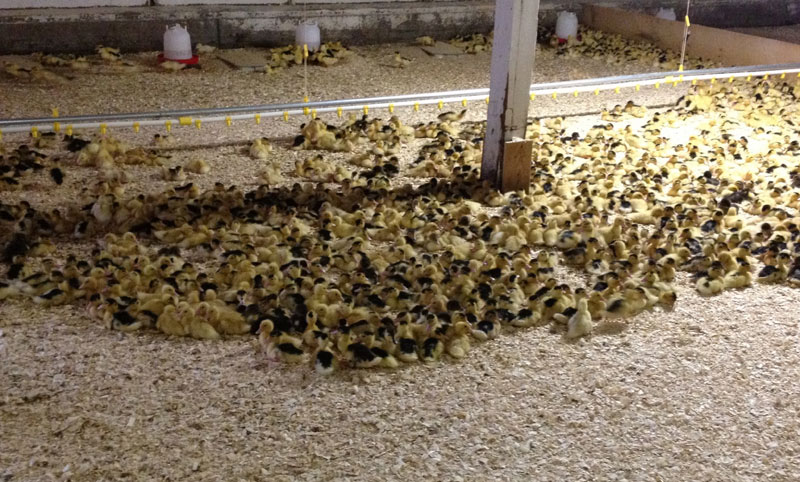 Seventeen years ago, Daniel Guémené, an animal scientist at the French National Institute for Agricultural Research, demonstrated that stress levels among waterfowl measured via hormonal responses were no greater during gavage periods except for the initial feeding. It appears that simply handling the birds causes a greater stress response. I can verify the ducks visibly dislike being handled, as well as being alone if they are first to be fed and are therefore isolated from the flock, but this only lasts a few seconds.

The most common human reaction to gavage is to envision the same process performed on yourself, but this is a largely a futile exercise. For one, waterfowl have no gag reflex; two, the cell type that dominates the human esophagus is not similar to that of a duck, whose throats are highly durable since they have no teeth. Natural hyperphagia (overeating) in ducks may result in up to 750 grams of food ingestion over 24 hours, which is the same amount fed at the farm. In fact, the ducks at Hudson Valley Farms are never fed in a single feeding (250 grams) more than ducks during their feasting season may consume if the food is available. It should be noted that the conditions and practices at Hudson Valley – or at the slightly smaller but procedurally similar La Belle Farms (the only other foie farm in the U.S. and a few miles down the road from Hudson Valley) – are not necessarily representative of farms outside the U.S., most of which are in France, which produces almost 80 percent of the global foie supply.

However, problems do remain at Hudson Valley in regards to what many would consider humane animal farming. Beyond the duckling stage but prior to gavage (five to 12 weeks old), the birds’ living conditions are indeed cramped. Henley states a 10-square-feet-per-duck average, but given the density and eye-watering ammonia smell from accumulated duck feces, it seems hard to believe that somewhere north of five feet wouldn’t be more accurate. The conditions are even tighter during gavage: Each duck gets slightly more than two square feet – which admittedly is roomier than the half-a-square-foot egg-laying hens enjoy. Ducks spend their final two weeks during gavage on a grated floor which can cause foot dysfunction as they rapidly gain weight. 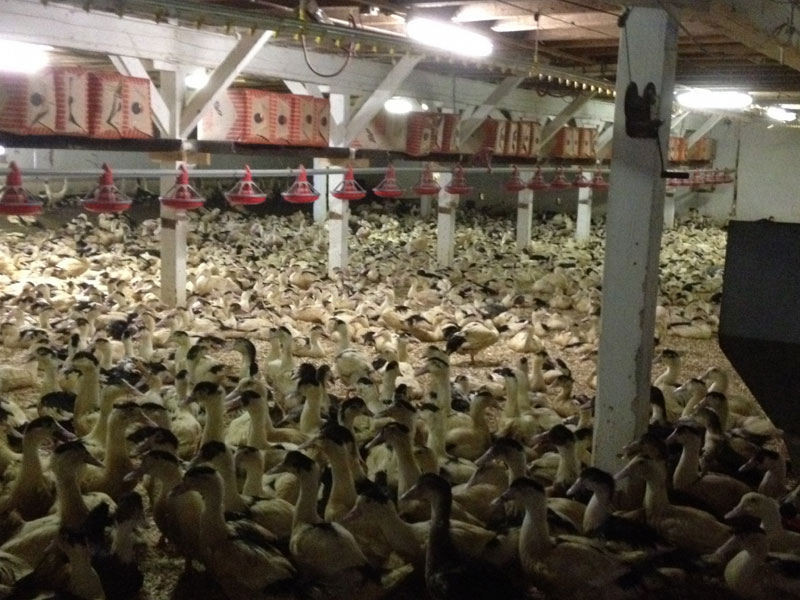 Ducks (aged five to 12 weeks) spend most of their lives in spaces similar to this. Beau Kjerulf Greer 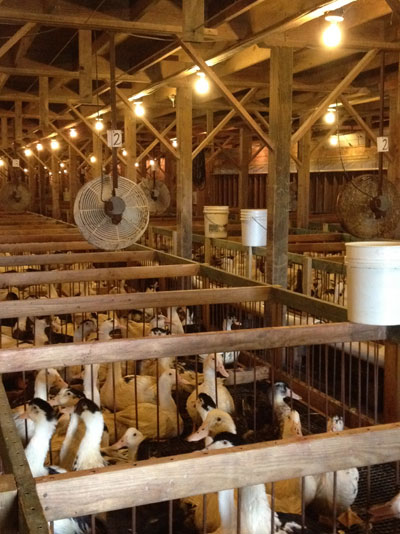 Foie defenders are not immune to their own lapses in sound argument either. If you use the pre-slaughter mortality figures (approximately 4 percent according to Henley) to defend a controlled farming system over the natural environment, you would be obligated to defend large zoo animals in cramped conditions. Perhaps the lamest contention is that a national foie ban would cause an increased price of duck products; considering that duck-fat French fries carry the moniker for “best idea in theory but disappointing in reality” menu item (aside from pumpkin beer), the average American could probably press onward.

Occasional victories, whether symbolic or not, are needed in any social movement to keep the base active and to galvanize recruitment efforts. But ultimately, with millions of broiler chickens and egg-laying hens on U.S. farms alone, I left Hudson Valley Foie Gras questioning why activists place inordinate focus on about 20,000 ducks at any given time undergoing a process (gavage) that may not be as harmful as advertised. There seem to be more appropriate targets for activists’ financial resources given the well documented conditions of large-scale poultry farms, in addition to their sheer volume. (Assuming average reading speed, more than 9,000 chickens have been slaughtered in the U.S. since you began reading this article.) Whether by working with fast-food chains or other large buyers to further enhance minimum welfare standards from suppliers or challenging the suppliers themselves, a financially daunting legal challenge, there are multiple avenues that may be more fruitful for resource-limited non-profits than legislative wins over a cottage industry.