The Sahara Desert and The Midwest Have One Thing in Common: Shrimp - Modern Farmer
Food & Drink

The Sahara Desert and The Midwest Have One Thing in Common: Shrimp 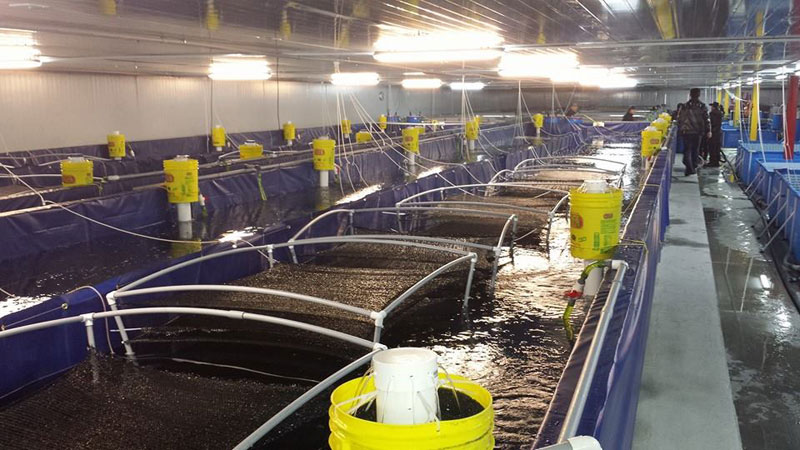 But here’s a bit of good news: There’s a growing movement to raise shrimp using a method that avoids a dangerous cocktail of pesticides, antibiotics, bad bacteria, and all the other negative consequences of high-intensity fish farming.

And, strangely enough, farms using this highly-touted prawn aquaculture system are opening where you’d least expect them: the Sahara Desert.

Last January, Algeria celebrated the official dedication of its Shrimp Cultivation Research Center, a project funded and organized by the South Korean government as part of a international development program. The facility is the size of 12 soccer stadiums (more than one million square feet), and since launching this past October, has produced more than one thousand pounds of Pacific white shrimp product in this arid climate.

Shrimp is an expensive protein in Algeria: One kilogram costs 10 percent of the average monthly wage. The goal of the center is to offer affordable access to shrimp year-round, and, according to South Korean news reports, the Shrimp Cultivation Research Center plans to open dozens more Saharan farms in the near future.

The idea of a desert shrimp farm clearly raises questions: Where does the water come from and how is the process not completely wasteful? The Algerian shrimp farm taps a salty water source, which shrimp need to survive, from deep below the Sahara. Using a fairly recent innovation call biofloc, the farm recycles 99 percent of the water it sucks up from the desert aquifer.

The idea of a desert shrimp farm clearly raises questions: Where does the water come from and how is the process not completely wasteful?

Biofloc is promoted internationally by Israeli research and creates a nature-mimicking poop loop in indoor pools where shrimp grow to market size. Microorganisms introduced into the aquaculture environment gobble up shrimp waste and detoxify it, zooplankton feed on those microorganisms, then the shrimp feed on the zooplankton. One big happy family of waste eaters.

Unlike typical shrimp farming operations – where water is dumped, sending effluent rushing into rivers, lakes, and groundwater – every time a biofloc farm rears a load of shrimp, filters clean the water, making it reusable for the next batch. What’s filtered out remains in use, becoming food for microorganisms and, eventually, shrimp. Because nutrients are created in the waste loop, the need for shrimp feed (fish meal) can be cut by 50 percent, if not more.

While a shrimp farm in the world’s largest desert raises eyebrows, biofloc-driven operations are popping up in a host of land-locked locations, too, including the Midwest of the U.S.

Dairyland Shrimp opened in 2014 in prime Wisconsin cow country. Immediately, the biofloc farm did gangbusters business, selling out months in advance for harvests of shrimp that take 120 days to mature. Demand so outpaces supply that the company had to put local restaurants on a year waiting list. Over in Minnesota, Northern Tide Farm has been just as successful with indoor saltwater shrimp farming by using the same technology. 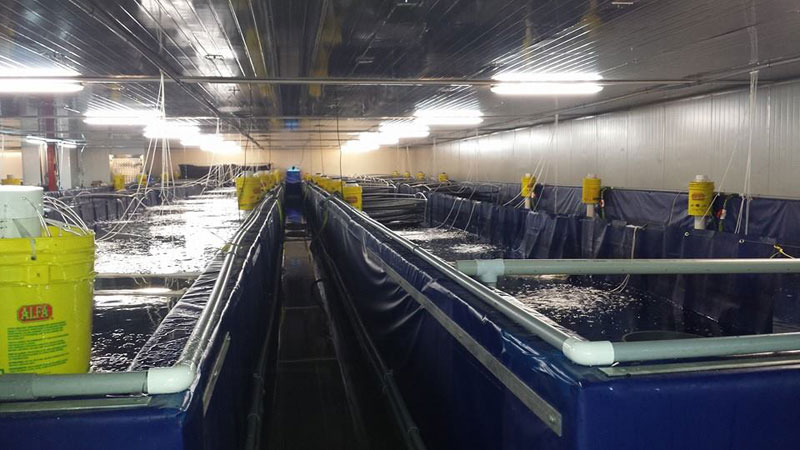 New inland shrimp farms, though, are betting on biofloc to help increase yields and boost overall production. But the setup isn’t cheap. The Algerian shrimp center cost $5.6 million to start. Supplying power is an expensive problem as well: Aquaculture technology eats up watts by the millions, and cold-climate shrimp farms must heat their indoor environments to tropical-esque temperatures. Belize Aquaculture in South America, considered the world’s largest indoor shrimp farm before it closed in 2010, installed its own generators to power its water filtration and aeration systems.

Once the system is installed, indoor shrimp farming, even on a small scale, requires constant maintenance to keep all the biofloc microbes in the right balance, says Forbes Adam of Dairyland Shrimp in Wisconsin. “It’s a real juggling act to get your water quality perfect,” he says. But it’s worth it since demand is huge and only increasing.

As consumers request safer, habitat-friendly, and humane sources for shrimp, scientists increasingly points to indoor, closed-loop biofloc aquaculture as the best alternative. Tilapia has been shown to grow just as well in such setups, and research is testing out other fish species using similar methods.

This all begs the question: In the future, if our shrimp and fish comes from deserts, will we still call it seafood?

Did you know anything about penpack?

Popular
7 Smokable Plants You Can Grow That Aren’t MarijuanaBrian Barth
New Solar Panels Allow Farmers to See the LightNaoki Nitta
6 Differences Between Llamas and AlpacasAndrew Amelinckx
The Cold Swim HomeMarcie Callewaert
This Modern Farmer Wants You to Grow a New Potato StrainBevin Cohen
Explore Modern Farmer
Related
Environment, Labor, Water
California Farms and Farmworkers Attempt to Recover From Record FloodsNaoki Nitta
Food Security, Labor, news
A New Egg Co-operative Has Hatched in the Western U.S.Lindsay Campbell
Food Waste, Plants, Technology
New Solar Panels Allow Farmers to See the LightNaoki Nitta
Lifestyle, MTMF
Meet the Farmer Helping Black Kentuckians Return to Their Agricultural RootsKelly Magyarics
wpDiscuz
We use cookies on our website to give you the most relevant experience by remembering your preferences and repeat visits. By clicking “Accept”, you consent to the use of ALL the cookies.
Cookie settings ACCEPT
Privacy & Cookies Policy