A Brief History of Peking Duck

There aren't many dishes that can claim a royal lineage going back more than 700 years. Peking duck can. According to the official website of Beijing, the dish, known variously as Peking duck, Beijing duck or simply Chinese roast duck, among other names, had its beginnings in the Yuan Dynasty (1271 to 1368), a time when the Mongol Emperors ruled China. 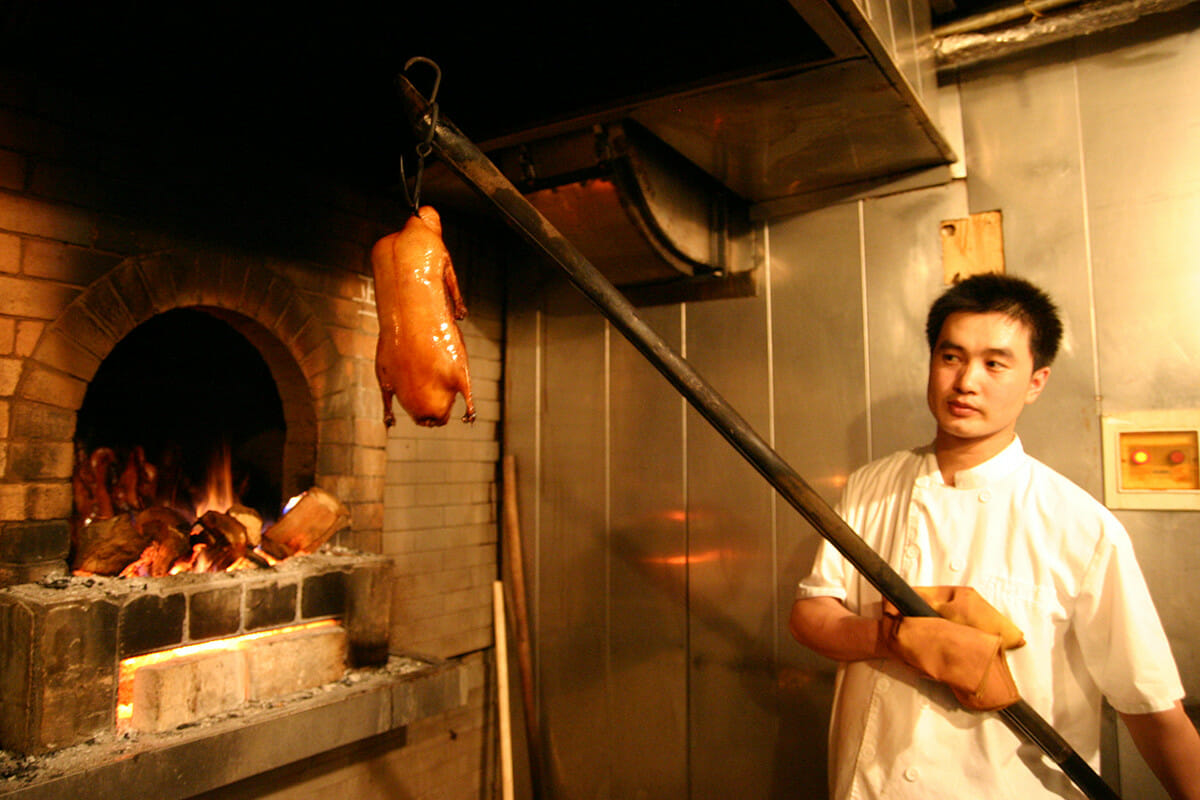 Considered one of China’s national dishes, Peking duck has inspired poetry, been a staple for the ruling class for generations, and has its own museum in Beijing. Heck, there’s even a KFC breakfast version of the dish available in China.

Today, the recipe calls for whole duck, with the head still attached. Air is pumped under the skin, the bird is slathered in a sugary syrup and various spices, left to dry overnight, then roasted in one of two ways (we’ll get to that shortly). It’s usually served with thinly sliced spring onions, cucumbers and sweet bean or hoisin sauce, all wrapped up in small crepes and eaten like a soft taco.

A version of the dish appears in Yinshan Zhengyao (The Proper and Essential Things for the Emperor’s Food and Drink) written in 1330 by Hu Sihui, who was a dietary physician for the royal court. His version calls for roasting the duck inside of a sheep’s stomach. The book, which is as much about health, diet and traditional medicine as it is about food, contains recipes for such exotic fare as tiger bone liquor, donkey’s head gruel and snow leopard soup.

The author warns that duck meat should never be eaten with turtle meat. He also counsels to never eat beef stomach with dog meat. You’ve been warned.

Hu Sihui’s recipe appears to be the best documented version, but according to one source, the Chinese were eating roast duck several centuries before Hu Sihui put ink to paper. A dish called Shaoyazi (literally “burning duck”), goes back to the 400s during the Southern and Northern Dynasties (429-589). These original recipes used a small, black-feathered duck from the Nanjing region, but today, the go-to bird of choice is either the Beijing or Pekin breeds (the Pekin was introduced to the U.S. from China in 1873). In the traditional method of raising the birds, they are allowed to range freely for the first seven weeks and are then confined and force-fed until they are slaughtered at about 65 days.

By the Ming Dynasty (1368-1644), Peking duck was a well established dish and wasn’t just reserved for royalty. In 1416, a restaurant in Beijing, Bian Yi Fang, began serving Peking duck and continues to do so today. We expect that they would be the place to go to get this dish since they’ve had a few hundred years to get it right.

The traditional method for preparing the dish, called Menlu, involved using a closed oven, but in the 1860s a new method, Gualu, in which the birds are hung inside an open oven, became popular. The debate on which method is the best continues today.

For most westerners, a meal at their local Chinese restaurant is often made up of dishes whose provenance dates back a few decades and is more American than Asian, but Peking duck is the exception. It’s a dish with history in every bite.