“People are attracted more by music and video, so ‘Don’t Waste’ can be an accessible way of receiving important information without getting bored,” the students from the Lammas School in London, who were involved in the project, tell Modern Farmer via email. The students, aged 11 to 16, believe the video will have a positive […] 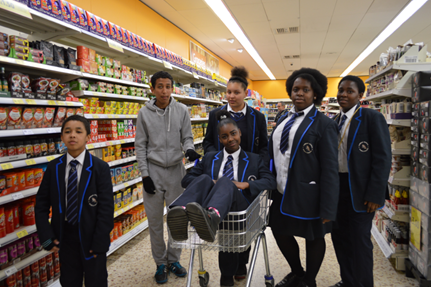 “People are attracted more by music and video, so ‘Don’t Waste’ can be an accessible way of receiving important information without getting bored,” the students from the Lammas School in London, who were involved in the project, tell Modern Farmer via email.

The students, aged 11 to 16, believe the video will have a positive impact on the food waste problem since it both “highlights the issues of food waste” and also “presents the distressing problem in a positive manner.”

Food waste is a major problem. Globally, between 30 and 50 percent of the “food produced today is lost, wasted or discarded somewhere along our food production systems and supply chains before it has chance to reach the dinner table,” says Mickey Reedy, a representative of the food waste advocacy organization This is Rubbish. In the United Kingdom alone, 15 million metric tons of food is wasted annually, costing an estimated £22 billion a year, according to TiR.

“These problems are interrelated, and a lack of understanding about food production and systems leads to decreased appreciation of its value, beyond ‘cash’ value in the shopping basket,” Reedy says. She believes this shows a need for education about the food system and its deeper importance to society.

The project began when the poet Catherine Brogan, a spoken word educator at the Lammas School, met the environmental artist Gemma Seddon, who works with TiR. Poppy Flint, who has since become the head of education for TiR, researched the need for the project and found the funding to get the project rolling. The collaboration resulted in a program at the school called “Edible Education,” that included an event this past November at which the students performed their song, as well as the making of a music video that came out in March.

“We wanted to make a music video about the issue as we found it was a great way to communicate a message to teenagers,” says Brogan in an email.

The students came up with the rhymes and music themselves with the help of Brogan and the workshops provided by TiR. The four students who rapped in the song took various points of view on the issue of food waste, including the perspective of a farmer whose produce was rejected by a supermarket, and the need for governments to address the issue of food waste.

“I just freestyled it and that became my part,” says Dontae Gayle whose rhymes focused on the political side of the issue.

According to the students, the most fun parts of the project were performing live and shooting the video (specifically pushing a fellow student in a shopping cart and using carrots as microphones during the making of the video). But like any production, there were a few challenges. The students say there were some creative differences between the pianist and the rappers. “Learning the song, practicing, changing the song, recording” and “performing in the supermarket when people were shopping” were also taxing aspects of the project.

For Brogan, the challenges came with trying to get students from different school years to work together and coordinating regular meetings with a host of different people.

The event in November took third prize in the United Nations’ Think.Eat.Save Student Challenge. Brogan says the video is going to be shown at the British Film Institute this coming week and that several of the students will be performing at a poetry conference at Goldsmiths, University of London.

The students say they hope to continue to spread the message on the issue of food waste because it’s important to all of us.

“Many people have no food whatsoever, so it is important that we try not to waste any food. We should conserve what we have and help others with wasted food,” say the students.