Let’s Stop Being So Mean to Donkeys at Parties

Donkeys are constantly beaten for fun - not in real life, but in games. 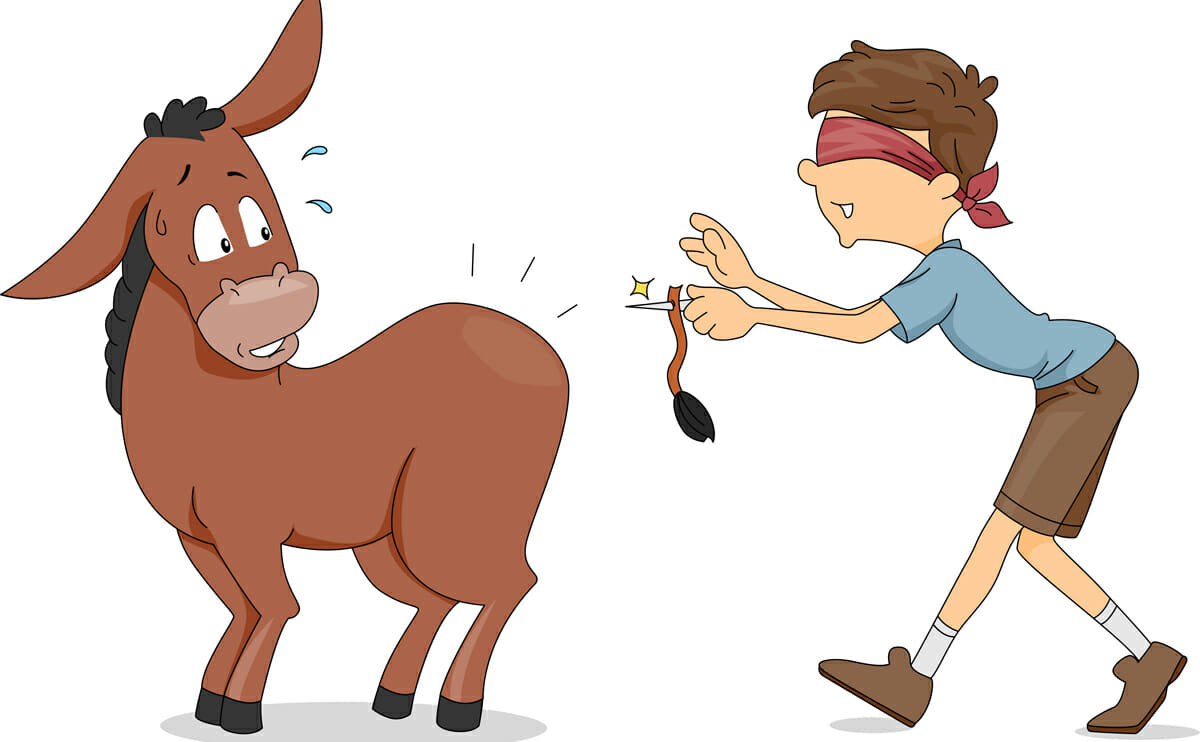 Most kids spent at least one birthday party playing Pin the Tail on the Donkey, the popular game where a blindfolded child is handed a donkey tail with a pin at the end and instructed to try and place it on just the right spot on a picture of a tail-less donkey taped on the wall. (Variations are more or less endless. We remember playing pin the tail on Eeyore, pin the baseball in the mitt and pin the nose on the clown, and so on ad infinitum.) Hijinks ensue when participants actually pin the tail on the shoulder, or the front hoof, or the sky, or wander off altogether.

Pin the Tail on the Donkey was basically the Cards Against Humanity of its time: a party game that went viral. Versions of the game, also called “Donkey Party,” started being copyrighted and printed as early as around 1875. The Early Sports and Pop Culture Blog has dug up what may be some of the earliest print references to the game, which credits its origins to Milwaukee.

In 1887, the newspaper The Washington Critic called Pin the Tail on the Donkey parties “the latest thing in the way of a social gathering in Milwaukee,” in a story about how the game was spreading throughout the country. It infiltrated New York that same year, and Jefferson, Missouri, where a newspaper report called the game “latest social wrinkle that is convulsing capitol society.” To be clear, these were adults and they seemed to be having a hell of a lot of fun. (Why the donkey was chosen for this particular game is more unclear; there could be political origins with the donkey’s association with the Democratic Party, but that tie hasn’t been established.)

Parents in the UK have voiced their concern over the safety of the pins that children use to affix the tail.

The game has come under fire in recent years, though it’s not in defense of the abuse of donkeys. Parents in the UK have voiced their concern over the safety of the pins that children use to affix the tail (helicopter parents, it seemed, aren’t limited to this side of the pond). But the Daily Mail reports pinprick fears could be minimized because the piñata — another game where donkeys are beaten for fun — has overtaken Pin the Tail on the Donkey in the party game pantheon.

In case you don’t remember how piñatas work, participants are blindfolded, handed a blunt instrument (usually a baseball bat or stick), spun in a few circles until they become disoriented, and then told to try and hit the piñata with a stick until it breaks open and treats fall out.

Though piñatas come in all sorts of shapes and sizes ranging from a star to Dora the Explorer, the donkey is one of the most common shapes. This is thanks to the piñata’s association with the day of Our Lady of Guadalupe, December 12, which celebrates the appearance of the Virgin Mary to a peasant outside of Mexico City with prayer, festivities and plenty of piñatas. The donkey is one of the most popular shapes because it represents the beast that the Virgin Mary rode on. So the next time you’re at a party where there’s a piñata, remember: Beating a donkey-shaped effigy at a party is actually a way of venerating the animal.

You are preaching to the choir here, my friend. I never bring animals to the birthday parties that I organize, because animals don’t deserve to be hurt. Those people who hurt animals are bad.