A Lesson in Graveyard Soil Science

Spookier than the thought of walking atop dead people is the idea that modern-day cemeteries have morphed into de facto landfills. 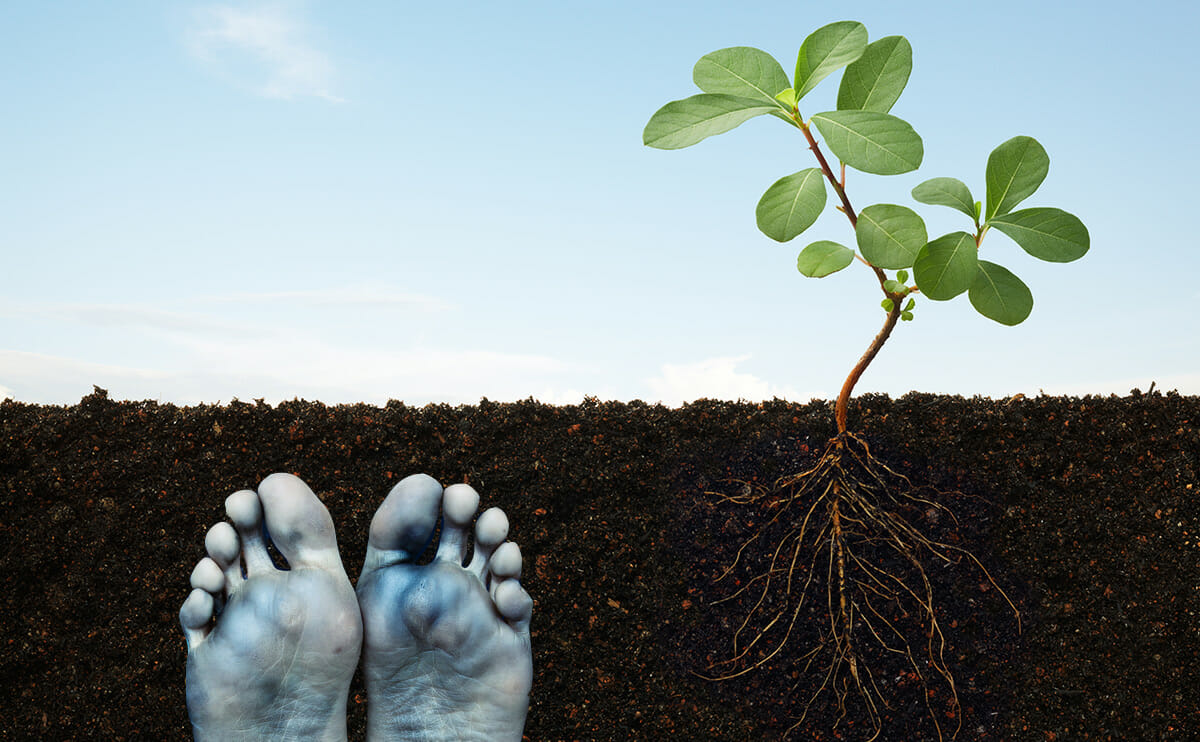 This, perhaps, is why so many eco-conscious folks today are buying out plots at green cemeteries: they’re asking to be buried in a chemical-free manner and without the added carbon footprint that comes with metal caskets and burial vaults (originally invented to deter grave-robbing). Essentially, they’re asking for maggots and the like to chomp away at their bodies just a little bit quicker ”“ to accelerate the process of being broken down and becoming one with the soil.

Green burial, the all-natural and chemical-free way of laying someone to rest, isn’t a new thing. In fact, it’s simply a return to our pre-modern, pre-industrialized ways of caring for the dead. It wasn’t until the mid- to late-1800’s, when chemical companies discovered a method for disinterring the bodies of union army officers, that postmortem embalming first caught on in America.

Green burial, the all-natural and chemical-free way of laying someone to rest, isn’t a new thing.

Before a typical burial, you’ll likely be embalmed, or treated with a solution of toxic chemicals (like formaldehyde or gultaraldehyde) to preserve your corpse for viewing. And while modern-day embalming chemicals are certainly favorable to the mercury and arsenic used in the past, some experts believe that they may still be harmful: Formaldehyde, for one, is a known carcinogen (harmful to funeral directors and others dealing closely with the preserved corpses). Its direct effect on the environment, however, is less clear, says Mark Harris, the author of Grave Matters.

Perhaps spookier than the thought of walking atop dead people is the idea that modern-day cemeteries have morphed into de facto landfills of other largely non-biodegradable and often hazardous materials. Harris estimates that each year, a given 10-acre cemetery contains enough wood (from the production of wooden caskets) to rebuild over 40 homes and enough formalin (a formaldehyde-water solution) to fill a small backyard swimming pool. Each year, the total quantity of metal buried in the United States (from the production of metal caskets) is enough to rebuild the Golden Gate Bridge.

For these reasons, Harris calls the impact of your typical modern-day sendoff “pretty substantial.” 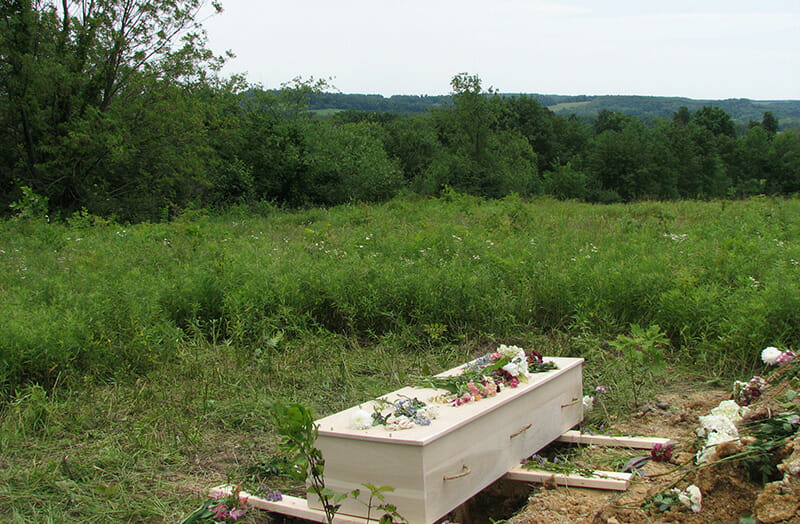 A grave at Foxfield Nature Preserve, a green cemetery on 43 acres of a former farm in Wilmot, Ohio. / Courtesy Foxfield Preserve.

According to Green Burial Council founder Joe Sehee, this invasive treatment of the dead is almost exclusively practiced in the Western world. “There’s only half a dozen countries in the world that embalm bodies to any significant degree,” he says. “There’s only two countries that use burial vaults, and most of the world doesn’t even use caskets.” University of Oregon Soil Science Professor Cynthia Beal agrees. “The practices in the United States over the last several decades have really inhibited the decomposition process,” she says.

Unless you’re a zombie, the only job of a dead body is to dispose of itself through decomposition. And decomposition is quite an important process. The farmer knows this well: Bury a dead ewe in a pile of compost and she’ll eventually make the soil all the richer. The same goes for humans: when left untouched to decay, without chemical preservatives and the like, experts argue that we’re ultimately better off.

Unless you’re a zombie, the only job of a dead body is to dispose of itself through decomposition.

Herein lies the major difference between conventional and green burial: When we peel away the layers of chemicals and caskets and concrete grave liners that accessorize death in the modern world, we’re closer to the soil and we experience a quicker and more natural decomposition.

Yet more significant than the debate over conventional versus green burial, to Harris, is the issue of proper cemetery planning. Cemeteries, he says, should be placed in areas that are not subject to flooding. Otherwise, trace elements of harmful bacteria and pathogens emitted from the corpses might end up in nearby streams. So, placing cemeteries on high ground is key. They must also be situated in regions abundant in substances such as loam, clay, rock or sand ”“ these materials act as natural filters that trap the bacteria before it enters our water. And then when cemeteries are over-crowded, the ground is unable to absorb all of the bacteria and pathogens.

Sustainable burial practices might soon be the new norm. “Green burial is going mainstream, and not just because it’s good for the environment,” says Harris. “It embraces good old-fashioned American values: thrift, simplicity, love of family and desire to do it yourself.” So while shopping local and driving low-carbon emission vehicles great, you might want to carry your eco-friendly inclinations to your grave.

It’s an interesting theory but my question is if it is safe to use this land as a fertile soil? Because there are these bacteries and pathogens…

I restore old cemeteries. Should I be worried about mercury in the soil? I don’t always use gloves when I handle the dirt…