Crime fighting beekeepers set out to catch rustlers and to educate law enforcement. 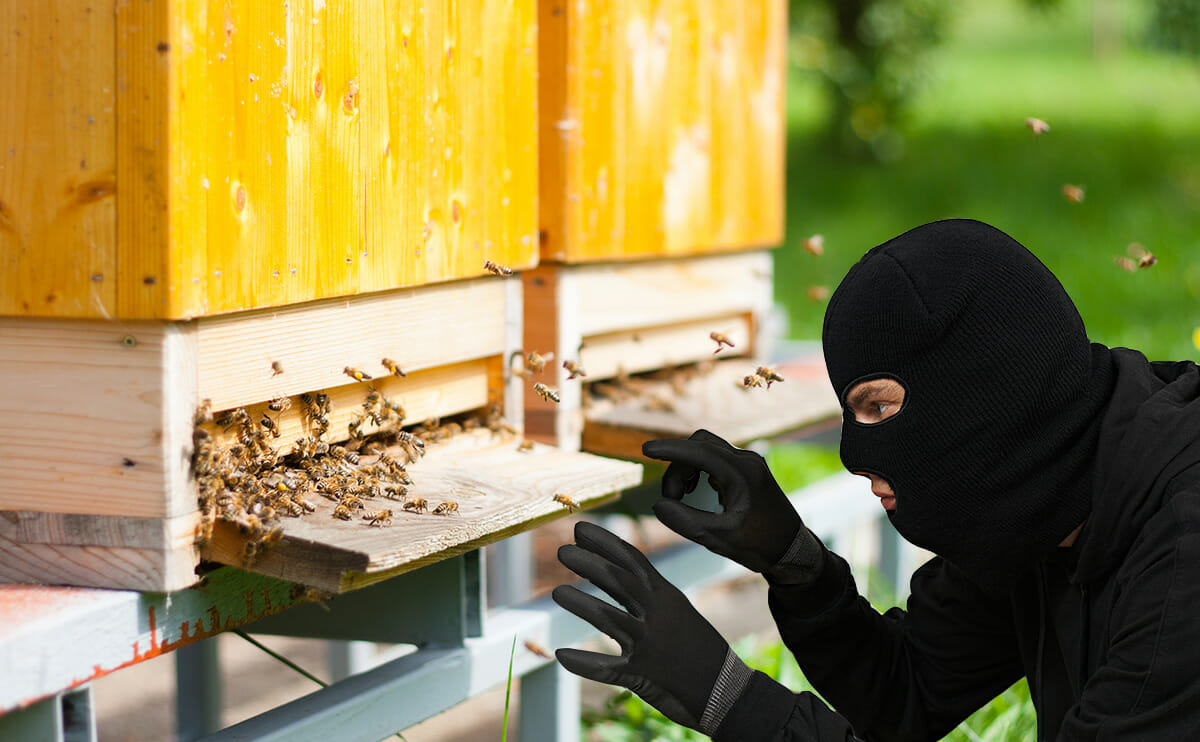 For one thing, unlike impulsive smash-and-grab types lurking on city streets, these rural thieves are generally not operating on a whim. Many are experienced beekeepers themselves. And they’re getting bolder. Since Colony Collapse Disorder began decimating hives by the thousands across the United States in 2006, the incentive to steal bees is greater. As rural law enforcement and the courts struggle to keep up, commercial beekeepers are stepping in to catch the bee rustlers.

Two years ago, commercial beekeeper Mark Tauzer discovered hundreds of hives missing during a routine check of his hives in a farmer’s field he’d been contracted to pollinate. Tauzer immediately organized a search. He and his men drove country roads in Yolo County, a few miles west of Sacramento, looking for clues.

Tauzer and his men found lids from the stolen hives scattered along the road, leading to the broken-down bee yard belonging to the thief.

Viktor Zhdamirov knew the beekeeping rudiments enough know how to remove the queens and honey from Tauzer’s hives. However, en route back to his bee yard, he’d ripped the lids off the hive boxes and blithely tossed them aside when reaching in for the treasure. Doing so, he’d violated a code that prevails among most beekeepers.

“Most people go into beekeeping because they love bees,” Tauzer explained. No matter how fierce competition may get among beekeepers, it’s understood, he said, “You don’t hurt the bees.”

Tauzer called Yolo County Sheriff’s deputies who arrested Zhdamirov. After booking, he soon made bail. Bee thievery is not generally taken quite as seriously as, say, grand theft auto.

In fact more than two years went by before Zhdamirov was put on trial, for what was eventually valued as a $65,000 bee robbery.

Bee thievery is not generally taken quite as seriously as, say, grand theft auto.

As it turned out, Yolo County did convict Zhdamirov and he received a three-year sentence in the county jail and restitution payments of $65,000.

“We don’t like to see justice done in such a drawn-out way,” says Yolo County Chief Deputy District Attorney Jonathan Raven. Basically, Raven said, since Zhdamirov had made bail on a bee thievery case, the pressure was off on getting him to trial. There was difficulty in finding a Russian translator, the victim was attending a wedding during one scheduled trial date… and so on.

Joe Romance, a commercial beekeeper based out of the vast almond growing acreage surrounding Bakersfield, also organized his own effort to recover 180 stolen bee boxes in January this year. Not too long after his hives went missing, a stranger showed up in town with an odd proposition.

It was apparent to the local beekeeping community that something fishy was up when a “new person who said they were local,” Romance says, “approached a bee broker saying they were looking to rent out bees. Except nobody knew who this guy was.”

So Romance and his beekeeping friends set up a sting.

One of Romance’s beekeeper friends posed as an almond grower looking to rent bees and called the new beekeeper. He offered very top dollar to rent the “local’s” hives, $250 apiece, just so he’d be allowed to view the hives. As soon as Romance’s undercover beekeeper friend saw men inside the “local’s” razor wire-enclosed bee yard, grinding beekeeper brands off of hive boxes, he called Romance. Since the bee rustlers were currently engaged in illicit activity, Romance called the Bakersfield sheriff.

Sheriff’s deputies were delayed by several “shots fired” calls. When deputies arrived after a few hours, Romance and the undercover beekeeper entered the illegal bee yard with them. Romance recognized some of his own hives. He informed deputies. They interrogated two men working in the illegal bee yard and arrested one of them. They had to let the other go.

“He convinced them he really didn’t know what was going on with the bees or their hives or where they had come from,” says Romance. The man arrested quickly made bail and disappeared. At least Romance says, he was able to recover his hives.

“Beekeeping is a cyclical operation,” he says, “they come through Kern County when almonds and other crops need pollination, and then they move on, sometimes thousands of miles away.”

So, it’s hard for cash-strapped rural county law enforcement to contact witnesses for interviews and pay for their accommodations should a case actually come to trial, Brunsell says.

Brunsell and his unit have reached out to beekeepers to help with crime prevention. “We need their expertise to help us find out when a crime involving bees has actually been committed or not.”

Romance agrees that rural law enforcement needs to get educated on beekeeping.

“We realize that for the sheriff, the problem of bee thefts is miniscule,” he says. “I mean when you compare the losses to say, car theft. We’re a low priority for them.”

if law enforcement spots hives with a particular brand, beekeepers could help spread the word and quickly determine if they were stolen.

Romance hopes that will change as rural law enforcement officers became more aware of bees and that partnerships with beekeepers are crucial. For example, when making a traffic stop, Romance says, if a law enforcement officer notices hive boxes stacked on a pickup truck’s bed, they could make a note of any brands and call them in. Could a permanent central database of beekeeper brands help prevent rustling? Romance doesn’t think so; beekeepers are a nomadic lot and many change their brands periodically. But if law enforcement spots hives with a particular brand, beekeepers could help spread the word and quickly determine if they were stolen.

“Despite being familiar with farming/ranching issues, “she says, “I did not know anything about commercial beekeeping. The victims in this case were wonderful and more than willing to educate me so that we could educate the jury.”

One unique logistics problem arises when dealing with the “stolen property” or evidence in a bee theft case. Namely, you can’t impound a bee hive like a car. For one thing, if you don’t know how to handle the stinging insects, you might not want to get that close. The evidence must be, Holzapfel says, “returned to the victims immediately. Law enforcement has no way of maintaining bees as evidence and they would have perished if not properly cared for.”

With increasing awareness on the part of law enforcement of the importance of bees to California’s economy and the willingness of beekeepers like Romance to educate them, perhaps bee rustlers will find their crimes less profitable in the future.

“Farmers and ranchers are a very important part of our community and I do not take crimes against them lightly,” says Holzapfel.