Vending machines are becoming more than just a way to sell coffee, cigarettes, cola and candy. 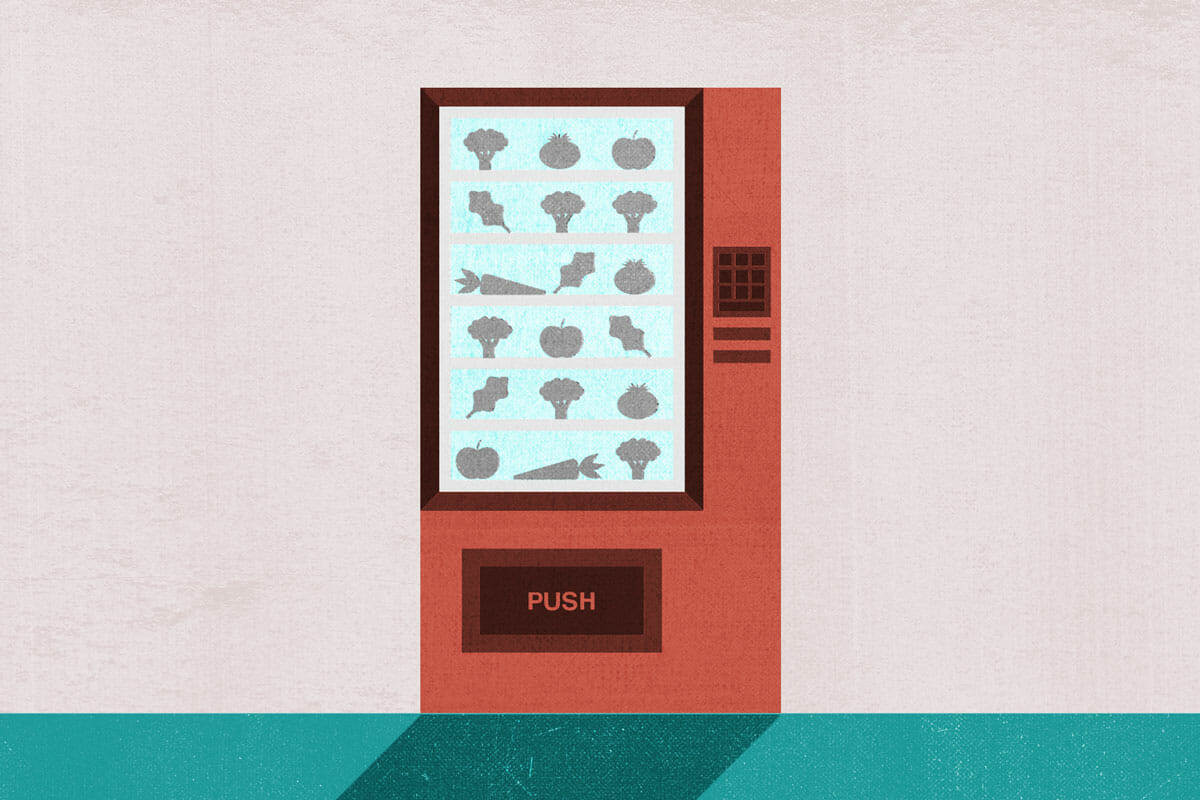 In 2013, New York Governor Andrew Cuomo set aside $2 million for a marketing campaign known as Taste NY, as well as a $60 million tourism initiative called “I Love NY.” As part of the initiative, visitors can now partake in programs such as local wine trails, where they can sample New York made wines. But perhaps more surprisingly, they’ve gussied up those much-maligned roadside features: rest stops. In addition to stores featuring local products and farmers markets, the state is now tackling vending machines, long-recognized sources of less-than-local fare.

Vending machines, invented near the beginning of the first century, have a surprisingly long past. According to Kerry Seagrave’s “Vending Machines: A Social History of the Devices,” the first one was coin-operated and designed to sell holy water. In 1888, food vending machines got their start with the advent of gum dispensers selling tutti-fruitti gum at train stations in New York City. By 1950, vendors had the ability to sell refrigerated sandwiches. Yet outside of the brief automat craze, few bothered to sell perishable goods. Until recently, the machines were mostly used to sell the 4Cs: coffee, cigarettes, cola and candy.

Then farmers and foodie companies realized the appeal of using vending machines to sell raw milk, eggs, or fresh meals on the go. Glaum Egg Ranch in Santa Cruz County, California was one of the earliest adopters, dispensing eggs with a side of entertainment. When customers purchase eggs, they’re also treated to an animatronic show complete with singing and dancing chickens. A more traditional vending machine called Farmer’s Fridge was unveiled in 2013. The company sells restaurant-quality, locally sourced meals in BPA-free containers. Farm-fresh vending machines in the United States often sport buzzwords or gimmicks to get customers (and the media) excited. In Europe and Japan, they’re a less flashy affair and many farmers use vending machines as an efficient alternative to roadside stands. The Brunimat milk vending machine was the first of its kind in Europe in 1994, long before eating local became a nation-wide trend in the United States.

New York decided to implement a vending machine program that was somewhere between practical and publicity stunt. Machines at rest stops are now selling items ranging from Red Jacket Orchard juices from Geneva, New York to Finger Lakes Fresh apple slices from Groton and Sweet Sam’s cookies from the Bronx. Health-wise, these vending machines are a far cry from dairy and eggs, but they’re getting people comfortable with the idea that local food is for everyone.

New York has installed 10 machines throughout the state and hopes to install more if they prove popular. This marks the first time local-fare vending machines have been sponsored by the public sector. Vending machines have a number of advantages over brick-and-mortar stores or even farmers markets. There’s no need to pay an employee to run the register and, unlike a weekly market, the machines can run 24/7 in many locations at once. As far as trends go, farm-fresh vending machines are surprisingly practical. They bring local foods to customers who aren’t likely to sign up for a CSA or visit their local farmers market.

Health-wise, these vending machines are a far cry from dairy and eggs, but they’re getting people comfortable with the idea that local food is for everyone.

“Tourism and agriculture in New York is a huge industry,” said Joe Morrissey, Spokesman for the NYS Department of Agriculture and Markets. And that means that the state wants to get the most people possible on board with the local trend.

Especially in the last decade, eating local has developed the stigma that it’s only for a certain class of people. The state’s ability to promote local food in the most everyman of government buildings – a rest stop – is a huge step toward making such foods feel more accessible. The vending machines also boost farm income and offer a bit of brand recognition. Visitors who see a farm’s name in a vending machine, for instance, might be moved to take part in a farm tour or seek out their products elsewhere.

Finding unique ways to bring local foodstuffs to people who otherwise might not consume it is an idea that is taking hold across the country. In Vermont, another state with a strong interest in promoting local food, the state government has started placing local foods in veterans’ homes, hospitals, schools and state offices.

By repurposing the decades-old technology of vending machines to support local food, New York is doing the same. Often, buying local means eating out at an expensive restaurant or cooking a meal from scratch with farmers market groceries. As Morrissey points out, “Vending machines are great for people on the go.”