Debunking Hey Diddle Diddle: Can a Cow Jump Over the Moon?

Tackling an age-old question involving our bovine friends and a nursery rhyme we all know and love. 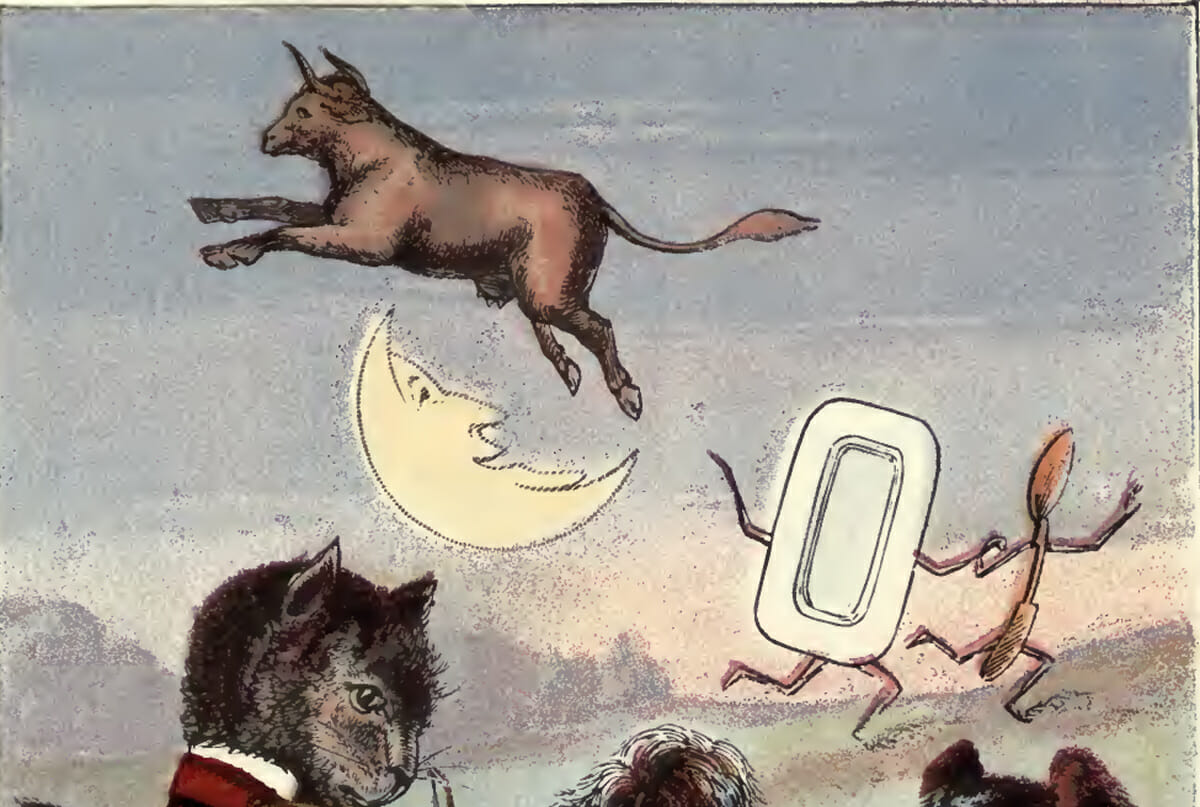 Oddly enough, yes, they can. Animal behavior researcher Jeffery Rushen told NPR that “cows are suckers for novelty” and that the smallest change in scenery or lifestyle can get them really excited. Sometimes, he adds, this excitement is expressed with jovial prancing and hopping around, even if stimuli change is in fact the advent of the final march to the slaughterhouse.

Even stranger than hopping around at the prospect of imminent death, is an obscure event that is hosted annually in Finland that showcases the airtime abilities of the country’s cattle jumping elite. The fair, which attracts farmers, and their prized leaping cattle, from all over the Nordic nation, features what they call a “bovine agility” (bovuestrian) contest. While the obstacles are far from lunar height, the feat of a 1500-pound grazer leaping over a bar for sport is undeniably impressive.

While the obstacles are far from lunar height, the feat of a 1500-pound grazer leaping over a bar for sport is undeniably impressive.

Alas, we are still pretty far from the moon, but one cow in rural England seems to at least be trying. In 2009 a Blagdon resident was alarmed to find damage on his roof. He called the local police as he figured it to be a failed attempt at burglary. The case went unsolved until a neighbor accidently stumbled across the culprit days later when he looked out his window and saw a cow from a nearby field perched on the damaged roof. Although there were no eyewitnesses, local police, as well as the homeowner and neighbor, believe the cow must have jumped up from the ground below, a height difference of nearly six feet.

Do cows have any space flight experience?

Unsurprisingly, no, well, unless plush counts. In 2013, Eva, a toy cow from New Zealand, spent an afternoon on the edge of space in celebration of World Earth Day. Eva aside, no other cow has ventured to the heavens, unlike a long list of other animals who have made the journey.

Since the beginning of the space race, NASA, ROSCOSMOS and other national space agencies have sent a variety of animals to space, but not cows. Monkeys, chimps, mice, dogs, lizards, quail, fruit flies, rats, newts, spiders and even tortoises have all left the bounds of our humble planet for the purposes of science. Unfortunately, most of these early astronauts made the trip with a one-way ticket, sent up to the heavens, never to return. From a cow’s perspective, being left out of the space race may be a good thing.

What would it take to send a cow to the moon?

We posed this question to NASA. They said they were too busy to answer. Big surprise. However, although the question seems like a stretch, as we know, animals have been sent to the moon.

On September 14th, 1968, the U.S.S.R launched Zond 5, a prototype of their first manned moon ship. On board was a “biological payload” that included turtles, worms, flies, seeds and other organic material. The probe flew around the moon four days later; marking the first time any living thing had made the long and dangerous journey. Unfortunately for those on board, problems with the probe’s re-entry guidance system subjected the “payload” to a fatal g-force upon re-entry.

The Zond tests prove that we’ve had the ability to allow cows to jump over the moon for nearly 50 years.

Zond 6, launched two months later, and carrying a similar payload, made the same trip around the moon. Again, re-entry problems destroyed the specimens.

Although the outcomes were not pretty, the Zond tests show that perhaps we have had the ability to allow cows to jump over the moon (or at least circle it) for nearly 50 years.

Looks like we didn’t need NASA’s answer after all.

A cow will never physically jump over the moon, and no national space agency has any plans to send a one into the void. For now, Eva remains the closest any cow has, or likely ever will, come to space travel.

Above: Illustration from “Uncle Dick’s Series Nursery Rhymes” via archive.org

Hey diddle diddle rhyme is about bovine mating. The moon was understood to be a cow testis in the sky. White round balls of chalk representing a mature bull testis are found in British long barrows from 5000-6000 years ago.