UFOs, sinister cults and secret government operations have all been blamed. Scientists have put forth more mundane explanations, such as run of the mill scavengers. Ranchers still report these incidents, and cattle mutilation has been enshrined in popular culture on shows like the “The X-Files.” Modern Farmer talked to Bill Ellis, associate professor of English […] 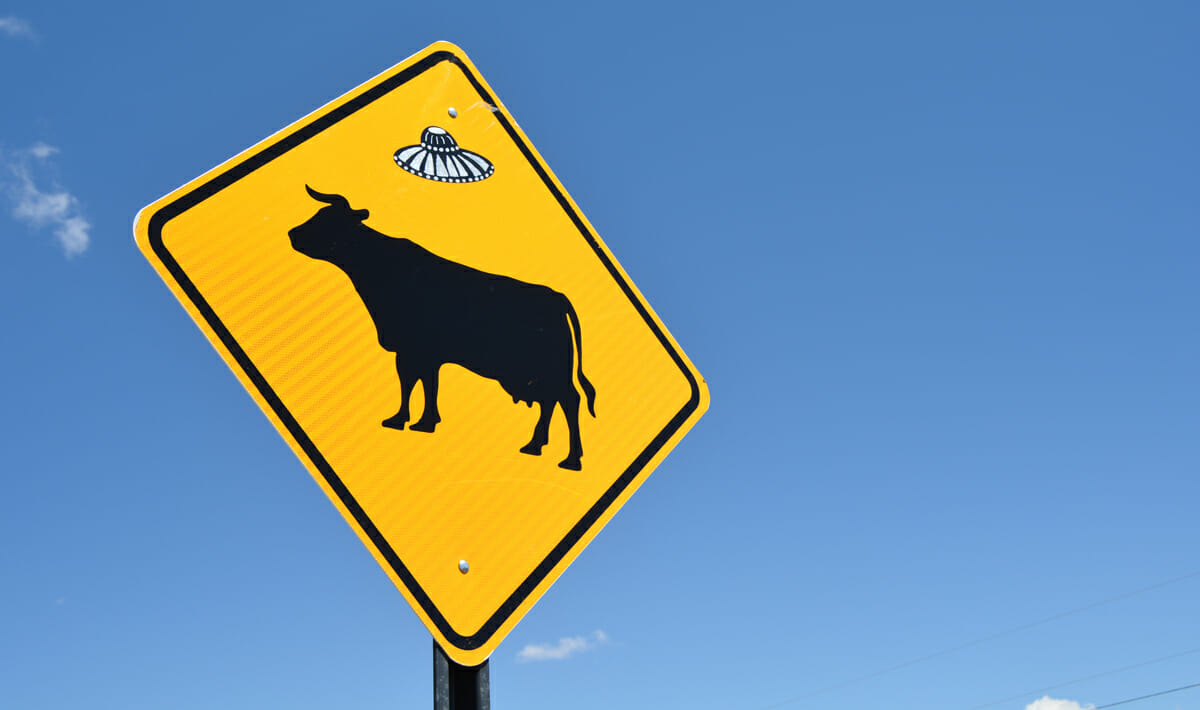 UFOs, sinister cults and secret government operations have all been blamed. Scientists have put forth more mundane explanations, such as run of the mill scavengers. Ranchers still report these incidents, and cattle mutilation has been enshrined in popular culture on shows like the “The X-Files.”

Modern Farmer talked to Bill Ellis, associate professor of English and American Studies at Penn State Hazelton, who wrote about the phenomena of cattle mutilation in his book, “Raising the Devil: Satanism, New Religions, and the Media.”

Modern Farmer: How old are these stories? How far back to they go?

BE: The earliest cycle of stories that I’ve seen date back to the beginning of the 20th century in England. There were cycles of panics that were caused by people allegedly killing and mutilating horses and domestic animals of various kinds. And there were a number of explanations that then created an additional flap on top of that, and that’s mostly what I’m interested in – when you have all of these theories that explain the mutilations and then those theories take on a life of their own.

There were two ideas: One was that there was a wolf that had been somebody’s pet that had escaped and was committing all of these mutilations. Wolves by that time were extinct in England, so there’s no way that an actual wolf could have appeared and done all of these things. And the other thing was that it was a lunatic ”“ that there was somebody going around and doing this out of some kind of psychological compulsions. And in fact there was a person who was arrested and was tried and convicted of committing a number of these mutilations. And here’s an interesting twist: Arthur Conan Doyle, who was the creator of Sherlock Holmes, actually investigated the evidence and found a number of faults and determined that the person had been set up as the culprit because people had an ethnic prejudice against him – he was an East Indian, a scapegoat to blame for these incidents.

It’s something that then crops up in the popular press in a small way off and on in England and particularly in the United States until the ’60s, and it then becomes much bigger news, blamed initially on hippie cults. This was the time where there was a lot of attention being given to the counterculture and the interest of some people in non-traditional religions: cosmic consciousness and meditation. And it was a time that the actual Church of Satan in San Francisco was founded. That had generated a lot of press and a lot of concerns. The theory then became developed that what was happening was some of these young people had been recruited into some sort of cult that involved animal sacrifice.

MF: Why did people feel compelled to create these fantastic reasons behind the cow mutilation?

BE: I would say the short answer is that these are mythologies. These are large complex beliefs and stories and ideas that come together into a theory that explains not just mutilations, but explains lots of things about life. One of the reasons these mythologies are so popular is that it’s sort of an evil other side of intelligent design; there’s something beautiful or clever or fascinating about life on earth, and that’s evidence that a supernatural creator designed that animal or that feature of nature that way. If something bad happens, you lose a valuable animal out in your field and when you get to it, it seems to have been drained of blood and it’s got an ear and other body parts missing and nobody can explain any good reason why — some evil “other” must have done that. And if bad things happen it’s because some evil force or some group of evil people are doing that. And that for lots of people, believe it or not, is a much more satisfying explanation for the world that we live in.

MF: Have cattle mutilation stories changed at all over time?

BE: The actual natural event tends to be pretty similar. Where things differ are with the interpretation of the details.

At one point there was supposed to be kind of a occult significance as to whether the left ear or the right ear was missing. People would look over what they thought were surgically precise cuts that were made on the side of the animal to see if they represented some kind of an occult symbol. And then you’ve got the quasi-scientific explanation, which is that these body parts are being biopsied, and they’re being moved by extraterrestrials. I think the UFO explanation now seems to have gotten somewhat old. Now maybe if I were out in the Great Plains, I would find a lot of people out there who were still talking about the “black helicopters.” The black helicopters were what the aliens used to commit the mutilations and biopsy the animals. And that generated a tremendous amount of rumors and beliefs, all because it was obvious that [the helicopters] were not made by humans because they were silent. A silent helicopter was obviously an alien spacecraft. I think that all of these will be seen against the ground of real suspicion of the federal government, because they all come with the proposition that the government knows a great deal more about what’s going on than they’re letting on, and the reason they’re not telling you why these mutilations are taking place is because they don’t want you to know.

This interview has been edited and condensed

This article did not at all answer the question posed by its headline. What would an English professor know about different kinds of cuts in flesh? There are actual scientists who have disagreed with the idea of alien and black helicopters on a rational level rather than dismissing them off-hand as kooks and conspiracy theories. This article is an insult.

Popular
Alaskan Salmon Face a Stream of New MinesBecki Robins
7 Smokable Plants You Can Grow That Aren’t MarijuanaBrian Barth
Why Don’t We Eat Turkey Eggs?Dan Nosowitz
Where Has All the Mustard Gone?Chloe Faure
Goat Sex: Everything You Wanted to Know But Were Afraid to AskAndrew Amelinckx
Explore Modern Farmer
Related
news
The Fertilizer Shortage Will Persist in 2023Shea Swenson
Animals, Environment, Technology
Alaskan Salmon Face a Stream of New MinesBecki Robins
Animals, MTMF
Meet the Maine Teenager-Turned-Landscaper Thanks to Grazing GoatsBridget Shirvell
Animals, Environment, Health
To Stop New Viruses Infecting Humans, We Must Protect Bat HabitatAlison Peel, Peggy Eby, Raina Plowright
wpDiscuz
We use cookies on our website to give you the most relevant experience by remembering your preferences and repeat visits. By clicking “Accept”, you consent to the use of ALL the cookies.
Cookie settings ACCEPT
Privacy & Cookies Policy