Not in My Backyard Farm: Slaughter Stirs Up Controversy

Nationwide, opinions are divided on whether killing farm animals in urban areas is kosher. 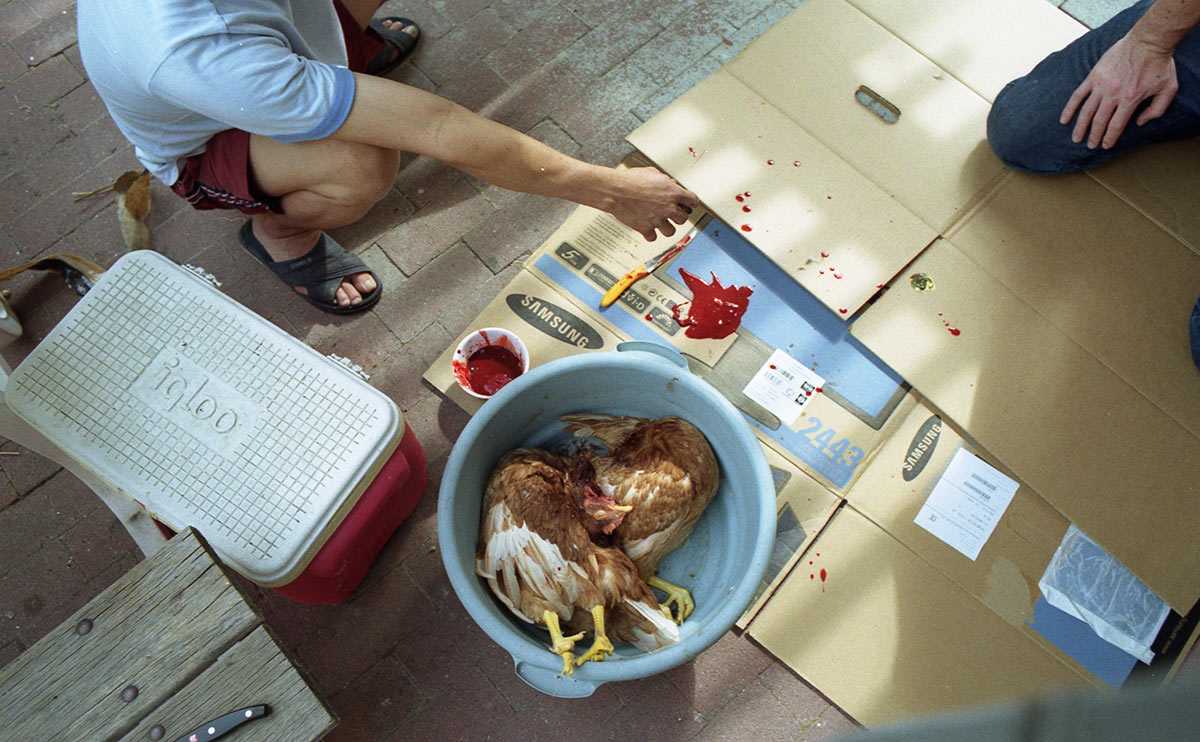 This spring, in Berkeley, a coup almost broke out in a city chicken coop. It turns out that when urban farming involves slaughtering – not just raising – animals, things get complicated.

The battle over the birds began in late April when Urban Adamah, a three-year-old city farm with religious roots and a pop-up vibe, planned a public chicken slaughter workshop known as a shechita, a ritual killing in accordance with Jewish tradition. Thirty people signed up for the sold-out event. But as word about the workshop spread, animal rights activists called foul over the plight of the fowl – they demanded the hens receive safe passage to an animal sanctuary and contemplated a rescue mission. Four days before it was slated to take place on May 4, organizers cancelled the workshop because the farm’s landlord feared a protest could get out of hand.

Chickengate, which first broke in the Jewish press, ended up going viral. And despite the brouhaha over the birds, the farm quietly killed them in private anyway 10 days later. That fact caused further outcry from the poultry protectors. “I am really heartbroken for the chickens,” says Hope Bohanec of United Poultry Concerns, which held a candlelight vigil outside the farm to register dismay over what went down on the farm. “The bloodshed did not have to happen.”

The class that caused the uproar was not the first of its kind. Workshops in which a shochet — a Jewish person trained and certified to slaughter animals in accordance with kosher traditions — performed such services had taken place in the past. In such classes, participants could pluck, clean, salt and rinse the hens as they saw fit; no one was asked to wield the knife.

The chickens were turned into that most traditional of Jewish comfort foods, chicken soup, and handed out gratis as part of a program Urban Adamah runs to serve the underprivileged. Presumably, those who consumed the soup were less conflicted about the chickens’ fate.

Chickens are an integral part of this educational farm’s environmental ecosystem and social justice mission. They make manure that produces compost for the 18,000 pounds of farm fresh greens the farm grows, destined to go to low-income residents and local food banks. They lay eggs in a large, open coop and those eggs are given away to hungry people too. They give staff and students daily practice in animal care, in keeping with the farm’s core values of kindness and compassion to all living things. And they provide a source of meat for financially challenged members of the community.

“Our organization is primarily about teaching people where their food comes from and the consequences of the choices they make on the planet, their bodies, and the animals impacted,” Urban Adamah founder Adam Berman told J Weekly during the height of the chicken controversy. “Many people who eat meat are disconnected from the source of that meat and as a result are desensitized to the steps involved with meat production.”

Sounds reasonable enough, no? We live in a country that consumes the majority of its meat from factory farms which “treat living animals like dying ones” and throws them in their own fecal soup before shipping them to a supermarket near you, as Jonathan Safran Foer and others have reported in graphic detail. But animal rights activists, including United Poultry Concerns, In Defense of Animals and Jewish Vegetarians of North America saw it differently: In their minds, there are no grounds on which it is compassionate or ethical to kill an animal for food. It made for drama straight out of central casting. At one point, a Jewish matchmaker issued mass email blasts denouncing the farm and declaring it should switch to “veganic farming practices” that don’t “promote and glorify ‘humane’ slaughter.”

Backyard Butchers and the Law

The rhetoric quickly got ugly. Online commenters compared killing 15 hens for food to the extermination of 6 million Jews during the Holocaust. But histrionics aside, the dustup raises thorny legal and moral questions about killing animals for personal consumption in city settings nationwide.

Berkeley’s ordinances allow residents to raise rabbits, chickens, ducks, geese, turkey, and other domestic fowl, as long as they are kept in an enclosure that isn’t within 25 feet of a home occupied by humans. Further, coops must be maintained in a sanitary manner. None of the detailed codes on the books address livestock slaughter in Berkeley.

In recent years the Bay Area has been the epicenter of urban farmers intent on slaughtering their own animals. Bestselling author of “Farm City,” Novella Carpenter, ran afoul of local Oakland ordinances for slaughtering her own livestock. Carpenter has killed chickens, geese, turkeys and rabbits on her property. In early 2011 after the city received a citizen complaint she agreed to cease operation until officials decided whether she was eligible for a conditional use permit to raise livestock. That spring she got the permit, after forking over $2,858.13. It includes a stipulation that no on-site animal slaughtering or butchering take place.

Carpenter gets why the practice makes some squeamish.

“Even to me, backyard slaughter sounds awful,” she said to Bloomberg News when this farm flap played out in the press. “I imagine blood everywhere and screaming animals. In reality, it’s nothing like that. We don’t want to open a slaughterhouse in the backyard, we just want to kill a chicken.”

During the height of the Carpenter controversy, a group calling itself Neighbors Opposed to Backyard Slaughter emerged, whose goal is to thwart these practices taking place within city limits. Such efforts cite health and safety, noise nuisance and ethical concerns as their main objections to these edible endeavors.

“To keep costs down, many people keep animals in unsanitary conditions and provide minimal to no veterinary care, which increases suffering, odors, predators and disease — making it an issue not only of animal welfare but also of public nuisance and public health,” said fellow urban gardener Colleen Patrick-Goudreau, in a local radio opinion piece. “Oakland’s underfunded shelter, animal control officers, shelter staff and volunteers are already overburdened with cases of abuse, neglect, abandonment and overpopulation of dogs, cats and pet rabbits.”

Some, meat eaters or not, say simply that if they’d wanted to live in close quarters with farm animals they would have chosen a rural, not urban, existence.

“It’s my right to raise and grow my own food in keeping with my heritage and cultural traditions,” says Esperanza Pallana, a Mexican-American who grew up in a San Francisco home where chickens were routinely slaughtered. She has gone on to raise and slaughter meat on her own property. So has Berkeley-based writer Kiera Butler, who documented her heritage turkey raising and butchering adventures in an online diary.

While the U.S. Department of Agriculture oversees commercial slaughter, cities set their own ordinances on animals killed for personal consumption (i.e. not for sale). Municipal codes on keeping and slaughtering chickens, pigs and goats for personal consumption can vary tremendously within a small geographic region, like the East Bay of San Francisco. Across the country, the legality of killing a backyard chicken differs from that of a pig. And many of these zoning codes are sufficiently vague or rarely enforced. And of those who raise backyard chickens, it seems only a few kill them on site. A 2010 USDA survey of 425 people who keep chickens in Denver, Miami, Los Angeles and New York found that just 8 percent slaughtered hens over the course of a year.

More than 20 U.S. cities have passed recent ordinances regulating the keeping of urban livestock, though local codes are frequently silent on slaughter. Some cities, such as Chicago, ban slaughter outright. Others, such as Cleveland, allow it. In that city’s case, it must take place inside a garage or other building only if for use by the occupants of the premises, according to a May 2014 journal article in Land Use Policy on urban livestock management and regulation in the U.S. Indeed, there’s so much variation around the keeping and killing of farm animals that zoning/land use lawyer and Modern Farmer writer Kristen Ploezt recommends that those intent on DIY livestock slaughter check with their local zoning office or board of health first to get the green light.

Some urban homesteaders want to control their food supply from life to death to dinner. And these city-dwelling carnivores maintain that an urban farm slaughter is more humane than an industrial abattoir on a factory farm.

“Health and safety concerns are important,” agrees Urban Adamah’s farm manager Willow Rosenthal, the co-author, with Carpenter, of “The Essential Urban Farmer.” Rosenthal was slated to co-lead the chicken slaughter workshop. “However, it’s important to understand that with meat, the longer the time lapse between slaughter and plate the greater the health risk. This is a huge concern with our industrial food system but not actually relevant with urban slaughter because we are right where the eaters are.”

Legal rights are one thing; it’s also crucial to learn what to do from a humane and health perspective. Animal husbandry hobbyists could, after all, make a mess of the slaughtering process and cause unnecessary suffering. Instructional YouTube videos offer practical advice on bunny butchering and chicken slaughtering designed with the amateur animal husbandry enthusiast in mind. Blog entries provide recommendations on cutting up that backyard kill and groups like Oakland’s Institute of Urban Homesteading provide expert instruction and guidance on everything from bee keeping and goat farming to rabbit butchering and fowl slaughtering.

Granted, not every city slicker wants to live in squealing distance of an urban farm that raises livestock for consumption. And there have been scattered reports in recent years of growing numbers of abandoned chickens, as hens get dropped off at animal shelters or are left to fend for themselves once their egg-laying days are over. For their part, urban farmers are dismayed that animal rights advocates target them ”“ and think their energy would be better spent protesting the corporate cartel that makes up Big Meat.

About three years from now, Urban Adamah’s current flock of hens will be ready for culling. That event will likely take place in private without any public announcement, says Urban Adamah’s Berman. The farm is set to put down permanent roots later this year in that urban endangered species – a large, undeveloped plot of land. As they do now, the hens will have plenty of room to run. Will the bird watchers be on vigilant patrol?

Says Rosenthal: “There are so many truly horrible animal rights violations in so many places other than the D.I.Y. urban farming community that it seems ludicrous to target us.”