Far too many farms no longer function except as beautiful (and expensive) event spaces that play to false nostalgia for a romantic, rural life. 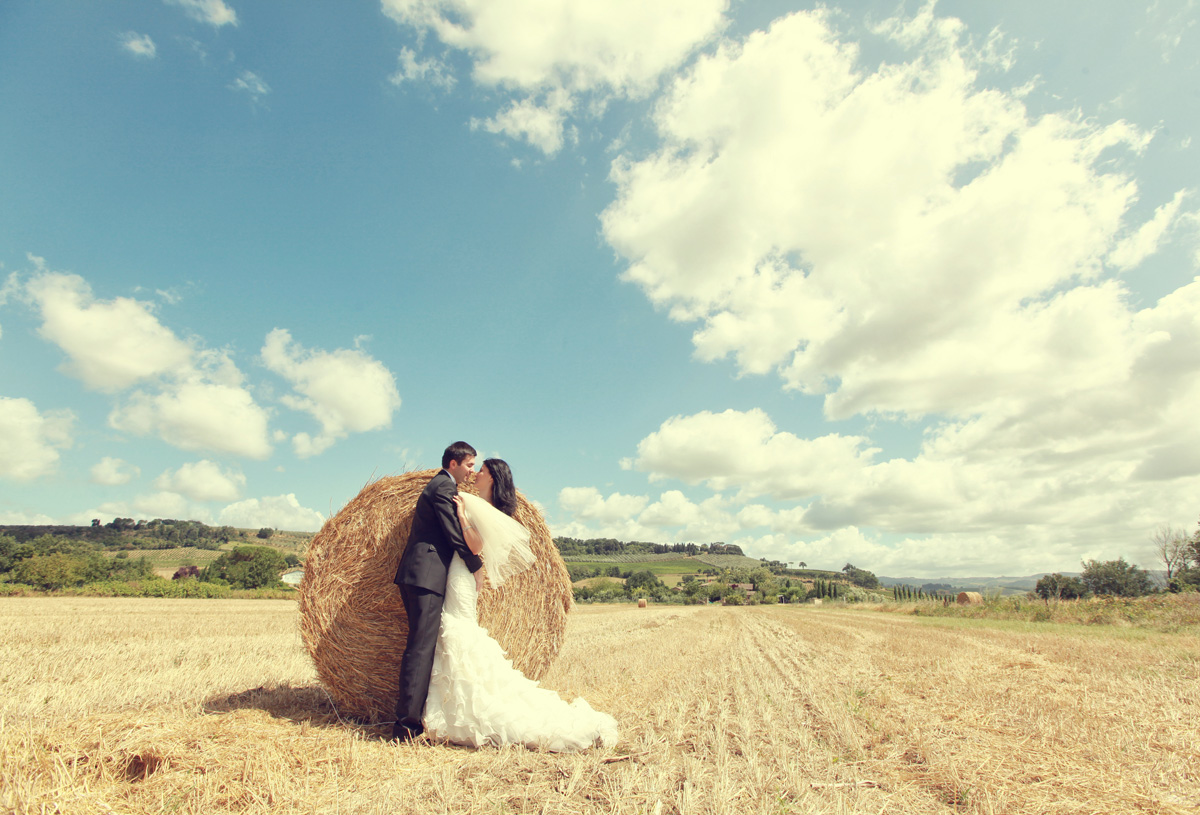 These locations usually have a rich history of dairy or sheep farming. But nowadays, many of them no longer function, except as beautiful (and expensive) event spaces that hearken back to a perceived romantic, rural life. They are undoubtedly farms, at least by common conception – a big old barn with a hayloft, a sprawling 1800s home, a three-rail fence, maybe even a token veggie garden.

But the fact of the matter is that they don’t do that one thing that makes a farm a farm: produce something. As more and more farmers find themselves relying on income that has nothing to do with selling food, is the essential nature of their work in danger?

I grew up in a rural area in Virginia that has a rich agricultural heritage, but is a stone’s throw from Washington, DC. I’ve watched a transformation take place over the past 15 years, and it’s one with which many others are familiar: as large, conventional, working farms are sold off, they become subdivided for housing developments. But the decline in those types of farms has given rise to another type of farm – farms whose secondary, if not primary purpose, is for tourism.

It should be a good thing that city folks are finally sitting up and paying attention to, or even envying, their rural counterparts, right?

The craze for rustic, weather-beaten barns, long farm tables and the other aesthetic trappings of traditionally conceptualized farm life has reached a fever pitch. We demand it in our weekend getaways, our dining experiences, and our leisure time. We travel to “farmstays” where we can pet sheep and book facials; we shell out cash for farm-to-table cuisine and go apple-picking. But many of the spaces that offer these activities are working farms that must do so in order to supplement their business, or are once-working farms that have found they can fare better offering a carefully curated version of farming to those willing to pay for it.

Nostalgia for farm life or animal husbandry is nothing new. Idealized pastoral scenes can be identified in Hellenistic paintings, continuing through the Renaissance and on into the 19th century. Literature has long taken advantage of the apt metaphors of country versus city life and of the imagery of the rural landscape. The “pastoral ideal” appeals through romanticizing the simplicity of the unindustrialized past and glorifying a time when middle-class folks didn’t wake up early for hectic commutes but to tend to chickens.

If one believes that rural and agricultural economies are important, it’s hard not to be encouraged by the trendiness of farms, farming, and the pastoral aesthetic in the upper middle class. It should be a good thing that city folks are finally sitting up and paying attention to, or even envying, their rural counterparts, right? I talked a few nearby farmers about what they thought about the glorification of the quaint farm aesthetic.

Molly Kroiz owns and operates a goat and cheesemaking business close to where I live. Kroiz and her husband, Sam, moved from the Pacific Northwest to make cheese on her husband Sam’s family’s land. She expressed measured optimism about the trendiness of the farm aesthetic: “On the whole, I think it’s a good thing,” she said, “Anything that can tip the scales of profitability for small farms is good because it means more people, especially young people, may see farming as a viable career, and that more existing farms can stay in business long term.”

Kroiz and her husband are in the process of restoring a historic barn, and they may eventually branch out into the events business, like weddings. But she was cautious about the transition. “I think that we may run into issues with couples wanting a ‘farm’ atmosphere, but perhaps not the reality: that there are animals living here, and therefore certain smells and a certain amount of poop, etc. must be expected.”

Like Kroiz, other farmers I talked to pointed out a primary denial of the realities of farming in the public’s appetite for the farm aesthetic. Kevin Grove runs a small, successful veggie farm in Lovettsville, Virginia, supporting CSA shares, selling produce at farm markets, and supplying local restaurants.

Grove was blunt about the fact that he thought his farm didn’t meet the public’s idea of what a beautiful farm is. He says his farm “is not as picturesque as a larger farm or an animal farm would be, with lots of open space and nice buildings and fences.” Instead of open spaces, for instance, he plants “rows and rows” of vegetables. Investing in farm tourism is “tempting” but his identity as a farmer would be imperiled, he says. 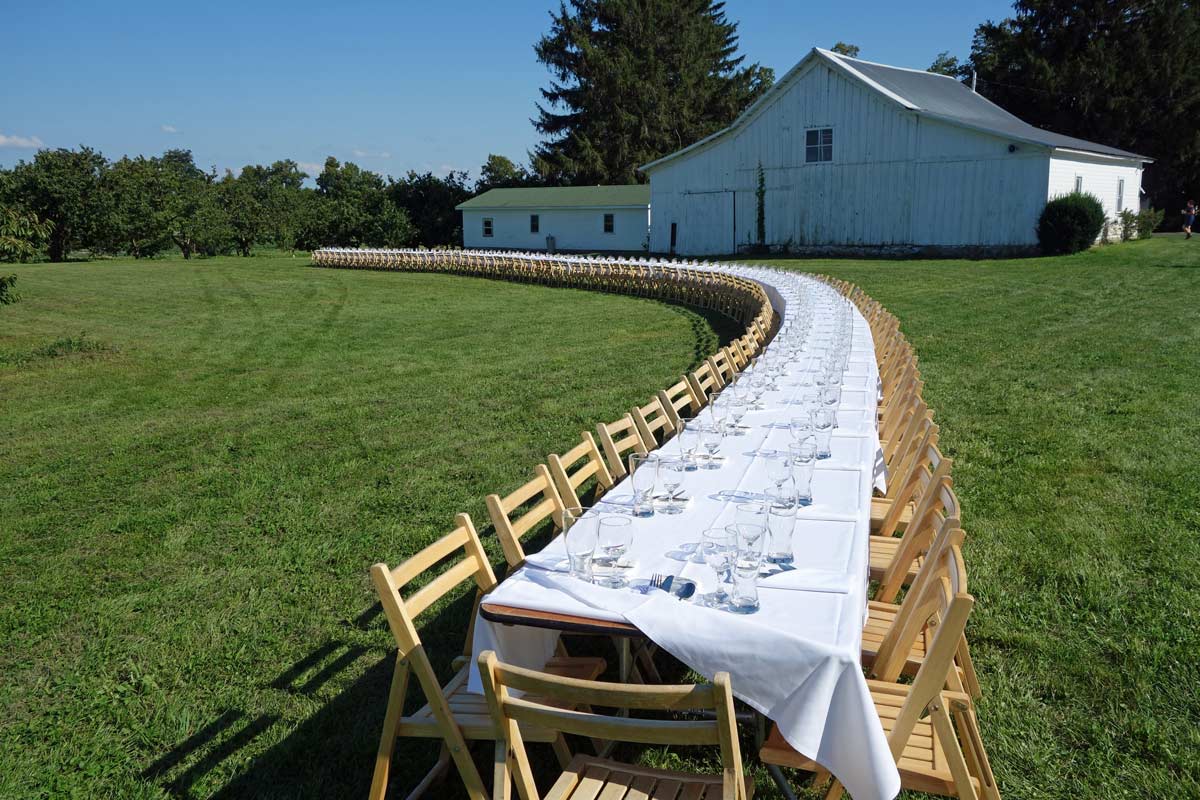 Kroiz and Grove echoed the concern of others I have talked to in the farming community: That consumer demand for the romantic pastoral ideal means denying the realities of farming and production. Agritourism, to be fair, has virtues beyond mere production: promoting of conservation of open space, historic preservation, bringing city-slicker money into rural communities, and just generally getting folks outside. But does the trend of farms-as-romantic-spaces distract farmers and consumers from the primary goal of farming?

In a sense, we’re incentivizing farmers to use their limited resources to perpetuate a romantic stereotype that consumers enjoy, rather than to spend money on functioning, sustainable (but perhaps not magazine-beautiful) models of local farming. One of the strangest parts of this phenomenon, to me, is that we live in the age of Michael Pollan and Eric Schlosser, in the era of a now decades-long public advocacy campaign to try to expose the underbelly of much of the world’s agricultural systems — and yet, we continue to (literally) buy into an image of farms that is unrealistic and uncommon. This love affair also skews the way we conceptualize modern farming.

Ask a kid to draw a picture of a cow, and they will likely draw it situated in a green field with a large red barn. But most cows are raised in something more akin to a warehouse. The massive amounts of manure they generate may leach into local groundwater supplies, and the antibiotic prophylaxis they receive in their feed every day leads to a meat supply in which nearly half of all meat is contaminated with antibiotic-resistant bacteria.

The gloss of a beautiful farm made for spectatorship allows us to avoid bearing witness to the reality of farming in the U.S. and stunts real conversations about the future of agriculture.

Let’s add the farmer to the picture. Our hypothetical kid will probably draw a classic Old MacDonald character, white, male, overalled and straw-hatted, or perhaps the kind of rugged, earthy man portrayed in Dodge’s now-famous “God Made a Farmer” Superbowl commercial. In reality, Old MacDonald exists in far fewer numbers than we might realize: out of over 313,000,000 people in the United States, only 1% label their profession as “farming”. Or maybe, rather, the farmer exists, but should appear in the drawing in the business suit he wears to his day job: only 45% of farmers can claim farming as their primary occupation.

The kid would probably not draw a crew of Hispanic laborers, who do the lion’s share of production in this country, and of whom nearly 7 in 10 were born outside the United States. Their faces are rarely equated with the pastoral ideal of American farming.

The gloss of a beautiful farm made for spectatorship allows us to avoid bearing witness to the reality of farming in the U.S. and stunts real conversations about the future of agriculture. Those who love the quaint farm aesthetic may want to support conservation, safety, fair pay for farm workers, and the humane treatment of farm animals – all things that seem to go hand-in-hand with the cozy agricultural stereotype. But without real work, on a policy level and on a consumer level, quaint farmsteads will remain just that – quaint, dated, and accessible to only a few.

Those sorts of establishments are hollow alternatives to what working farms could and should be: Real, vibrant contributors to a rural economy that is representative of and fair to farmers and farm workers, the animals they raise, the ecosystems they steward, and the consumers they feed. Inasmuch as we, as consumers, only put resources towards enjoying farms through starry eyes, we delay that vision.

Sarah Searle is a rural Virginia and Washington, DC based writer. She has degrees in international politics and public health, and her writing on food, rural economy and culture reflects this broader background. Sarah contributes to food and wine publications both in print and online, including her personal blog, a popular collection of recipes, stories, and essays focusing on home cooking and food, gardening, and travel.

Popular
7 Smokable Plants You Can Grow That Aren’t MarijuanaBrian Barth
New Solar Panels Allow Farmers to See the LightNaoki Nitta
6 Differences Between Llamas and AlpacasAndrew Amelinckx
Goat Sex: Everything You Wanted to Know But Were Afraid to AskAndrew Amelinckx
The Cold Swim HomeMarcie Callewaert
Explore Modern Farmer
Related
Environment, Labor, Water
California Farms and Farmworkers Attempt to Recover From Record FloodsNaoki Nitta
Books, How-To, Lifestyle
How to Turn Your Garden Into a Business, No Matter the SizeEmily Baron Cadloff
Food Security, Labor, news
A New Egg Co-operative Has Hatched in the Western U.S.Lindsay Campbell
Food Waste, Plants, Technology
New Solar Panels Allow Farmers to See the LightNaoki Nitta
wpDiscuz
We use cookies on our website to give you the most relevant experience by remembering your preferences and repeat visits. By clicking “Accept”, you consent to the use of ALL the cookies.
Cookie settings ACCEPT
Privacy & Cookies Policy