The Pull of Dog Driving: Fetch Is for Amateurs - Modern Farmer
Animals, Lifestyle

The Pull of Dog Driving: Fetch Is for Amateurs

Taking the dog for a walk is one of the obligations of dog ownership, no bones about it. But what if you could get your dog to take you on a walk? Or rather, a ride? 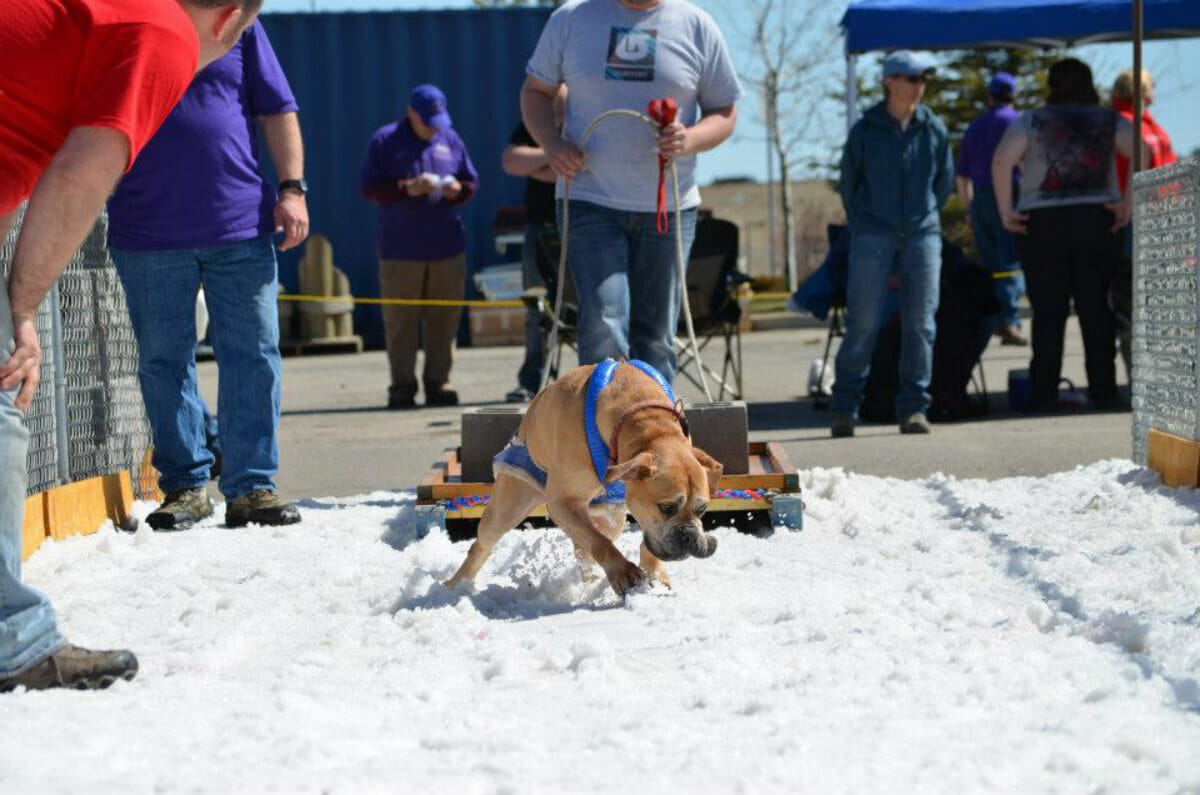 Outside of sled dog teams, hitching your family pet to a small cart in order to shuttle human beings around may sound outlandish, but it’s just a regular Sunday for some canines and their owners. And if traveling in a dog cart seems a little too bourgeois, how about releasing your dog’s inner beefcake in a weight pulling contest that some liken to canine tractor pulls?

For many people, their initiation into dog driving is the result of a dog in desperate need of exercise and a job.

For many people, their initiation into dog driving is the result of a dog in desperate need of exercise and a job. This was certainly the case for Katie Mattison’s dog Dudley, a boxer and Old English sheepdog mix. “I adopted Dudley when he was two and I needed an energy-intensive activity for him so he would stop tearing up my house,” Mattison, of Nyack, New York, says.

Mattison, who has a background in horses and carriage driving, trained Dudley to pull her in a specialty-built dog cart and drove Dudley for about six years. “I took all of my driving know-how from the horses and put it into my dog,” she says. “But I’m atypical in that regard. The bulk of people who drive their dogs are not horse people and they don’t have carriage experience.”

There are considerable differences between dog driving and a horse pulling a carriage. For starters, there are significant anatomical differences. “Dogs can’t handle weight pushed directly on their backs unlike a horse,” Mattison says.

Training and motivation are different for dogs as well. “Horses pull because they are being driven away from something but for a dog it’s supposed to be fun,” Mattison says. “The dogs are running toward something. It’s like, ‘Hey! We have a destination! Let’s go!’”

Dog driving is best suited for larger, working breeds such as German shepherds, Swiss mountain dogs, and Saint Bernards. A typical cart can weigh between 25 and 45 pounds, plus your own body weight. The golden ration between what a dog can pull over long distances and his own body weight is 3:1. But before you go on a diet to lighten Fido’s load, here’s another option: just add more dogs.

While most dog drivers have singles or pairs, four or even five-abreast is common for Darlette Ratschan, of Santa Clarita, Calif. Ratschan has driven dogs since 2000 and wrote one of the few books on the subject, called “Travel at the Speed of Dog.” Starting with two Portuguese water dogs, which are smaller than your average working breed, she now drives a pair of Bouvier des Flandres.

“The beauty of the carts we use is that you just attach more dogs on the outside,” Ratschan says. “It’s really easy.”

These carts can set owners back a few thousand dollars — they’re not the kind of thing you find on sale at PetSmart — and even after this initial investment, the training required to prepare a dog for driving makes this sport a long-term hobby. “It’s not for the faint of heart,” Mattison says. “If you’re going to go in, you’ve got to go all in. You can’t half-ass your way through the training, because that puts you and your dog at risk.”

Mattison’s Dudley, who is now retired from pulling, could reach up to 21 miles per hour and Ratschan has topped 18 miles per hour with her team of four. Most dog drivers use trails in parks and neighborhoods as well as beaches for recreation so safety around cars isn’t really an issue. Instead, it’s both other humans and other dogs that tend to be a challenge.

“I think other loose dogs are the biggest problem,” Ratschan says. “Also other animals like squirrels and children running out in front of you at the last minute.”

With all this potential for obstacles and distractions, it’s no wonder a driving dog’s most important training lesson is the command “Stop!” Unlike horses, there’s no bit in the dog’s mouth. Drivers use a combination of voice commands and reins that exert pressure on the dog’s harness to get the animals to halt. Some carts will even have brakes on the wheels.

If the thought of careening around parks behind a galloping dog isn’t your cup of tea, there’s another option involving dogs pulling things that aren’t you. That would be a sport called weight pulling.

The International Weight Pulling Association (IWPA) describes its sport as “akin to a tractor pull.” Dogs compete to pull the most weight in a cart behind them a distance of sixteen feet in 60 seconds. The dog that pulls the most weight wins.

Sean Hammell, board member within the IWPA as well as lead for the Western Canada Pull Club in Calgary, Alberta, was lured to the sport by that common theme – a need to exercise his Olde English bulldogges.

“Most people are drawn to this sport because they are looking for a way to give their dogs an outlet for exercise,” Hammell says. “We see people who want to build a better bond with their dogs as well.”

Dogs compete against animals in a similar weight bracket, which means anything from Mastiffs to Chihuahuas can participate. The most competitive breeds, however, are those with a sled dog background or bulldog-types.

“Sled dogs have been bred to pull for hundreds of years so it’s in their blood,” Hammell says. “Bulldog-types have a certain stubbornness which helps them in this sport. I have seen dogs from Chihuahuas to beagles to whippets and greyhounds all compete.”

This naturally begs the question: how much can a dog really pull? Debbie Lee, regional representative with IWPA from Gates, North Carolina, was at the IWPA National Championships this May in Cicero, New York, and says she’s seen all sorts of breeds do incredibly well. “There was a little dog this year at the championship who could not have been more than three pounds,” Lee says. “His name was Nano and he pulled a cart about 300 pounds. He was the cutest little thing.”

Most dogs in the championship pull on average between 25 and 40 times their own body weight, which is respectable. But then you have dogs like Kora, a Staffordshire bull terrier, who received first place in her weight division of twenty pounds and under – the same class as Nano. Nano may be cute, but Kora’s in a league of her own – this 16-pound dog pulled 1,550 pounds. That’s 96 times her body weight. Larger dogs can pull well over one ton.

“It’s like a mini-Olympics for animals,” Lee says. “The whole thing about weight pulling is good trainers, good pet ownership, and good dogs. They have to want to do it, they have to have confidence in themselves, and it has to be fun. If you can’t guarantee those things, you’re wasting your time.”

A common thread in both sports is the fun factor and participants report an increase in popularity for both driving and pulling. Forget fetch with your four-legged friend – there’s a new sport in town.

“Everybody has their own story,” Lee says. “I just love my animals.”