Why a Book About Zombies Could Get Kids to Eat Better

How a novel about bashing in zombie's brains with a baseball bat carries message Michael Pollan would approve of. 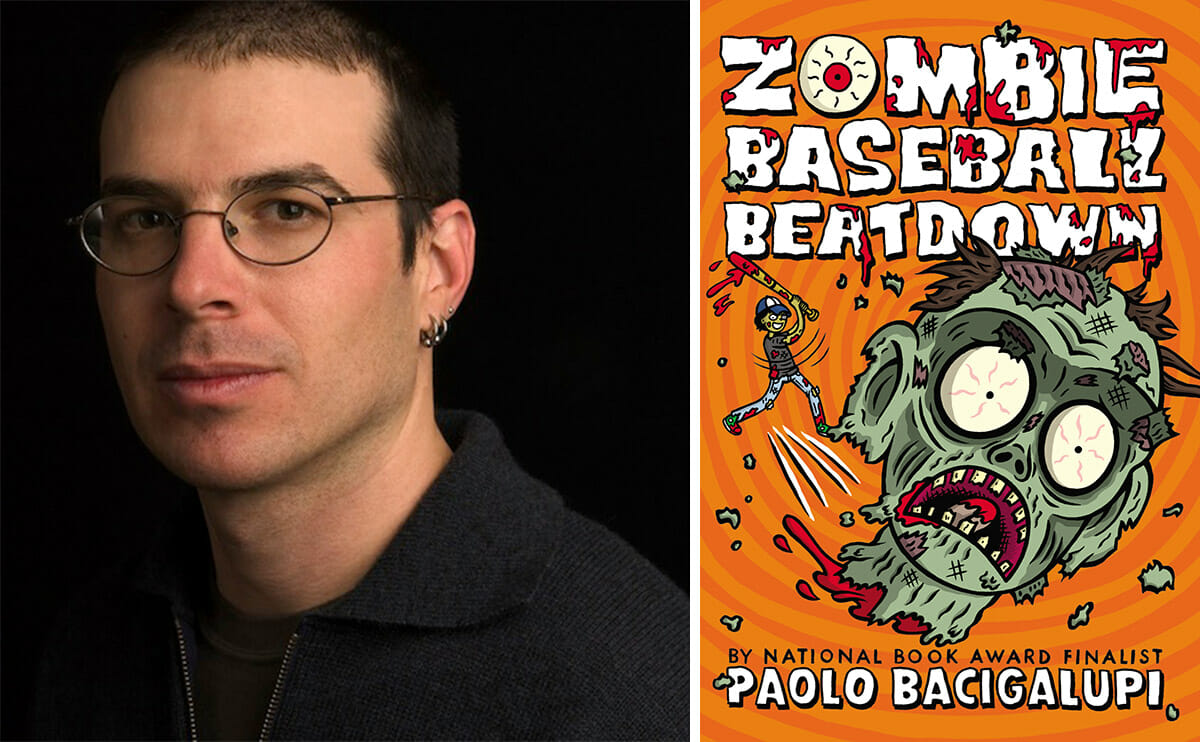 Modern Farmer: The zombie apocalypse has started in so many ways – how did you come up with the idea of it coming from a cattle feedlot?

Paolo Bacigalupi: It felt like an awfully natural assumption, actually. There’s an accumulation of facts that keep coming out of our meat packing industry: mad cow disease and how industrial systems feed our cattle, how we give them protein, the amount of antibiotics that we pour into cattle.

It’s a space where it’s already dirty and infested and loaded with antibiotic-resistant bacteria. So when I was kicking around an idea on how to build this book, of course that’s where the next horrific disease is going to arise. Almost every detail that you pull out of a meat packing plant or a feedlot is just loaded with awesome details about how horrific that system is. If you’re writing a horror story, it’s made to order.

MF: These kids are running around with baseballs and bashing in brains of zombies, and yet a lot of what they get truly grossed out by is what they see as they get closer to the cattle feedlot.

Almost every detail that you pull out of a meat packing plant or a feedlot is just loaded with awesome details about just how horrific that system is. If you’re writing a horror story, it’s made to order.

PB: Right. The real horror is actually just the way business-as-usual looks. Every time you see an account coming out of how a meat packing plant looks, it is fairly horrifying. I remember reading an article about a journalist who had gone undercover as a USDA inspector at one point, and a cyst on a carcass exploded all over him. And you’re just like, “Whoa.”

The business-as-usual qualities are amazingly gross, and there’s a reason why the meat packing plants don’t want covert observers watching how they process meat at high speed. This is very un-photogenic; let’s not show this, shall we?

MF: At one point the meat packing company uses ag-gag to basically cover up the zombie infestation of the town.

PB: You know, the original reason that I wrote “Zombie Baseball Beatdown” was to get kids reading. I wanted to write a story for a kid who wanted to read about zombies. Then there was this odd cascade where I needed a reason for the zombie apocalypse to happen. I was already thinking about setting it in small town America. Oh! Local meat packing plant, I love it! A rural plant in a small town.

Once you’re inside the meat-packing plant, other ideas started really coming onto the page. The way workers are treated, the kinds of workers that meat packing plants hire, how they exploit their workers, things like that, which leads into questions about identity in America and immigration.

It also leads down these other paths, which are things like the ag-gag laws, how these big companies manage their public personas and how they work legislatively to keep their reputation squeaky clean. But all of that came into the book mostly by accident. You add in a meat packing plant, and suddenly you’re tripping down this long slippery slope of all these other strange things. It was kind of the gift that kept on giving.

MF: It sounds like you started wanting to write a zombie novel, and the food politics fed into it as you progressed along.

PB: Books can be a lot of different things all at the same time. That’s been my experience with almost all of the stuff that I’ve written, actually, where I’ll have certain ideas that I’m interested in working with. I’ll have certain goals or certain audiences that I want to talk to – and then there’s also my own values. All those things end up getting mixed up inside of a story.

It’s two things, really. I want my stories to be flat-out entertaining. I think that is the basic bar that every book owes its reader, is that it’s supposed to be an entertaining read. If you’re going to write about meat packing plants or GMO foods or politics or anything else, as soon as you go too far away from the idea that you owe your reader their entertainment, you get into that really didactic space where you see a lot of political literature. Even if you’re sympathetic, you say, “I’m bored” and put the book down.

So there’s the first part where you want to entertain. But other thing is I have to believe that what I’m writing matters on some level. That helps me push through to the end of the story; I have to believe that this story needs to be told, I have to feel like there’s some reason for this book to exist, that it actually serves some purpose in the world.

I mean, if I’m going to kill as many trees as I’m going to kill to have a book published, I want the ink on those dead trees to have some value. And so that’s another part, and that seems to be something that ends up infusing a great deal of my writing at this point, where I want it to be about big ideas and important topics that are worth cracking in and exploring.

MF: Food systems are something that you’ve been writing about for a long time. In your novel “The Windup Girl,” you create this dystopia based in a world where GM crops run amok.

PB: When I was writing “The Windup Girl,” I was really interested in the idea of what total corporate control of food would look like. You get an idea of what that looks like when Monsanto comes after farmers for planting a patented grain, the idea of food as intellectual property.

Corporations have to maximize profit – it’s in their nature, it’s not their fault, it’s what they do. They have quarterly yields and do a good job for their shareholders. And inside of that matrix, that’s going to define all of their behaviors.

As much as any major food corporation talks about feeding the world, what they’re saying is we feed our shareholders.

MF: In “The Windup Girl,” you play that out to an apocalyptic end. It’s a world where only GM crops can grow ”“ everything else is wiped out.

PB: Yeah. My idea was if I’m a company and wanted to develop total control, well, first of all there’s the terminator gene. Second of all, I want everybody to only be planting my food, so I’m going to release plagues that wipe out everything else that isn’t mine. Now everybody does need my food.

As much as any major food corporation talks about feeding the world, what they’re saying is we feed our shareholders.

A lot of science fiction does that. You look at some trend like the corporate control of food, and say, alright let’s turn the volume up to eleven on this. What does it look like if they control everything, if everyone is dependent on them?

And then you get to play in that world for a while, and give readers, ideally, a visceral experience of that. And when they read the newspaper, suddenly it’s been contextualized because they’ve seen the version that’s so horrific that a passing news story about Monsanto becomes relevant to them in a way that it wasn’t before.

MF: In your more recent short stories, you’ve moved away from GM crops to look at the implications of us living on a warmer earth.

Climate change is this interesting thing because we’re spending so much time in the United States in denial that it exists. And that’s amazing to me, because it’s like this collective decision to decide that data isn’t real. Data is now something that we believe or disbelieve. It’s this moment where we’ve lost track of realities, we seem to have lost the thread entirely. And then what does that mean?

That’s really the most fascinating thing to me about climate change. I was down in Texas during their drought a couple of years ago and Rick Perry was praying for rain. You have a viable political candidate running for president, and at the same time he’s praying for rain. This isn’t a national joke, this is a guy running on a platform that says that climate change doesn’t exist, but hey, you know, we’re in the middle of a drought, so let’s pray it away.

If I look at climate data, it says that your drought is going to get bigger and badder and more horrible over the coming years. Your only option, if you’re an engaged data-driven person, is not to pray for rain, but plan like that drought is coming for you big time.

Rick Perry praying for rain just felt like it encapsulated a moment. It was actually the moment where I decided that I was going to write “The Water Knife,” which is my next big novel. There was this moment where you just looked at that and you thought, “Wow, we are fucked.” We can’t even engage with this core idea that our world is changing around us.

MF: So that’s what “The Water Knife” is about?

PB: Sure. Little, Brown will love that I’m talking about my next adult book instead of my kid book. “The Water Knife” is set in the Southwest, and it’s all about a water war between Phoenix and Las Vegas. They’re fighting over dwindling supplies of the Colorado River. This is based on this understanding that we already know that Lake Powell is low, that Lake Mead is low, and that they’re only going to get lower.

It’s really a story about two cities looking at the future, and one of those cities deciding that it was going to pretend as though the future isn’t a big Mac truck coming to run them over, and the other one saying, “Wow, we’ve got to dodge somehow.” There are the ones who plan and anticipate, and the ones who live in denial. That’s the frame for the story.