Hay, Man: The Curious Life and Times of Scarecrows

From medieval roots to modern-day anachronism, the secret history of an effigy. 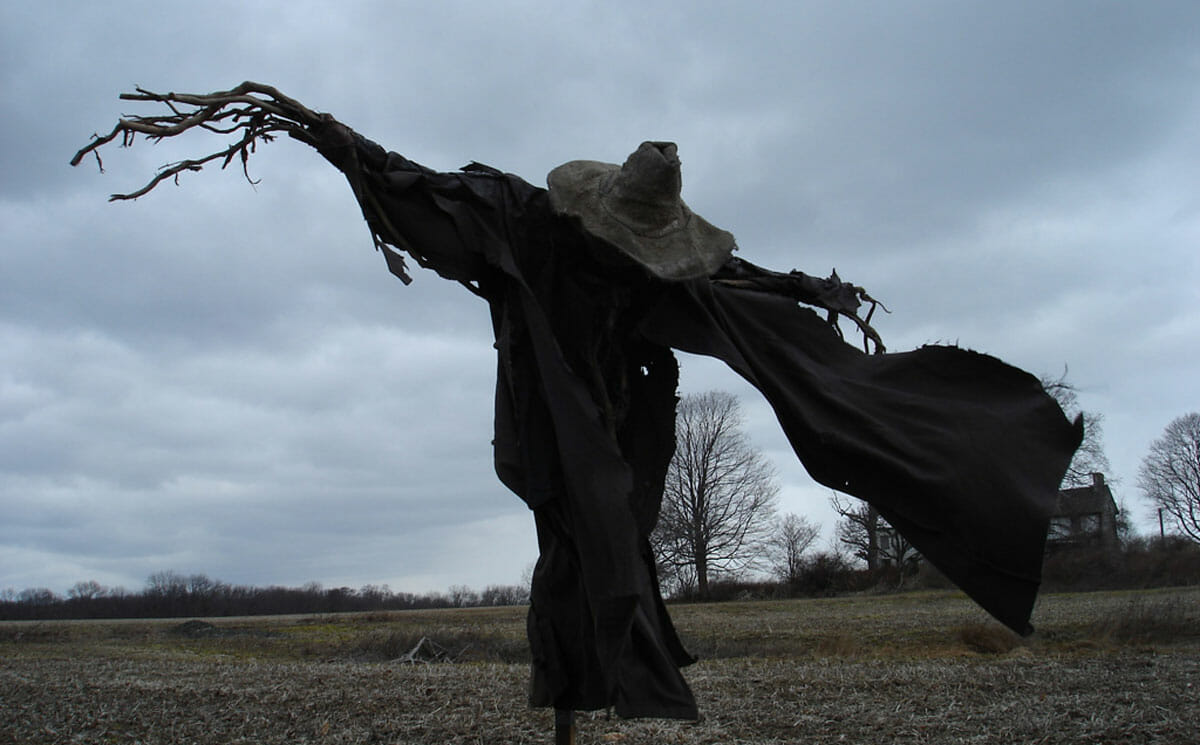 A dearth of children in the wake of the Great Plague, some historians surmise, led farmers to use adults to guard their crops, some keeping watch in straw huts as Native Americans did, evident in an 1585 watercolor by artist John White of Secotan, an Algonquin village in present-day North Carolina, says Mary Beth Norton, historian of Early American Farming at Cornell University. Others stood on wooden lookouts.

But as farms grew larger, in their place human-like effigies rose from the fields and thus was born the scarecrow.

Its symbolism is universal, but the original scarecrows were nothing like the now familiar straw-stuffed icon of Halloween. Scarecrows, sometimes bearing an animal skull or rotting produce, were placed in fields in the spring and were burned after the Autumn harvest in celebration, their ashes returning nutrients of potassium and nitrogen to the soil. In Great Britain they are known as hodmedods, murmets and Hay-man, Tattie bogle or bodach-rocais (old man of the rooks). To the Bengali’s it’s a kaktadua. A straska to the Czech’s. The Russians, a pugalo, just to name a few.

Through the ages their makers worldwide have fashioned the often maudlin-looking figure to reflect images of the occult, of customs, culture, mythology, superstitions or religion. A scarecrow hung with arms outstretched on a wooden cross echoes the crucifixion as portrayed in this etching by Jim Yarbrough. To a farmer they may simply be a symbol of the death and resurrection of the crops.

Some (such as the authors of website Occult View) suggest that the scarecrow, in addition to mirroring Christ on the cross may have originally been a severe warning, a “no trespassing” symbol, likening it to the deeds of Vlad the Impaler (so named for his reported propensity for impaling and displaying enemies) or sacrifice, an offering in turn for fertile fields. In more recent times, cartoonists have skewered politicians by depicting them as scarecrows. A British wheat farmer, hoping to scare off pigeons ravaging his crop, built a scarecrow of Lady Gaga as she appeared on the 2010 Brit Awards.

A definitive history of the scarecrow has never been penned. What is known is that among the first field “gods” were Japanese “kakashi”, a deity of knowledge and agriculture such as Kuebiko who is unable walk and therefore simply stands in the fields. American folk art historians say scarecrows are in a class known as “ephemerals” in that they don’t last long. Snowmen and harvest figures are also counted among the ranks of ephemerals.

In ancient Greece, wooden figures of Priapus, god of fertility, horticulture and viticulture, were placed among crops as guards. Images of Norse god Odin and his ravens, Huginn and Muninn have also been cited as a model for early scarecrows.

No matter their cultural roots, scarecrows worldwide were conceived of to perform a specific task: to frighten.

In the U.S., their name suggests that crows are their foremost enemies, but farmers also use scarecrows to ward off doves, red wing blackbirds, grackles, sparrows, turkeys and quail that crave not only fresh seed but the sugar from young corn. A farmer’s field from planting season to harvest supplies birds with nutrients needed to live, says Kevin J. McGowan, a specialist on crows at the Cornell Lab of Ornithology.

Crows “walk on the ground and forage, looking for food in the top two inches of soil. Along with seeds, they seek nuts, earthworms, baby moths or beetles,” says McGowan. More so, they have a keen eye for soil that has been turned as it offers up hidden treasures. Young corn is akin to a mill turning stored starch into sugar and is highly sought by birds. But crows tend to forage a field in flocks, McGown says, adding “and they hit hard.”

Once a plant has used up its sugar, birds will depart, leaving fresh green vegetation for the next feasters such as deer. Birds then return looking for munching insects.

Today, many young people may be more familiar with scarecrows from Halloween decorations than the field.

The scarecrow has vanished from the American landscape, replaced by chemicals and high-tech mechanisms such as a digital scarecrow that emits ultrasonic waves.

Some farmers prefer to tend land the old-fashioned way, eschewing tractors and engine-driven plows and putting up scarecrows to watch over their small acreage. But for the most part, the scarecrow has vanished from the American landscape, replaced by chemicals and by high-tech mechanisms such as a digital scarecrow with infrared sensors that emits ultrasonic waves. The scarecrow has hung on in some parts of the world (like Carcosa?). They are still widely used in Japan by rice farmers who make them out of old doll heads and used store mannequins as well as in rural towns throughout Europe. But the hay-man is rarely seen in the U.S. and other regions where large scale agriculture is common, save for in films and literature. (Scarecrows recently starred in a widely viewed promotional film for Chipotle.)

But in the workshop of a Bucks County, Pennsylvania an artist known as Pumpkinrot quietly crafts hauntingly beautiful scarecrows from found organic matter (think petrified branches and roots) and places them in fields across the state. Several of his creations even ended up in a horror movie, “Mr. Jones” released in May 2014.

Rot insisted on email-only communication and never revealed his real name, saying only that he’s in his early 40s. He says he was drawn to scarecrows upon seeing them as a child when his parents took him on long drives through rural Pennsylvania.

“I remember being very curious about the farms and wondering what it might be like to live that different life,” he writes. “It seemed very isolated to me. And we’d always see crude scarecrows in the fields…making that life seem more of a mystery to me.”

His first creation had the same name he now calls himself. The artist created PumpkinRot on a lark as an entry into a local Halloween design contest. Corpse-like with an oversized pumpkin head, it came in second place with “first going to a family-friendly Humpty Dumpty scarecrow.” The passion ignited, Rot entered yearly, his designs drifting further and further from the figures donning straw-stuffed overalls and fedoras. Eventually, rather than compete, Rot would build the scarecrows, name them and deposit them on farmland near roadsides, staying distant but watching the reactions of people as they drove the secluded roads.

Two years ago the Stan Winston School, known for producing some of Hollywood’s best prop designers, brought Rot’s scarecrows to Hollywood. The director of the horror flick “Mr. Jones” (a couple go into the woods, bad things happen) sought a scarecrow artist to make twelve for his film. The school had been following PumpkinRot’s work and realized they had found the perfect project for him.

The scarecrow designer known simply as Rot built a website and is now followed by enthusiasts worldwide.

“I’ve worshipped that prop shop since I was a kid. So to think that they knew of my work … what a crazy ride,” wrote Rot.

Although PumpkinRot does not typically sell his scarecrows, he would if a farmer decided to return one to the fields for use. The idea of putting one to work is bittersweet. It’s a lonesome post, Rot says, standing in the fields for days and months as weather and the elements slowly turn the scarecrow to rotting, disintegrating tatters.

Years of building them has given PumpkinRot plenty of time to think about the role of a scarecrow, even as they have disappeared from the fields.

“There was an isolation and loneliness to the scarecrows,” says PumpkinRot. “You never see two together. They’re always alone, doing some important, solitary job for the person who made them.”

Pictured above: A PumpkinRot creation in a field. Image courtesy PumpkinRot

Odin’s birds Hugin and Munin were ravens not crows.