This Guy Raises and Trains Mink to Hunt

Minks are some of the most vicious animals on the planet. When they escape from farms, this Mormon financial planner trains them to hunt. 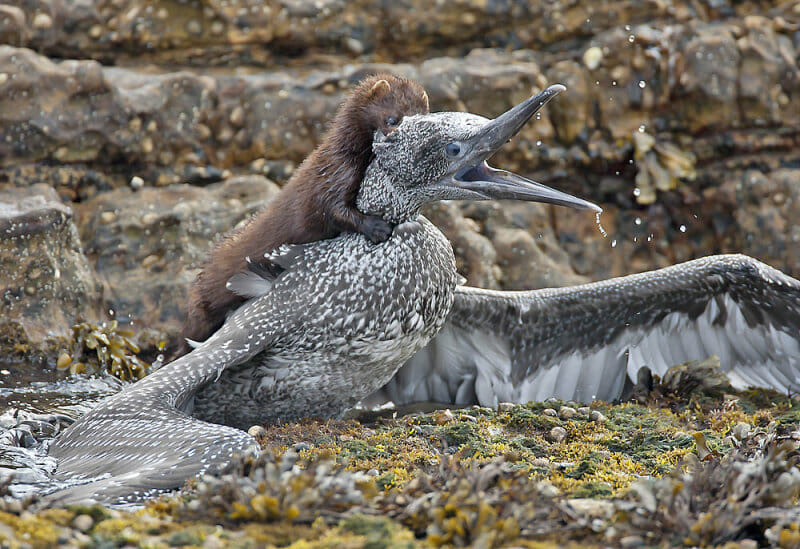 I’m a financial planner for my day job, but I also get paid to hunt muskrats and brown rats with mink. I show up with my mink in my Lexus and people are like ‘What’s the deal with this guy?’ I think I’m the first person in the world to do this.

It all started in 2003 when I moved to Lehi (Utah), a little town with a lot of mink farms. Everybody told me mink are untameable — they’re the most vicious creatures alive. I’ve heard them compared to ferrets, but only people who don’t know mink would say that. Ferrets have no jaw power, no drive, they’ve been domesticated to be pets. A baby mink will kill things that scare most ferrets.

If you’re a zoologist, a naturalist, a mink farmer or a trapper, they all agree how nasty this beast is. I saw a personal challenge here. I was a falconer, I trained horses and I trained dogs; I’ve messed with animals since I was a kid. I just needed a mink to work with.

Here’s the thing: Mink escape from farms all the time. They’re super-clever and hard to keep penned in. If you live next to a mink farm, you’ve had one in your garage — sometimes once or twice a year. It didn’t take long to find one wandering around a field, a female Blue Iris. I trapped her and brought her to my house.

Mink farmers had showed me their scars. ‘Here’s where one almost tore my pinkie off,’ ‘Here’s where one grabbed my face,’ all this gruesome stuff. One mink jumped up and hung onto a guy’s nose, wouldn’t let go. I really didn’t know what to expect.

I put on three shirts, four pairs of pants and a pair of high-topped cowboy boots. I had three pairs of gloves on my hands — welding gloves, medium-sized work gloves and tight work gloves. The only thing not covered was my face, just because I had nothing to cover it with. I was nervous about that.

I named her Murray (such a cool name for a mink!) and put her in a horse stall. It’s the middle of spring and I was dressed like the kid in Christmas Story, sweating like crazy. When I first approached, I always gave her somewhere to escape to. A mink will attack a bear if it has no escape route — no fear.

So I’d approach from the side, and I’d kind of herd with one hand so she’d run over my other hand. I did this again and again and again until I finally picked her up. She ran up my arm straight for the face! Luckily she never bit. To this day I have no idea if she had malicious intent.

After that, I’d visit Murray every day, doing the same routine. Eventually she got so tame, I started taking my gear off, layer by layer. I even trained her to come to a whistle. I was satisfied. I had no goal besides that, just wanted to get her tame.

Murray caught an infection in her neck and died early; literally a few days later I got a call from a neighbor. ‘I’ve got a black mink trapped in my garage. Can you come get him?’ Soon I was taming multiple mink just to prove Murray wasn’t a fluke — anybody found a mink, they’d call me. One day I saw some kids poking sticks at one: ‘We’re gonna kill a mink!’ I said, ‘You guys get out of here!’ and took it home.

Before Rascal, I had just been curious about mink, no real passion for it. But this guy was cool! Super smart and playful. He’d play fetch or I’d drag a rag on the floor and he’d wrestle with it. Rascal made me start to love mink.

I had a 20-gallon tank in his cage; I’d put live fish in there and watch him go after them. It got me thinking. Then I was reading this book called “A Sporting Chance”, about all these goofy methods of hunting like blowguns and hunting with cheetah and so on. I read about this guy trying to hunt with his ferrets, just goofing off. He wanted to get rid of the muskrats that were in his pond and tearing up his lawn and his backyard. So he takes his ferrets and sticks them in a muskrat hole.

It was a total wreck. The muskrat took hold of one poor ferret’s head and split it wide open. Then he almost drowned the other one — he just beat the snot out of these ferrets. The guy almost lost both of them. But I was like, ‘Huh, minks are way faster and tougher and meaner than ferrets. Could I hunt muskrat with a mink?’

Muskrats are super mean, they’re going to go after you if you get too close. They don’t even hesitate. I’ve watched videos where they’re intimidating dogs — they’re very aggressive and their teeth are quite sharp. I got bit through a welding glove and had a quarter inch hole through my finger. Plus they’re bigger than mink. Could I make this work?

I’m LDS — people call us Mormons. We can choose to go on missions for two years, when we don’t do anything but serve our mission and serve the Lord. We don’t go to movies, go on dates, any normal stuff. We also can’t do anything with animals. So for two years I just thought and dreamt about hunting with mink. It became an obsession. And when I got off my mission, the first thing I did was go around to mink farmers. I had only trained adults so far — I wanted a baby.

All the farmers shut me down: ‘Go away kid, I’m gonna call the cops on you.’ For all they know I’m a PETA guy pretending to be something else, then set the mink free in the woods. I even got detained by cops, more than once.

Finally after getting chewed out and detained and all this, I found a guy who would at least talk to me for a moment before he grabbed his shotgun. He’s out there shoveling mink crap into a wheelbarrow. He said he was busy so I just grabbed a shovel and started working with him. After 15 to 20 minutes, he lightened up, realized I wasn’t a creep. That guy sold me my first baby mink.

I got her when her eyes were still closed. I bottle-raised her — she thought I was her mom. I raised her up, trained her to follow me around. Didn’t take long for her to start trying to hunt. Their instincts tell them to dive under water or go in holes. When they see prey, they know what to do next. We’ve caught squirrels, rabbits, muskrats, chipmunks, mice, even ducks on accident. Duck hunting is illegal but good luck trying to stop a mink. ‘Bad mink!’: yeah right.

Our local parks had muskrats and brown rats galore. Just ridiculous numbers of them. We started hunting in the parks until some prick with a stick up his butt called the cops. The cops pointed out a sign that said Do Not Disturb the Animals. I said: ‘We’re doing a service for community are you really going to kick us out?’ Later I got in touch with someone at city hall and convinced them to pay me to clean up the parks. They used to get complaints about the rats all the time; now it barely happens.

I really love this work. My little mink that I have right now, she’s the sweetest little thing. She climbs up my leg the minute I open the cage, lays in my arms and licks me like a puppy. Then she’ll turn around and bite my wife the minute she gets too close.

I’ve been bit I don’t know how many times. I’ve had a 36-day-old baby fill me with pinholes. I’ve had a big old mink bite me right through my glove. I have a theory there isn’t such thing as a mink-proof glove you can still use your hand with.

Worth it? Absolutely. I love mink, I really do. I’m writing a book on minkenry right now. I’d like to teach as many people as possible about the possibilities. As long as, you know, they’re careful.

I am interested in a mink as a pet. However, I need to learn much more. I have watched some of your videos. I have ordered your book. I have talked with my husband about possible hunting places for a mink. I have no problem with a mink doing what God instinctively gave them, which is fishing and hunting. I like the idea of reward for the kill, then preparing the meat for future feeds, after freezing it. My husband hunts deer, prepares it, freezes it, then we eat it. I will keep in contact with you. I have much… Read more »

Solid work on minks ! it admired to pet one but don’t know where these little predators available ??

Joseph, I am interested in raising a mink from a baby. I too grew up with people bringing us wild animals, stranded, injured, lost, whatever. Where would you recommend I find a baby mink (preferably with eyes still closed)? I look forward to your reply. Scott

I watched your videos and breed AM Bulldogs. My last dog is up in age and I really want an American Mink. Let me know if you can help me.

wow, thank you so much for sharing your mink experience and why you love them. fascinating creatures.

Question: My kitchen window & patio overlook a creek with mink apparently residing on the opposite bank inasmuch as I occasionally see them. For weeks, perhaps months, I’ve been trying to track down the sound of a flat whistle, thinking it a bird, but yesterday saw 2 or 3 mink scampering the bank at which time I heard the whistle. Could that be the call of a Mink?

Hey man lol are you around MN