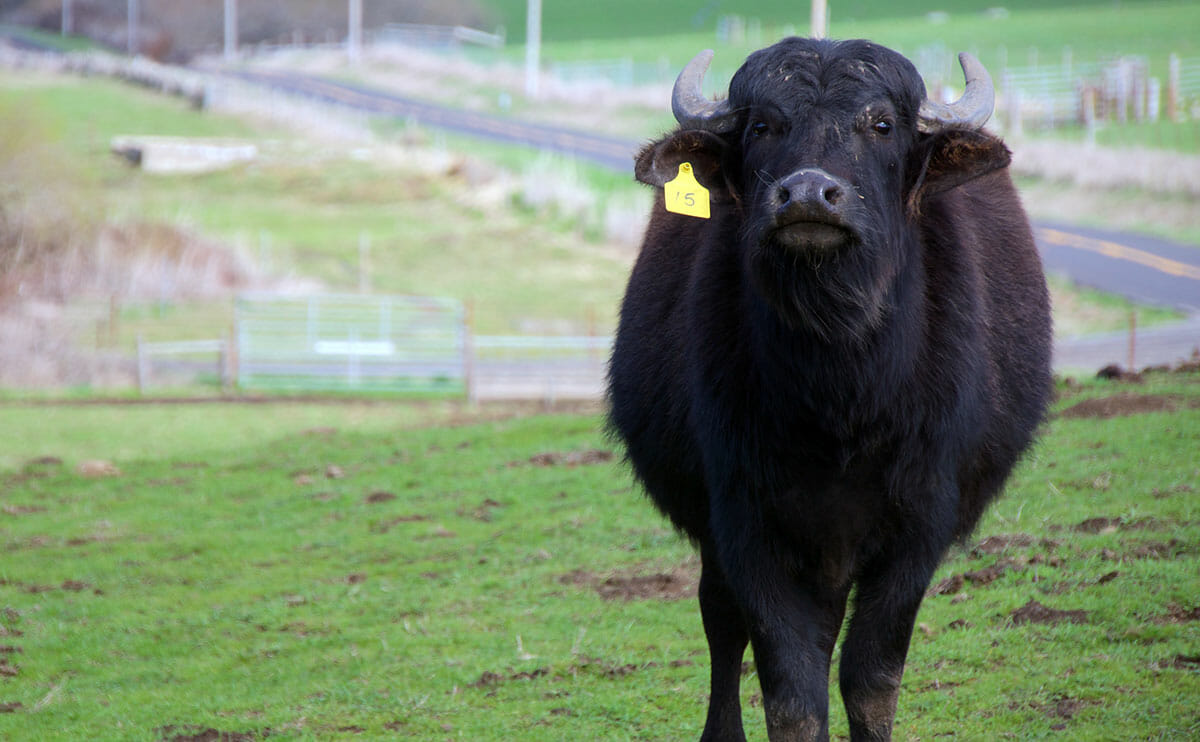 “He’s pretty much gotten everyone pregnant, except maybe a few with whom he hasn’t yet found a rhythm,” says Craig Ramini, owner of the Tomales, California operation.

He’s a dairy farmer with a surprising stock: water buffalo.

On one of Ramini’s seven leased pastures, we are surrounded by curious water buffalo named after rock stars. Resident bull Elvis is eying me skeptically, while Madonna agrees to sniff my hand.

Despite still being relatively unknown, there are small water buffalo farms all over the United States. A couple of miles from Ramini, his former business partner, Andrew Zlot, runs another local favorite, Double 8 Dairy, which supplies area restaurants from Napa to Oakland with its buffalo milk gelato. (I tried Double 8’s Dulce de Leche at La Condesa in St. Helena a few weeks ago and am happy to confirm the rich flavor and creamy texture.)

At the moment, the herds are still small, the cattlemen far-flung. In Wisconsin, Dubi Ayalon, ex-Israeli Special Forces officer turned farmer, sells his milk to the cheesemakers at Cedar Grove Cheese. In the South, hospitality industry veteran and restaurateur Antonio Casamento has around 30 water buffalo with mother-daughter names like Tequila and Margarita, or Bubble and Gum. “Once you get to know them, [buffaloes] are better than a dog,” he says of his herd’s genial temperament. The Italian-born farmer and businessman also operates the Mozzarella Bar café in Tampa’s Palma Ceia neighborhood, where he serves handmade cheeses including mozzarella, ricotta, and scamorza.

The burgeoning niche market owes the recent spike in popularity to the late Dr. Hugh Popenoe, a professor at the University of Florida’s College of Agriculture and Life Sciences. In 1951, Popenoe was working as a soil scientist in Thailand when he imagined how well water buffalo could clear Florida’s waterways. In 1975, in partnership with the University of Florida, he established the first modern, commercial water buffalo herd. At its height, his herd numbered more than 800.

Like Dr. Popenoe, most of the water buffalo farmers working today didn’t start out in cow pastures or milking barns, let alone separating curds from whey. “I grew up on the golf course,” Ramini says of his North Shore Massachusetts upbringing. For the better part of two decades, he was a Silicon Valley software consultant. When he hit 50, he felt called to do more personally fulfilling work. He had always loved big animals and fondly remembered his grandfather’s Italian restaurant. When his brother-in-law’s southern Italian wife mentioned her frustration in not being able to buy fresh buffalo mozzarella in the States, he saw an opportunity to do something few others had tried.

The modest Ramini Mozzarella creamery and milking barn – really, Ramini’s entire farmstead – is more like a winery than a traditional working farm, an intentional choice he made from the beginning. The fully renovated barn is unusually clean. Half-feral kittens tended by a local rescue group weave around our feet, hoping we’ll spill a few drops. There’s even an espresso machine, which Ramini uses to make me a velvety smooth buffalo milk latte.

The water buffalo enjoy the easy life of an artisanal farm. When they aren’t on the clock, they roam and snooze in the big sunny fields that surround the main barn. After milking, mother buffalo and their calves are given four to five hours a day to bond. Ramini doesn’t sell his water buffalo for meat, though some farmers do. Instead, he runs an adoption program (and currently, a waiting list) for buffalo that no longer fit with his herd. For humans on a Saturday farm tour, there’s a picnic area next to the calf huts and mozzarella samples freshly made that morning.

Ramini milks once a day, averaging one to two gallons of milk per day per beast. There’s a four-to-one conversion rate for his fresh mozzarella. Twenty-five percent of the milk weight becomes cheese weight. To put it another way, it takes 100 pounds of milk to make 25 pounds of cheese. Local chefs are his main customers, and there’s a waiting list of around 25 eager to try the bone-white di bufala.

Initially, he sank half a million dollars into the farm, knowing it would earn back slowly. Four years in, the milk of just 10 water buffalo has put Ramini’s small operation in the black. “Milking up to 20 or 30 would make a nice living,” he says. “Thirty,” he deadpans, “would be my high water mark.”

Working alone all day, Ramini spends a lot of time talking affectionately to his companions. “I’ve gone a little bit goofy to stay sane,” he concedes. Then, without a trace of self-consciousness, he turns back to coo at Grace Slick and her baby, Bonnie Raitt.

My first contact with water buffalo was when I was serving in Vietnam, if you know of any farm that is selling water buffalos please let me know. Thanks.

How to make butter from water buffalo milk ?

Hello Sir
We are planning to start a Water Buffalo farm in Texas, Let lets know if you can help guide us how we can import these in USA

Do you sell water buffalo milk for human consumption?

water buffalo are good eats by the way.