From tanning to baby oil rubdowns, how teenage pig groomers pamper their swine. 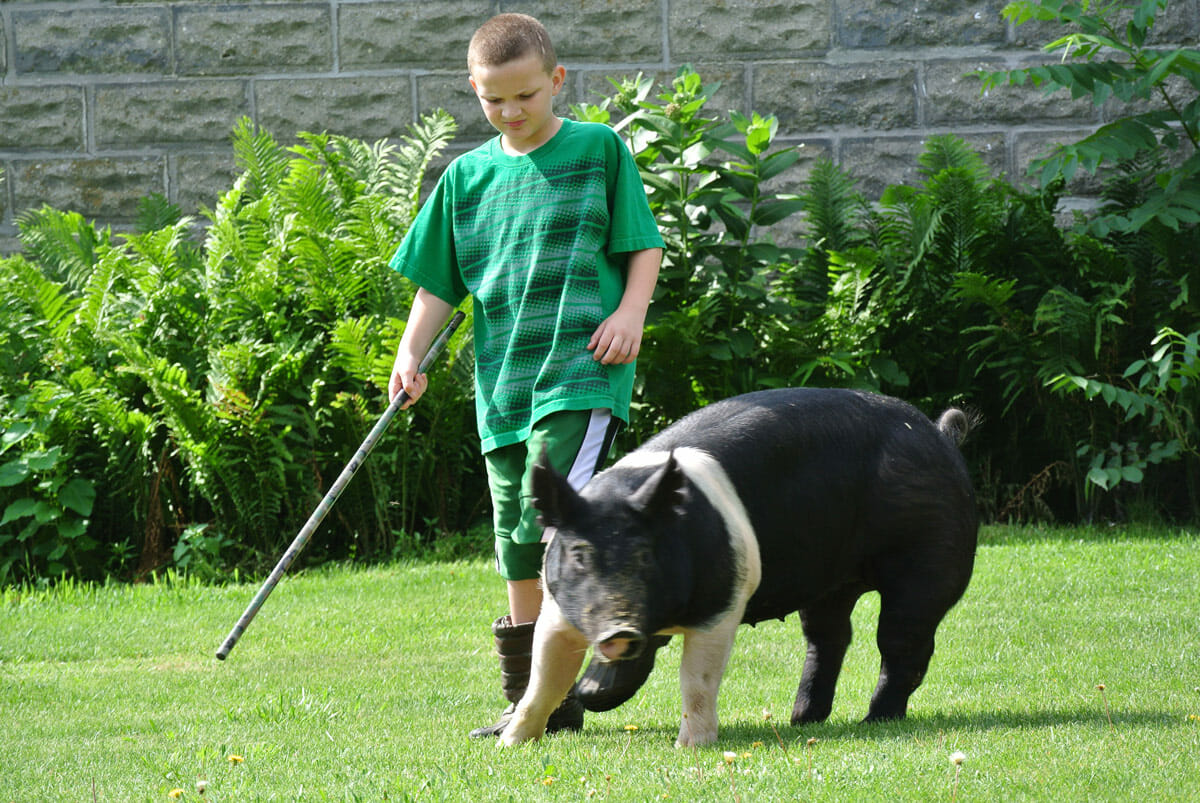 First things first: Pig prep takes time and dedication. Hogs are purchased young a few months prior to the show and the daily grooming starts immediately.

“You have to start ahead of time,” explains Maddy Bezner, a 17-year-old 4-H’er from Dalhart, Texas who has been showing pigs for nine years. “I start two or three months out from the show and work with the pigs every day.”

Working the pigs every day means different things to different kids, and even depends on what part of the country you live in. Just as humidity can wreak havoc on some people’s hair, hot, dry days can cause flaky, dull skin in a pig.

“About a month or so out from the show, you should start brushing and oiling your pig every day,” says Jake Sterle, 14, from Roland, Iowa, another nine-year showing veteran. “This makes the skin really shine.”

Daily baths are also a must to get the pig’s skin and hair shiny and smooth. “Having hair that looks shiny and fresh is appealing to judges,” explains Bezner. “I wash and rinse my hogs everyday. This loosens the hair up so it’s easier to work with. This makes a huge difference.”

‘About a month or so out from the show, you should start brushing and oiling your pig every day,’ says Jake Sterle, 14, from Roland, Iowa, another nine-year showing veteran. ‘This makes the skin really shine.’

Walk into any feed store and you’re likely to become overwhelmed at the plethora of shampoos and conditioners available for farm animals. Although most brands are acceptable for use – no designer salon products needed – not just any shampoo can be used for every pig. For example, to get your white pigs their whitest, purple whitening shampoos are available. But buyer beware: leave these on too long and you’ll have a purple pig instead of a white one, warns Bezner. “We use Mane and Tail shampoo,” she says. “Even though it’s for horses.”

As with every beauty regimen, exercise and diet also play a huge part in appearance. “Feed and exercise are the main differences between a winning pig and a non-winning pig,” says Pasqua.

“I walk my pigs three times a day,” explains Skylar Knapp, 15, from Greenfield, Indiana. “Once in the morning when it’s cool, once in the afternoon so they can get used to the heat, and then once in the evening, to build up their stamina.”

Walking pigs consists not of leashes and collars, but a long solid object such as a shepherd’s cane to guide the direction of the pig’s forward movement.

“Nutrition is very important,” says Jake, although his little brother Jackson admits to handing out marshmallows as a training treat. Every beauty queen is allowed an indulgence every now and then, right? As for daily diet, special hog feeds called “complete feeds” are formulated with specific balances of minerals and protein for maximum growth.

The scruffy look has not yet become a fad in the show ring and a clean-cut pig remains a judge’s ideal. This means haircuts and conditioning. A hog’s wiry hair requires daily conditioning and a week or so before the show, shearing takes place. Daily brushing keeps the spindly swine hairs malleable for that freshly coiffed look. “Most of the pigs actually really love brushing,” says Jake. “Sometimes they’ll lean into the brush.”

Not just any brush will do. Details like the harshness of the brush are vital. “It’s important to know that on darker hogs, it’s OK to use rougher brushes,” says Jake. “But on a white hog, you want to use a softer brush so they don’t get red when you brush them.”

One final detail to consider in the weeks before a show: a decent tan. “Before we take black pigs to a show, we let them tan in the sun,” says Bezner. “The darker skin makes them look more youthful.”

Letting the pigs out for an hour or so a day starting a few weeks prior to the show, Bezner also has a plan for tanning multi-colored pigs. “If it’s a belted hog [mostly black with a white band in the middle], we use baby powder and sunscreen on the white parts so they don’t burn,” she says. (No bacon jokes allowed.)

Just so there is no question of the time one must invest in prepping and maintaining a well-manicured pig, here are some examples of the time these 4-H’ers put in, keeping in mind these kids are also full-time students.

“Every day I’m at the barn for at least two hours,” says Pasqua. “I’ve given up sports and other extracurricular activities this year. It’s about dedication.”

When adding up Skylar’s three-times-daily exercise regimen, plus washing, brushing, feeding and the necessary belly rubs, she estimates her investment is on average five hours of barn time a day. “I try to treat each pig individually and spend time with it,” she says. “Like any child would want her own time with her parents.”

‘Every day I’m at the barn for at least two hours,’ says Pasqua. ‘I’ve given up sports and other extracurricular activities this year. It’s about dedication.’

The morning of the show requires some last minute touch-ups. Most kids offer their hogs one final sip of water and sometimes a quick bite to eat.

“That way they’re not super hungry when they go into the ring,” says Jackson. Even once in the ring, the pigs need to stay clean. Maddy brings a small plastic bag into the ring for last-minute pickups if nature happens to call her hog at an inopportune moment. And let’s not forget that the exhibitor is also part of the package.

Of course, a personal touch doesn’t hurt either. “I get down in the pen with them and talk to them, like you would a basketball player before the game,” says Skylar. “I tell them, ‘You can do this, you got this, just do your best.’ Then you go into the ring, show to the best of your ability, and don’t look back.”

Naturally, competition can be fierce. You might think vying for champion or reserve champion in the state fair after a season of hard work might make for some hardened competitors, stopping at nothing on their way to the top. But this isn’t the case at all. If there are meltdowns and drama queens in hog beauty pageants – referring to either the kids or the pigs – they must be few and far between, at least in the 4-H world. After all, the 4 H’s stand for: head, heart, hands and health.

“You need to have fun,” says Skylar. “This isn’t about just going in for a banner. It’s about doing something new and making new friends. It’s about having fun and doing what you love.” No one can say it any better than that.

Pictured Above: Jake Sterle takes his (well-groomed) pig for a walk. / Jodi Sterle