The Pigs That Eat at Las Vegas Buffets

Prime rib and cheese curds and crab rangoon - Bob Combs' pigs eat well from the leftovers of the prodigious buffet tables of Vegas. 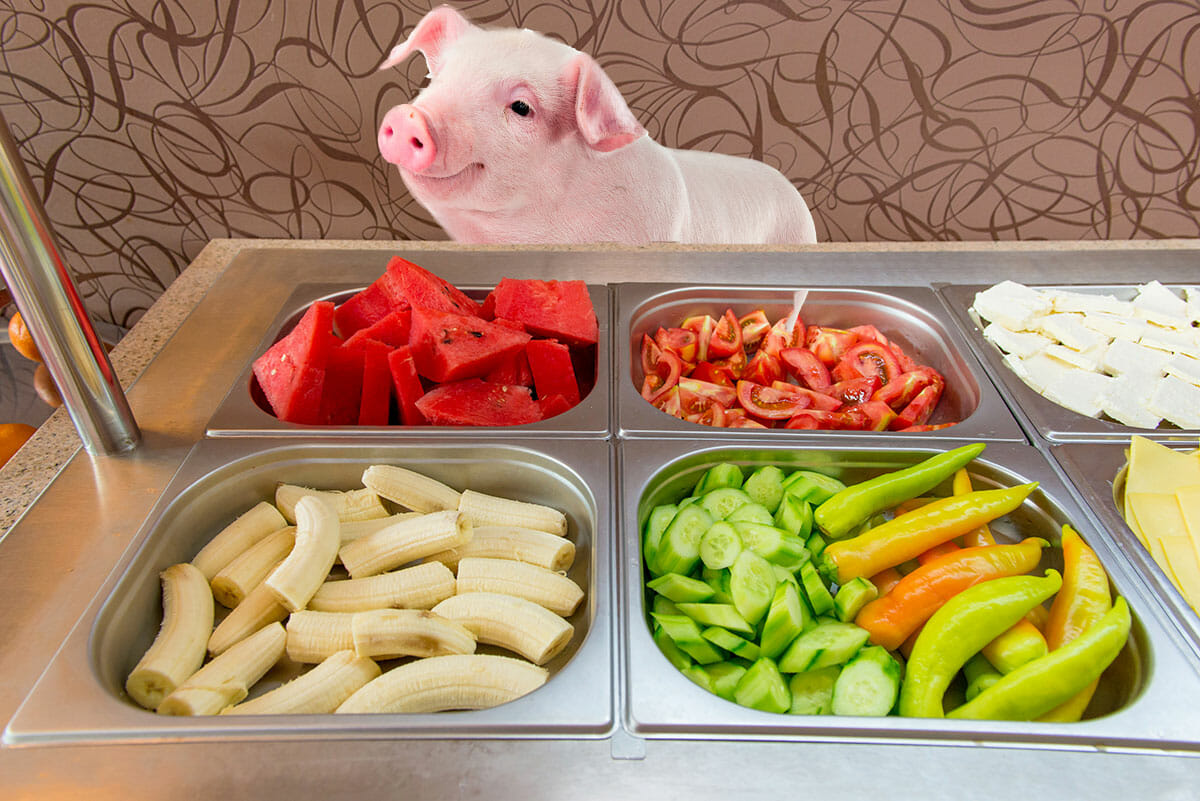 This story starts back in 1963, when Combs’ father was celebrating his 70th birthday in Las Vegas. At some point during the festivities, he stumbled upon the food waste streaming out of a hotel kitchen. His dad — more of a doer than a talker — had soon purchased a 160-acre pig farm in North Las Vegas.

His idea was basic: he’d haul away the Strip’s buffet leftovers, thereby providing free waste removal to the hotels — and an eclectic food source for his hogs. He quickly hammered out arrangements with old-school joints like the Dunes and the Golden Nugget.

Now Combs the younger is 74, and his farm has been trucking waste off the Strip for over 50 years. It’s a friendly, folksy operation, of a kind you don’t see much of in Sin City. He drives into town in his old pickup truck, exchanges pleasantries with the kitchen staff, then hauls away an embarrassment of pig food.

Combs isn’t an easy man to track down; he’s clearly more at ease on the farm than on the phone. But we finally caught up with him between duties, to learn the ins and outs of serving buffet food to pigs. 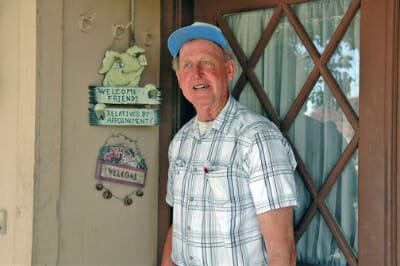 Modern Farmer: So why do you do this? Is it just about cost savings?

BC: I love what they said in the ’80s. That was before you were born probably. (Ed. Note: Nope.) In the ’80s there was a phrase I caught and took to heart and it was: “Waste is a resource out of place.” For example if somebody takes food scraps and just dumps it in somebody’s yard. That’s a resource to begin with but when they dump it in somebody’s yard it becomes a waste. You see what I’m trying to say.

MF: I do. Describe the arrangement you have with these casino hotels. Does money change hands?

BC: Well, that really depends on the contracts you work up with the waste generators. Some of them are difficult to serve — it’s not sorted out, or I have to use special equipment or something — so I have to charge them something. It’s still cheaper than their standard procedure of burying it or trying to burn it or other ways.

MF: Tell us about the pigs. Do they love human food?

BC: I’ll tell you what, I don’t want to get ethnic, but they do like Italian. Nah, don’t put that Italian thing down. I’m just pulling your leg!

MF: Ha. But seriously, do they like anything in particular?

BC: What you’ve heard about hogs is true, they do a pretty good job of balancing their diet. They’ll eat both vegetables and meat, they know what they need to be healthy. They’re tough and they’re determined. Very intelligent. Right up next to dogs in IQ. (Ed. Note: Uh-oh, Bob.)

MF: What steps do you perform before serving up the food?

BC: When we get it from the hotels we do a final sorting, so to speak, where the food scraps — and that’s what we refer to it as, food scraps. We used to call it food waste but then a very expensive PR person told us to get rid of the word waste, so we use ‘food scraps’ – so we bring in the food scraps in the truck and dump them in a hopper. Then we do a final sorting because when you have a container sitting around people will throw stuff in there. You know what I mean.

BC: One time we found a loaded pistol. Back in the day in Vegas, when people wanted to get rid of something they’d throw it in the garbage can. Our guys will pick out any bottle or can that might be in there, anything that’s not edible. Like plastics, they get picked out.

BC: Next it goes up a high-rise conveyor belt and it’s dropped into a very big cooking pot. It puts out about 10 tons from one cooking, our pot holds that much. The pot has a certain amount of agitation in the injection of the steam, so we’ve got plenty of agitation of the feed, with the steam and the heat, and then we stir it and pour it into our delivery truck. It pours out of the chute into the trough where the pigs eat out of it.

MF: Can you distinguish between different foods or is just slop?

BC: Well we don’t want to overcook — that would spoil the flavor. It’s like a stew you make at your own home, you clean out the refrigerator and put it in the pot. Sometimes you’ll have a t-bone steak, with the meat still hanging to the bone, and you can sure see the resemblance there.

MF: Hey, do you have an email address we can send this story to when it’s done?

BC: Don’t call me a male chauvinist when I tell you this, but it’s Miss Piggy Combs at REDACTED dot com. (big laugh)

Popular
Is Agroforestry the Key to Hardier Row Crops?Shea Swenson
7 Smokable Plants You Can Grow That Aren’t MarijuanaBrian Barth
Why Don’t We Eat Turkey Eggs?Dan Nosowitz
Where Has All the Mustard Gone?Chloe Faure
Goat Sex: Everything You Wanted to Know But Were Afraid to AskAndrew Amelinckx
Explore Modern Farmer
Related
Environment, Food Waste, Labor, Meat
Is There Such Thing as Good Meat?Emily Baron Cadloff
Environment, Food & Drink
Where Has All the Mustard Gone?Chloe Faure
Animals, Environment, Health
To Stop New Viruses Infecting Humans, We Must Protect Bat HabitatAlison Peel, Peggy Eby, Raina Plowright
Animals, Food & Drink, Lifestyle
The Great (Sticker Shock) ThanksgivingLindsay Campbell
wpDiscuz
We use cookies on our website to give you the most relevant experience by remembering your preferences and repeat visits. By clicking “Accept”, you consent to the use of ALL the cookies.
Cookie settings ACCEPT
Privacy & Cookies Policy