Meet the Mangalitsa, the Hairy Pig That’s the Kobe Beef of Pork

We talk to a breeder and importer about this wild and wooly breed that's become a favorite with farmers and eaters. 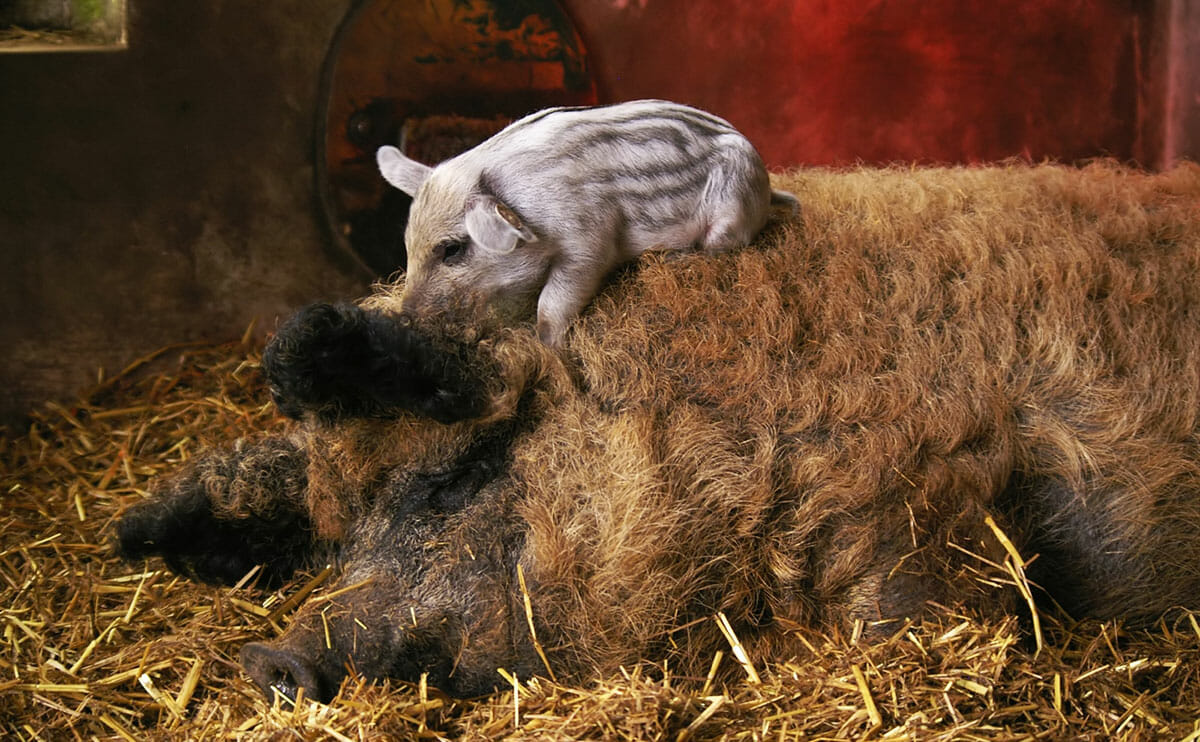 Modern Farmer: So, let’s say I’m going to get into Mangalitsa pigs. What are the selling points?

Wilhelm Kohl: Well, first of all, the flavor is unbeatable. It’s the Kobe beef of pork. If you’re familiar with pigs, you’ll know that most pigs in the last 50 years have been bred to have virtually no fat, but be mostly lean meat. One of the advertising points was ‘The other white meat.’ But it turns out when you breed the fat out of the pig, it becomes tasteless. So people are starting to look for pork that tastes better, that tastes like real meat. And you can only do that with fat and marbling, so that’s what we’re offering.

In addition, a lot of people would like to have pigs that are not raised in a factory-type environment. You know, free-range, outdoors, they have a decent life. The Mangalitsa pigs are great for that — they like to forage, dig for grubs, they don’t wait around for you to feed them. So they’re the perfect pig for what people want at this moment. 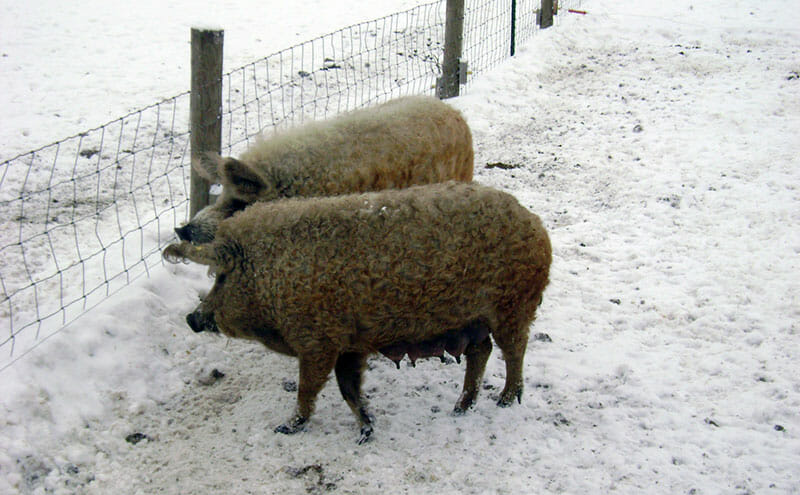 Mangalitsa pigs in the snow.

MF: Can you leave them alone, or do you still need to have feed them?

WK: Well, it depends on the area you’re in. It’s in your interest to feed them some additional material, but if you’ve got got some forested land, they’ll eat anything: black walnuts, chestnuts, horse chestnuts, acorns. We recommend that people supplement their pastured pigs with maybe barley or wheat. But not corn or soybean, because it can taint the beautiful white fat, which you don’t want. When you’re raising premium quality pigs, you want to feed them a premium quality product.

People are starting to look for pork that tastes better, that tastes like real meat. And you can only do that with fat and marbling.

MF: Obviously the striking thing about the pigs is their hair. Is that a selling point? Can people do anything with the hair?

WK: There are some experiments to use the hair, but it is quite coarse and it hasn’t been used in the past. A lot of people also like their pigs to sort of be pets. And there’s nothing cuter in the world than a little blonde or red-haired Mangalitsa. So, yes, that is a selling point — it’s the unique eye appeal of the animal. If you treat them nicely, they’ll become as tame as dogs — they’ll follow you, play with you.

Though, don’t misunderstand me, we don’t recommend that people buy them for that. 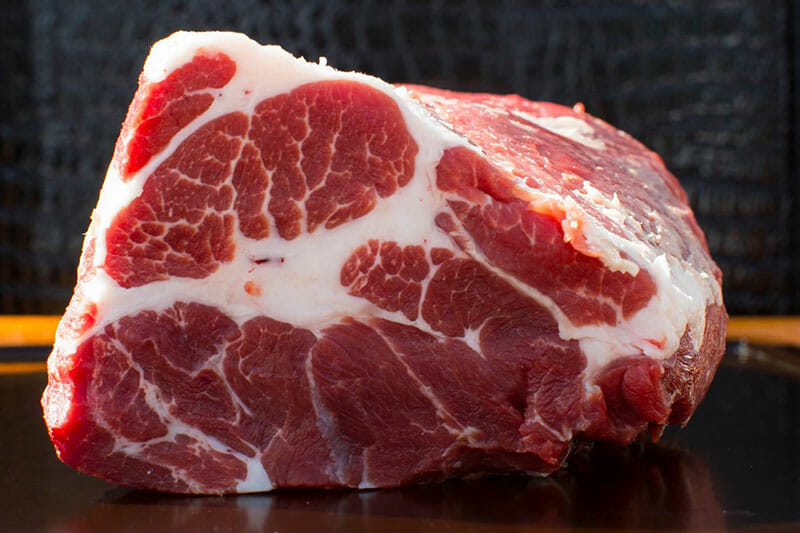 MF: These aren’t pets, but livestock.

WK: Yes, these are livestock, but some people seem to use them as pets as well.

MF: If I’m considering getting one, what do I need to raise a Mangalitsa successfully?

WK: You don’t need a hell of a lot. You need a piece of land big enough so they can forage and then put up electric fence and then maybe a little shelter for winter. Our pigs have never been inside — even this winter, which was horrific, they’ve never been inside. They don’t get any shots, they don’t get hormones, they are as natural as they come. They get all their minerals from the ground, and we rotate them through the pastures, let them tear up the ground, replant and then let them tear it up again. 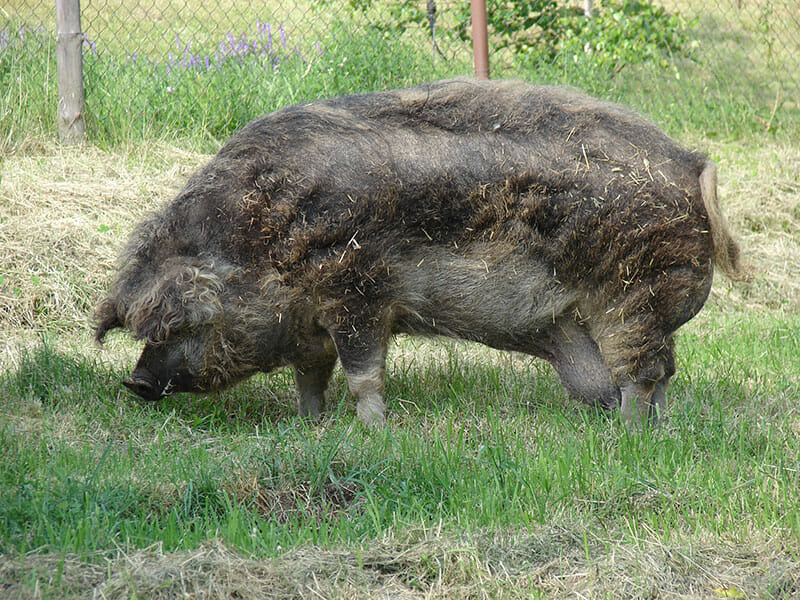 MF: What’s the smallest number of pigs I can keep? These are social animals so I can’t keep just one, right?

WK: Most people buy two gilts and a boar from us, if they want to breed. We recommend at least one and one. They are a herding type animal, so they do stick together. There’s no fixed number — you can have 10 of them, they won’t injure themselves. Even the boars leave the sows alone when they give birth. They really are very easy animals to raise.

MF: About how many piglets will a sow give birth to? 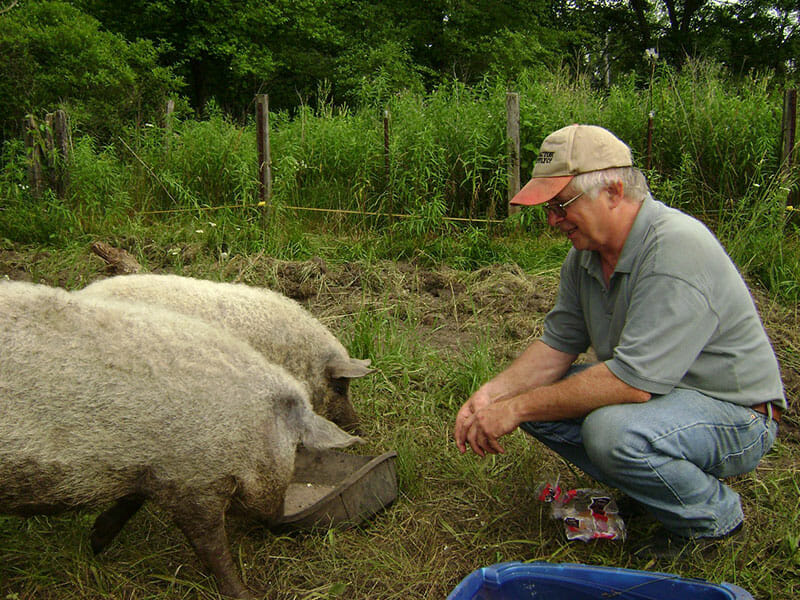 MF: When you’re raising them for slaughter, about what age do you process them?

WK: We recommend about 15 months. That’s when they hit the perfect size. They’ll weigh around 280 to 300 pounds and have the perfect combination of meat and fat. You don’t want to feed them like crazy so they turn into all fat — they should be running around and digging and you’ll have to keep their rations limited so you get the right ratio of meat and fat.

But 15 months is about double what a normal pig does. Some people crossbred their pigs, for instance with Hampshire or Berkshire pigs, to get a faster growing pig with that nice fat.

MF: But you stick to pure-bred Mangalitsa only?

WK: Yes. Our business is built around selling purebred Mangalitsa pigs. We want to be a gene bank for all of America. We want to keep on importing new bloodlines, raise them here, and then sell the boars to breeders as they need new gene material.

MF: Because Mangalitsas have all that extra hair, do you need to worry about a warmer climate? It looks like they’re wearing sweaters.

WK: No, no concern. They’re being raised everywhere from Florida to California. They do great everywhere.

(All photos, except where noted, courtesy of Wilhelm Kohl or Wikimedia Commons.)

(Editor’s Note: In an earlier version of this article, a picture of marbled Mangalitsa meat was mistakenly identified as being courtesy of Wilhelm Kohl. This picture was courtesy of MØsefund Farm / Sung Anderson. We regret the error.)

I am sorry to say but Mangalitsa or more correctly Mangulitsa is a bread from old Serbian pig Shishka that was crossed with local Hungarian breed. There are 3 types – blonde (from Hungary), black (from Serbia) and red (from Romania)!

We have a 160 acre farm in Alaska and would like to raise pigs for our market up here. Could you please send me some information on how to contact you to purchase breed stock.
Highest Regards

No mention at all of the origin of this breed? The origin of the so called “Kobe beef of pork” not being mentioned is really annoying!
It’s Hungary everybody! Best country in Europe that’s for sure

interested in hobby farming when I retire. I have been a professional for my whole career and interested in sustainable healthy farming techniques

Would like a “Fleece” or shaved hair from several adults to try in various textile projects. Please contact me if you have any.

[…] be independent and hardy, but not terrifying (so, um, no boar for me). I came across an article in Modern Farmer magazine, a feature on a family out in Vermont raising these gigantic, hairy pigs in the forest. […]

Hi
I live in Manitoba, Canada and have purchased 2 breeding pairs of Mangalitsa back in December. Right now we have 1.5 feet of snow. I have a couple of questions. What kinds of minerals, salts and vitamins do you feed your Mangalitsa pigs. What is the first sign that the sow maybe pregnant.

I am raising these pigs and I lovvvve them. I am about to get a boar and excited to see how my csa customers respond to the taste, uniquely gamey, but mildly so (I believe a characteristic of high omegas), and addictive, The fat mmmmmmmmm. I haven’t tasted anything like it, it has ruined me for regular old grocery store pork. What is not talked about is their mild disposition. I get in the pen with them (my new garden for next year that they are rototilling for me) and they are so gentle with me.

I love my pigs.

Hello, can you tell me where I might buy this pork? I can’t raise it myself, but I would like to buy the meat.