Thanks to rising sea levels and disappearing soil, agriculture's future might be all wet. 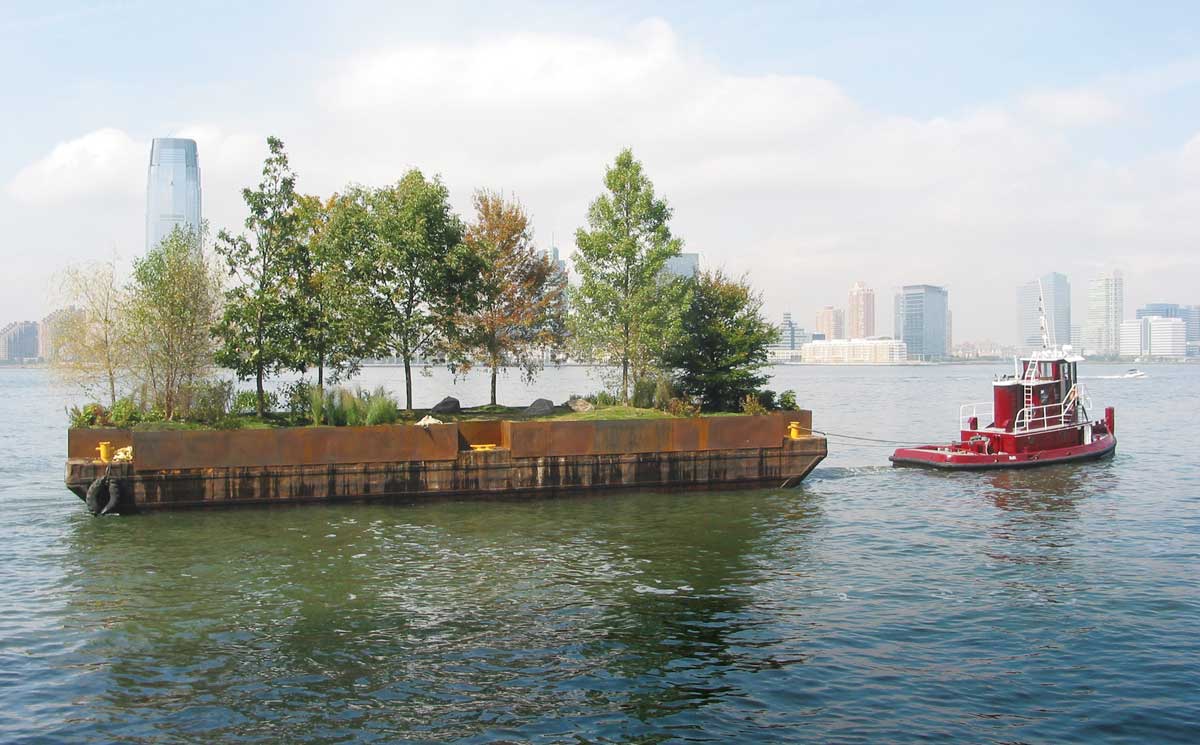 On the roof of a million-dollar Honolulu penthouse, with dazzling views of the ocean beyond the city, an unlikely group of revolutionaries is eating octopus – and plotting to disrupt our future. There’s a patent attorney, a documentary filmmaker, several academics, a fish farmer and a former agriculture commissioner (the former governor sent his regrets). Most attendees are wearing bright floral shirts; nobody wears shoes. Scotch and wine keep the mood light in the face of a weighty agenda.

For this is the annual meeting of Blue Revolution Hawaii, a group of futurists who are working out how people can live – and farm – in the deep blue sea.

“What other frontier is monumentally significant to humanity?” asks Blue Revolution founder Pat Takahashi. “I’ll tell you: Nothing.”

If you ponder humanity’s prospects for the next 50 years, things can look a little bleak. Climate change is shrinking our coastlines. Unsustainable farm practices are depleting our soil. Billions of new mouths will need to be fed. In a world of swelling populations and dwindling farmland, some predict we’re running out of places to go – and to grow food. What’s to be done?

To the members of Blue Revolution Hawaii – and like-minded thinkers around the globe – the answer is patently obvious. More than 70 percent of the Earth’s surface is water. Our future is on the ocean.

If you’ve never seen the $172 million Hollywood epic “Waterworld,” here’s a rough summary: It’s two hours of a web-footed Kevin Costner battling goons on Jet Skis. But underneath the bad acting and explosions, the film’s basic concept – mankind driven by necessity to live on the open ocean – bears an uncanny resemblance to the Blue Revolution vision.

Much like the movie ‘Waterworld,’ known for its spiraling costs, the biggest hurdle to ocean cities is the expense.

It’s a vision both bizarre and idyllic: cities built on modified oil-drilling platforms or groups of old cruise ships, tethered together. Big translucent globes are submerged near the cities, teeming with farmed fish. Thirty-foot-wide pipes extend down to 3,000 feet, pumping up water to be desalinized. Humans drink the water, and use it to irrigate plants. Electricity is sustainable and virtually infinite, powered by seawater itself.

“It’s a shame that we always seem to wait for a tipping point, for things to get truly awful, before people take action,” says Bill Spencer, an advisor to Blue Revolution Hawaii.

Though few existing projects match Blue Revolution’s scope, there is a current vogue for living and growing on water. A New York design firm has been growing plants on man-made islands near Manhattan and Philadelphia. On the western coast of Vancouver, 14 floating greenhouses and a two-story house are tethered together on repurposed fish floats. In Thailand and the waterlogged Netherlands, movements are well underway to construct floating homes, greenhouses, hospitals and prisons. The Japanese architecture firm Shimizu (also known for their plans to put solar panels on the moon) has fantastical designs for floating “lily pad cities,” complete with artificial forests and skyscraper greenhouses. Even Lockheed Martin, the aerospace conglomerate, is getting into the action – by testing offshore energy solutions in the Pacific.

Based in the Bay Area, the group is suffused with the big talk and zeal of a startup, as well as some of the funding – PayPal founder Peter Thiel has given them well over $2 million. Their dreams are grandiose and ideologically driven; John Locke and the right to individual liberty feature large. The institute believes the first ocean settlements will exist by 2020, and has partnered with an upscale Dutch design firm to facilitate that vision.

Blue Revolution Hawaii is more motivated by science than politics, and the group has yet to attract a wealthy patron. But what it lacks in capital, it makes up in know-how. Blue Revolution’s brain trust includes experts in oceanic energy, mariculture (aquaculture as practiced in the ocean) and more traditional, land-based farming. This loosely aligned cluster of men believes that the building blocks already exist for a necessary transition to the ocean.

Of all the questions raised by water-based living, the problem of power looms large: How will these communities turn on the lights? Blue Revolution’s answer centers on a 100 percent renewable energy source called ocean thermal energy conversion (OTEC, pronounced oh-tek). Simply explained, the process uses heat from the ocean’s warm surface water to vaporize a refrigerant like ammonia. This vapor spins a turbine, driving a generator to produce electricity. The electricity is used to pull up frigid water from the deep ocean, which condenses the ammonia into liquid again. It’s a closed-cycle, perpetual loop, powering itself – and creating plenty of surplus energy.

Until recently, OTEC has been stymied by a lack of capital. Though the technology has been proven sound, big investors haven’t wanted to risk the up-front costs (on the scale of $1 billion) to set up an OTEC plant in the sea. That all changed this fall.

Lockheed Martin, which partnered with a company called Makai Ocean Engineering on prior OTEC experiments, will soon enter construction on a large OTEC plant off the coast of southern China. This plant will provide 10 MW of energy to a resort community; Duke Hartman of Makai is bowled over by the implications. “We think this project will show OTEC’s value to the world,” he says.

And OTEC’s value goes beyond the energy produced. At the Natural Energy Laboratory of Hawaii Authority (NELHA) – a coastal research facility where Blue Revolution members have worked and studied – 40-inch pipes stretch far into the ocean, pulling up seawater from 2,000 feet down. This icy water is then divvied between a variety of agricultural concerns. Private companies use it to breed kampachi fish, oysters, shrimp, lobsters and abalone. Another company uses the water to produce over 2 tons of edible sea vegetables each week. Desalinized water is bottled for multiple niche “deep-water” companies. The water has even been used in more traditional agriculture, growing wine grapes and strawberries on the NELHA property.

This deep ocean water (DOW), which makes up 90 percent of the ocean’s volume, is a natural byproduct of the OTEC process. It’s loaded with a rich, beneficial cocktail of phosphates, nitrates and silicates. DOW is highly pure, almost entirely free of surface water contaminants – it’s been out of contact with the surface for centuries. An “open-loop” OTEC system would vaporize and desalinate this precious water, making it ideal for drinking and irrigation.

OTEC could be a vital linchpin in sustainable deep-sea living. Rather than having to ship in mainland food, vegetables could be grown directly in the ocean. The same agricultural diversity seen at NELHA could be handily replicated on deep-sea structures.

Advances in deep-ocean mariculture – which has been referred to as “free-range fish farming” – also bear promise for ocean colonization. Spencer recently obtained permits for his deep-ocean fish-farming operation, Hawaii Oceanic Technology, Inc. He intends to use suspended underwater pens – mesh spheres that keep farmed fish in and predators out – to grow yellow-fin tuna in a 250-acre operation. Similar technology is already being deployed by other companies, though not on Spencer’s scale; his newly patented spheres are 55 meters in diameter, capable of producing 3,000 tons of fish.

Deep-ocean mariculture is not without its critics – Monterey Bay Aquarium Seafood Watch, for one, fears that we’ve yet to assess its full environmental impact. But it has already proven to be vastly more sustainable than wild-caught fish, inland aquaculture and even conventional farming. Spencer says that to get cows to produce the same amount of meat as just one of his spheres, you’d need 16,000 acres of land, and more than a billion gallons of fresh water. “It just makes more sense to farm our protein in the open ocean,” he says.

Much like “Waterworld” (well-known for its crippling price tag), the biggest hurdle to ocean cities is the expense.

The Seasteading Institute drew up a feasibility study last year for a “semi-submersible, mini-modular platform.” It’s designed not unlike a deep-water oil-drilling operation, built to house 360 people. Estimated costs to build and tow it into the ocean would be almost a quarter of a billion dollars. The group is also exploring other, cheaper options, such as mooring a collection of old cruise ships. But even at its most affordable, Deist readily admits: “At this point the barriers to entry may be too high for most individuals.”

Blue Revolution Hawaii hopes to kick off deep-sea habitation with something called the Pacific International Ocean Station, in tropical waters at least 12 miles off Oahu. This massive, self-sustaining deep-ocean structure would be powered by OTEC, house a couple hundred people and pursue a robust slate of agriculture and research endeavors. Total cost: $1.5 billion.

It’s been suggested that Blue Revolution should start smaller, with incremental research projects that don’t require such massive up-front capital. But Takahashi thinks the only way to start the revolution is to go big. And investors are certainly showing some interest in our oceanic future. There’s Thiel, who’s aiming to launch an oceanic business incubator called Blueseed on a boat off the coast of California this fall. Walmart heiress Christy Walton has funded a venture capital fund called Cuna del Mar, which is pumping untold millions into deep-sea mariculture. And Google founder Eric Schmidt just spent $94 million to kit out an ocean research vessel called the Falkor.

“We need a billionaire investor,” Takahashi says. “How do you capture their interest? Not with some cautious research project, but with something huge, that ensures their legacy forever.”

In his less hopeful moments, Takahashi admits this outcome is far from guaranteed. Blue Revolution Hawaii started three years ago, and thus far hasn’t made much progress in bankrolling their hugely ambitious venture. And even if some wealthy patron takes the plunge, Blue Revolution’s plans remain speculative; there is no proof of concept. When asked if ocean cities are viable, Makai’s Hartman laughs. “We’re just engineers here. We’ll leave that kind of thing to the dreamers,” he says.

But despite some internal doubts, Blue Revolution’s meeting ends upbeat, with toasts to the ocean and general good cheer. Takahashi wraps things up with an emotional speech, saying this will be the legacy project of each man in the room. For theirs is an endeavor built of wonder, of pushing the bounds of mankind’s capabilities. In a hundred years, Takahashi says, people will be very thankful for the work they’ve done.

“There is no future but the ocean around us,” he says, glass raised high.