The “fluke” to which Hart refers is the reason the Hart family purchased chickens; eggs were getting very expensive. To save money, she and her husband bought chickens so the family, including JJ’s two older brothers, could enjoy eggs without worrying about the cost. But the fact that the chickens serve a therapeutic purpose for […] 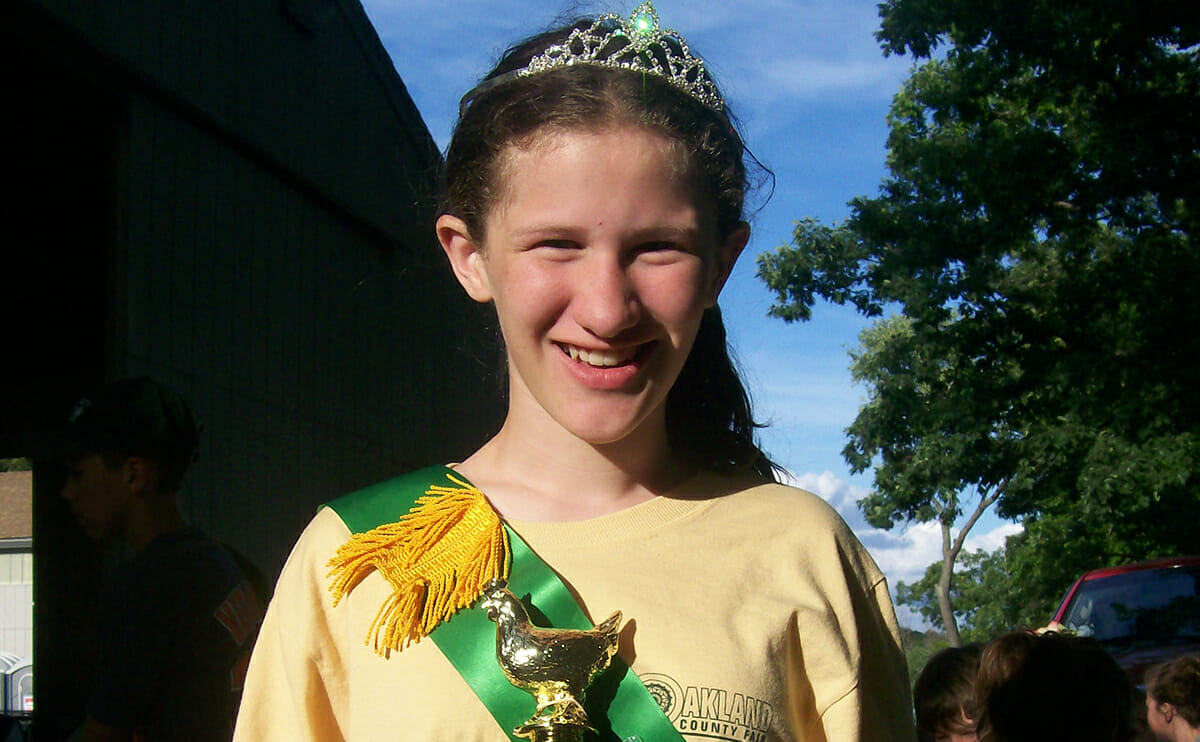 The “fluke” to which Hart refers is the reason the Hart family purchased chickens; eggs were getting very expensive. To save money, she and her husband bought chickens so the family, including JJ’s two older brothers, could enjoy eggs without worrying about the cost.

But the fact that the chickens serve a therapeutic purpose for JJ is no accident: The birds, Snow, Cinnamon and Ginger, now can sit on his shoulder and neither party is scared. (He watched them hatch and evolve into his friends.) When socialized and supervised properly, specific animals, including chickens, can offer a wide range of therapeutic benefits to children and adolescents with autism as well as conditions including anxiety, depression, and attachment issues.

A prime example of animal therapy can be found at Green Chimneys in Brewster, New York, which serves approximately 200 children with psychosocial disabilities and has a specialization in assisting children with autism spectrum disorders.

“What we try to do is work with the animal as part of a bigger treatment plan,” explains Green Chimney’s Director of of Farm & Wildlife and The Sam and Myra Ross Institute, Michael Kaufmann. “The animal itself is not a cure-all. They are part of an educational and therapeutic strategy.”

The strategy is to use animals to help the children develop important social and emotional skills, especially amongst each other.

“Over time working in our animal areas, the kids start to become better at interacting with other students and adults. It’s the social setting that has an impact. People taking care of animals together and sharing an interest in them,” says Kaufmann.

The use of such therapy does have some risks. Kaufmann cautions that “bringing children with special needs and animals together is not without risk to both. Adult supervision of the interaction is the key to making the relationship successful.”

In Animal Assisted Therapies, an individual receives therapy with an animal led by a credentialed professional. This can include medical professionals, those in psychology, social workers, family counselors, and occupational and speech therapists.

The strategy is to use animals to help the children develop important social and emotional skills, especially amongst each other.

Animal Assisted Activity [AAA] generally lacks the structured intervention of Animal Assisted Therapies and is not formally considered therapy. However, both AAA and AAE can be very therapeutic and can have a significant impact, says Kaufmann.

As far as specific animals, AAI commonly includes animals including dogs, cats, horses and some domestic farm animals such as chickens.

Increasingly, researchers are using high-tech tools to access its success.

“There is now kind of a new interest and willingness to fund research in this area and explore the specific potential in a wide range of human health care,” explains Philip Tedeschi, Clinical Professor and Executive Director of the Institute for Human-Animal Connection at the University of Denver Graduate School of Social Work, noting that in the last few years, the National Institute of Child Health and Development has put forth close to 23 longitudinal studies on human animal interaction. More information is certainly on the way including Tedeschi’s own work at the University of Denver.

In line with Kaufmann, Tedeschi stresses animals must be receiving benefits as well in this relationship. When it comes to AAI with domestic farm animals, he explains, “If they are treated with respect and the relationship is mutually beneficial then strong therapeutic connection can occur. Goats, sheep, rabbits, other fowl, cows, lamas, alpacas, pigs … all have the potential to create connection. The more domesticated and the more socialized animal finds it easier to have close human contact. ”

In such settings, powerful changes take place in the human brain. When that happens, he says, “that relationship changes your neurology causing a release of neurochemicals which can reduce stress chemicals and increase oxytocin and dopamine in the brain.”

“Those neurochemicals have been attributed for increasing capacity for safe social risks, attachment, increased trust and a more positive outlook,” says Tedeschi.

Tedeschi estimates that in the United States, there are more than 3,000 formal Animal Assisted Interaction programs.

Given this information, it’s not surprising that chickens have changed JJ. “They [chickens] actually have very social personality if treated respectfully from early on in life” explain Tedeschi.

“He was afraid of everything,” says Hart, “but the chicken caught his interest.” His nickname now is the “chicken whisperer.”

Alair Bergman, 18, is a testament to what animals, and specifically chickens, can offer to individuals with autism.

“It’s given me friends. It’s given me something to do. Something to connect with the world around me,” says Bergman when discussing the gifts the chickens have given her by phone. Bergman, who was diagnosed with autism spectrum disorder, lives on a 7.5 acre hobby farm in Clarkston, Michigan with her mother, Sharon Alair Bergman, her brother and a number of farm animals.

Her bond with chickens began at the school farm. “I had quite a talent for them,” she says. Not long after, she leased a chicken and went to the county fair where competed in a poultry competition. During such competitions, participants are judged for their chicken knowledge, ability to handle the animal and the animal’s physical condition.

The competition’s judge told Sharon that Bergman had a gift and made her promise to take Bergman to the local poultry club. The gift has certainly developed, especially after Bergman purchased her first chicken named Goldie, a Belgian Bearded Booted d’Uccle Mille Fleur. With Goldie at her side, Alair has won a number of awards including Best Feather Legged Hen and Oakland County Champion Poultry Showman. She has even competed and successfully been named Poultry Princess and Poultry Queen, both requiring a great deal of social skills to clench the titles.

Bergman documented her experiences with Goldie in her book, “My Best Friend Goldie,” co-authored with her mother. (Interestingly, Sharon, like Ashleigh, also refers to her daughter as a “chicken whisperer.”)

‘For those individuals where judgment or stigma or labels have alienated from own communities and schools, animals don’t carry that kind of judgment. The result of that is that a safer relation than with humans.’

Her connection with chickens has a lot to do with her difficulties with people. “Because of my autism,” she says “it was very hard to connect with people. The social rules and environment of people is complex. It’s a very complex social system. It’s always changing because of friends and cultural changes and such, but animals have a very predictable social stuff. It’s easier to point out personalities, know what they are wanting and feeling.”

Tedeschi provides insight that provides context for Bergman’s personal assessment. “For those individuals where judgment or stigma or labels have alienated from own communities and schools, animals don’t carry that kind of judgment. The result of that is that a safer relation than with humans,” he says.

There is on instance that really stands out for Sharon. Bergman felt strongly that since she had already competed several time in the overall county fair showman competition, she should let someone that needed experience participate in her place.

So, to all the people who ask Ashleigh Hart about chickens, the answer is yes. Yes, really chickens.

We are having our autisticgrand daughter moving in with us and were thinking of a hobby farm for special needs. We live on 11 acres in a very small rural town. So far we do nothing with the land,just give the grass to a local rancher. I would be interested in how this project has grown in the last 6 years.