It wasn't easy being a farmer in 16th-century Germany. It was even harder when you were accused of being a werewolf who had made a pact with the Devil. 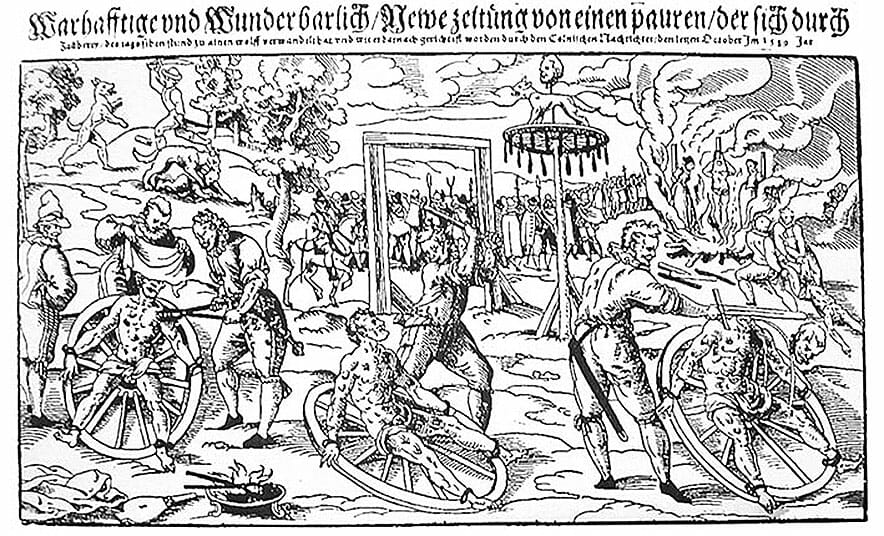 It was hard enough just to get anything to grow in a time before pest control and fertilizers. Then there was the constant threat of roving brigands who had no qualms about stealing your livestock or burning your crops. But for farmer Peter Stubbe, life was even tougher. Stubbe also had to deal with accusations of being a werewolf in cahoots with the Devil who murdered children and pregnant women.

Stubbe (or Stuppe, Stumpp, or Stumpf depending on the source) was a prosperous farmer who lived just outside Bedburg, a small city in Germany’s Rhineland, then part of the rickety Holy Roman Empire. It was a time of upheaval, with Protestants fighting Catholics and a whole lot of power struggles by various minor princes and other such royal riff-raff. The area where Stubbe lived had most recently been devastated due to the Cologne War, also known as the Sewer War (the name is apparently derived from a battle in which Catholic forces stormed a castle through its primitive sewer system).

It was at this time that townspeople began turning up dead. There were whisperings of a wolf-like creature roaming the countryside killing both humans and livestock. The creature was described as “greedy… strong and mighty, with eyes great and large, which in the night sparkled like unto brands of fire, a mouth great and wide, with most sharp and cruel teeth, a huge body and mighty paws.”

The creature was described as “greedy… strong and mighty, with eyes great and large, which in the night sparkled like unto brands of fire, a mouth great and wide, with most sharp and cruel teeth, a huge body and mighty paws.”

People were soon traveling from town to town only in large, heavily armed bands. Travelers would sometimes stumble on victims’ remains in the fields, raising the level of terror even higher. When a child would go missing, the parents would immediately assume all was lost and that the wolf had taken another victim. Although every effort was made to try and kill the creature, it eluded capture for several years until 1589 when a group of men tracking the wolf with their hounds encircled it.

When they moved in for the kill, the wolf was nowhere to be seen. They instead found Stubbe. There seems to be some confusion as to whether they actually saw him transform back from being a wolf or if he just happened to be traveling through the woods at this inopportune moment. Either way, under the threat of torture he confessed to the murders of 13 children, two pregnant women and one man. But that was just the start of it.

According to an anonymous pamphlet that circulated in London the next year that was based on an earlier Dutch version and is the primary existing source of Stubbe’s tale, he told his captors that at age 12 he made a pact with the Devil, with the Prince of Lies getting his soul in exchange for numerous worldly pleasures. But this wasn’t enough to satisfy Stubbe, who was “a wicked fiend pleased with the desire of wrong and destruction” and “inclined to blood and cruelty.” So the Devil gave him a magic belt that turned the farmer into a killing machine in the form of a wolf.

Thusly attired, Stubbe went on a spree taking “pleasure in the shedding of blood,” eating unborn children, as well as killing and eating his own son borne out of an incestuous relationship with his daughter. He allegedly took a she-demon as a mistress, along with a good Christian woman he seduced, and generally committed murder and mayhem on a grand scale. He also apparently had a penchant for livestock – one would guess that as a prosperous farmer he wasn’t killing his own animals – and especially liked lambs and kids (baby goats, in this case, as opposed to human children).

Stubbe, who loved his secret life as a werewolf, took great pleasure in walking through the streets of Bedburg, hailing the families and friends of his victims, none of them aware that the gentleman farmer was a homicidal maniac. During these sojourns he would sometimes pick out his next victim and by whatever means he could, would get them out into the fields where he would “ravish them… and cruelly murder them,” according to the pamphlet.

For Stubbe’s alleged crimes he was ordered to “have his body laid on a wheel, and with red hot burning pincers in ten several places to have the flesh pulled off from the bones, after that, his legs and arms to be broken with a wooden ax or hatchet, afterward to have his head struck from his body, then to have his carcass burned to ashes.” His unfortunate daughter, Beel Stubbe, and his mistress, Katherine Trompin, were also put to the stake as accessories to the murders.

Geography, religion and politics worked against Stubbe. He was living in an era of werewolf hysteria in both Germany and France that reached its zenith in the 1590s. In times of chaos, people have traditionally blamed things on the supernatural and usually looked for the oddest, and least well-connected, person in town to use as a scapegoat. In Stubbe’s case, it’s likely that his being a Protestant in an area that was at the time being held by Catholic forces that may have made him a target.

The Sewer War, which lasted from 1583 to 1588, began as a small-time conflict in Cologne over whether the prince-elector of the city who had just converted to Protestantism could force the conversion of his subjects. Soon Spanish troops and Italian mercenaries were brought in on the side of the Catholics, while monetary support from France and England poured in for the Protestants.

This war was a warm-up for the much bigger, and longer, 30 Years War, which as the name suggests lasted for three decades (1618 to 1648) and was both a religious and a politically motivated conflagration involving several European countries that began as a fight between Catholics and Protestants within the Holy Roman Empire and evolved (or devolved, depending on your perspective) into a power struggle between the house of Bourbon in France and the Hapsburgs of Austria.

With that in mind, it’s worth exploring whether Stubbe was actually a serial killer who believed himself to be a werewolf. For thousands of years, straight back to the epic poem of Gilgamesh, humans have believed in lycanthropy, a fancy term for the act of becoming a werewolf. In the 1500s, there was a rash of trials for people accused of being werewolves, with most of the proceedings ending in the accused being put to death. But even at that time, among the educated, the idea of lycanthropy was beginning to be understood as psychologically based. Five years before Stubbe was put to death, the writer Reginald Scot, in his book “Discoverie of Witchcraft,” argued “lycanthropia is a disease, and not a transformation.”

In Stubbe’s case, it’s possible he was suffering from clinical lycanthropy. The diagnosis (recognized in the DSM-IV) is thought to be a cultural manifestation of schizophrenia, and associated with bouts of psychosis, hallucinations, disorganized speech, and “grossly disorganized behavior.” There was a documented case from the 1970s, in which a 49-year-old woman, after having sex with her husband “suffered a 2-hour episode, during which time she growled, scratched, and gnawed at the bed,” according to Harvey Rostenstock, M.D. and Kenneth R. Vincent, Ed.D. in their article in The American Journal of Psychiatry. The woman later said the Devil came into her body and she became an animal. The article goes on to say that “there was no drug involvement or alcoholic intoxication.” This was just one of the instances in which the woman had a lycanthropic episode. The authors opined that people experience lycanthropy when their “internal fears exceed their coping mechanisms” and they externalize those fears “via projection” and can “constitute a serious threat to others.”

And it’s not just wolves that sufferers of clinical lycanthropy “transform” into. While in many cases lycanthropy is associated with wolves, there have been cases where patients believed they were sharks, leopards, elephants or eagles, among other “feared” animals.

In pre-20th-century Europe it made sense that the wolf was the “feared animal” of choice for someone suffering from lycanthropy, since wolves could wipe out a farmer’s livestock (and thus their livelihood) fairly easily and were known to kill humans, mostly children. For example, in a three-month period in Central Sweden, between December 1820 and March 1821, there were 31 wolf attacks resulting in 12 deaths. All the fatalities except one were children and it was believed a single wolf killed them.

The truth behind Stubbe’s story, like countless others who suffered similar fates, remains lost to history.”Throughout the ages, such individuals have been feared because of their tendencies to commit bestial acts and were themselves hunted and killed by the populace. Many of these people were paranoid schizophrenics,” write Rostenstock and Vincent.

Following Stubbe’s execution, the wheel on which the farmer suffered unspeakable pain was attached to a high pole and left on public display in Bedburg as a “continual monument to all ensuing ages,” an image of a wolf and a likeness of the farmer secured above.

[…] George Boren penned a study of Stubbe and his ways. Its title was “The Damnable Life and Death of Stubbe Peeter [sic].” Boren said that Satan saw Stubbe as “a fit instrument to perform mischief as a wicked […]

[…] George Boren penned a study of Stubbe and his ways. Its title was “The Damnable Life and Death of Stubbe Peeter [sic].” Boren said that Satan saw Stubbe as “a fit instrument to perform mischief as a wicked […]