Old Time Farm Crime: The Coffee Spies of the 1700s

Coffee. Java. Joe. Whatever you call it, that ubiquitous brew that jump-starts your morning was once at the center of international intrigue. 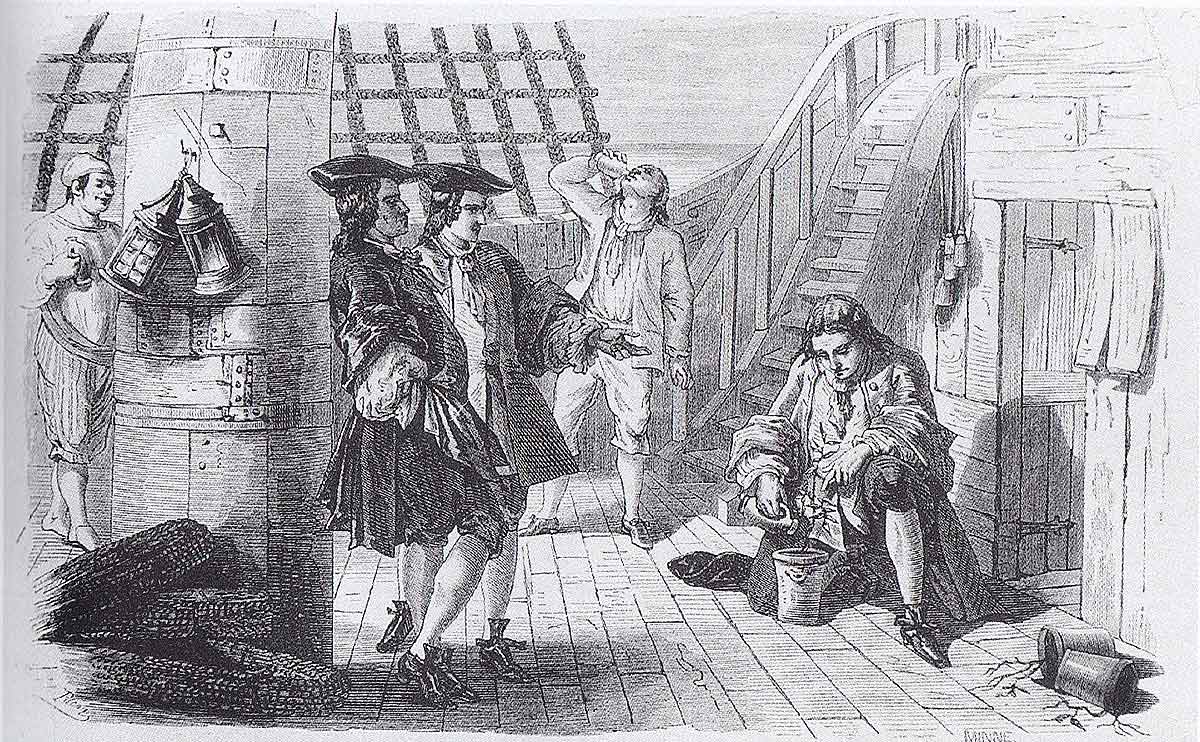 The history of coffee extends back at least 1,200 years to Abyssinia (known today as Ethiopia) where it’s believed the shrub was first cultivated. Legend holds that Kaldi, a 9th century goat herder, discovered the shrub’s power after seeing his flock become energetic when they nibbled on its berries. The story is apocryphal and doesn’t appear to have been written down until close to 700 years later. Regardless, coffee’s cultivation spread northeast from ancient Ethiopia to the Arabian Peninsula.

By the 1600s, coffee consumption was wildly popular in Europe, with coffee houses springing up in London, Paris, Amsterdam and elsewhere and becoming important cultural, political and financial centers that helped transform the continent.

And where there’s a potential for making money, and one-upping your rivals, there will surely be an attempt at cornering the market. At the time, the Arabs had coffee cultivation tied up and the Europeans wanted a piece of the action. It was up to their spies to try and get the high-powered plant into their hands and into the ground in their various colonies.

The Dutch were the first of the superpowers whose spies successfully stole a viable plant in 1616 from Mocha, the bustling port city and center of coffee trading in Yemen. Unfortunately, these spies’ names have been seemingly lost to history – easy to understand, since we are talking about secret missions here.

Luckily there are two swashbuckling undercover coffee agents that we do know of, thanks to good old fashioned self-promotion. Captain Mathieu Gabriel de Clieu of France and Lieutenant Colonel Francisco de Melo Palheta of Portugal helped their nations achieve a foothold in the fight to become coffee producers.

First up, the Frenchman Mathieu Gabriel de Clieu. In 1723, de Clieu was a naval officer serving as captain of infantry at Martinique. While on leave in Paris, he was struck by the idea that his island home would be the perfect place to cultivate coffee. The French king, Louis XIV, had recently received a coffee plant from the Burgemeester of Amsterdam, and it was ensconced in the royal garden, now known as the Jardin des Plantes, in Paris.

There are two versions of how de Clieu gained possession of a coffee plant. The first involved a daring nighttime raid on the royal garden after de Clieu failed to receive the king’s permission to take a plant back to Martinique. The more reliable, but alas less romantic, version involves the intercession of a noblewoman who apparently had something on the royal physician, Pierre Chirac, and coerced him to swipe a cutting of the coveted plant for de Clieu.

Regardless of how the captain got his very valuable plant, the journey back to Martinique was an adventure in itself. According to de Clieu, in a letter to the Année Littéraire, a literary and scientific periodical, he was forced to share his “scanty ration” of water with the “coffee plant upon which my happiest hopes were founded and which was the source of my delight.”

On top of lack of water for de Clieu’s coffee plant and the jealous interlopers ripping off branches fro the seedling, his ship was nearly captured by Tunisian pirates and was menaced by a violent storm.

He also had to fight off another passenger on the ship who, “basely jealous of the joy I was about to taste through being of service to my country, and being unable to get this coffee plant away from me, tore off a branch.”

On top of the lack of water and the jealous interloper, his ship was nearly captured by Tunisian pirates and was menaced by a violent storm. But de Clieu and his coffee plant eventually made it back to Martinique where he planted it on his estate.

Even while safely back on the island, the captain had to continue his vigilance. “I feared many times that it would be taken from me; and I was at last obliged to surround it with thorn bushes and to establish a guard about it until it arrived at maturity,” he wrote.

The captain’s instinct about the island’s climate being well suited to coffee cultivation was correct — he soon had about two pounds of coffee seed that he distributed across the island. From there the crop grew almost exponentially, replacing the island’s previous cash crop, cocoa. By 1777 there were close to 19 million coffee trees in Martinique, according to one historian.

(It should be noted that while several sources say de Clieu was the first to bring coffee cultivation to the West Indies, and there is evidence that while he may have been the first to bring it to Martinique, the plant had already been successfully cultivated in the region prior to de Clieu’s epic journey.)

De Clieu, who was born in Normandy in the late 1680s, died in Paris at age 88 after serving as governor of the Antilles. He would eventually be honored by his king (Louis IV, not the royal highness he likely pilfered the plant from) and his countrymen. Poems and songs were written that glorified his coffee growing prowess and a botanical garden in Martinique would later bear his name.

Our second spy in the house of caffeine, Francisco de Melo Palheta, is credited with bringing the coffee growing industry to Brazil. Palheta’s story is long on legend and much shorter on hard facts, but one shouldn’t expect much clarity when dealing with a 300-year-old espionage case.

It was 1727, and the Portuguese were hoping to bring coffee growing to Brazil, which at the time was still under their control. Palheta, a Lieutenant Colonel in the Brazilian Army, was commissioned by the government to steal a coffee plant from the French, since that country (and any others who had them) refused to part with them. The perfect ruse presented itself when Brazil was asked to intercede in a border dispute in nearby French Guiana. Palheta, then 57, went to the country’s capitol, Cayenne (where the pepper got its name, but that’s another story), and helped resolve a land dispute between the adjoining French and Dutch colonies. While there, Palheta set about trying to pilfer a coffee plant, but the much-prized crops were under constant supervision.

Palheta allegedly befriended (some sources say seduced) Marie-Claude de Vicq de Pontgibaud, the wife of the colonial governor. At a state dinner given on the eve of Palheta’s departure back to Brazil, his new lady friend presented him with a beautiful bouquet of flowers that contained cuttings from a coffee plant.

It is here the storylines diverge on how he achieved his goal. The most common variation involves our hero using his roguish good looks and soft touch with the ladies to complete his mission. He allegedly befriended (some sources say seduced) Marie-Claude de Vicq de Pontgibaud, the wife of the colonial governor. Palheta managed to quell the land dispute and get his valuable prize. At a state dinner given on the eve of Palheta’s departure back to Brazil, his new lady friend presented him with a beautiful bouquet of flowers that contained cuttings from a coffee plant. The other version of the story has the governor, Claude Guilloet D’Orvilliers, providing the plants as a gesture of his thanks for Palheta’s help with the border dispute.

Back home in Brazil, Palheta began cultivating coffee in the state of ParÁ¡, and in seven years had about a thousand bushes growing, according to one account. Coffee production soon spread throughout the country, giving rise to an industry that continues to dominate world coffee production today.

So the next time you stand in line at Starbucks, consider the nightime raids, cloak-and-dagger intrigue, and dark games of espionage that went into allowing you to sip a latte while listening to late-stage Bob Dylan. It’ll help pass the time until the barista calls your name.

(An earlier version of this article used the headline “Old Time Farm Crime: The Coffee Spies of the 1600s,” when in fact the two figured referenced were from the 1700s. We have amended the headline, and regret the error.)

very informative article keep it up!!