A simple technique, created by a French priest, produces record-breaking rice harvests around the world. 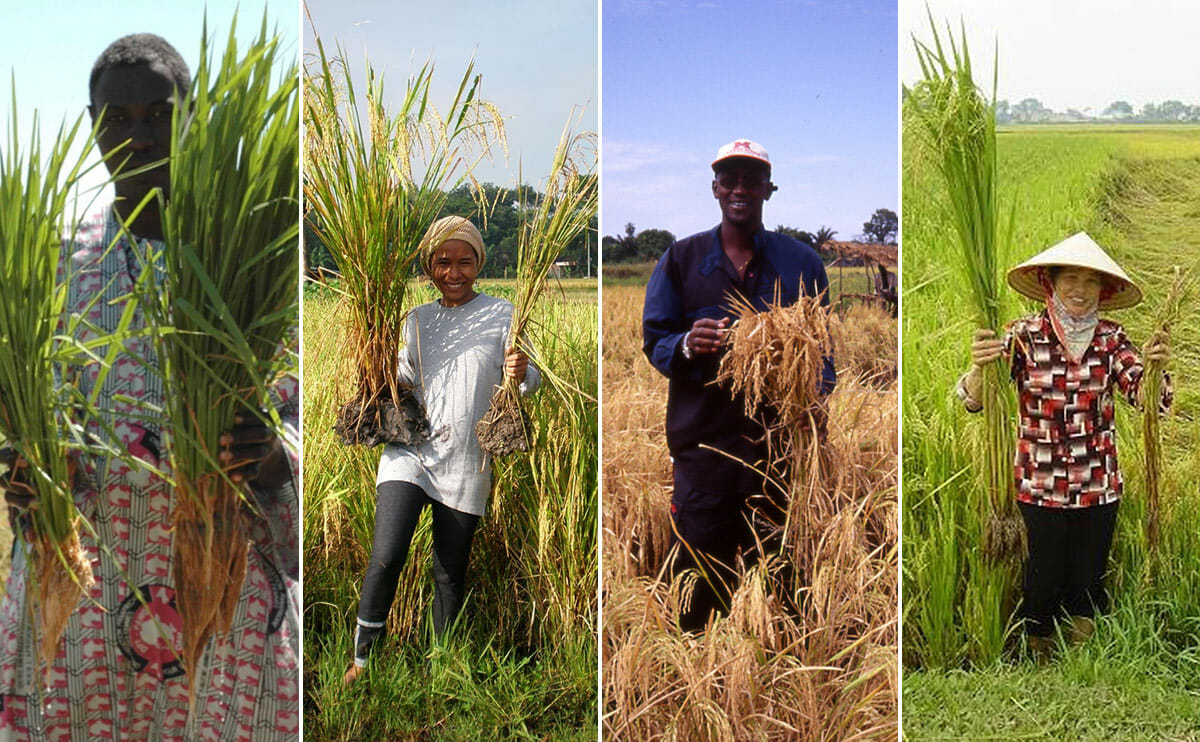 Vietnam. Two rice paddies sit touching on a green plain. The skies turn ashy, the wind picks up, and a tropical storm comes screaming up the coast. It passes. The keepers of these paddies go out to assess the damage. Blown-down and tangled, the first set of rice plants looks like newly cut hay. The second stands in sharp contrast, tall and green.

India. A cold snap hits two rice plots in the Andhra Pradesh state. For five tense days, the temperature dips below 10 degrees Celsius. One set of rice plants submits to the cold. It is completely wiped out. The other, when harvested, yields a full crop.

The unlucky rice paddies in these vignettes were managed with traditional methods. Farmers packed many rice plants together in single hills and flooded the fields with water. Fortunately, the second set of plants was raised according to the rules of a newer methodology, called the System of Rice Intensification (SRI). SRI produces stronger, higher-yielding plants that can stand up to storms, drought, diseases, and pests better than rice plants grown the conventional way.

SRI involves simple changes to traditional methods. (That said, even small alterations to tradition can be hard to make.) The methodology has six main elements. First: transplant seedlings of rice when they are still very young. Second: transplant just one seedling per hill, and (third) be sure to space the seedlings widely. Fourth, fifth, and sixth: comb the rice paddy often with a mechanical weeder, add compost to the soil, and don’t keep the field flooded with water. That’s pretty much it.

“The System of Rice Intensification,” explains Cornell professor Norman Uphoff, “was developed by a remarkable French Jesuit priest who spent 34 years of his life working and learning in Madagascar with farmers.”

That priest’s name was Henri de Laulanié. He wanted to combat poverty, but farmers in Madagascar lacked the money to upgrade farm equipment or purchase expensive inputs. Instead, he observed farmers and tinkered with what they had – rice, water, air, sunlight. After many trials and some luck, Laulanié had SRI methods in place by the 1983 to 1984 growing season.

Today, the benefits of SRI practices have been seen in 52 countries: Rwanda, Burundi, Bhutan, Nepal, Cuba, both Koreas, Iran, Iraq, Nigeria, Haiti and more – and more every year. SRI has especially strong footing in the four countries – China, India, Indonesia, and Vietnam – that grow more than two-thirds of the world’s rice.

“It’s Agronomy 101,” says Uphoff. For instance, when planting tomato plants, you space them at wide intervals so they don’t crowd each other. This space lets leaves catch sunlight, allows roots to blossom underground, and gives the plant a steady stream of fresh air. That means more sunlight, water, and CO2 – the three inputs a plant needs for photosynthesis. In other words, wide spacing leads to more food for the plant.

What you have here is a healthier, happier plant grown strong on plentiful food.

What you have here are benefits to farmers that include higher yields, less money spent on inputs (when using compost and not needing agrochemical protection), a hale plant better able to weather storms and stresses, less water usage, less fighting with neighbors over water (in dry regions), and less work once farmers are used to the new method (in total, there are 80-90% fewer plants.)

What you have here is a rice farmer in the Bihar state of India. Using SRI methods, he pulled in the world-record harvest of 22.4 tons per hectare.

What you have here is a method that shortens the crop cycle by 5 to 15 days. That may seem trivial, but it’s important for farmers. For 5 to 15 days, rice plants are less exposed to disease and pests. For 5 to 15 days, they don’t need water. And now, before the cold settles in, the farmer has a fresh space to plant a quick vegetable crop.

United States. Two rice paddies sit in New York’s Hudson Valley. They’re two of the first SRI crops to have cropped up at home. Erika Styger, director of programs for the SRI-Rice secretariat at Cornell, has seen another earlier this summer in New Jersey. Perhaps there are others. SRI rice – coming soon to a farmers market near you?

Images at top, from left to right:

Miyatty Jannah, SRI farmer and volunteer training, in Ngawi district of East Java, Indonesia, holding up an SRI rice plant and one conventionally grown. Ms. Miyatti has travelled to the Solomon Islands to do SRI training there, under the auspices of the Nusantara Organic SRI Centre (NOSC) in Nagrak, West Java. (Picture by Shuichi Sato)

Dr. Mustapha Ceesay, former director of the Sapu agricultural research station in The Gambia, holding up SRI rice plants being harvested from a test plot that he managed for his thesis research for a PhD in crop and soil sciences from Cornell University. (Picture courtesy of Mustapha Ceesay)

Vietnamese farmer in Dong Tru village north of Hanoi holding up SRI rice plant and conventionally-grown plant of same variety in front of the fields in which they were grown. The day before this picture, the field were hit by a tropical storm, and the conventionally-grown rice was badly lodged from the wind and rain. The SRI plot was hardly affected. (Picture by Elske Fliert)