A Model for Reconciliation Over Raw Milk?

A Michigan workgroup report with an unsexy title may hold the answer to resolving the thorny question of how consumers can legally obtain raw milk. 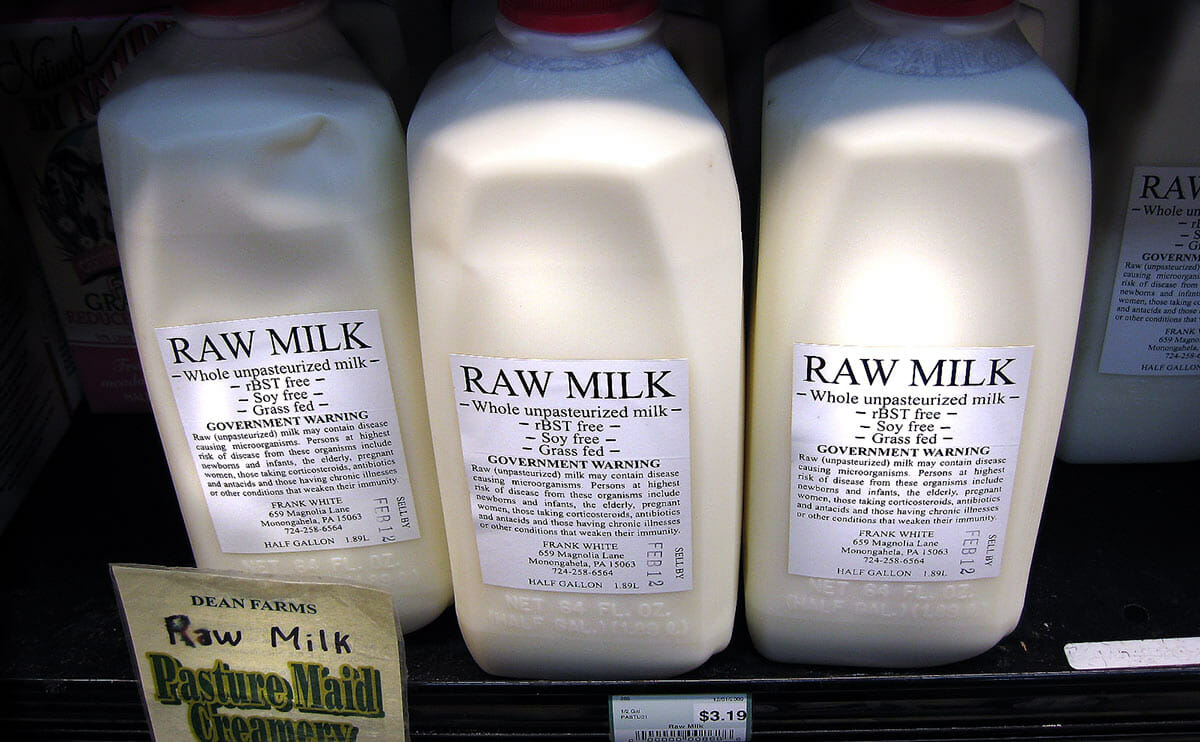 Unpasteurized or “raw” milk (milk that hasn’t gone through a process of heating that kills pathogens) is becoming more popular with people who believe the milk is healthier and tastes better. It’s also been on shaky legal ground in many states, with restrictions on retail sales or sales at farmers markets or even on private “herdshare” arrangements. And despite recent high-profile legal cases throwing a spotlight on the tug-of-war over the dairy specialty, legislative battles over raw milk’s status continue in a number of states. (Recent news stories about raw milk sickening dozens have also intensified the debate.)

The public health and agriculture regulatory communities have fought tooth and nail over the past half-dozen years against most efforts to loosen restrictions on unpasteurized milk availability for the growing numbers clamoring for it.

During this time, raids and searches by both state and federal officials, aimed at countering ostensibly illegal raw-milk sales, have been carried out at farms in Pennsylvania, Wisconsin, Minnesota and California. Laws designed to relax rules affecting raw-milk sales and distribution have been vetoed by governors in Maine, Wisconsin, Nevada and California. Contentious regulatory and legislative hearings about raw milk have been held in Georgia, Connecticut, Massachusetts and Illinois.

But in Michigan, the first state to ban raw-milk sales back in the late 1940s and perhaps the most unlikely place to deregulate it, a much different scenario has unfolded. A group of 13 individuals – made up of farmers, academicians, healthcare professionals and regulatory officials – have been quietly working together over a six-year period to find common ground with lawmakers.

And they may have found it in the form of a 90-page report – issued without fanfare last December, and endorsed also without publicity in March by the Michigan Department of Agriculture & Rural Development. The report has an unsexy title – “Report of Michigan Fresh Unprocessed Whole Milk Workgroup” – and so low-key was its issuance that it only came out in paper form, though it is available for download here.

But what’s notable is that some of the report’s conclusions and recommendations are at odds with conventional public health and agriculture wisdom. Key are the following:

”¢ Apparently for the first time anywhere, the Michigan workgroup encourages raw-milk consumption as part of state economic development, noting that boosting both raw- and pasteurized-milk consumption “enhances the mutual goal of having more people include milk in their diet.”

”¢ While the U.S. Food and Drug Administration often warns that raw milk is inherently dangerous (“like playing Russian roulette with your health,” as the FDA puts it), the workgroup’s report states categorically: “Milk is not inherently hazardous.” It adds that “many other foods … can readily support the growth of disease-producing bacteria: fresh and processed meat, sea food and foods consumed fresh such as produce, coconut milk and fruit juices.”

”¢ The report takes a novel approach with regard to raw-milk safety, indicating it’s not just the responsibility of farmers. It argues that reducing risk must be assumed by all concerned; it “is the responsibility of all those that handle FUW milk, including farmers, handlers and consumers.”

”¢ The report departs from the FDA’s usual reasoning, suggesting that raw milk is more nutritious than pasteurized milk. “Milk fresh from the cow is a complete, living, functional food,” with enzymes, “cellular elements,” prebiotics, special proteins and trace minerals beneficial to people. “Proteins are incrementally denatured by heat” of pasteurization, the report notes. But fat, “of all the milk constituents … is the most drastically altered by the combination of pasteurization and homogenization.”

”¢ Also contrary to usual FDA reasoning, the workgroup suggests that raw milk can counter a number of chronic diseases and health conditions, including asthma, allergies and lactose intolerance. “Many people with professionally diagnosed lactose intolerance do not have the symptoms of this condition, even when consuming large amounts of fresh milk.” It even can be “beneficial in some autistic children,” and “to treat a variety of intestinal disorders,” the report says.

The effect of the workgroup report has been to gain firm state endorsement of a policy change that emerged out of a bitter conflict in 2006 and 2007, when Michigan’s Department of Agriculture initiated the nation’s first significant skirmish over raw milk. In October of that year, agriculture agents confiscated thousands of dollars’ worth of raw milk from farmer Richard Hebron, as he was delivering it to a cooperative in Ann Arbor. The state maintained that its late-1940s law requiring all milk to be pasteurized prohibited any and all distribution of raw milk. The cooperative argued it was obtaining the milk privately, outside the publicly regulated food system.

Over the next six months, a local prosecutor investigated the case, eventually deciding not to prosecute Hebron on criminal charges, as recommended by the state agriculture regulators. The case was settled with Hebron paying a small fine, and the state’s attorney general sanctioning, at least temporarily, herd-share arrangements, whereby consumers sign agreements that give them a partial interest in a herd of cows, as a means for people to obtain raw milk.

Hoping to avoid another incident like the Hebron case, proponents and opponents of raw milk formed the workgroup to see if they couldn’t develop a compromise. No one thought the process would drag on for six years, though. During that time, a vibrant raw-milk industry emerged, and dozens of small dairies have organized herd shares for small groups of local consumers.

In an introduction to the report, the workgroup described the lengthy process: “Since 2007 … workgroup members have celebrated milestone birthdays, wedding anniversaries, graduations and births of children and grandchildren. The workgroup members have especially enjoyed the opportunity to get to know each other and understand differing perspectives on the subject of consumer access to fresh unprocessed whole milk.”

One representative of the Michigan Department of Agriculture & Rural Development in the workgroup, Susan Esser, deputy director of the Food and Dairy Division, said the agency “has a long tradition of working with stakeholders to find consensus around complicated issues.”

In a policy statement issued in March, the agency affirmed herd-share operations, allowing one legal way for consumers to get raw milk. In the process, they’ve further distanced itself from FDA policy, which is to reject herd shares and other private arrangements for obtaining raw milk as sham arrangements – noting that they didn’t violate Michigan’s long-standing ban on sales of raw milk. “In a herd-share operation, consumers pay a farmer a fee for boarding their animal (or a share of an animal), caring for the animal and milking the animal,” the policy statement said. “The herd-share shareholder then obtains (but does not purchase) the raw milk from his or her own animal.”

Can the Michigan model for accommodation over raw milk work in other states? No one knows for sure. But in the many states where deep divisions exist, it may be worth evaluating what the Michigan workgroup was able to accomplish by committing itself single-mindedly to resolving one of the thorniest agriculture and public health issues out there.

(Correction: An earlier version of this article contained misstated that raw milk is “largely illegal to consume and sell in the U.S.” It is illegal to sell in only 20 states, but legal in 30 others. It isn’t illegal to “consume” anywhere — if you have your own cow, you can consume it in every state. We regret the error.)

(David E. Gumpert writes about food and health, and is the author of Life, Liberty, and the Pursuit of Food Rights: The Escalating Battle Over Who Decides What We Eat.)