Voting One Way, Eating Another

When Liz Coffey, 31, shops for herself and her husband, the Oakland, CA resident typically buys the cheapest eggs. That is, the ones from chickens raised on conventional farms. There are cage-free options available, and when asked, Coffey says she imagines those chickens live better. “I’m never under the pretense that my money is going […] 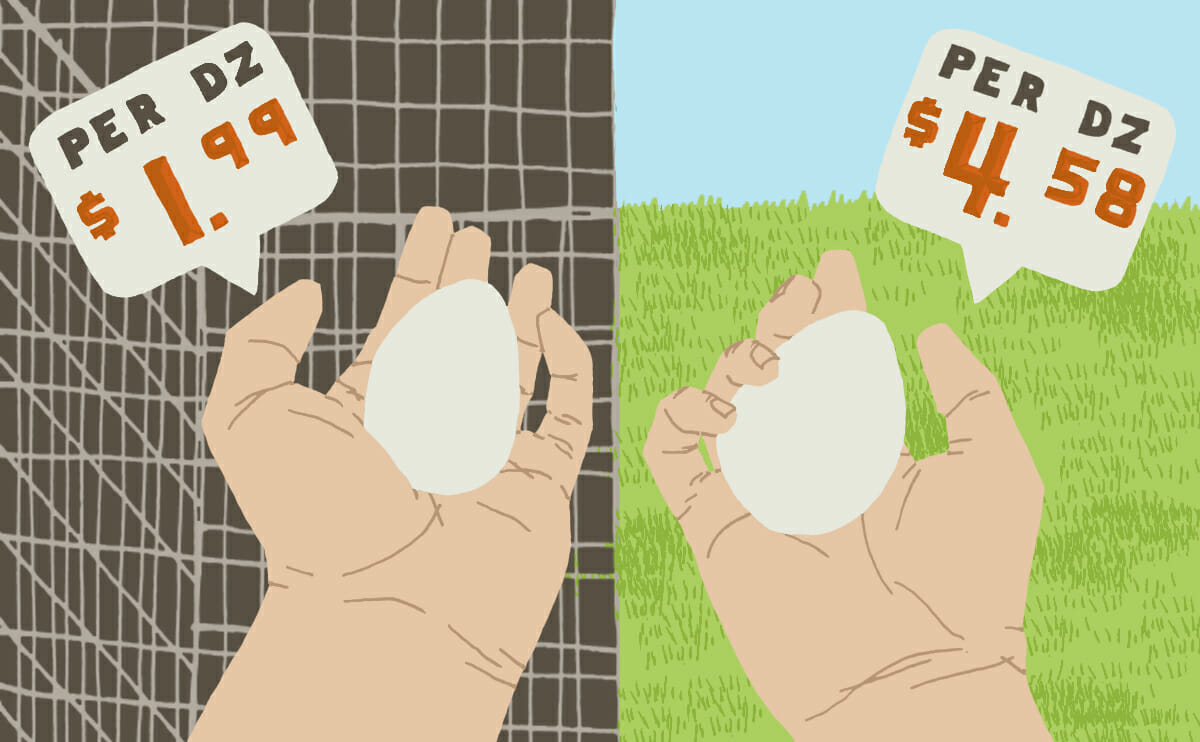 When Liz Coffey, 31, shops for herself and her husband, the Oakland, CA resident typically buys the cheapest eggs. That is, the ones from chickens raised on conventional farms. There are cage-free options available, and when asked, Coffey says she imagines those chickens live better.

“I’m never under the pretense that my money is going to an animal that’s not probably living some crappy life,” says Coffey. “But I just don’t think about it. I don’t make the connection.”

And yet, Coffey cares about farm animal welfare. She was one of the majority of Californians who, in 2008, voted for Proposition 2, the ballot initiative that says farmers must increase cage sizes for chickens, veal calves and pigs by 2015. Somehow, though, Coffey’s voting behavior doesn’t carry over to her shopping trips, where she’s loath to shell out a few extra bucks for a more humanely raised product.

And she’s not alone.

Research has shown that a majority of people, when asked, would like to improve the lives of farm animals. Yet only a fraction of the country will pay for products from those animals, when presented with cheaper options.

For animal rights activists, getting people to care enough to pay more for things like cage free eggs and grass fed beef has long been a challenge. But when animal welfare reform becomes law, that’s when things get really problematic. Voters have increasingly been passing laws allowing for more space for chickens, pigs, and veal calves across the country. Clearly, movies like Food Inc. are making an impact. But when people vote one way, then vote a different way with their fork, they unintentionally undermine the very agricultural changes they’re rooting for.

California: Where the Rubber Meets the Road

The California egg industry makes an interesting case study of how the politics and economics of animal welfare can clash. Prop 2 requires chicken farmers to build cages that allow chickens to spread their wings freely. (In a conventional cage, which measures a little more than 8 inches by 8 inches per bird, they cannot.)

Yet Prop. 2 only requires California egg producers build bigger cages, and the state gets a third of its eggs from out of state. If you were, say, an egg producer just over state lines in Nevada, you could still sell your conventional eggs at, most likely, lower prices.

So what’s the big deal, you might ask? 63 percent of the state’s voters approved Prop. 2, so doesn’t that suggest there is a healthy market for those more humanely raised eggs that might be a little more expensive? No.

There are many kinds of eggs available now in California, from organic to pasture raised, to cage-free. But they’re not exactly flying off the shelves. According to the United Egg Producers, 85 percent of all eggs purchased in California are conventional eggs. (The national average is 90 percent.)

Because of the dichotomy between what voters say they want, versus the reality of how they shop, the California egg industry faces ruin.

Because of the dichotomy between what voters say they want, versus the reality of how they shop, the California egg industry faces ruin. The situation was recognized as being so serious, in fact, that state legislators passed another law, AB1437, requiring that all eggs sold in California must comply with bigger cage standards. That would ostensibly take care of the “cheap eggs from Nevada” problem. But it remains to be seen whether this will truly protect California’s egg industry from the reality of bargain hunting shoppers. An amendment being proposed in the federal farm bill would make AB1437 illegal, along with other states that attempt to impose standards on out of state agricultural imports.

JS West is a big family-run, fourth generation California egg farm, with 1.8 million hens, that until recently were all kept in traditional battery cages. Prop. 2 is vaguely written, another complaint of the egg industry, because it sets no clear guidelines on exactly how big to build one’s chicken housing. But after it passed, Senior Vice President Jill Benson and the other JS West executives, took a stab at what they thought might comply. They built two new barns in the style of those found in Europe, where the chickens have almost twice as much space, as well as perching, nesting, and scratching areas.

The construction cost $7.2 million, and the eggs, sold under the name “Comfort Coop,” are sometimes marked up by grocery stores as high as a dollar over conventional eggs. When that’s the case, Benson says, “The sales are drastically reduced.” So much for giving voters what they want.

“We’ve done a lot of outreach, trying to educate people about what they are,” says Benson. That includes taking a replica of the coops with fake chickens inside, to schools and to the state Capitol, and having a live chicken cam on the company’s websites, showing the new barns in action. But at the end of the day, Benson says, price is more powerful.

Egg farmers or for that matter pig or veal farmers, in other states that have passed animal welfare reform laws, may not all be in such a tough spot as California’s farmers. Other states’ egg reform laws, for instance, address the threat of out of state competition the way Prop. 2 failed to do. (To date, five other states have passed laws mandating larger cages.) But if the aforementioned amendment to the federal the farm bill goes through, then those protections will be illegal too, and those states’ farmers will be in the same vulnerable position as California’s.

Some involved in the egg industry have theorized that perhaps the people who vote are not a good representation of your average shopper. Maybe they skew more sympathetic to animal rights issues. But some research shows otherwise.

Jayson Lusk and F. Bailey Norwood, agricultural economists at Oklahoma State University, have been studying the economics of animal welfare for the past decade. They have done experiments where people recruited from different parts of the country were given a crash course in modern farming practices, then were asked, confidentially, by a software program, how much money they’d pay for meat and eggs from happier animals. To make it more realistic, they had to use real money given to them by the researchers for participating in the experiment to pay for those products.

“It is a real part of them, just like it’s real when you say you want to lose weight,” hypothesizes Norwood. “But then when you actually have to go to the gym or eat the smaller meals, you’re less likely to do it. We always fall short of our ideal self.”

Also, he says, humans are social animals, and in different settings, people act differently. At the store you’re thinking about getting what you need, saving money, acting as an individual. “In the voting booth, you’ve got your ethical hat on, thinking as a citizen,” says Norwood.

That is not to say that nobody wears the same hat all the time. At Safeway, a large chain of grocery stores on the west coast, organic and cage-free eggs sales are growing at a more rapid rate than regular eggs. And at farmers markets, CSAs, and stores like Whole Foods, there are plenty of shoppers willing to pay to ensure their food came from well-treated animals.

“We hear about it in emails, on blogs, the questions that we get ”“ they’re intense,” says Becky Faudree, a global meat buyer for Whole Foods. “They want to know more than ever, and they ask the hard questions: what was that animal’s life like?”

Still, these types of shoppers are the vast minority, whereas desire to help animals appears to be a growing majority.

Egg farmers don’t get to set the price of their eggs at the grocery store; the retailers do, based on a variety of factors. Recently, a California grocery chain put JS West’s Comfort Coop eggs on sale for only a penny more than its regular eggs. JS West is comfortable with this price, and Benson was happy to report that they’re selling very well.