How to Farm Insects at Home

Bugs. You want to eat them. But where to get them safely? 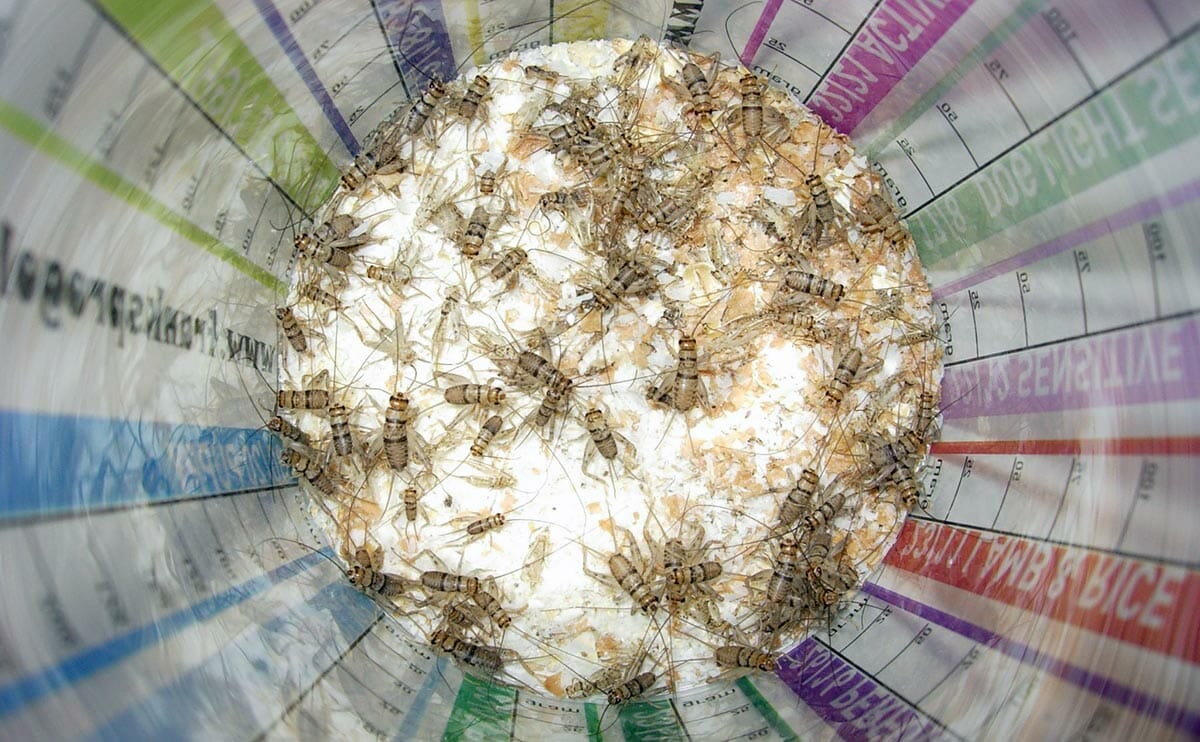 Hotlix is known primarily for its lollipops and other candy containing scorpions, crickets, or worms – the type of novelty treats you’d find in a gift shop on a pier. Though the products might seem a bit silly, the company is quite serious about its insects. “We process them here, to make sure nothing like bacteria gets on them,” says Hotlix owner Larry Peterman. He also manages the farming of the live animals. “We make sure ours are raised well. In other words, they haven’t had anything bad to eat.”

Though Peterman has always used this careful methodology with his food products, it’s only in the past month or so that restaurants and other food companies around the world have been coming to Peterman for advice and orders: the tiny Grover Beach, California company’s latest shipment of non-candied insects was sent to England.

This increase in interest is tied directly to the Food and Agriculture Organization of the United Nations’ 2013 report focusing on edible insects. The report’s main argument? Our consumption of livestock protein is killing the planet. Humans probably won’t stop eating animals, though, so why not make insects a regular part of the Western diet?

Hotlix owner Peterman sells insects to other purveyors around the world, but he’s not able to ship in quantities small enough for the home cook. That raises the question: if you want to eat insects at home, where to start?

One could potentially become a bug hunter and head to a park to try and collect wild insects to cook. But that’s not an ideal solution. “Foraging them from the wild could prove problematic on a number of levels,” says Daniella Martin, who runs Girl Meets Bug.

Conservation biologist Phil Torres notes the issues of “unnecessarily taking animals from the wild,” and Marc Dennis, the founder of Insects Are Food, says that “you do not want to take bugs from the wild, because you don’t know what sort of pesticides or other chemical sources they’ve come into contact with.”

So as it turns out, foraging your own insects is potentially unhealthy for the planet and your body. But if not from the sidewalk, where does one obtain this tiny livestock? Many companies that started as purveyors of food for pet reptiles are now supplying human consumers, as well.

“I’d buy a starter batch of mealworms from a pet store,” says David George Gordon, author of the Eat-A-Bug Cookbook.

It certainly sounds unorthodox, but Hotlix owner Peterman agrees, saying they’re fit for human consumption. His tip: keep them alive for a day before cooking and eating them. “If they’ve had pesticides, or they’re sick, they’ll die quickly. If they’re still alive after 24 hours, they’re safe to eat.”

Still the idea of eating something from the pet store might be understandably off-putting to some. There’s another solution: farm your own insects.

“I would definitely recommend buying your first batch of ‘breeders’ from a reputable insect farm,” says Martin. Good sources include Rainbow Mealworms, San Diego Wax Worms, and Fluker Farms, whose crickets were highly recommended by multiple sources. Mealworms (beetle larvae), wax worms and crickets all thrive in captivity ”“ according to Torres, locusts can be added to the list as well.

The habitats of these animals can be quite simple: a plastic bin, ventilated and in a warm area, plus some oats, is all most bugs need to thrive. “Insect rearing can be very simple and low-tech. Also, unlike grazing mammals, they don’t need large horizontal areas to live in, and they can be stacked in a vertical environment for maximum efficiency of limited space,” notes Torres. “Many insects certainly do adapt well to farm-like environments. Numerous species can be raised in high densities, especially compared to mammals, so you can get a much higher nutritional output per unit area used to raise them.”

“One female cricket lays about 100 eggs in her 4-month lifespan. Roughly half of these eggs will hatch female crickets, so you will have 50 more layers, each laying 100 eggs, or 5000 more crickets within the next few months,” says Martin. “So, a minimal initial investment in a cricket colony could absolutely feed a family of four. ”

Andrew Brentano, co-founder of Tiny Farms, a company dedicated to increasing entomophagy in the western world, raises insects in the bins pictured above. “Our silkworms were raised in an environmentally controlled tent and fed a prepared feed made with powdered mulberry leaves. The mealworms can be raised at room temperature (ideally close to 70 degrees F) in shallow plastic or metal trays in a bedding of wheat bran or other grain byproduct, and should be fed additional vegetables like carrots for moisture. The beetles are adult mealworms in a breeding bin, containing about 150 beetles who may lay over 100,000 eggs.” (Tiny Farms is also launching a line of bug-raising kits for home farmers later this summer.)

If you’re ready to take the plunge, these are the easiest animals on the planet to farm. Insects are generally full of good fats and protein, and the only thing better than eating healthy is saving the world while you’re doing it.

Bugs are tasty and definitely something we should have never stopped eating! great article

Only thinig is where to sell these meal worms is there a market If I wanted to make a business out of it or just for self use?
Judy

I would not mind eating insects, but I will want them to be prepared correctly. Eating ones from the wild, you have no idea what kinda trash they got into and that kinda thing especially in certain areas on the planet. There are also a couple kind that I wouldn’t eat if I didn’t have to only because I naturally find them to be kind of gross, like hornets. But other than those reason yeah, I’d love to try a cricket or even a fly. I hear in Africa fly burgers are common place. I will be up for that!