A Garden Grows in Cabrini-Green

When Ned Lewis started hanging out at the Chicago Lights Urban Farm at nine years old, he found the labor to be beneath him. “I thought it was slave work” Lewis says. A friend had dragged him to the farm and implored him to help out with watering, weeding, and interacting with the younger kids […] 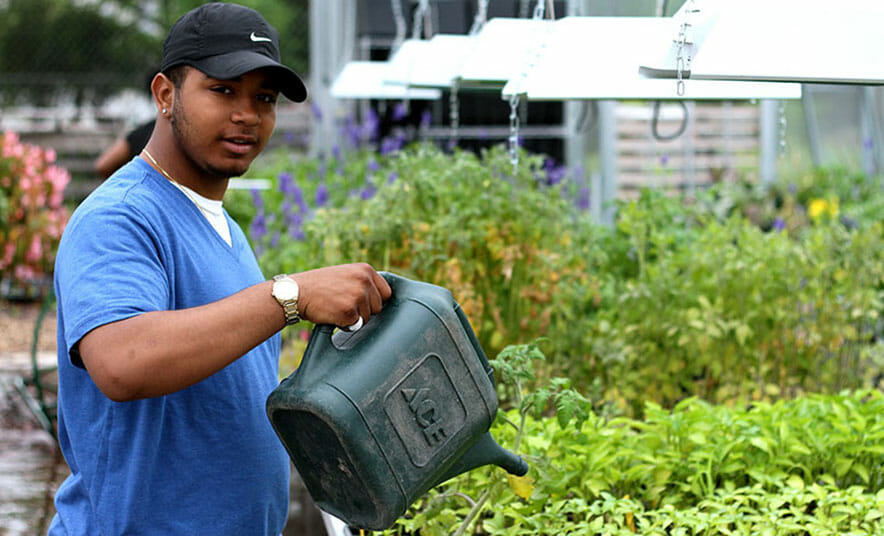 When Ned Lewis started hanging out at the Chicago Lights Urban Farm at nine years old, he found the labor to be beneath him. “I thought it was slave work” Lewis says.

A friend had dragged him to the farm and implored him to help out with watering, weeding, and interacting with the younger kids in order to keep them off the street. Now 19, Lewis says he has “gotten used to” the work and has a different perspective on the garden. “I like coming here,” he says, “because it’s my community.” 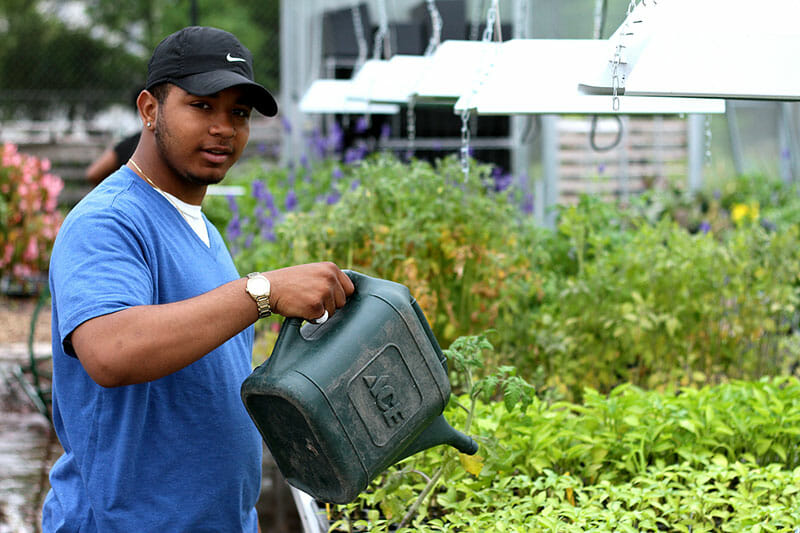 That attitude is what has kept Chicago Lights on its feet for the last 10 years, allowing it to bloom into what looks like a successful urban agriculture fairy tale. But there’s a twist: despite being surrounded by high rises and bustling CTA trains, the Chicago Lights farm is located at the heart of Cabrini-Green, a gang-ravaged neighborhood that was once the home of Chicago’s most notorious public housing projects. Though the most poverty-ridden towers have been torn down and the city has worked to turn Cabrini into more of a “mixed income” community, garden director Natasha Holbert says the neighborhood has struggled to adapt.

“The tearing down of the towers changed the dynamics a bit. The community has no identity at this point and they’re struggling to find something in common,” Holbert says. Indeed, the primarily African-American residents don’t typically converse much with the newer, wealthier, and, frankly, whiter members who have moved to the neighborhood in recent years. That’s not the case at Chicago Lights, however, which Holbert says has provided a unique space where there’s “lots of interaction among all kinds of people.” In essence, the farm has helped pull the constantly changing community together. 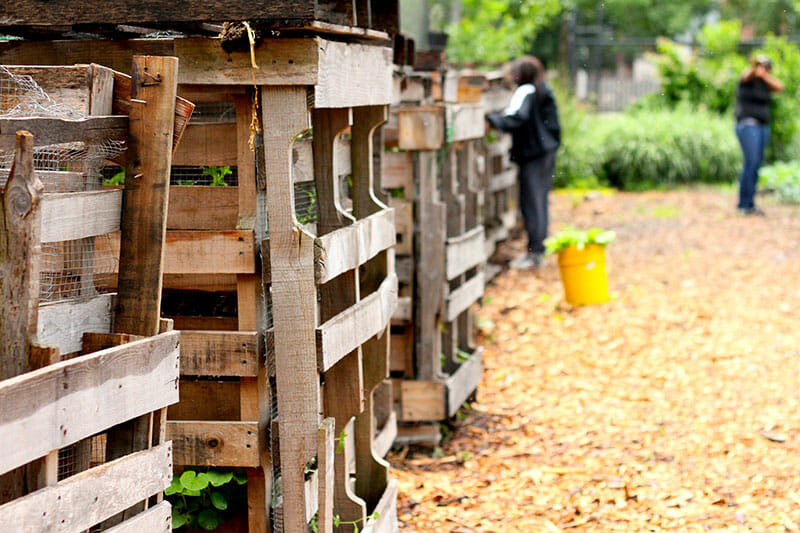 Chicago Lights is able to run an entire urban farm on top of a concrete pad thanks to compost. Lots and lots of compost.

Chicago Lights was started in 2003 and built entirely atop an empty concrete lot – not that you’d know it from walking between the plots. Holbert says the entire 32,000-square-foot site was built from scratch by trucking in soil and creating their own compost, which they use to continue building the farm’s base every year.

Today, there’s somewhere between 10 to 18 inches of soil on top of the concrete, which is plenty good for most of the food grown there. “We have some trouble growing those giant beefsteak tomatoes, but otherwise we can and do grow pretty much anything,” Holbert said. 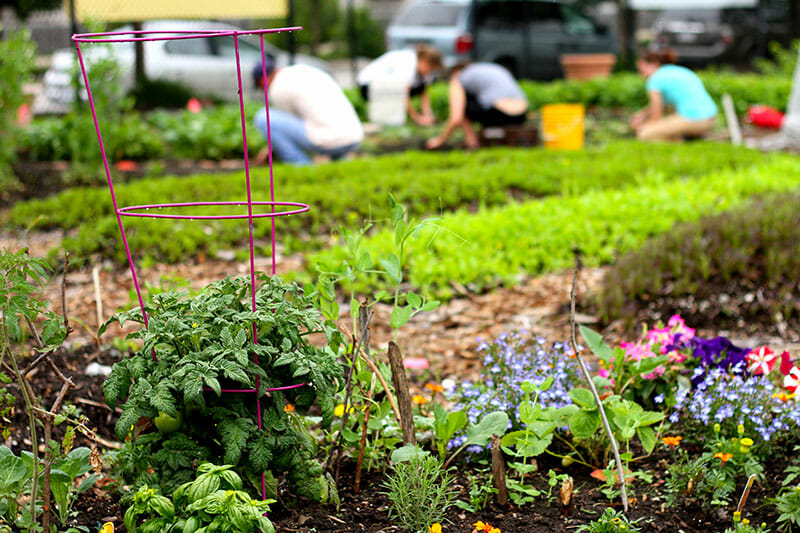 Through a 2010 partnership with the nonprofit organization Growing Power, the garden was able to begin offering job training in urban agriculture to youths and turn the site into a commercial farm. Community members are still able to work their own plots, but the farm now sells its produce through a farm stand, a city-wide CSA, and even a bike-centered vegetable delivery service for the neighborhood.

“We don’t have to recruit. The teenagers recruit themselves, and the kids decided on their own that Saturday is ‘farm day,'” Holbert said. With 90 spots for internships and roughly another 70 younger children helping throughout the summer, Holbert says many have raised themselves–and each other–on the urban farm. 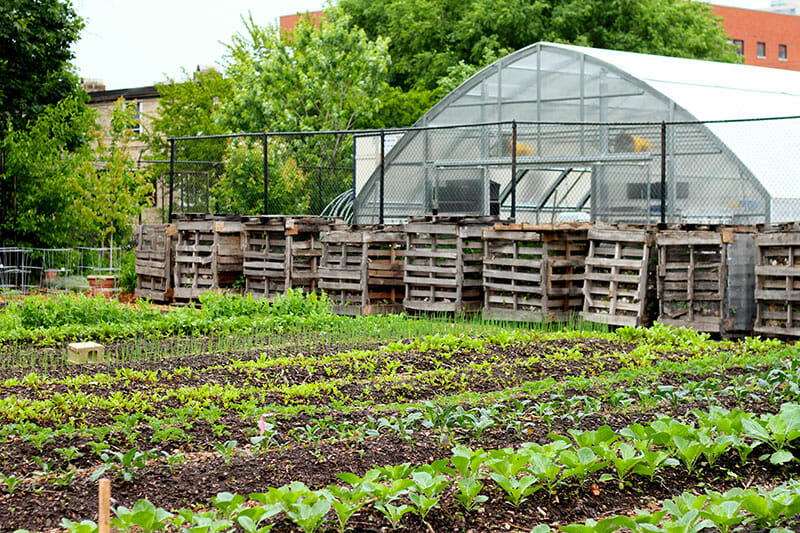 Summer program supervisor Stephanie Budd pointed out that while the area isn’t technically a food desert, social norms effectively make it into one. “There’s a grocery store within half a mile, but it crosses gang territory, so residents basically don’t have access to fresh produce,” she said. That’s why she’s so enthused to work with the youth every year, teaching them skills from vermicomposting to marketing for the farm stand. And of course, there’s the attraction of getting healthy food to those who need it the most.

“There’s something about a little kid asking for kale that I just can’t resist,” said Budd.