This Is the Best Comic Book About Bees You'll Ever Read - Modern Farmer
Animals, Lifestyle

The track record of having a bee as your main character in entertainment is, uh, spotty to say the least. Bee Movie was a box office dud and critical flop. And the ’70s anime import Maya the Bee, absurdly catchy theme song notwithstanding, is nobody’s idea of a good time. But then there’s Clan Apis, […] 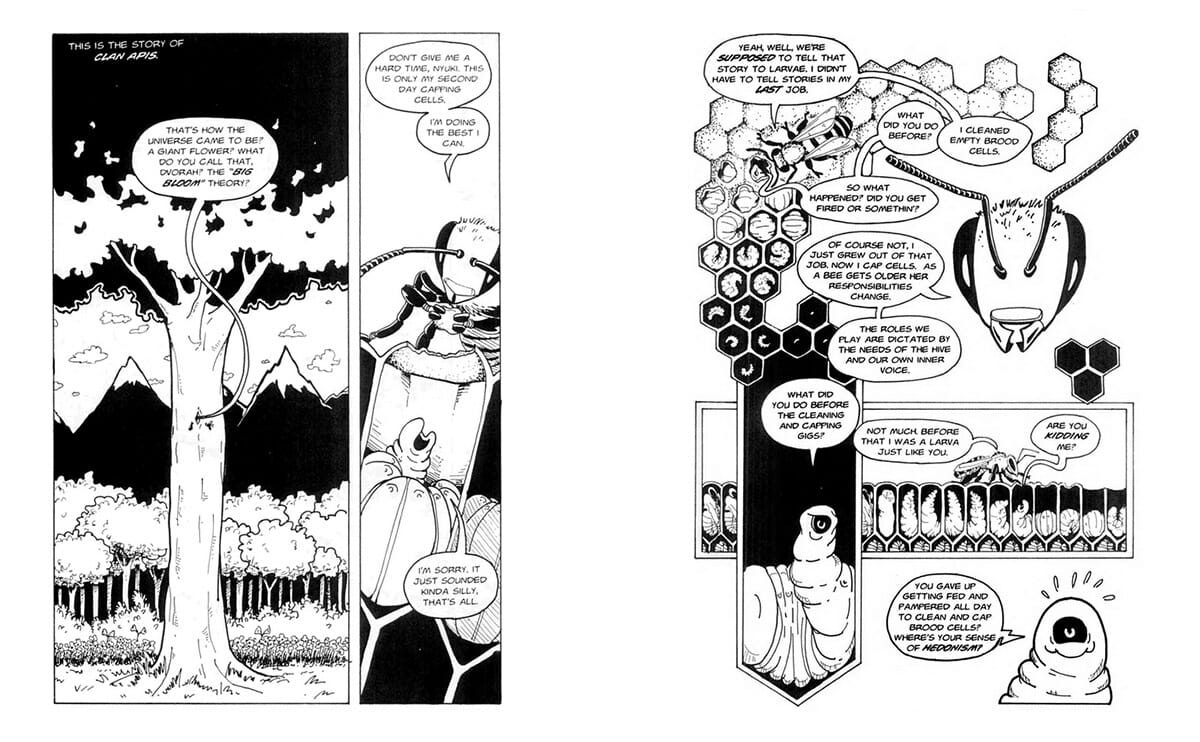 The track record of having a bee as your main character in entertainment is, uh, spotty to say the least. Bee Movie was a box office dud and critical flop. And the ’70s anime import Maya the Bee, absurdly catchy theme song notwithstanding, is nobody’s idea of a good time. But then there’s Clan Apis, a black-and-white graphic novel published first as a five-issue run in 1998 and then released as a trade paperback in 2000. The book stands tall as not only the best graphic novel we’ve ever read about bees, but as one of the better graphic novels we’ve ever read, period. 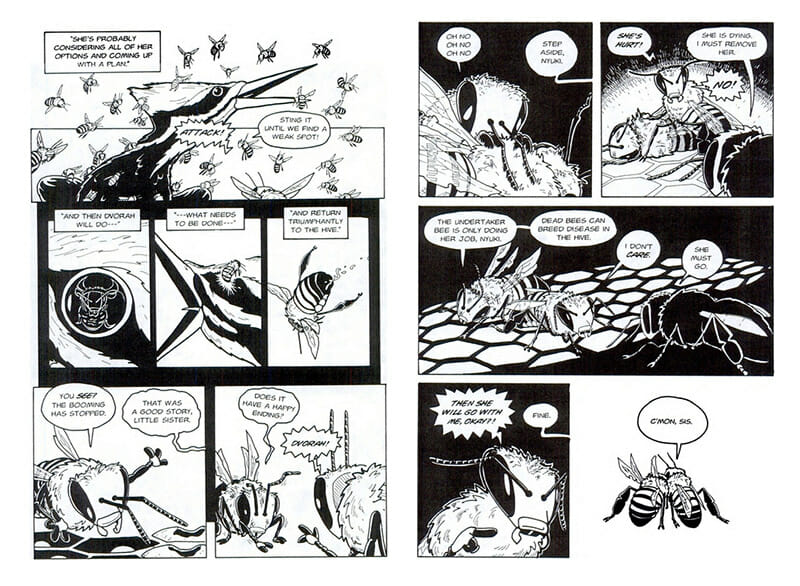 Penned by biology professor and entomologist Jay Hosler, Clan Apis tells the story of a honeybee Nyuki (the Swahili word for “bee”) from birth to the death. Hosler makes his black-and-white palette an asset, using bold, assertive lines and dynamic panel placement reminiscent of Jeff Smith’s Bone, (which Hosler cites as a major influence). The book does a sly job of working some serious science about the honeybee in, while providing a propulsive, surprisingly touching plot. There’s plenty to be learned while reading, including a breakdown of swarm behavior, the metamorphosis process of bee larvae, and an illuminating look at the steps of a honeybee dance, but Hosler has an eye for action sequences and a gift for goofy back-and-forth banter that makes all the learning go down easy.

Modern Farmer caught up with Clan Apis author Jay Hosler, who took time out of his very busy finals season as a professor of biology at Juniata College, to chat about bees and Clan Apis.

Modern Farmer: How you’d get started with Clan Apis?

Jay Hosler: I’d been a doodler and a cartoonist since I was in elementary school, and was a cartoonist for my college and graduate school newspapers. And I’d always been a comic book reader. But those interests ran in parallel to my work as a biologist. It was right around the time I was getting ready to go to my post-doc at the Rothenbuhler Honey Bee Lab at Ohio State University — which is no longer there, unfortunately — that I read this book by Mark Winston called The Biology of the Honey Bee. And I remember thinking as I read it “Gosh, someone should make this into a comic.” And about a year later I realized that someone should be me.

So I applied for a small grant from a funding agency that no longer exists, and got the money to publish the first comic. The book is 160 pages, it’s in five chapters, and each chapter was originally a single, floppy comic.

I decided to try to tell the story of a honeybee’s life. I got this analogy from some children’s librarians who are friends of mine: a good story is both a window and a mirror. So the mirror part is that bees are a lot like us. They have families, they live in a big group, they work together, they live, they die. And then there’s the window, and that’s the opportunity to peek into an alien world. So they’re different enough and strange enough to be really interesting, but similar enough that on some level we can really relate to them.

JH: The book starts with this quote by Stephen Jay Gould: “We won’t fight for what we don’t love.” From an environmental standpoint I often talk to people who talk about how scary bees are, or hate bugs. I didn’t set out to try to make people cry, but I’m glad if they do. Because it suggests an emotional connection with an organism that normally would be beneath their contempt, on some level. Something to be smashed.

The hope is that it might, in some small way, contribute to people’s appreciation to how strange nature can be. If I didn’t know this about bees — and bees are pretty common — what don’t know I about all these other weird things in nature?

MF: What’s the most common misperception people have about the honeybee?

JH: I think the idea that if a bee sees you, it wants to sting you. It’s a very funny sentiment. I’ll be with people and they’ll see a bee and be like, “Oh my God it’s going to come and sting me.” As if this organism is just flying around looking for humans, like some sort of honeybee hitman. And then they start waving their arms around, I’m like, “Just stand still.” The bee does not want to die, and there’s nothing to defend out here away from the hive.

It’s really sort of anthropocentric. The bees exists and they care a lot about us, so much so that they want to sting us whenever it’s possible. I think that it’s an important notion that bees are completely indifferent to us. They could be grateful for farmers and whatnot that provide pollen. But on a very important level, they just don’t care.

JH: Well, I’ve gone through venom desensitization, and I have been stung since I suffered a major reaction. But the truth is once you’ve almost gone into anaphylaxis, that’s pretty scary.

MF: So desensitization, they’re injecting you with bee venom?

JH: I went to an allergist and they start giving you shots, and then they work you up until you’ve got the equivalent of hundreds of bee stings, in terms of what they’re giving you.

It was a really weird thing. Most people who never encounter bees will never develop the allergy. And people who work with bees all the time tend to be desensitized. But researchers like me who work with bees but only get stung at a very low frequency tend to build up these allergies. The truth is, I was sorta scared outta my mind. I had two little boys at the time, and that was at the forefront of my mind.

My wife looked at me once, and said, “You know, it’s like being married to a policeman. I don’t know if you’re coming home at night.” And I thought, you know, that is probably not a stress I need to hit her with. And it was stressing me out too. I’ve since started working with butterflies with a colleague in my department. And I’ll probably develop an allergy to them at some point, but I’ve got a window to get some data.

JH: They don’t. But! Their scales — oh man. People who work with lepidoptera — the scales can really get to you.