Can a Lawsuit Save America’s Bees?

On a warm April afternoon in Oakdale – a small farming town in the San Joaquin Valley of California – beekeepers Steve Ellis (pictured above, with his hives) and Jeff Anderson sit at a dining-room table built for 10 in Anderson’s rural home. Ellis and his bees are visiting from his home base in Minnesota […] 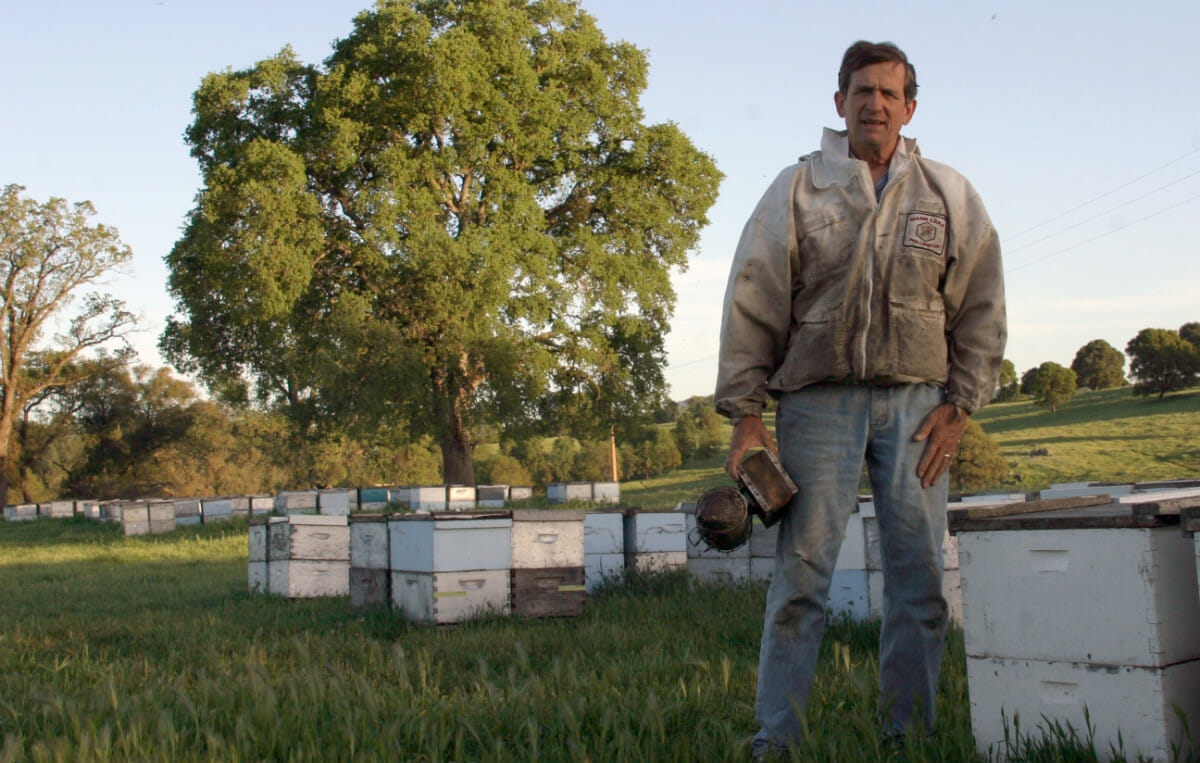 On a warm April afternoon in Oakdale – a small farming town in the San Joaquin Valley of California – beekeepers Steve Ellis (pictured above, with his hives) and Jeff Anderson sit at a dining-room table built for 10 in Anderson’s rural home. Ellis and his bees are visiting from his home base in Minnesota so that the bees can pollinate California almond crops during the Spring, but business is not the only reason for his visit.

On the kitchen wall hangs a plaque in the shape of a bumblebee that reads “The Bee Attitudes.” The two men explain their take on beekeepers’ standard view of environmentalists.

“Most are kind of philosophically opposed to quote unquote ‘wacko environmental groups,’ says Ellis, a wiry man with gentle eyes who has been keeping bees commercially for 33 years, “because they’re going to be the downfall of the world.”

But now the two camps are unlikely partners in a David and Goliath battle. Ellis and a handful of other beekeepers from around the country are teaming up with some of the most powerful and sophisticated environmental groups in the U.S.

They’re plaintiffs in a lawsuit, Ellis v. Bradbury (read the complaint here), against the Environmental Protection Agency (EPA) to stop the use of two pesticides that Ellis and other beekeepers believe are killing their bee colonies. The suit not only attempts to eliminate the use of neonicotinoid pesticides containing the ingredients clothianidin and thiamethoxam, which damage the central nervous system of insects, but to challenge the way the EPA approves pesticides. If they win, it could change the way pesticides hit the market. If they lose, Ellis and the others believe it could be the end of beekeeping as we know it.

They are far from alone in their concerns – the European Union voted in late April to temporarily ban some neonicotinoids, including those fingered in the suit, for two years because of their detrimental effect on honeybees.

“We’re right on the edge of losing it, and we need help right now,” says Ellis.

To that end, the beekeepers set out to find allies. They include nonprofit advocacy groups such as the Center for Food Safety, Beyond Pesticides, the Sierra Club, Pesticide Action Network North America, and the Center for Environmental Health who collectively filed the suit (as well as three other beekeepers) in federal court in late March. The EPA has until mid-May to respond. 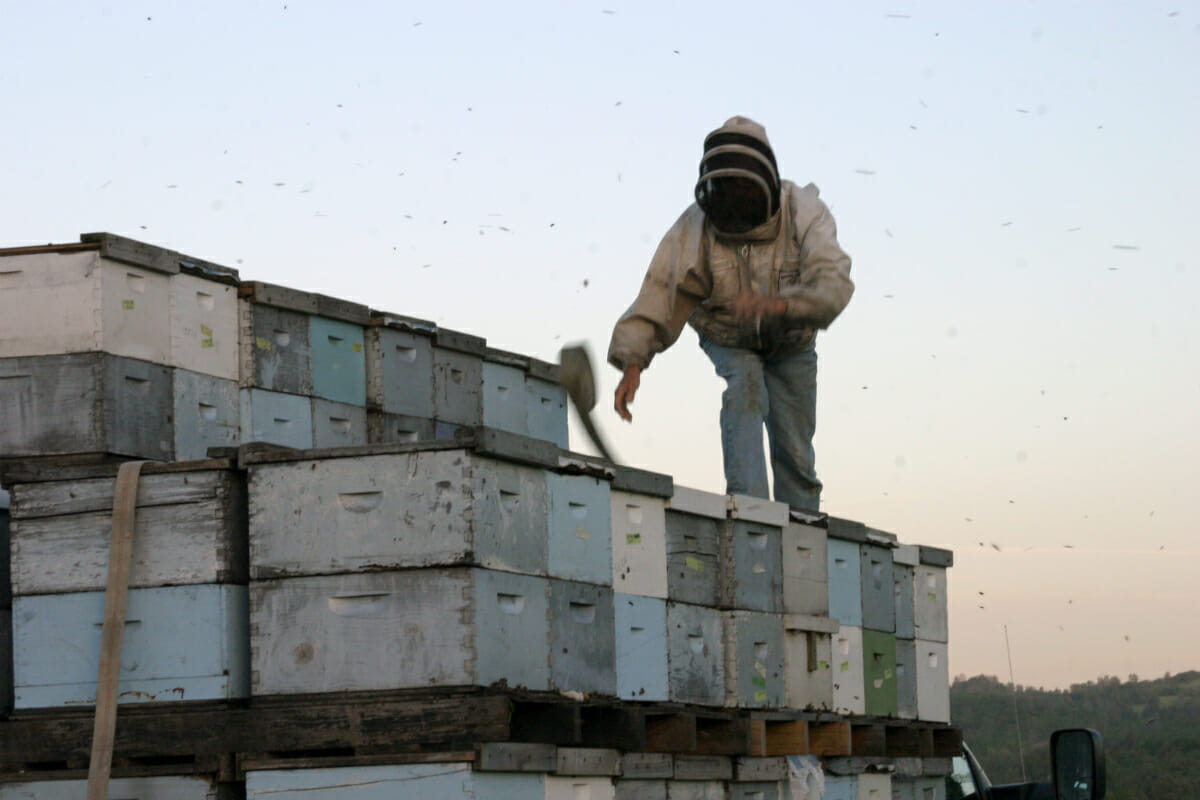 Ellis straps his hives down to ready them for transport

Timeline: The European Ban on Neonicotinoids

For Ellis and Anderson, the suit is the culmination of more than a decade of work to address the impacts of pesticides on their livelihood. (They successfully teamed up against the Minnesota state Supreme Court in 2005 to protect bees from pesticides – but more on that later.) This time around, Anderson is not actually named in the complaint. That’s because the legal team wanted someone who could talk to beekeepers that wasn’t part of the suit.

For the EPA, the complaint represents one of the first major attempts to address a phenomenon called colony collapse disorder (CCD) through the courts. CCD came to the fore in 2006 when beekeepers reported that their honeybees were vanishing in devastatingly large numbers. Many of the bees that did return to their hives ultimately died from myriad viruses, mites, and funguses that appeared to be hastened by the bees’ inexplicably compromised immune systems. In total, U.S. honeybee keepers are now losing on average 30 percent of their hives to CCD annually.

“We’re right on the edge of losing it, and we need help right now.”

Ellis says that in his case between 30 and 40 percent of his bees die each year due to the pesticides. And that’s financially unsustainable – under normal circumstances beekeepers expect to lose just 10 to 15 percent of their bees annually.

The dire situation has garnered international attention and at stake is not only the fate of honeybees and the ecosystems that depend on them for pollination, but perhaps more tellingly the farmers who require the hives of commercial beekeepers to pollinate their crops, including almonds, stone fruits, avocados, apples, and carrots. California’s almond crop alone requires 60 percent of all commercial beehives in the U.S. to meet their pollination needs, and this year beekeepers, including Ellis, struggled to meet that demand. A new report by the U.S. Department of Agriculture and EPA states that, “pollination contributes to crop production worth $20-30 billion in agricultural production annually,” and USDA’s lead bee researcher, Jeff Pettis, was quoted as saying, “We are one poor weather event or high winter bee loss away from a pollination disaster.”

Ellis and the environmental groups believe that clothianidin and thiamethoxam – insecticides applied to dozens of crops spread over more than 100 million acres by farmers seeking to protect their yields from a variety of insects – are in large part to blame for colony collapse disorder. They say that their bees become contaminated with the nerve agents while foraging nectar from the treated crops. They cite recent independent scientific studies that conclude neonicotinoids are harming bees, but the EPA states on its website that the cause of CCD is unclear and could range from “varroa mites” and “Israeli Acute Paralysis virus” to “bee management stress” and pesticides, among other problems.

As to why the EPA has been slow to name pesticides as the primary culprit, Ellis says, “They seem more interested in getting products registered quickly, than doing work to protect the environment from the result of those products.” 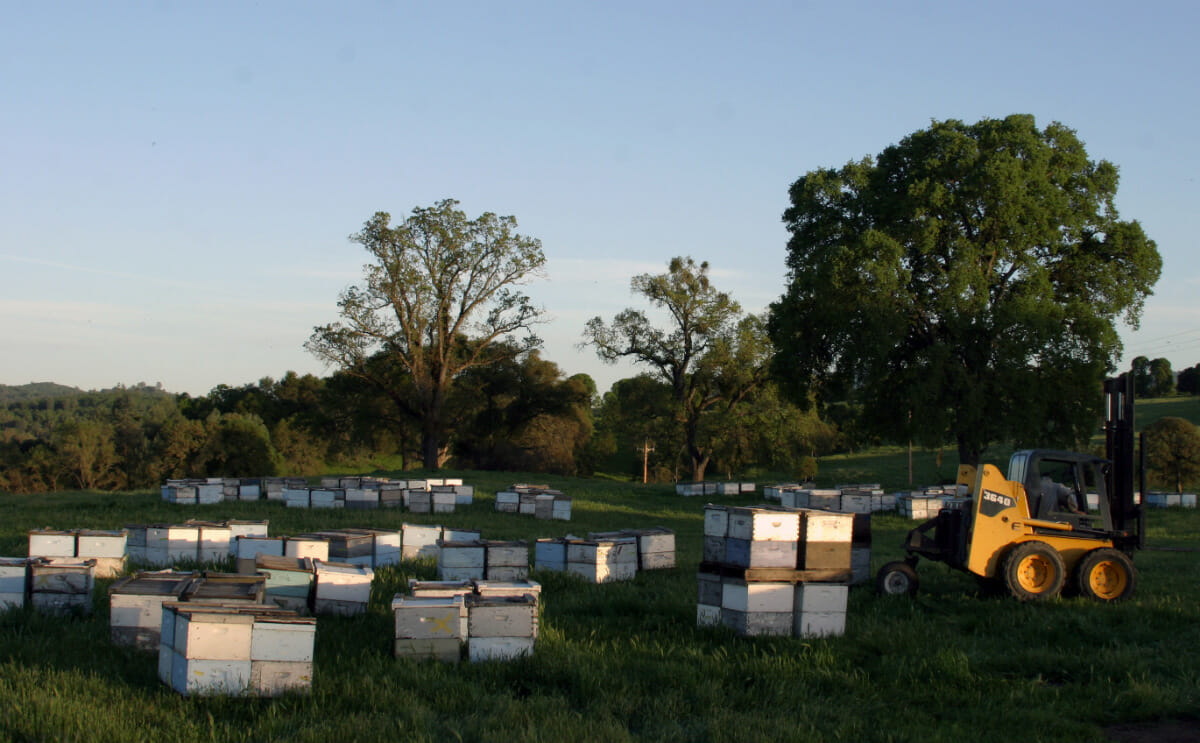 Beekeepers may not come to mind when the average person thinks “farmer,” but Ellis and Anderson are definitely that, down to their sunburned cheeks and rough hands. They both spend sunrise to sunset caring for their bees and managing their businesses. Unlike some farmers though, they are no strangers to the judicial system.

In Minnesota, where both men have homes and Ellis runs his business, Old Mill Honey Company, the two successfully appealed a case to the state Supreme Court in an effort to protect their bees from pesticides in 2005.

The Supreme Court of Minnesota found that the beekeepers had a right to sue a private property owner who sprayed a popular pesticide made with a chemical called carbaryl on their land, but did so knowing honeybees were foraging there and would be killed by the poison. The Supreme Court sent the case back to the district court at which point the pesticide users offered to settle and the state’s Department of Natural Resources decided to stop using the pesticide. The win emboldened Ellis to return to the courts after his hives again began to dwindle in the late 2000s.

Days before the complaint was filed in late March, Jim Jones, the acting assistant administrator for EPA’s Office of Chemical Safety and Pollution Prevention, sat at Anderson’s large dining room table to learn about the beekeepers’ difficulty pollinating California’s almond crop. They showed Jones their ailing hives, explained the economics of their industry, and visited almond orchards.

Despite those conversations and other efforts to end the pesticide use, Ellis says the agency didn’t budge. He and other beekeepers decided to sue the EPA. “When everyone said ‘we won’t do anything’ you’re left with ‘what are your options,’” says Ellis. “We have to defend our bees. It’s our livelihood.”

Ultimately, if a person or group has a beef with a pesticide, they must take it to the EPA’s doorstep. The Federal Insecticide, Fungicide and Rodenticide Act (FIFRA) tasks the agency with regulating the use and sale of pesticides to protect humans and the environment. But when it comes to putting pesticides on the market, the EPA can “conditionally” greenlight products. That means they OK a pesticide for use with the understanding that additional scientific data is needed before final registration can be approved. And that process, the lawsuit says, has been abused.

“I’m hopeful this will be a catalyst to a better place. We don’t want to be the last generation doing this.”

According to the complaint, thiamethoxam and clothianidin were conditionally registered in 2000 and 2003 respectively. There are no set deadlines for conditionally registered products to be reviewed, and more than a decade later, the requirement for basic scientific studies on the impact of the insecticides has gone unmet. Among the outstanding studies, the complaint says that EPA hasn’t fulfilled its stated requirement to “complete an adequate life cycle study, and evaluation of exposure and effect to the queen bee.”

“They have remained conditionally registered for 10 years without adequate information,” says Peter Jenkins, lead counsel on the suit for the Center for Food Safety. “That wasn’t what Congress intended, and we think that’s a compelling argument to make before a judge.”

The suit also argues that the EPA has denied that certain uses of clothianidin pose an “imminent hazard” to honey bees and made this final determination without considering new data about bee kills. It also claims that the EPA repeatedly failed to publically announce new or changed uses of the pesticides. And this could provide some relief for beekeepers. When it was found in recent similar cases that the EPA failed to meet public notice requirements, those pesticide registrations were in part withdrawn.

For many watching the case from the sidelines, of great interest is how the EPA will weigh its legal obligations. When the EPA registers a pesticide, it must balance the risks and benefits the chemical poses to the national food supply. Given that on the one hand neonicotinoids are used on corn, cereals, and sugar beets (among other major agricultural crops), and on the other that one-third of U.S. crops depend on pollinators, the stakes are enormous.

“I’m not familiar with another case where there would be anywhere near that large of an economic impact on both sides of equation,” says former EPA attorney Tom Boer, who is now with the environmental defense law firm Barg Coffin Lewis and Trapp.

For Ellis, the lawsuit is a distraction from what he would rather be doing – tending to his bees. While stacking wooden boxes full of beehives onto a flatbed truck in preparation for moving his beehives from California back to Minnesota, Ellis said, “I’m hopeful this will be a catalyst to a better place … We don’t want to be the last generation doing this.”