The Rise of the Virtual Farm - Modern Farmer
Lifestyle, Technology

The Rise of the Virtual Farm

Just a few years ago, the idea that people would spend their free time running virtual farms would have seemed ludicrous. Then FarmVille happened. 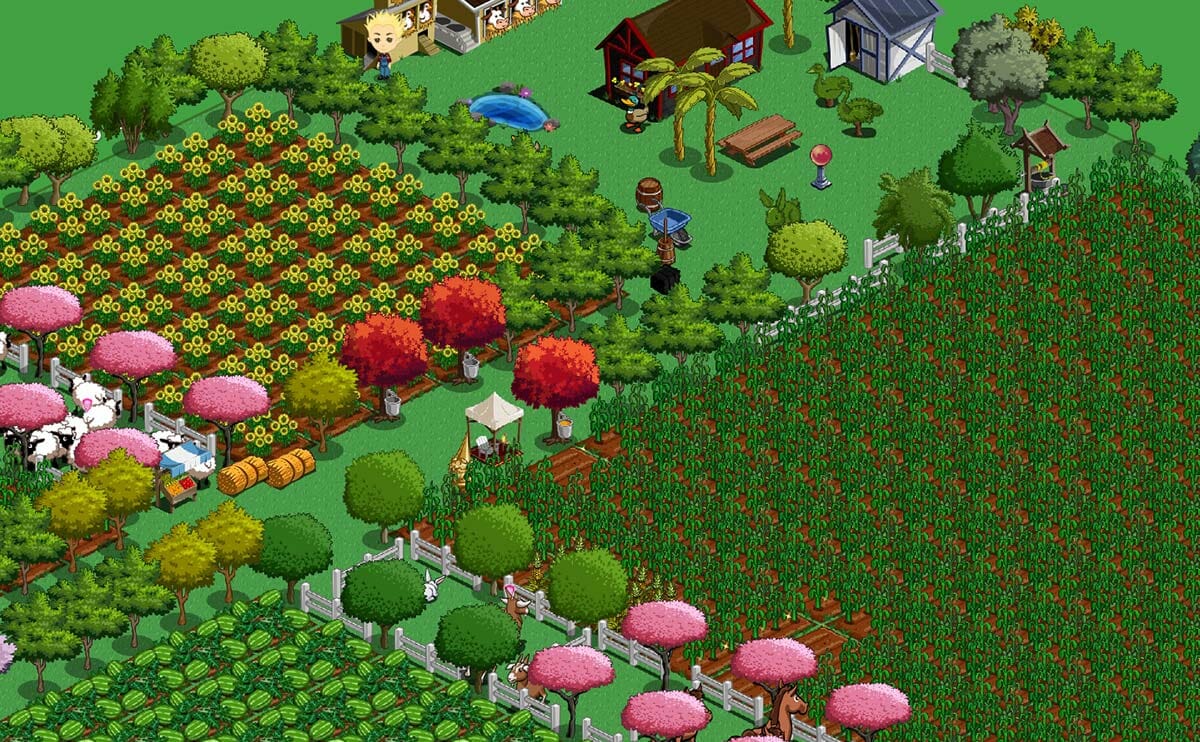 To many, it still does. But the runaway success of Zynga‘s FarmVille, released in 2009, has made the unlikely inevitable.

According to experts, FarmVille was a game-changer (sorry): hundreds of millions of people took to Facebook to grow virtual crops.

FarmVille launched casual gaming into the forefront, thanks to simple mechanics and deep integration into Facebook’s social network. (Thus all those annoying requests to help plow someone’s field.) It also helped spur a boom in games with a farming mechanics front and center. Unlike, say, tower defense games (think Atari’s Rampart, where you are fending off attacking forces), empire building (Settlers of Catan) or role-playing (World of Warcraft), farm mechanics depends on patience – you have to get something, watch it grow and then harvest at the right time. “In the old days, farming mechanics was sort of an aside,” says Jesse Schell, founder of Schell Games, a company that makes a variety of online entertainment products.

Now, he says, all kinds of games that don’t overtly reference farming use that mechanic – from FrontierVille, to CaféWorld and beyond. It’s a powerful paradigm even when the action has nothing to do with fields or vegetables, although, game designers definitely see the fields and vegetables as infinitely more marketable (see: Farmerama, Farming Simulator, etc.) in a post-FarmVille world.

And then there are the virtual games that are not casual at all. In 2007, European gaming company Giants Software started Farming Simulator, a game that attempts to mimic life on the farm as much as possible. Real conditions – and real tractor models – are deployed for those interested in trying a hand at the farming without real-world acreage. It’s a world away from FarmVille. “They have completely different audiences,” says Thomas Frey, art director at Giants Software, in an email, “Games like FarmVille are not really about farming. They could have a different theme and still get the same audience they have at the moment, which is the casual player that wants only a quick bit of fun in between office work. The same players will find our game too complicated and slowly paced.”

“Our own audience on the other hand is very invested in the game and farming as a profession. They want to play a real farmer and play as realistically as possible.”

There is a sizeable crowd for real, virtual farming: so far, over three million games have been sold and Farming Simulator is still in the top 10 charts for PC Games in Europe.

While the bosses at Zynga believe the future is in casino games, not farming, FarmVille seems unlikely to disappear. Companies from McDonalds to Cascade Organics have developed tie-ins within the game and the sequel FarmVille 2 brings in a half-million dollars a day. As Schell notes, “The notion of taking care of animals and crops is rewarding on a primal level.”

Even if it’s just on our laptop screen, we still love to watch something grow.

Popular
The Fertilizer Shortage Will Persist in 2023Shea Swenson
7 Smokable Plants You Can Grow That Aren’t MarijuanaBrian Barth
Agricultural Runoff Pollutes Well Water, a ‘Public Health Crisis In the Making’Madison McVan, Investigate Midwest
Why Don’t We Eat Turkey Eggs?Dan Nosowitz
Move Over, Mezcal. A Sustainable Tequila Alternative Is Taking Over.Hollie Stephens
Explore Modern Farmer
Related
Features, Food Security, Labor
The Rise of Virtual Farmers MarketsLeah Borts-Kuperman
Environment, Labor, Water
California Farms and Farmworkers Attempt to Recover From Record FloodsNaoki Nitta
Books, How-To, Lifestyle
How to Turn Your Garden Into a Business, No Matter the SizeEmily Baron Cadloff
Aquaculture, Technology
Can Interactive Mapping Tools Guide Shellfish Restoration?Bridget Shirvell
wpDiscuz
We use cookies on our website to give you the most relevant experience by remembering your preferences and repeat visits. By clicking “Accept”, you consent to the use of ALL the cookies.
Cookie settings ACCEPT
Privacy & Cookies Policy