After Prohibition, the tradition of locally grown and sourced malt died out in America, even for craft brewers. But a small band of micro-malters aim to change all that. 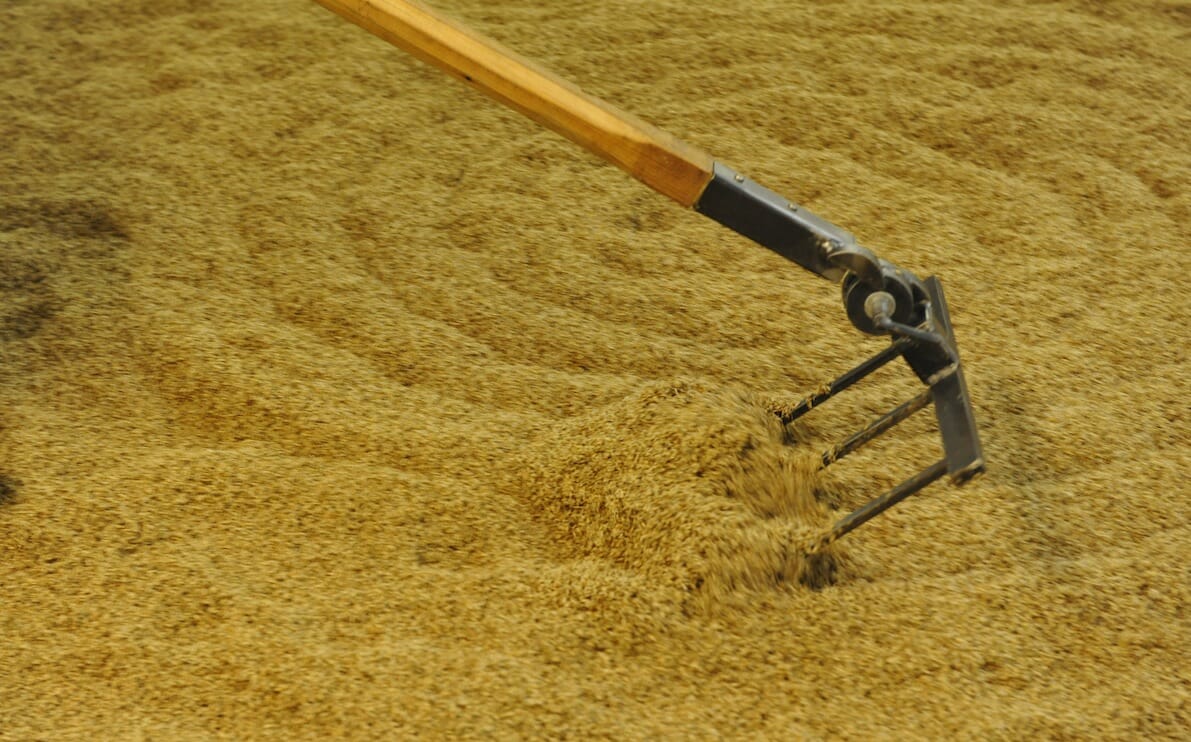 A few years ago, Brent Manning and Brian Simpson found out that three of the country’s biggest craft breweries were going to be opening up new production facilities right in their backyard in Asheville, North Carolina. Everybody seemed stoked about this, but Manning and Simpson were slightly less so. As green entrepreneurs who had previously started a biodiesel fueling station together, they wondered how much the three breweries – Sierra Nevada, New Belgium, and Oskar Blues – would support the area’s agriculture. And the answer they came up with was: not much.

“In many ways this parallels where craft brewing was in the ’70.”

For starters, they would not be buying their main ingredient, barley, from local farms. Even if they wanted to, they couldn’t: barley suitable for making beer was not grown in Asheville. Furthermore, to make beer out of barley, the grains first have to be malted. Malting is a special process where grains are soaked, sprouted, then roasted, which allows the starch in the grains to be converted to sugar, then to alcohol, in the brewing process. (If you’re wondering if malted barley is the same stuff in malt balls and malted milkshakes, the answer is yes.) There were no malting facilities in Asheville.

Insurmountable problems? Not really, for Manning and Simpson, who are part of a growing movement of “micro malt houses” making truly local beer possible – and, in the process, bringing back long-lost heirloom crops. 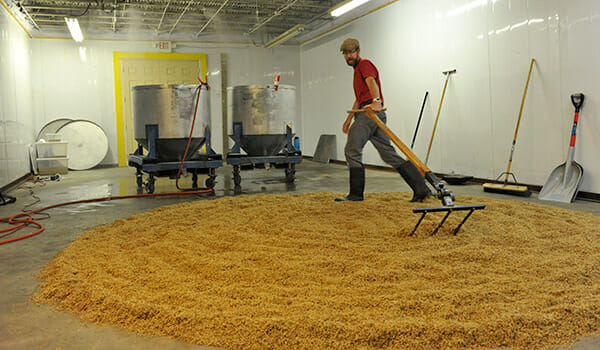 Brian Simpson uses an old-fashioned rake to sift through malt at Riverbend Malthouse.

In September, 2011 they opened Riverbend Malt House in Asheville. They malt their own barley, wheat and rye from area farmers, and are currently selling to 12 commercial breweries and local homebrewers. It’s the first commercial malt made and produced in their area since before Prohibition.

“We wanted to be a part of developing a real southeastern or Appalachian style beer,” says Simpson. “The Pacific Northwest has their hop bombs, why can’t we have our thing?”

To date, four similar operations to Riverbend have opened their doors: Valley Malt, in Hadley, Massachusetts, Rebel Malting in Reno, Nevada, Michigan Malt in Shepherd, Michigan, and Colorado Malting Company in Alamosa, Colorado. Skagit Valley Malting Company, outside Seattle, is slated to open soon, and Rogue Brewery in Newport, Oregon has begun malting its own grains, too.

Andrea Stanley, part of the husband-wife team who owns Valley Malt, is starting a craft maltsters guild, and estimates there are five more coming in New York state alone.

Speciality malthouses have sprung up across the country

They’ve got tiny staffs, and even tinier margins. (Colorado Malting Company, for instance, produces 13,500 pounds of malt a week, compared to the 15.6 million put out by Rahr, one of the country’s biggest malthouses.) But these micro-maltsters are hoping to be the Davids to the Goliaths of the massively consolidated U.S. malting industry.

And hey, why not? It happened with beer.

“In many ways this parallels where craft brewing was in the ’70s, when we had less than 40 small breweries in country trying to make something different. And today we have thousands of small breweries,” says John Mallett, Director of Operations at Bell’s Brewery, in Kalamazoo, MI, who is writing a book on malt. “We’re starting to see these [malting] entrepreneurs asking a lot of questions, and trying to start something up, and it’s an exciting time.”

Bringing It All Back Home

According to one industry report, U.S. brewers import over a quarter of all of their malt from Europe. It didn’t use to be this way. Before Prohibition, mom-and-pop malt houses operated all over the U.S., sourcing locally grown barley, and selling to regional breweries. But after the repeal of Prohibition, they died or were bought up. A handful of major players like Cargil and MaltEurop took over, and focused on making malts that would perform well in the weak-flavored, low-alcohol lagers from big breweries like Coors and Anheiser Busch.

Although malt more appropriate for craft beer is also made in the U.S., oftentimes brewers turn to Europe, where artisanal malt houses still operate much the way they have since the 1800s. At San Francisco’s Magnolia Brewpub, for example, nearly all the beers are made with a British barley variety, Maris Otter, from a centuries old UK malt house that hand-dries its sprouted grains on the floor, breaking up the clumping rootlets with a medieval-looking rake.

“If I could get that same quality here, I would,” says Magnolia’s Head Brewer, Dave McLean.

The irony is, while craft brewers are the main importers of high-end malt from Europe, they’re also the ones most likely to make “all local” beers, in the mold of Sierra Nevada. (The craft brewing pioneer makes an “Estate Ale” with hops and barley grown on the brewery grounds in Chico, CA.) That’s where micro-malters come in.

Owner and brewmaster, Jack Hendler, says the Valley Malt grains tend to be smaller than those from the Midwest. “The grains certainly have their own unique flavor and feel to them,” says Hendler. “New England is kinda limited on grain production, and this grain isn’t designed for the mass market per se. But it has what wine people would call terroir.”

Heirloom varietals of barley have virtually disappeared in the U.S.

Before he opened the micro malt house Colorado Malting Company, Jason Cody and his family grew grain for Coors. The brewery always told them exactly what varieties to grow. One of the few maltsters who grows all his grain, Colorado Malting Company grows two-row barley called Scarlet, and a soft white wheat called Centennial. (Although brewers mostly rely on barley to make beer, wheat, rye and even oats are also used.) This spring they will begin offering breweries their own custom plots to grow whatever they want. Big breweries typically dictate the kinds of grains farmers grow for them, based on features like high yield and high protein content, the latter of which helps with foam stability. Because of these demands, many heirloom varietals of barley have virtually disappeared in the U.S. But the rise of micro-maltsters could reverse that.

The soon-to-open Skagit Valley Malting, in Burlington, Washington, is working with scientists at Washington and Oregon State Universities to both develop new, non-GMO barley varieties that grow well in the region, as well as rediscover heirlooms that once grew there. The results so far as been promising: low protein barley, like the kind grown in parts of Europe so prized by craft brewers, does well in the Skagit Valley, because the maritime weather is similar to barley-growing parts of Britain.

In an interesting development, researchers uncovered barley originally grown in the local settlement of the Hudson Bay Company, in the 1830s, presumably to brew beer for the employee residents. 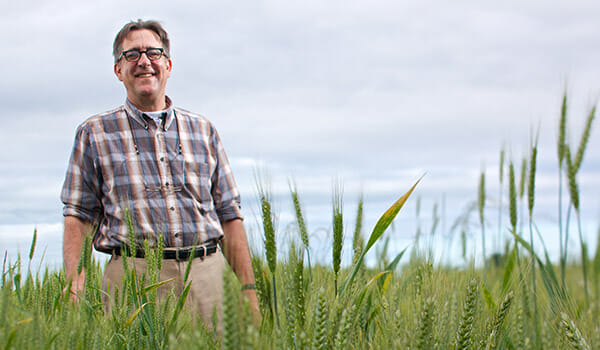 “Things that were deemed ‘not good for bread’ or ‘for malt’ doesn’t mean they aren’t excellent for local craft-type bread or malt,” says Dr. Stephen Jones, Director of WSU’s Research and Extension Center at Mt. Vernon.

Riverbend is involved in similar research with North Carolina State and Virginia Tech. One day, Riverbend’s Brent Manning says, he hopes local farming communities will be merrily harvesting unique grains that will flow to small malt houses, and then to regional breweries in a vision that sounds like a Portlandia-style scenario, in a good way.

In the meantime, there is a lot of hard work to be done. Riverbend does floor malting ”“ that is, hand turning the grain with a rake after germination. Like the Zen monks sweeping the floor and sweeping the floor again, they’re up late a night and early in the morning raking round, and round, and round. Bringing the malts of the past into the future is going to require faith, and more than a little patience.

Note: An earlier version of this story had a quote regarding Coors’ use of “non-GMO barley.” At this point, there is no genetically modified barley in commercial use.