The Japanese know a good thing when they see it. Since ancient times, food foragers in the southern Japanese islands gathered a particular woodland plant for food and medicine known for its regenerative properties. 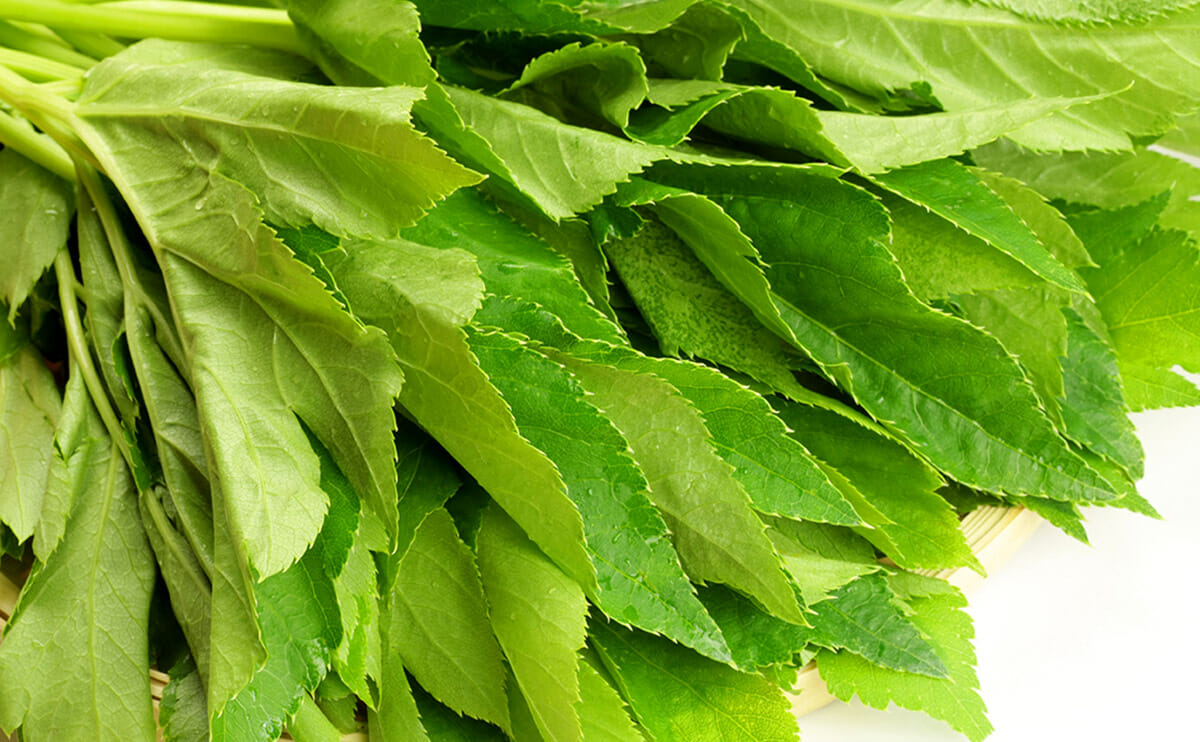 The Japanese know a good thing when they see it. Since ancient times, food foragers in the southern Japanese islands gathered a particular woodland plant for food and medicine. When they sliced the stem, it oozed a thick golden liquid, and, a mere day later, a brand new leaf appeared as if by magic. They called the plant Ashitaba, which means “tomorrow’s leaf.”

Increasingly, the magical nature of ashitaba’s regeneration is fueling consumer interest in it as a health food and scientific research into its healing powers. Ashitaba tea, noodles, fruit drinks, candies and even ice cream are widely available in Japan and the Phillipines. In the United States, you can find ashitaba in Asian markets or look online for packaged ashitaba tea. Ashitaba’s leaves and stems, along with the yellow sap, have a rich concentration of nutrients and compounds that are said to prolong life and regenerate the human body, much the same way the plant regenerates its leaves. It is now in high demand in international and domestic herbal tea and supplement markets.

In the growing grounds of the San Francisco Botanical Garden, garden curator Dr. Don Mahoney picks a leaf from an ashitaba plant, much like those ancient Japanese foragers might have done. The taste is bitter at first, then warm and fresh. “Very celery-like,” proclaims Mahoney, “It takes a while to get used to, but pretty soon you crave the taste.”

He’s right ”“ the taste is remarkable. It could be at home in a salad, or used as a subtle flavoring for rice or soup. The golden sap is high in a substance called chalcone with reported antibacterial, antifungal, antitumor and anti-inflammatory properties. Research is going on at the moment about the use of these regenerative compounds for everything from rapid wound healing to anti-aging cures.

Ashitaba looks a bit like its cousin, angelica, with ribbed stems and deep green dissected leaves and a fat, white, tapering root. It forms an umbel, a junction of small, greenish-white fragrant flowers.

“Angelicas like to be cold stratified,” advises Mahoney. To do so, he kept a flat of seeds outdoors in 30-degree nighttime temperatures to encourage germination. A few weeks in the fridge (or outside during winter) would have the same effect. “Nearly all of my last batch of seeds germinated,” he says. They grow very slowly at first. He recommends “good soil and 4-inch pots until they are about the size of a fist,” then put them in open ground, or in 1-gallon pots. “They’ll take off.” 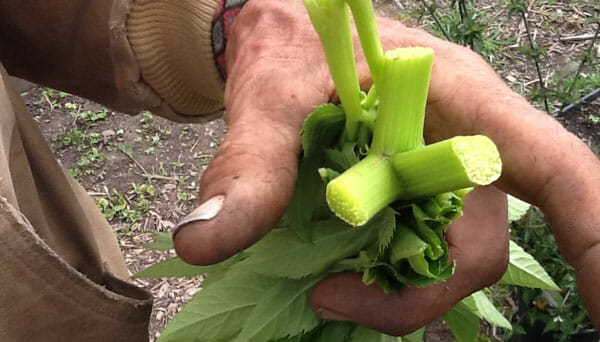 Cut stems of the ashitaba plant.

Under the right conditions, they can reach four feet. Ashitaba usually doesn’t bloom until the second year of growth, but once they flower and set seed, they’re done. Some will produce side shoots that can be divided to make new plants. Head them to prevent flowering if you want to keep them perennial, but don’t count on a harvest the first year. Once it flowers, though, it’s a good attractor for beneficial insects, so it can be nicely woven into an orchard plant guild.

It can be harvested for fresh sap and for stems and leaves. Some farms in Asia are reportedly collecting the sap to make antioxidant super brews. A less labor-intensive harvest can be had by continuously trimming one leaf and stem per plant and then drying them for tea or tincture. You can always count on another leaf to appear tomorrow.

Tapioca bubble drinks are fun, and the possible flavor combinations are endless. Here’s a riff on chilled milk tea boba where ashitaba’s health-giving properties shine. Bust out the cocktail shaker and grab some wide straws.

1. Make a strong tea: Place the ginger and ashitaba in a teapot. Cover with boiling water and let stand for at least 10 minutes. Best to do this ahead, so that the tea will be cool enough to blend with the other ingredients.

2. Cook the boba: Fill a saucepan with water and bring to the boil. Make sure the water is at a rolling boil before adding the dried boba. Stir gently to make sure the boba don’t stick together. Turn the heat down a bit, and boil the boba for 12 ”“ 15 minutes. Then, remove the pan, turn off the heat and let it sit for another 12 -15 minutes to allow the boba to finish cooking.

3. Prepare the syrup: While the boba are resting, make a syrup from the water and honey by heating them gently. Stir until fully dissolved then take off the heat to cool.

3. Drain and soak the boba: Strain the boba over a colander into a medium bowl. Add the syrup and stir. Make sure all the boba are covered with syrup. Let them cool to room temperature.

4. Finish the tea: Fill a cocktail shaker with cracked ice. Strain the tea into the shaker, add almond milk to fill. Sweeten to taste with some of the syrup from the boba, but do not add the boba. Shake vigorously and pour into tall glasses. Now add 2 ”“ 3 tablespoons of boba to each glass and enjoy. Use a wide straw to get a few squishy pearls along with the sweet tea in every sip.

For a variation, use fruit juice or nectar in place of the almond milk. Play with combinations.

NOTE: Use the bobas within hours of cooking them. You can store them in the fridge for a day or so, but then they will start to dry out and harden up.

[…] Ashitaba – a Japanese plant you may recognize as Angelica keiskei, the stems, leaves, and roots of which are used for medicinal purposes and in cooking (noodles, tea, etc). […]

[…] Ashitaba – a Japanese plant you may recognize as Angelica keiskei, the stems, leaves, and roots of which are used for medicinal purposes and in cooking (noodles, tea, etc). […]

where can I get ashitaba in which supermarket

Can you plant gynura procumbens in the pot with Ashitaba it is a 16″ pot.