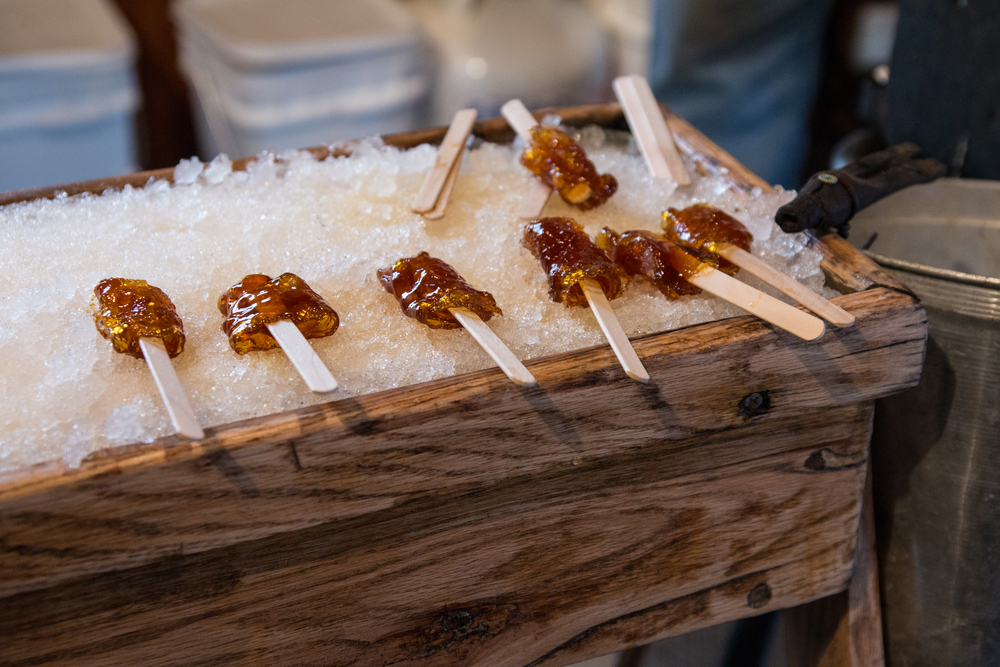 For centuries, maple taffy has reigned supreme as a winter delicacy—and for good reason.

Maple taffy, or tire sur la neige, is simply (as the French name suggests) maple syrup on snow. Originally an Indigenous tradition, the recipe was adopted by French settlers in eastern Canada, specifically around Quebec, and the northeastern US, where groves of maple trees grow the thickest. The winter treat is a simple concoction, although the process of making it is actually quite finicky. But really, there’s nothing that quite compares.

First, you boil the maple sap that you’ve collected by tapping maple trees, and you need a lot of sap. Maple syrup is made at roughly a 40-to-one ratio, meaning you need 40 gallons of sap to make a gallon of maple syrup. Once you have your sap, you boil it down for hours, looking for what maple syrup producer Roland Gagne calls the “magic temperature.”

Gagne has made maple syrup at the St. Pierre-Jolys Museum in the Canadian province of Manitoba, and has spent a decade running the sugar shack at the Festival du Voyageur, an annual celebration of French Canadian and Metis culture. Over the years, he’s rolled thousands of servings of maple taffy, and he says you can see when the syrup has started to transform. “You can bring it to a syrupy state, or you can bring it to a harder state where it will form tighter crystals, or you can boil it to a candy form,” he says. The trick is catching the syrup at just the right temperature and then cooling it down just a little, before pouring the liquid into a snow mold. When you get it just right, the syrup will catch on the snow, rather than melting through it, and you can roll it up on a spoon or a popsicle stick and devour it.

I first tried maple taffy at the Festival du Voyageur as a kid, although it was before Gagne worked the sugar shack. It’s a taste that’s hard to forget: warm and cold at the same time, the taffy is bursting with sweetness and earthiness, a grassy finish that’s made even better by the cold winter air hitting your cheeks. It’s such a simple recipe, but it’s shockingly good.

It can even bring people from around the world to the East Coast, ready to brave the elements for a taste of tradition. “Before GPS, I had a long list of directions,” says Rob Lamothe, owner of Lamothe’s Sugar House in Burlington, Connecticut. One of the largest sugar houses in the state, Lamothe’s has been in business for more than 50 years. He and his wife were all about self-sufficiency, looking to produce as much of their own food as possible. They started by tapping a few trees, and then word of mouth took over. People started calling, wanting to purchase syrup or take a tour. Soon, Lamothe was fielding calls from around the world. “Last year, we had somebody from Germany,” he says. “They planned out their whole trip, they wanted to come to Connecticut.”

For those customers who have traveled a long way, Lamothe has even figured out how to make maple taffy to-go—despite piping hot syrup and snow seeming like critical components of the recipe. Instead, Lamothe makes the taffy on the snow and cools it down quickly by popping it in the freezer in individual portions for customers to heat up later. It’s a twist on the traditional recipe he learned from his French-Canadian aunt Yvonne. “That’s what memories are made out of,” he says.

That sense of tradition is what many sugar shacks, or cabanes à sucre, are trying to keep alive today. Outside of Montreal, Pierre Faucher runs the Sucrerie de la Montagne, a sugar shack that has run since 1978. The business is open year-round, and it welcomes more than 80,000 visitors a year. The sucrerie was even made into a Quebec heritage site, where customers can get a glimpse of the past and learn about the history of maple syrup. “When people reconnect to the lifestyle, they really like it,” Faucher says. “Ever since people have been making maple syrup, they gather around and enjoy the purity of the springtime. It’s a gift of nature.”

Even now, as a man in his 70s who is surrounded by maple syrup every day, Faucher says the taste of maple taffy never gets old. He was about five years old when he had his first taste of tire sur la neige. “I’ll never forget that,” Faucher says. “It was so, so delicious. And I’m 75, and it’s still so delicious.”

Maple syrup can only be harvested when the temperature is just right, usually between early February and late March. If you’re a maple lover, this is the perfect time of year to get out to the local sugar bush for a tour and a tasting. And just like wine, the region and terroir of where the syrup is produced will affect the taste. So pack up some wet wipes and take a road trip to try out a few different sugar shacks near you. This taffy is worth the trip.