Putting the Egg Back in Eggnog 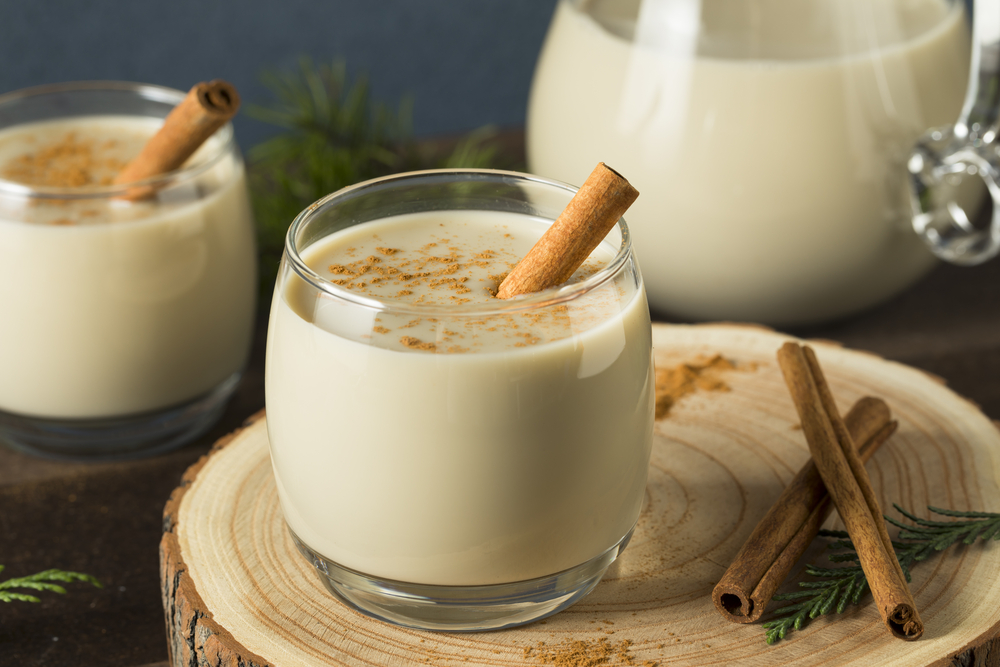 Sales of eggnog will spike this month as many of us chase holiday traditions. For me, it’s hard not to get excited as December rolls around. My chickens are done molting, they’re starting to lay again and I know it’s time for carols and fresh, homemade eggnog.

But the liquid inside the quart-sized containers you’ll find in grocery stores hardly resembles the drink’s rich, boozy origins. In fact, store-bought versions of eggnog hardly contain any eggs—or alcohol—at all.

Originally a drink for elites that demanded expensive ingredients like eggs and cream, eggnog evolved from a drink called posset. The British hot drink was made of milk curdled with alcohol, such as wine or ale. During the Middle Ages, posset was common enough to be mentioned in both “Hamlet” and “Macbeth.”

The drink evolved in the sixteenth century, when it called for citrus juice, cream, sugar and other ingredients. For less fortunate households, posset was still composed of milk curdled by inexpensive ale or wine. But for wealthier people, posset could be dressed up with spices and sugar, not to mention higher quality spirits, making it a sippable concoction. The addition of spices and citrus to the drink emphasize its status at the time, and although it was widely known and loved, making posset was considered a splurge, a staple curative that only wealthy households could afford.

By the time it reached the American colonies, posset evolved to become the eggnog we know today: made with eggs that made it thick, sweet and boozy, and more like the version made for richer tastes back in the UK. With cheaper sugar and rum from the Caribbean, eggnog was more affordable to make. It was also a practical drink: The added alcohol made it safer to drink the milk and eggs and it was a smart tactic for keeping those easily spoiled goods around for consumption.

If families had a few egg-laying hens in their backyard and a nearby source of cream, eggnog was possible—at least some of the time. It was also a money maker for local taverns, where drunken revelry once sparked a riot at the US Military Academy in West Point, New York.

Eggnog has always been an American tradition. In fact, both George Washington and Dwight Eisenhower are known for their eggnog recipes—although only Ike’s is confirmed from the source. 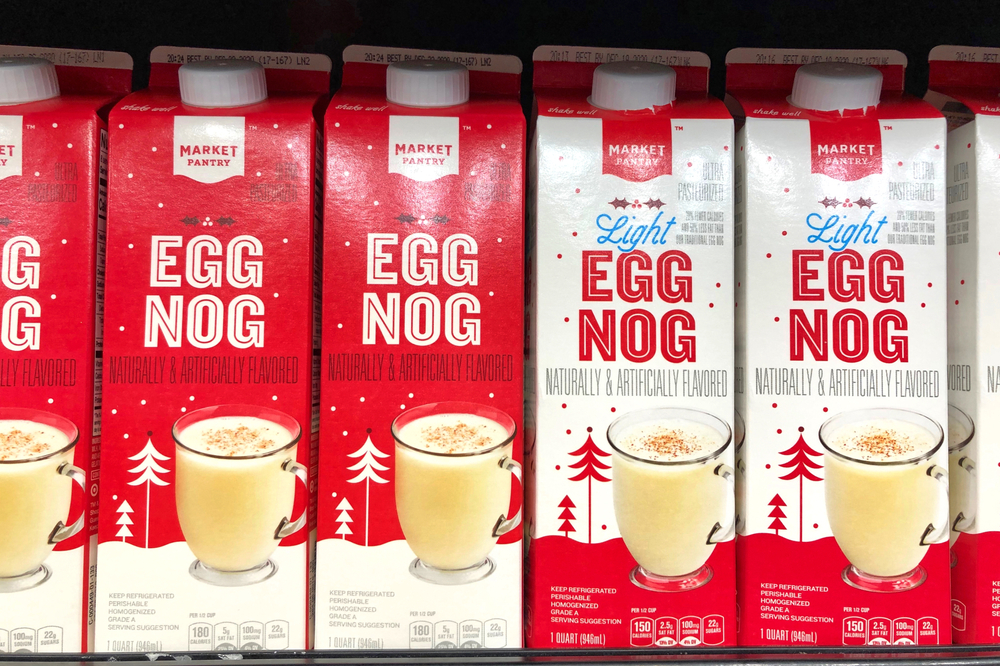 These days, most consumers have never tasted real, fresh eggnog. The old-school, highly alcoholic version of eggnog may have become less popular as technology advanced. Before pasteurization was the standard, adding alcohol to plain milk made it safer to drink, and was sometimes added to dairy to kill harmful bacteria. When you make eggnog with raw eggs, enough alcohol can cure them, which is why some modern recipes direct you to let your alcoholic eggnog sit before consuming it.

By the 1960s, the non-boozy, low-egg variety took over the refrigerated cases of stores. Even today, among non-alcoholic varieties sold in stores, there are two basic types of eggnog available: the thinner, less sweet kind for drinking straight and the sweeter, thicker kind for mixing with the alcohol of your choice.

The store-bought kind of eggnog we see today contains hardly any eggs and is consequently light on flavor. The FDA’s current definition of eggnog requires only one percent egg yolk solids along with a certain level of butterfat and milk products. “Eggnog flavored milk” can contain even less. Considering that a classic recipe for eggnog will set you back a cool dozen eggs, it’s a huge difference. And no amount of golden coloring designed to suggest egg yolks or excess of sweetener can fool a discerning palate.

Americans certainly have a fear of raw eggs, in part due to cautious leadership from the FDA, which has changed its official definition for eggnog several times to accommodate artificial or highly processed substitutes for real eggs, raw or cooked. For example, spray dried eggs are a common ingredient in eggnog bought at the store.

If raw eggs concern you, there are ways to cook your eggnog and eliminate that fear. But it’s also worth noting that you’re more likely to get salmonella from other foods.

Recreating the Eggnog Tradition at Home

As people move to take food production and food security into their hands, more people are raising their own animals. Can homemade eggnog from fresh eggs become a “new” holiday tradition again?

I make it every year from eggs our chickens lay in the yard and I’m passing the tradition on. My daughter eagerly awaits our eggnog session every year. We’ve whisked our eggnog into ice cream, cookies, cake, waffles and more, but mostly just enjoyed sipping it ice cold, dusted with fresh nutmeg from little jars.

And as more people raise backyard chickens and have a bounty of eggs to sell, there are new opportunities to give real, homemade eggnog a try. Of course, you don’t need chickens to get back to the original recipe this holiday season.

If you want to recreate the classic, traditional eggnog taste, what you make at home with real eggs from any source will definitely rival anything you buy at the store. When you’re recreating the version you want yourself, keep a few things in mind.

If you want the old-school version with alcohol in it, you can even use Ike’s recipe or one like it. It seems like a lot of sugar—and it is. But as a mixer for alcohol, the heavy, thick sweetness of the drink works well.

If you prefer the non-alcoholic, drinking version—a far tastier version than the kind you’d get in a carton at the store—that’s just as simple. You follow the same basic recipe, but with less sugar, and use whole milk in place of liquor. 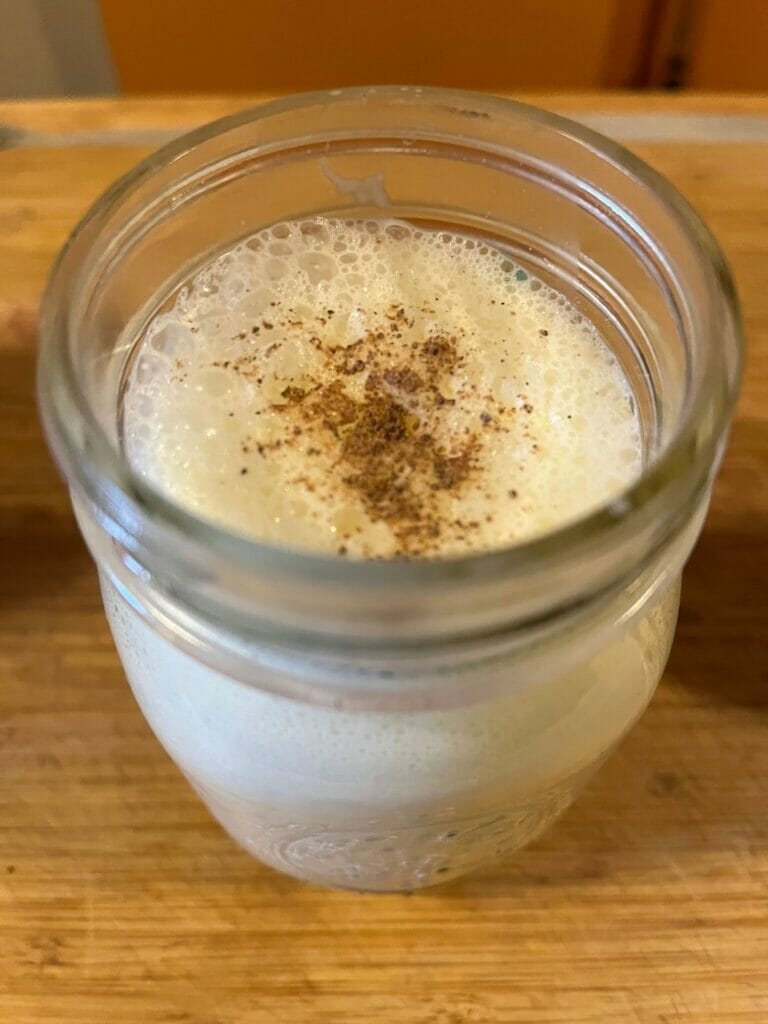 To make the classic version, just follow all of the steps. Or, for the non-alcoholic version, follow steps 1 and 2, and then pour in whole milk alone rather than alcohol during step 3.

1. Using the whisk attachment in a stand mixer or with a hand mixer, whip egg whites and 1 tablespoon sugar on high until they are in shiny peaks. Set aside. Carefully and thoroughly clean and dry your bowl or mixer.

2. Whip egg yolks and sugar in a mixer with the whisk attachment until they’re fluffy and light yellow.

3. Once the yolk and sugar mixture is creamy, turn speed to medium-low and slowly add in alcohol and whole milk, or just whole milk. You want to add just a little at a time over about 10 minutes until it’s very well incorporated and creamy from mixing.

5. Slowly mix the cream into the eggnog mixture until thoroughly blended.

I like to make about three quarters of it with just milk so everyone can drink it—and I hold the remaining mixture back to make a very boozy version for the adults.

We create an egg separation assembly line with a few bowls, and then we mix it all together with the milk to get the creamy delight we’ve been waiting for. It’s worth using a fresh nutmeg on a microplane for this one, trust me. Even without alcohol, the eggnog will keep in the refrigerator for several days, if it lasts that long. With substantial amounts of alcohol in it like the old recipes call for, it will last for weeks. You’ll always remember doing it.

I just tried the recipe. It’s amazing! I never liked store bought eggnog but I tried this and love it.
And I used fresh duck eggs from my farm. Can’t beat that!

Thank you for the recipe and history lesson!