It’s a Great Time to Find a Local Egg Dealer

Last year’s obsession with raising chicks has led to a boom in backyard egg sellers. 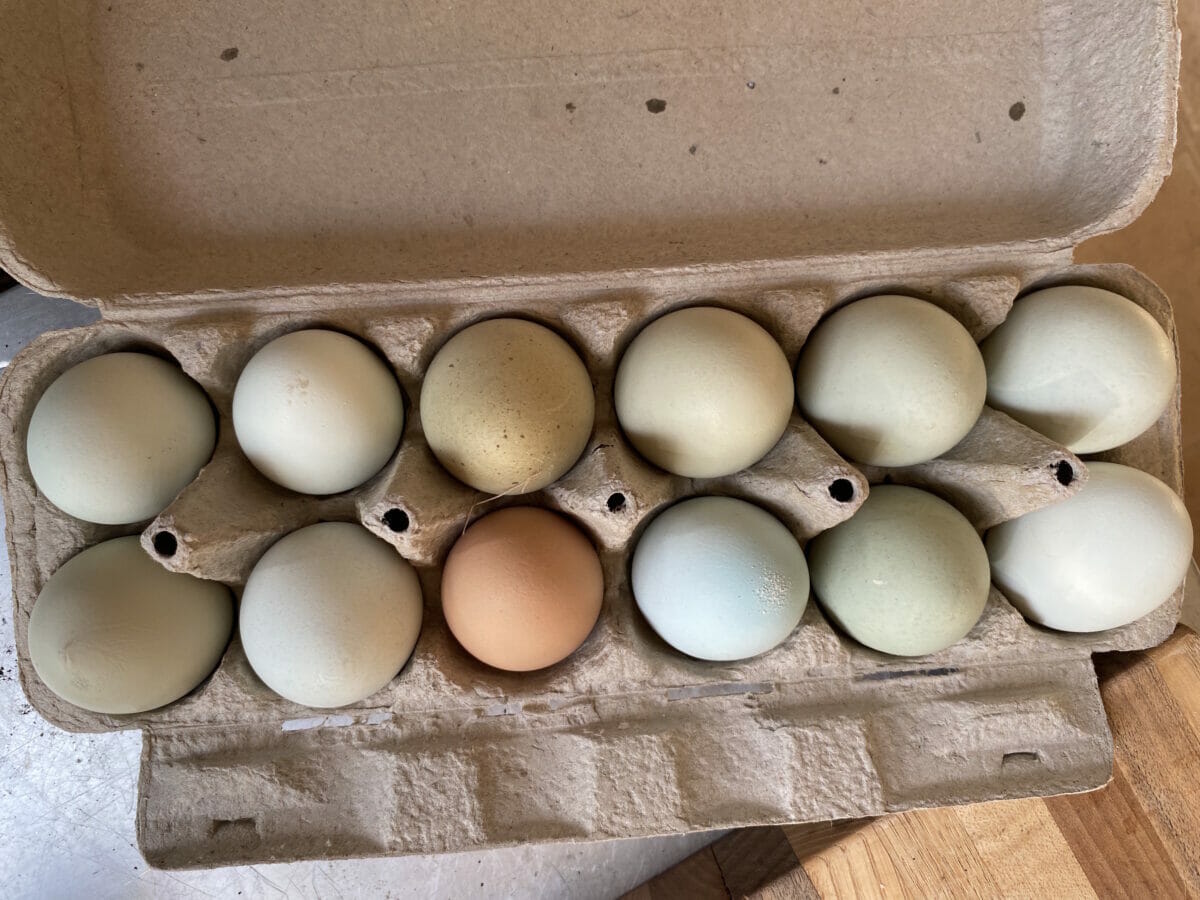 First came the chickens, then came the eggs.

When Helen Baldus acquired her first two hens, named Honey and Petunia, in the fall of 2019, she didn’t plan to raise them for their eggs. At the time, she was splitting her week between her Brooklyn apartment and her partner Harrison’s small farm in Pennsylvania, where the chickens lived. But then the pandemic hit and Baldus fled the city to spend her lockdown at the farm. A few months later, she made the move permanent.

The couple now cares for 20 hens and two roosters. They ordered many of them last year as live chicks through a hatchery and picked them up at the local post office. Others hatched, unplanned, on the farm. “Unbeknownst to us, one of the hens got broody and started laying her eggs in the upper barn and was sitting on them,” says Baldus, who had to find new homes for the young roosters in the bunch to keep the recommended ratio of 10 hens for every one rooster.

The hens now lay around 100 eggs per week, far more than the small household can eat. So they started selling their beautiful blue-hued eggs for $5 a dozen. A local health food store buys some, but the couple also sells to neighbors and friends, as well as to the parents of the kids on the soccer team Harrison coaches. “We also gift a lot of eggs,” says Baldus. “A dozen eggs is our new hostess gift.”

At the beginning of the COVID-19 pandemic last year, Americans panic-bought everything from toilet paper and hand sanitizer to flour and yeast. They even stocked up on baby chickens, which quickly led to a live chick shortage. Many of those buyers were first-timers who decided to raise chickens in their backyard either out of boredom or to ensure a steady food source in the months ahead.

Once hens reach about six months old, they start laying eggs. No roosters are required, so even if you have an all-female flock, you’ll still get (unfertilized) eggs. So it should come as no surprise that last year’s boom in hobby farms has led to a rise in community egg sellers in urban and suburban areas, where few may have existed before.

Laws regulating backyard chicken coops (and selling the eggs that come from them) vary in different states and municipalities. In some, chicken coops are required to be a certain distance from neighbors and the health department makes surprise inspection visits. Others limit the number of eggs you can sell per year. In general, certifications or licenses aren’t required to raise and sell backyard chicken eggs, but you must include certain information about them when doing so, such as the name of the seller, address, date the eggs were laid and their classification (such as Grade AA, A, B or unclassified). (Check with your town or with the National Egg Regulatory Officials about your state’s regulations.)

In the Canadian province of British Columbia, Tina Rahn launched a website called Egg Finder to help support the egg sellers in her community. “I wanted to spread the love and joy of fresh eggs,” says Rahn. The site now has close to 90 people who sell their eggs—including free-range, pasture-raised and organic offerings—through it. “I was surprised by how many people sell eggs just within 20 minutes of me.”

New egg dealers also advertise their bounty on flyers posted on telephone poles, at roadside setups, through word of mouth, as well as on Facebook, Local Harvest and Nextdoor, a neighborhood app. That’s where Connecticut resident Layla Schlack found her egg dealer, who she’s purchased dozens of fresh eggs from, despite never meeting her in person.

Schlack picks up the eggs from a cooler at the end of the seller’s driveway, following the honor system by leaving cash—$4 for a dozen or $6 for 18 eggs—in a cup for payment. She says the pandemic has made her focus on how much food she can buy or grow locally after seeing how fragile and exploitative food supply chains are. “Being able to get an affordable, relatively shelf stable protein like eggs through these informal channels makes me feel like…it wouldn’t be that hard to wean myself off of nationally distributed products,” says Schlack, who recently added vegetable gardening to her list of hobbies.

In a nearby town, Ellen O’Donnell found her egg dealer on the tennis court, where she overheard another player raving about her tennis partner’s eggs. “In a cheerful mood, rather charmed by his local egg pride, I asked if I could buy a dozen. He was delighted and I stopped at his car after tennis and slipped him seven dollars for a dozen,” she says. “I joked that it felt like a drug deal.”

Many backyard chicken hobbyists aren’t in it for the money. Selling the hens’ eggs is just a way to subsidize a productive flock and help cover the costs of feed. Being able to bond with neighbors over the eggs’ golden orange yolks is an added bonus. “They taste good! Fresh, rich, no complaints there,” says Schlack.

Eggs are one of the best nutritional deals around. Eat more eggs.

Dear All. Your June 22nd Nice article about “How to find an Egg Dealer” was interesting. Especially for a Cuban reader, presently living in Cuba, A country suffering a “US Trade Embargo” plus the devastating effects of the COVID-19 Pandemic. In Cuba, Eggs have become expensive and unavailable commodities in the Island. Therefore, tips about how to begin a Small Yard farm has been very useful. Thank you.
M.A.M. Holguin. Eastern Cuba.

I miss my 5 gorgeous and generous girls so much. Everyone admired their shiny feathers, easy good-natured disposition, and just overall healthy appearance. Their eggs were prize winners in taste, texture, and size. I couldn’t cheapen their value by selling the eggs for a few dollars. I had enough to freely share with my neighbors. We all miss those lovely hens.