What to Do With an Abundance of Peppers - Modern Farmer
Food & Drink, How-To

What to Do With an Abundance of Peppers

Six ways to preserve your banner crop for year-round enjoyment. 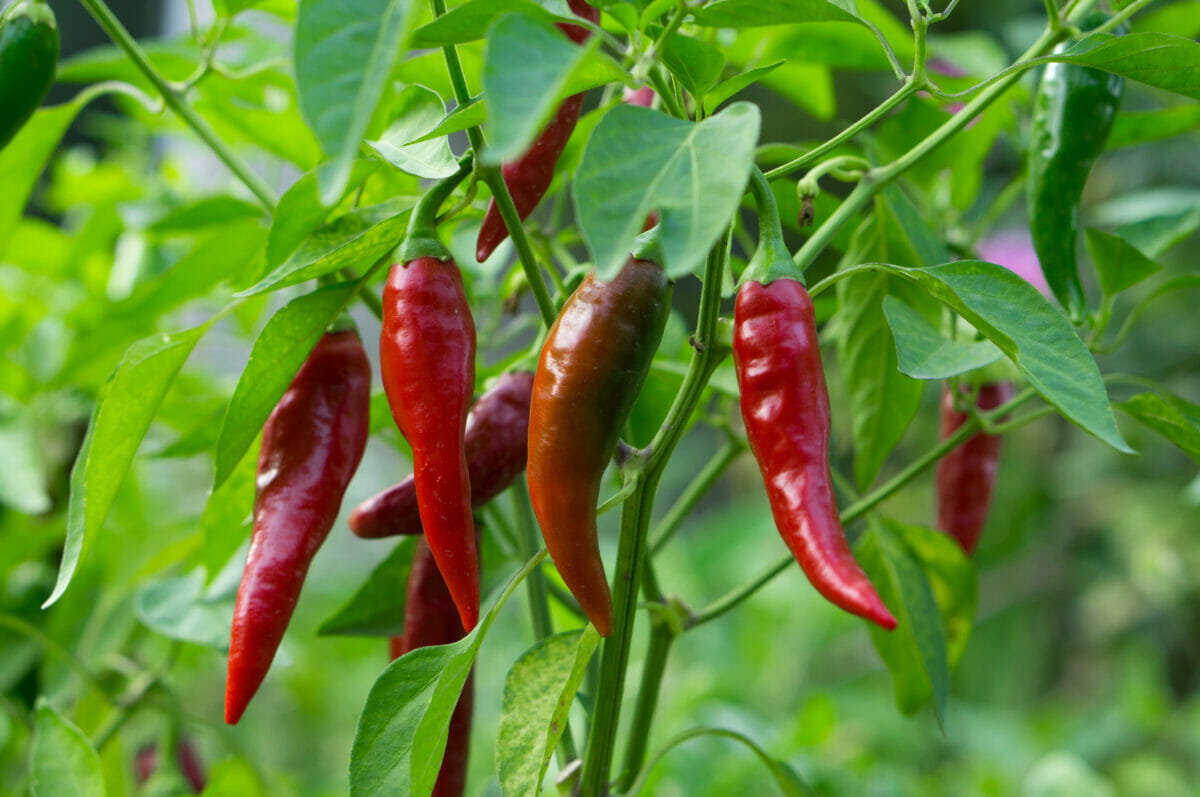 We’ve reached that point in late summer when my pepper plants are producing more than I can keep up with. There are only so many stuffed peppers, fajitas and stir fries one can eat. If your garden is also pumping out a bountiful amount of peppers right now, here are six different ways to preserve them to enjoy during a later season.

Remember: If you’re working with hot peppers, be careful when handling them. Wear gloves to protect your hands from the capsaicin (the compound that gives hot peppers their spicy kick) and never rub your eyes! 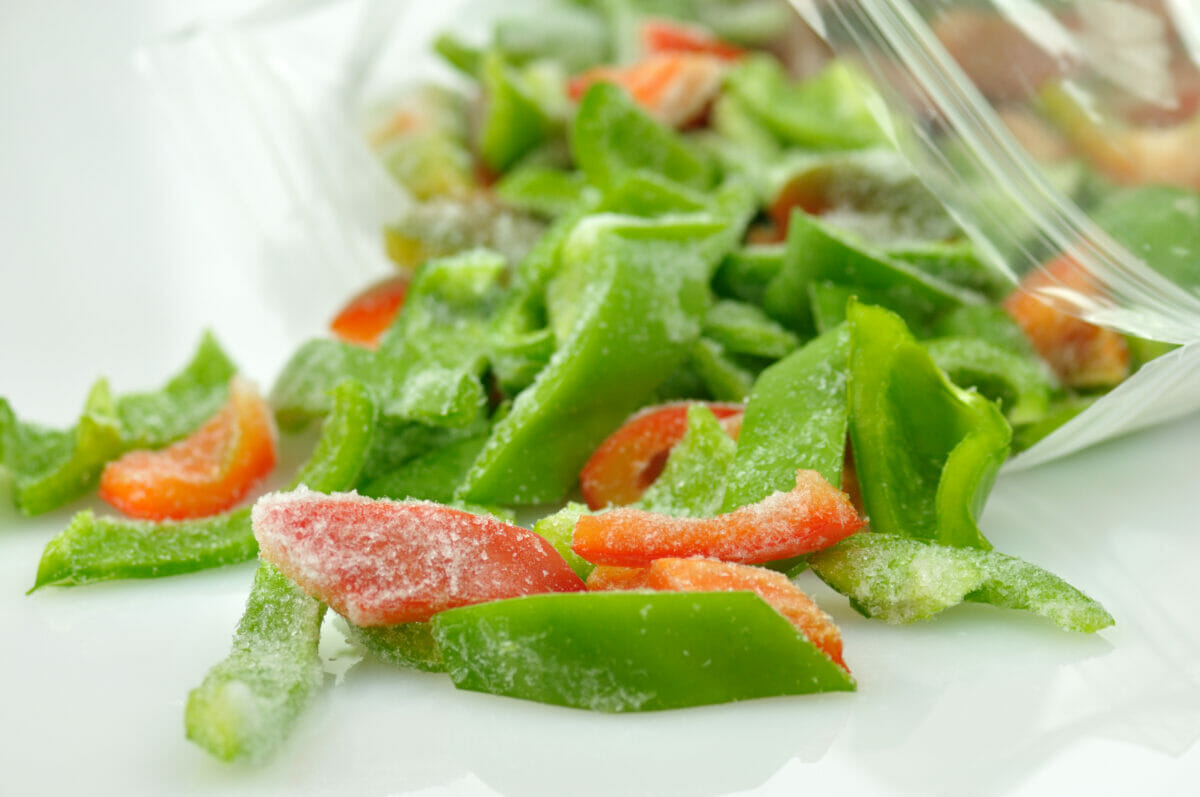 Peppers freeze exceptionally well. For sweet and bell peppers, remove the stems, seeds and membranes. Chop them up as you’d like to cook them later—in strips or diced—and spread out on a tray so they aren’t touching each other. Place the tray in the freezer until the pieces are firm, then transfer them to a freezer-safe storage bag. Smaller, hotter peppers such as  jalapenos, serranos, habaneros and Bird’s eye chili peppers are better off frozen whole. 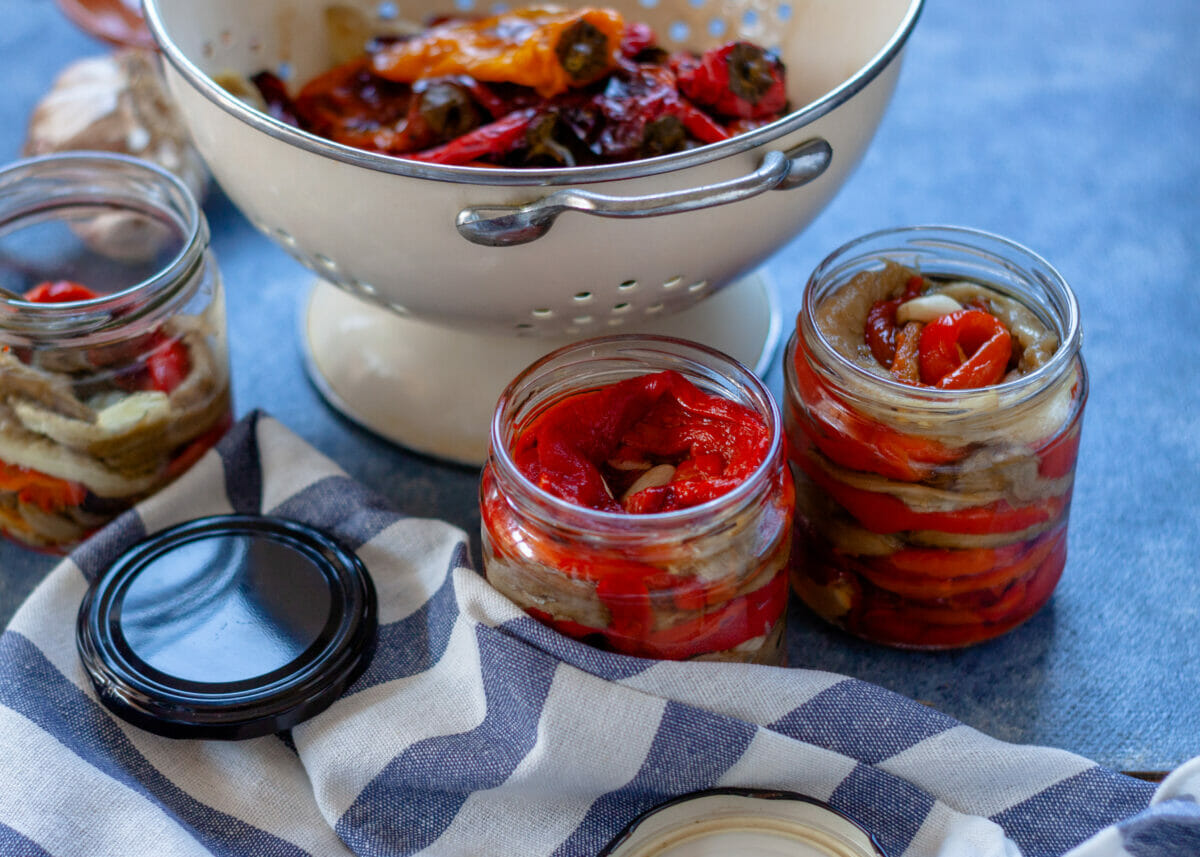 If you’ve preserved peppers before, chances are that’s been by canning them. Jarred roasted red peppers are good to have on hand throughout the year, whether to nibble on by themselves or to add to a sandwich or pasta dish. To make your own, allow the red bell peppers to fully ripen. Char them in a broiler or over a flame, remove the blackened skin and seeds. Following these canning directions, jar with vinegar, lemon juice and an olive oil marinade. You can also puree the peppers into a spread before canning. 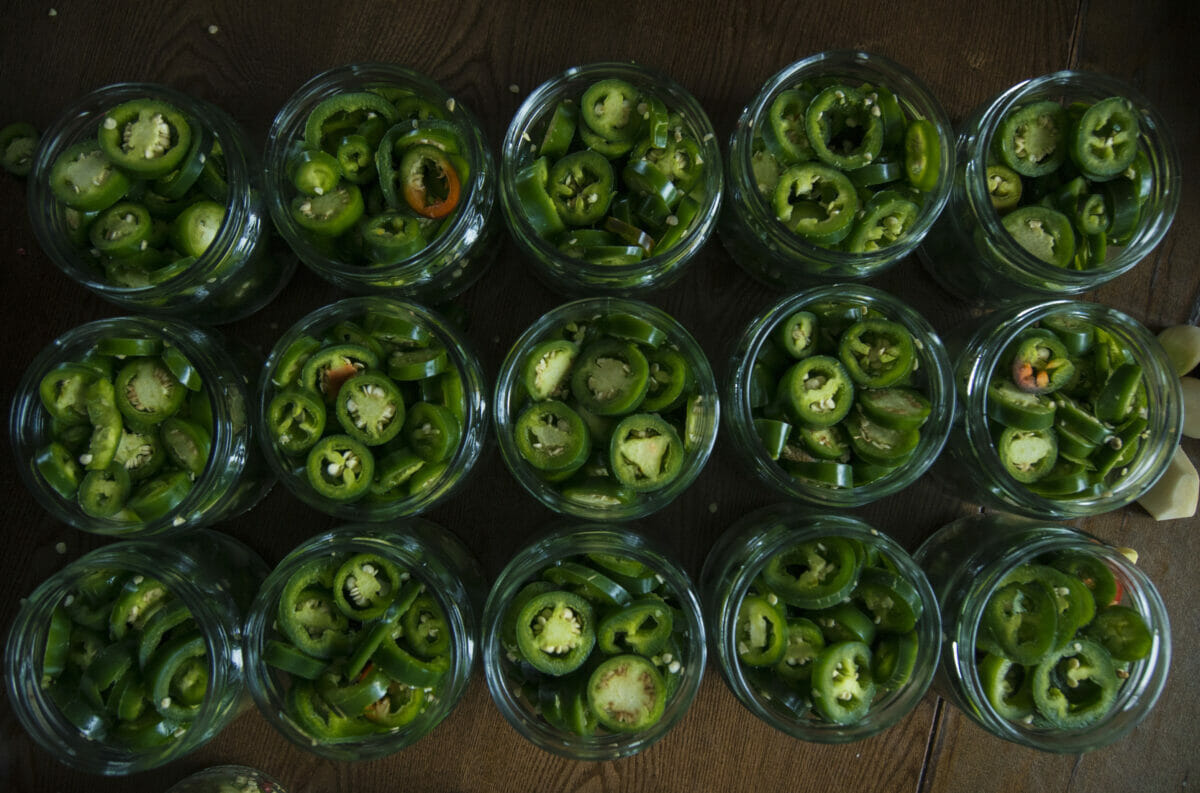 One great way to preserve the color and flavor of spicy peppers is to pickle them. If you like your peppers hot, leave them whole or simply slice them in half. If you want to tone down their heat, slice them up and remove the seeds. You can also pickle a variety of different peppers—bell peppers, banana peppers, jalapeño or habanero peppers—together. Just be aware that adding any hot peppers to the mix will turn all the peppers in the jar spicy once you add the brine, so add them sparingly. Follow the steps in this pickling guide, adding the spices of your choice—such as onion, garlic cloves, peppercorns, mustard seeds, dill seeds, sesame seeds or bay leaves—to each batch. 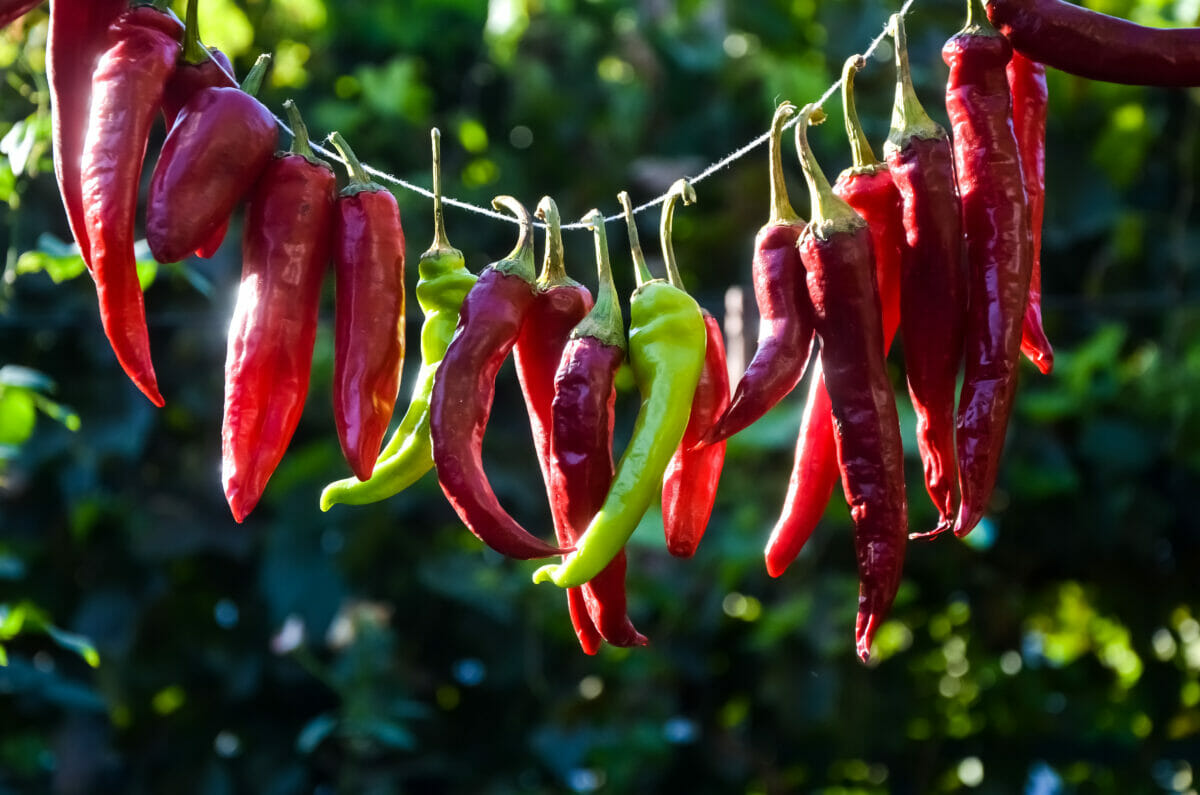 Dehydrating peppers is a good and easy way to store them for months. Chili peppers such as poblano, red and green jalapeños, paprika and chile de Arbol peppers dry well. Once dried, store in an airtight container away from sunlight. Dried peppers can be ground into powders or rehydrated to use in sauces, soups, stews or even added to a pot when boil ing dried beans. Follow one of these three drying methods.

— If you live in a hot climate with day temperatures above 85 degrees Fahrenheit, thread the peppers onto a string and hang the peppers to dry in an area with good air flow and sunshine. It should take three to four  weeks until they’re fully dried.

— If you live in a more humid climate, using a food dehydrator is the quickest and easiest way to dry peppers. Spread the peppers out on the screens and set the temperature between 125 and 135 degrees Fahrenheit. It can take between four and 12 hours for them to dry completely, depending on the peppers’ size.

— If you live in a humid climate and don’t have a dehydrator, don’t fret. You can also dry peppers in the oven at a very low temperature. Spread the peppers out on baking sheets and place in an oven preheated to 150 degrees Fahrenheit. Leave the oven door open a crack to allow moisture to escape. Check on the peppers every 30 minutes until they are dry, usually within one to two hours. 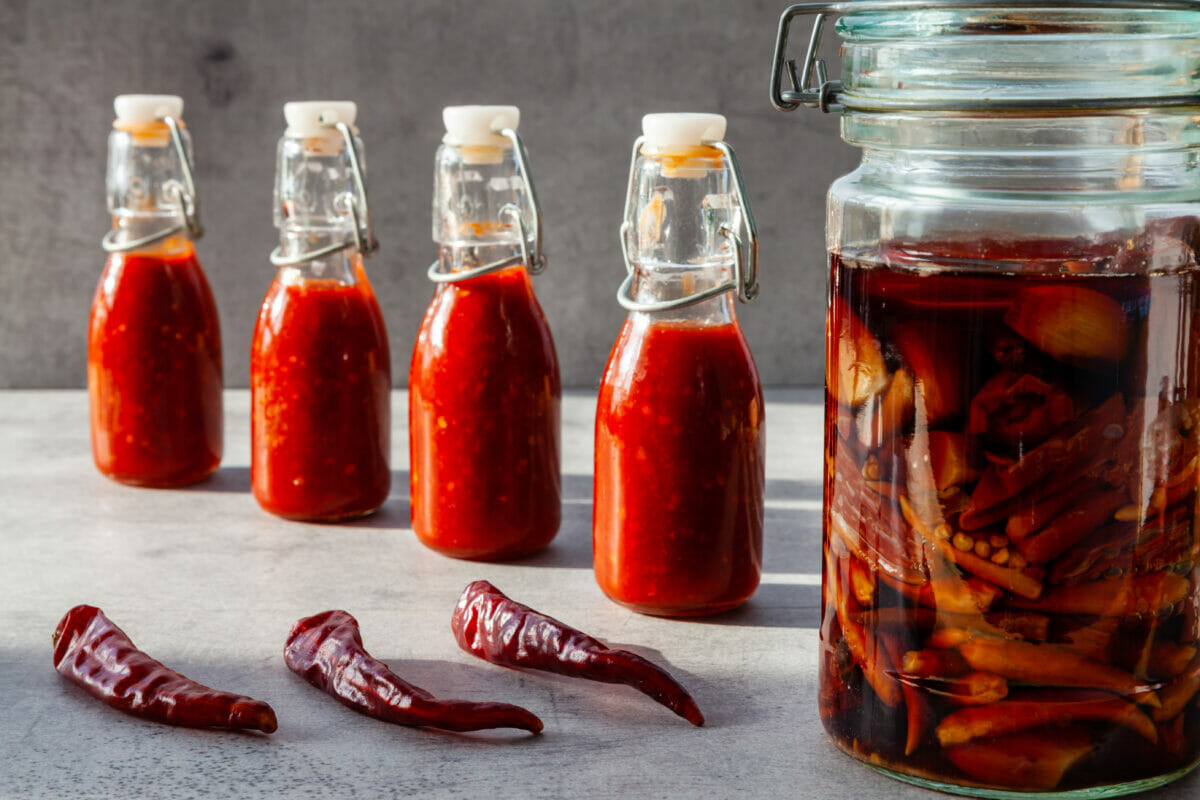 Ferment Them Into Hot Sauce

To make a fermented hot sauce, fill a two-quart jar with any type(s) of fresh hot chilies, garlic cloves and onion or thinly sliced carrot (both optional). To make a milder version, you can use bell peppers to temper the hot chilis. Following this fermentation guide, make a saltwater brine and pour over the chili mixture, pushing them down so they are completely covered. Use a fermentation weight to keep everything submerged, then place a lid on loosely to keep bugs out while leaving room for fermentation gases to escape. Store in a dark, cool place for three to seven days, checking on it daily to make sure there are bubbles forming.

When you see a cloudy brine has formed, that’s the sign you have a safe and successful ferment. Strain the brine and save it. Puree your chili mixture in a blender with a cup of the brine until smooth. Add any spices or herbs you’d like at this step, then add the sauce to a squeeze bottle and store in your fridge. It’s important to make sure your hot sauce container has some way for air to escape, because the fermented hot sauce is alive and will continue creating bubbles. If you store it in an airtight glass jar, it will explode. 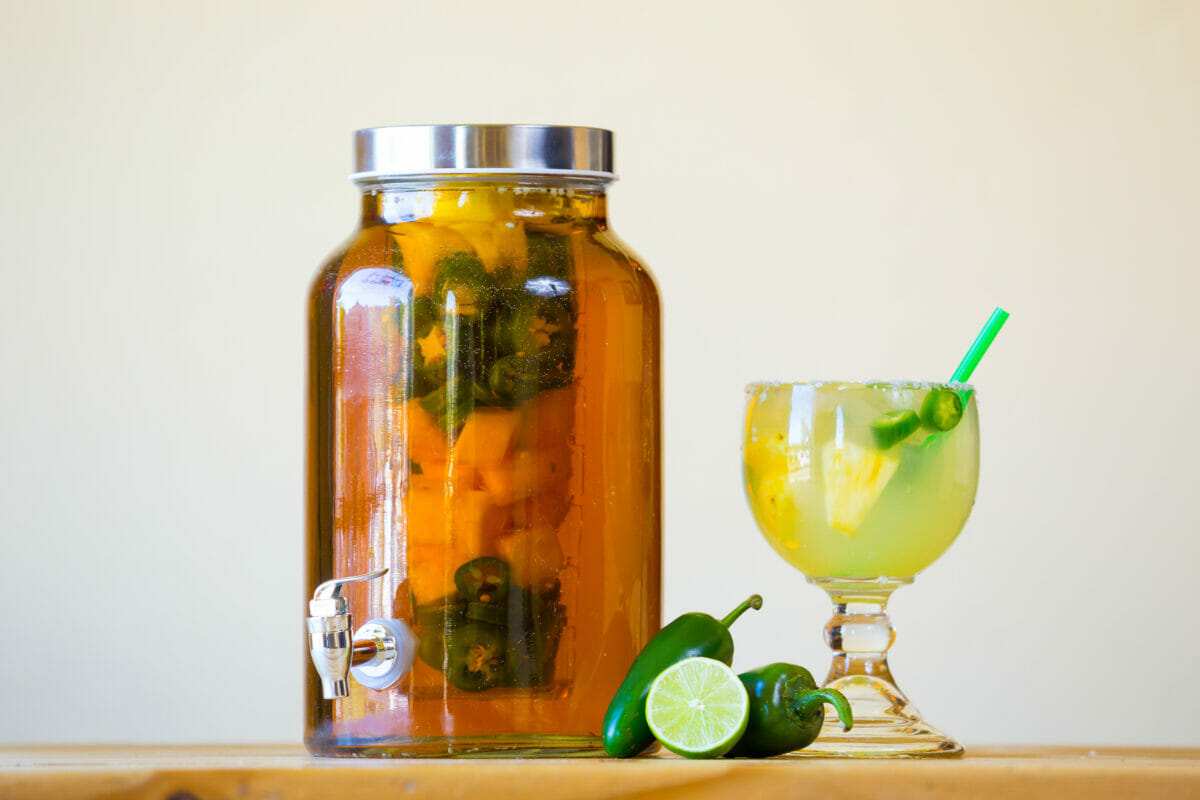 Infuse Them Into Spirits

Want to spice up the cocktails you’re making at home? An easy way to do this is by adding spicy peppers to different spirits to infuse them with their flavor. Start by adding slices of fresh jalapeño to vodka or an agave-based spirit such as tequila, keeping the seeds intact, and letting them soak for about 24 hours. Once you have the process down, experiment with different pepper varieties and spirits until you find a winning combination.

I love freezing my peppers, I always keep a big bag that I harvest at the end of summer so I can use my own throughout the year, until the next batch is drive