Can Backyard Chickens or Gardens Supply a Household’s Protein Needs?

A new study looks at backyards as a protein factory. 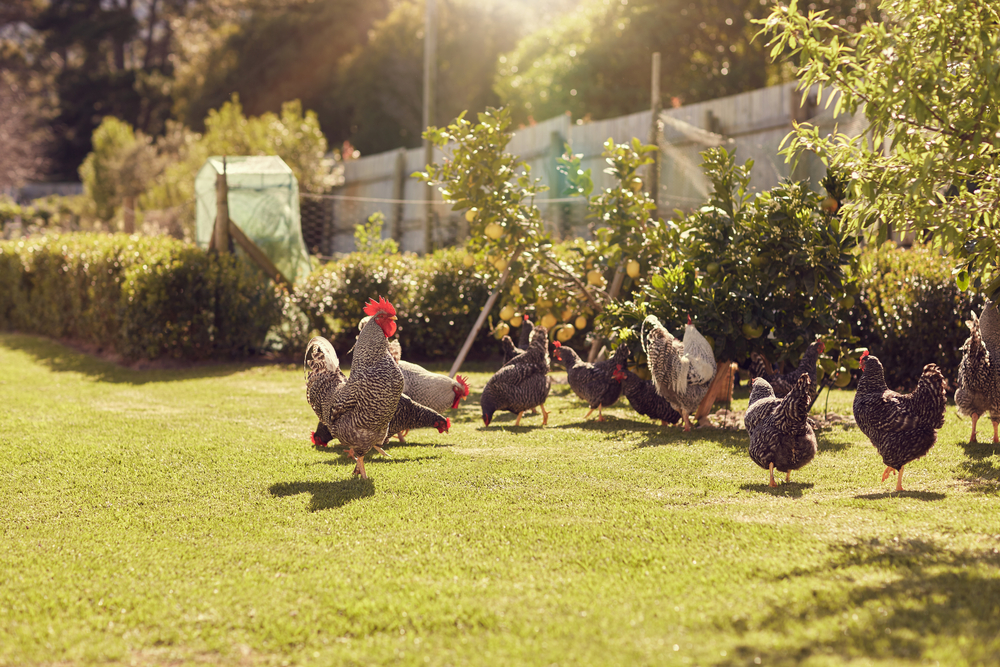 Backyard gardens in the United States are most often supplemental to a household’s diet, and, sometimes, they’re more of a hobby than even that.

But given the food supply disruptions and uncertainties brought about by the pandemic, what if backyard gardens could go a step further and provide a significant amount of protein, in addition to tomatoes and cucumbers? A new study from Michigan Tech and the University of Alaska at Fairbanks looks at possible ways to not only supplement but supply in large part a household’s protein needs, just with what can be raised (or grown) in a backyard.

The study examined the feasibility of three different types of backyard animal raising (pasture-raised rabbits, pellet-fed rabbits and pellet-fed chickens) as well as soybeans, trying to find how much protein a typical American yard could produce. The actual size of the yard is very important in any of these calculations; the researchers used a state-by-state average yard size, which ranged from about 0.2 acres to 0.25 acres, and omitted those with no private land at all (such as people who live in apartments).

They also analyzed the soil quality and ability to grow rabbit pasture food, such as hay and alfalfa, which varied considerably by state, as well as the space needed to raise caged rabbits or chickens that would be fed pellets. All of that went into calculations to find out how many rabbits or chickens could be raised on a typical American yard.

Soybeans are easier, in some ways: They require fewer inputs and much less land than animals do. They also have roughly half the protein content by weight of chickens, so the researchers took that into consideration.

Using National Institutes of Health figures for protein requirements—56 grams per day for sedentary men and 46g per day for sedentary women, for an average of 51g per day—the researchers attempted to find out how much of a household’s annual protein needs could be met by turning their backyards into a productive mini-farm. The results varied considerably based on all kinds of factors; pasture-raising rabbits, especially, requires certain kinds of land.

Depending on the specifics—and ignoring some problematic variables such as climate—backyard animals could technically provide enough protein for a family of two to four, but not necessarily easily. You’d have to raise 52 chickens (mostly for their eggs) and 107 rabbits in a single year to meet that mark, which may not be entirely practical. Soybeans, despite their lower protein content, were fully able to meet a family’s protein needs.

Of course, none of this is really to suggest that anyone could, or should, raise 107 rabbits in a quarter-acre suburban backyard every year. The cost of constructing and operating a backyard farm like this would be, by the researchers’ own calculations, significantly more expensive than buying the equivalent food at the grocery store, not to mention the hours of labor that it would require. But it does get at one important point: American backyards, with their classic green lawn, aren’t doing anything for us. Maybe they should be.

It is easy to raise chickens for meat and/eggs in a chicken tractor. I have been doing it for years on my lawn. I typically raise 25 in a 5x 10 foot chicken tractor for meat. Raise two batches a year and you are at 50 in no time for your freezer. Chicken tractors can be built from all kinds of cheap materials. Mine have fence rail bottoms and gray plastic emt hoops with polycarbonate panels screwed onto the hoops and hardware cloth on the ends where the door is. I raise rabbits on the north side of my house.… Read more »