Why Citizen Scientists Are Working to Cultivate New Apple Varieties

Across the country, cider makers and pome enthusiasts are partaking in seedling projects to diversify the apple kingdom. 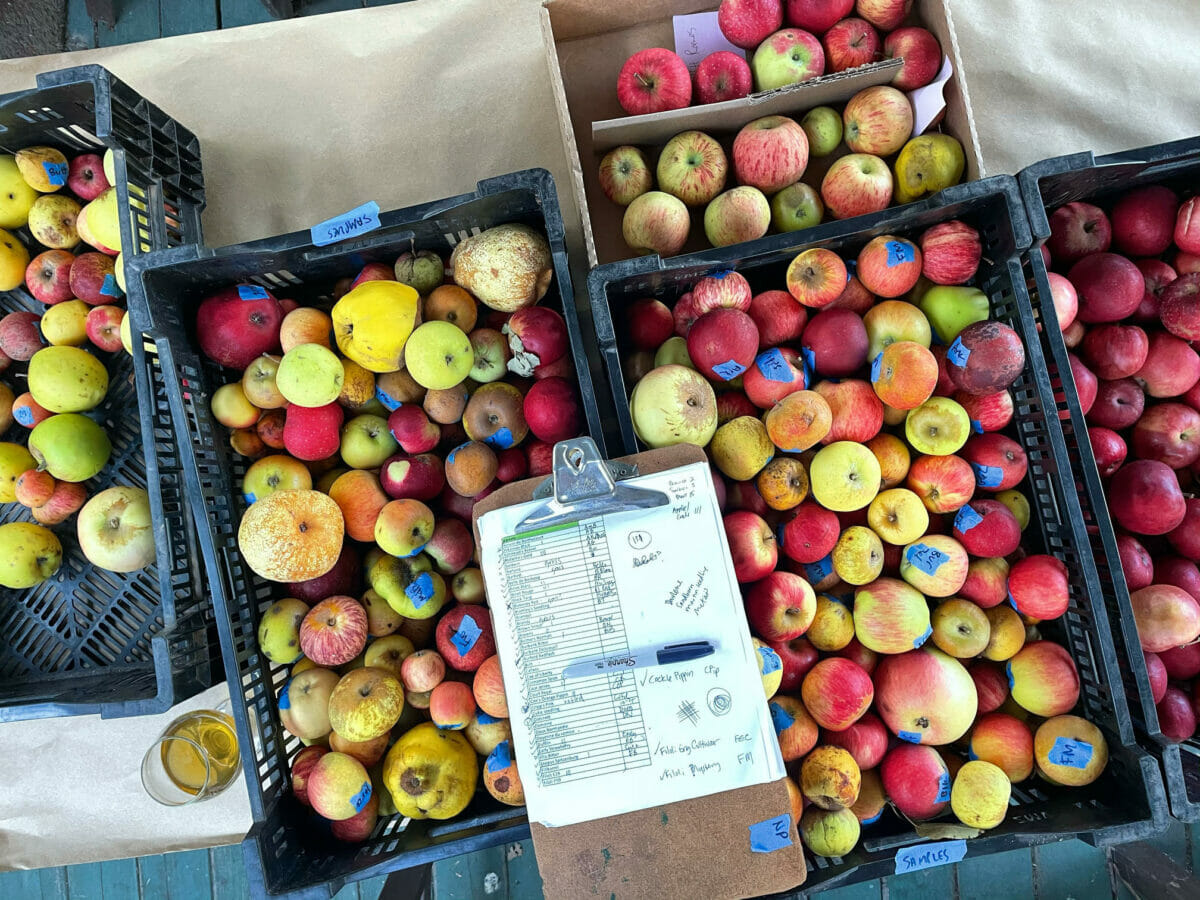 Ellen Cavalli has a modest apple-hoarding problem. On the back porch of her home, located on the Sonoma County farm where she makes cider with her husband, sits a large refrigerator filled with her collection of more than 100 different kinds of apples and crab apples—which have names like Arkansas Black, Dabinett, Hewe’s Virginia, Rhode Island Greening and Porter’s Perfection—as well as a small handful of pears and quince.

These are not fruits with which Cavalli plans to bake a pie or churn into apple sauce. Many are bittersweet and bittersharp cider apples that are generally too tart and tannic for (enjoyable) human consumption. And she’s not keeping them in cold storage just to sell at a later date. Cavalli’s beloved pome fruits are part of her ongoing seedling project, a self-guided experiment through which she wishes to discover new varieties that her husband, Scott Heath, might some day blend into one of their Tilted Shed Ciderworks bottlings.

Pome fruits such as apples, pears and quince are heterozygous, meaning they do not grow true to seed. If planted successfully, each seed from an apple will yield a tree that grows fruit different from its parents. Apples in particular have an incredibly complex genetic code, with approximately 57,000 genes—far more genes than the human genome’s estimated 30,000 genes. Of the 7,500 known apple cultivars in the world, only 2,500 are grown in the United States. Some of the ones we know best, such as the Honeycrisp or Fuji, were developed through a modern scientific breeding process, during which researchers attempt to achieve favorable characteristics such as tastiness, crispness and resistance to diseases.

Before plant breeders intentionally crossed different varieties in such fast, efficient ways, apples naturally spawned new types over many years. The apple fell, the seed germinated and, somehow, it survived and grew. The evidence can be seen across New England, a region prized for its abundance of wild apple trees, where cider makers forage for wild apples that have grown without conscious human intervention.

Now, a growing number of citizen scientists in other parts of the country want to replicate the experience elsewhere. “I couldn’t have that experience that our East Coast brethren were having—going out and finding something that’s totally new and grew there, originated there, just by happenstance,” says Cavalli. That’s not to say there are no wild apples or seedlings growing along a fence side or in historic orchards in California, but nothing at the scale of what’s available on the East Coast.

Cavalli started her project in 2016, taking seeds from known varieties with desirable traits, such as ones with pink- or red-hued flesh, and planting them. If the seedlings germinate and start growing, she moves them to a part of her farm where sheep can’t nibble away at them, and steps in to nurse and water them to keep them from dying off in a drought. “I accept that there’s intervention,” she says. Some of her initial seedlings are now fairly tall trees, expected to fruit for the first time in the next year.

Unlike the Lost Apple Project, which seeks to recover lost or nearly extinct apple varieties, Cavalli and other like-minded orchardists aim to find future ones that may be more resilient to climate change and suitable to their specific land.

In Sheridan, Oregon, Kim Hamblin makes cider with her husband Dan Rinke at a home farm under their Art  + Science Cider & Wine label. Over the past five years, Hamblin has also embarked on her own pome fruit seedling project. She takes a more natural approach, tossing pressed apple mash onto the compost pile at the home farm, some of which gets nibbled on by elk and other animals, which sometimes even expel the seeds as they pass through. If she sees any seedlings coming up through the compost pile, she digs them up and moves them to the orchards to see if they’ll take.

There’s no monetary incentive for Hamblin. “I don’t need to find something to commercially sell,” she says. “I’m just geeking out.” Although she continues to forage for apples, pear and quince, she says it isn’t a sustainable way to source fruit as the cider movement evolves. As more consumers and producers grow interested in cider made from foraged fruit, the less there is available for all. For Hamblin, the seedling project is a way to encourage apple diversity at the farm level. She’s also noticed that trees grown from seedling, compared to those grafted onto rootstock, aren’t as affected by the summer droughts now typical in Oregon. “They tap down roots and are more resilient because of it,” she says.

The process from seed to a tree’s first fruiting can take up to five years. Hamblin is just starting to see her seedling work come to fruition. But other citizen scientists elsewhere are further along in their apple-breeding projects. For more than a decade, Steven Edholm has embarked on various homesteading and plant-breeding projects on his 40 acres of land in northern California. He shares informational videos to his popular SkillCult YouTube channel. One of his major interests is sharing ways citizen plant breeders and home gardeners can cultivate new varieties of apples. “We narrow diversity and our choices by accepting the industrial food model as our only connection with food,” he says. “I don’t think it benefits us to leave apples to that paradigm only.”

In 2015, Edholm named the first apple he grew from seed. It’s called the Bite Me!, a seedling apple he raised from an open-pollinated Wickson apple seed. Since then, he’s introduced more new apple varieties, such as the Cherub and Black Strawberry, and sent scions (young shoots) out to other growers so they can be tested in orchards in other parts of the world.

Any home gardener with enough land and patience can, theoretically, come across and nurture a new kind of apple tree. Simply follow the age-old model: Plant the seeds and see what happens.

Apple seeds (“pips” over here) may contain hydrogen cyanide, like the kernels of many fruits do. So, disposal of seed-rich waste from mashing etc should be done judiciously, where animals cannot consume a toxic dose. Perhaps you are already aware, but many in the UK will not be. Countryside hedges, maybe?, are more of a feature in the UK than the USA. We see hedges as an important wildlife resource. Crab apples in hedges are common, but aiming at more diversity in flowering time etc, I have started taking cuttings of uncommon apple varieties. These, of course, propagate true to… Read more »

Oh! How I MISS the apple variously known as Newton, Newtown, and Newtown Pippin. Used to get them from a roadside truck seller who had a wee orchard (out in WA state; now, in GA — no luck findin’ ’em anywhere!) BEST apple ever! You bite it and it bites back! Sharp but not bitter. YUM!

Popular
Could Dissolvable Cranberry Film Replace Plastic Packaging Someday?Emily Baron Cadloff
Alaskan Salmon Face a Stream of New MinesBecki Robins
7 Smokable Plants You Can Grow That Aren’t MarijuanaBrian Barth
Why Don’t We Eat Turkey Eggs?Dan Nosowitz
Goat Sex: Everything You Wanted to Know But Were Afraid to AskAndrew Amelinckx
Explore Modern Farmer
Related
Animals, MTMF
Meet the Maine Teenager-Turned-Landscaper Thanks to Grazing GoatsBridget Shirvell
Animals, Food & Drink, Lifestyle
The Great (Sticker Shock) ThanksgivingLindsay Campbell
Labor, Politics
For Young Farmers, Land Access Will Make or Break the 2023 Farm...Emily Baron Cadloff
Environment, Food & Drink, Water
Egg Whites Could be the Key to Cleaning Our OceansShea Swenson
wpDiscuz
We use cookies on our website to give you the most relevant experience by remembering your preferences and repeat visits. By clicking “Accept”, you consent to the use of ALL the cookies.
Cookie settings ACCEPT
Privacy & Cookies Policy