Why Apple Detectives Are Tracking Down Lost Varieties

Apples offer possibilities for the future by bridging our past and present.

The phrase “lost and found” is being imbued with fresh meaning thanks to the Lost Apple Project.

Since 2014, the nonprofit organization has found 23 lost or nearly extinct apple varieties. At least 17,000 named varieties were once grown here after early colonists brought apples to America; today, there are just 5,000. The group seeks to identify and preserve heritage apple trees planted before 1920 in the Pacific Northwest.

“The history these old apple trees have is just incredible,” says Dave Benscoter, a former FBI agent and IRS investigator, who runs the Lost Apple Project with EJ Brandt.

Apple hunting is painstaking and time intensive. In addition to Benscoter and Brandt scouring nursery ledgers, plat maps, county fair records and the internet for potential leads, they received 600 tips last year alone. Each fall, they send 200 sample bags of found varieties to the Temperate Orchard Conservancy in Oregon for identification. The group offers grafting classes and sells trees to cover costs.

Since Benscoter started the project, he says he’s gained a deeper understanding of how difficult life was back in the early days after apples were introduced to America. “The truth of the matter is these apples saved [the] lives of pioneers,” he says. “The apple was by far the single most important thing you could grow; it had so many uses.” Homesteaders needed summer and fall apples. “Each apple had a specific purpose,” he says. “One was really good for drying, another for canning.” Sugar was produced by cooking down really sweet apples.

There were particular varieties of apples that ripen in October, such as Ben Davis apples, that people grew because they kept best. These varieties didn’t taste good until the spring, says Benscoter, when they were the only fresh fruit people would have. Hogs or horses gobbled up rotten ones. 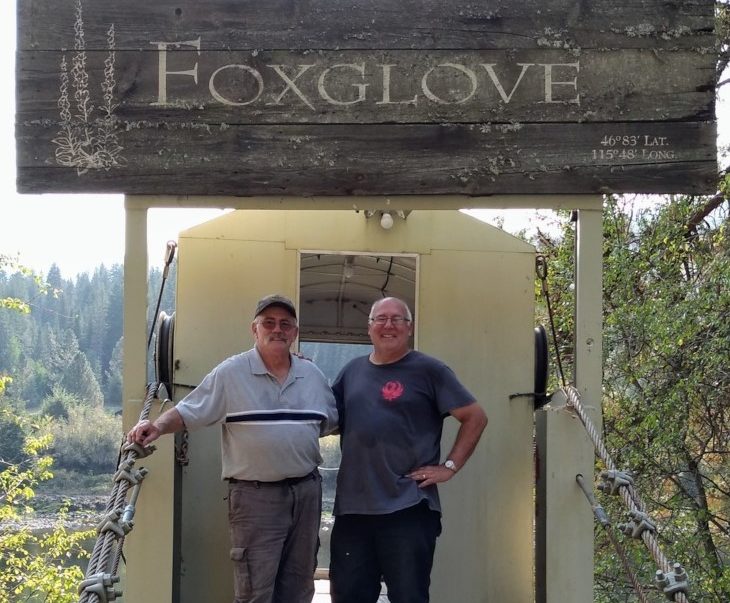 E.J. Brandt and David Benscoter prepare to ride a 200 yard tram across the Clearwater River in Idaho to look at some orchards believed to be planted by settlers. Photo courtesy of the Lost Apple Project

The project is a vivid reminder that there used to be a greater variety of lettuces, peas and the like available, says mycologist Melissa Flora, who runs Lost Apple Project’s Michigan arm, which formed earlier this year.  She grows heirloom vegetables in her garden, often from seeds she’s saved or swapped. “We’ve become so reliant on grocery store chains to tell us what we need to eat. To me, that’s just crazy,” she says.

Some lost apples don’t taste good, but are important for historical reasons and because they can be used to breed other apples, says Benscoter. In 2018, the Lost Apple Project re-discovered the Excelsior, the first apple bred in the United States. Benscoter says the project has botanical and plant-breeding value because some of the apples it is finding have characteristics that are very favorable. The Goldridge, which the project found in 2019, is not susceptible to a disease called apple scab.

Ben Gutierrez, the curator of the USDA’s National Apple Collection, says that the project is exciting because we don’t fully know the potential of future finds. “Genetic diversity is part of sustainability,” he explains. The more apples that the project rediscovers, the more there is to learn about which apples might grow better in various climates and conditions.

“Each apple discovered carries a legacy, interesting genetics, and a unique story,” Gutierrez says. “Like people, every apple is unique. Each helps us tell that story a little bit better so we can understand the genetic composition and where we can go in the future.” 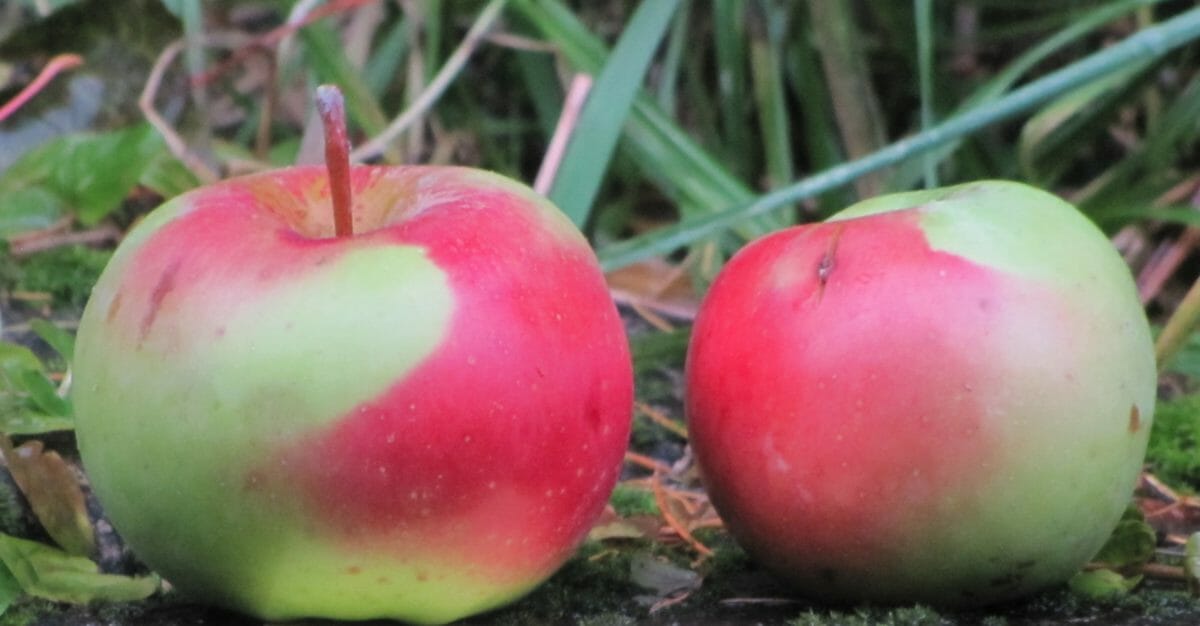 George Raino is an apple lover who helped the project find the Kittagaskee variety in 2017 in an orchard in Boise he’d visited since his early 20s. He calls it “one of the holy grails for lost apples.” The Cherokees grew this apple, prized for its exquisite flavor and historical significance, in eighteenth century North Carolina, before being forced from their land. Raino describes it as “not overpoweringly tart nor overpoweringly sweet, well enough balanced that the bouquet floral overtones of the particular cultivar come through. The base notes of complex tannins add substance.”

That’s enough to make one salivate. Similarly, what does Benscoter do when he finally stands at the foot of a newly found tree? “The very first thing I do is taste an apple,” he says. “I just want to know what it tastes like.”

Maine has a group of ‘Apple Detectives’ that have been working to identify lost apples for over 30 years. They just recently planted a ‘heritage’ orchard where they are collecting representative trees from each lost variety they have rediscovered.

This Lost Apple Project is amazing! You are all wonderful!

What an interesting story. I sure would like to read and know more about this topic. Thank you.

There are several orchards on Saltspring Island in B.C. that are growing literally hundreds of varieties of apples. Apple festival yearly. Close to Washington State. Worth exploring

Read Michael Pollan’s “The Botany of Desire”–the section on Johnny Appleseed and the progression of his apple trees (from the seeds thrown out after the distillers mashed the apples up to make alcohol from them) ahead of the pioneer waves. Since every apple seed is different, and produces a new variety, the only way to propagate desirable apple varieties is through grafting or bagging a section of a twig until it roots. In 2009 a documentary was made from this book (2 hrs long). I recommend both, but the book is such great reading–highly recommend.

What a great initiative.

Now my children will believe me when I explained to them that “wild” apple trees exist and the cattle appreciate the fruit.

I absolutely love apples. One of my favorite things as a young man was to visit old abandoned orchards and sample all of the fruits especially the apples. These days i plant apple seeds to see if i can come up with something really good. Most i graft onto but leave a branch to sample the new one.

The stories behind the old apple trees are fascinating. Gleneagles Golf Course in West Vancouver (BC, Canada) has some old ‘Pewaukee‘ apples by their sixth fairway. Many people ask about these grand old trees and many are very surprised to learn these were planted in the early 1900s when a farm sat on the same site. Few could guess any farm ever existed in this community that is fully residential.

My Uncle in Willowdale, Toronto has a apple tree over 100 years old and he thinks it is a Duchess Apple tree. Great for pies, juice and sauce. Have you heard of these?

Popular
Could Dissolvable Cranberry Film Replace Plastic Packaging Someday?Emily Baron Cadloff
Alaskan Salmon Face a Stream of New MinesBecki Robins
7 Smokable Plants You Can Grow That Aren’t MarijuanaBrian Barth
Where Has All the Mustard Gone?Chloe Faure
Why Don’t We Eat Turkey Eggs?Dan Nosowitz
Explore Modern Farmer
Related
Environment, Food & Drink
Where Has All the Mustard Gone?Chloe Faure
Animals, MTMF
Meet the Maine Teenager-Turned-Landscaper Thanks to Grazing GoatsBridget Shirvell
Animals, Food & Drink, Lifestyle
The Great (Sticker Shock) ThanksgivingLindsay Campbell
Labor, Politics
For Young Farmers, Land Access Will Make or Break the 2023 Farm...Emily Baron Cadloff
wpDiscuz
We use cookies on our website to give you the most relevant experience by remembering your preferences and repeat visits. By clicking “Accept”, you consent to the use of ALL the cookies.
Cookie settings ACCEPT
Privacy & Cookies Policy