It uses “bioinks,” which is not pronounced “boinks.” 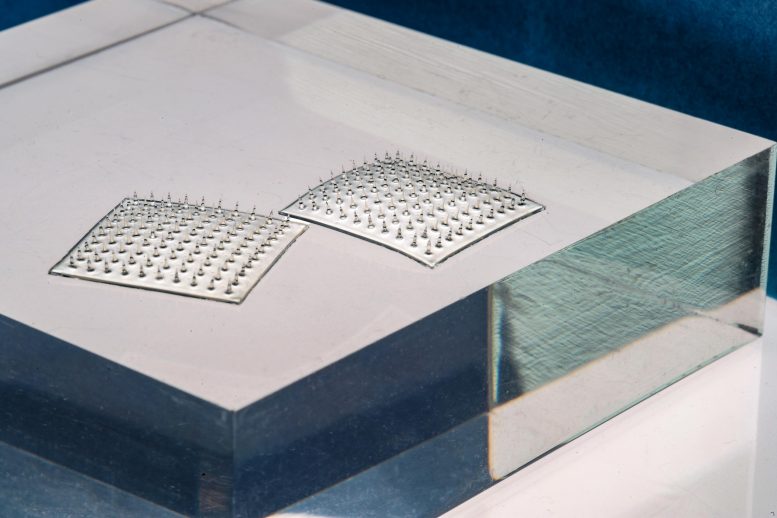 New technologies to detect when food has gone bad, or prevent it from doing so, are in no short supply.

We’ve seen transparent skins made of food waste, fruit-shaped internal temperature gauges, and strawberries dipped in silk, among many other creations. These advances, none of which are widely used yet, and generally geared at the twin problems of contamination and food waste. A new possibility, developed at MIT, hopes to tackle both problems at once.

This new technology arose as a collaboration between a few teams, all working on slightly different projects. The final creation is a sensor described as a Velcro-like strip, or perhaps a very tiny bed of nails. This sensor is equipped with an array of microneedles, which pierce into the food to gather internal samples. That’s important, as it enables the sensor to look beneath the surface of the food.

Those microneedles are crafted from silkworm proteins, which are edible; silk has been used before for food packaging for this reason. The surface of the sensor has a film of bioink, material that can change color. That bioink works as a very thin layer, and when something physically pushes on it, it changes the way light reflects off it—thus changing color.

The researchers crafted bioinks that would react physically to a couple of different scenarios. One is any interaction with the bacterium E. coli, one of the most common causes of food contamination. The other is a pH gauge, which causes the sensor to change color when the pH detected by the microneedles is within a certain range. Changes in pH can sometimes indicate that a food has spoiled; in one study, a lowered pH indicated that a sausage had gone bad.

To test out this microneedle strip, the researchers inoculated a piece of supermarket fish with E. coli, and also waited for it to, essentially, rot. The strip did indeed work, showing a positive for the bacterium in about 16 hours, and indicating spoilage a few hours after that.

Comments from the researchers suggest that they see this as a product used by regular people at home. It could be used to test food after recalls are announced, or after “best by” dates have passed. The idea is that we tend to throw out an awful lot of food that’s perfectly safe to eat; though much of the food waste in the United States comes during transportation or at the retail level, quite a bit still occurs at the consumer level, where this strip could be useful. The next step for this work is to get the time it takes to recognize spoilage or contamination down.