The federal government has suspended all visa services in Mexico (including for H2A visas) in an effort to limit the spread of COVID-19. 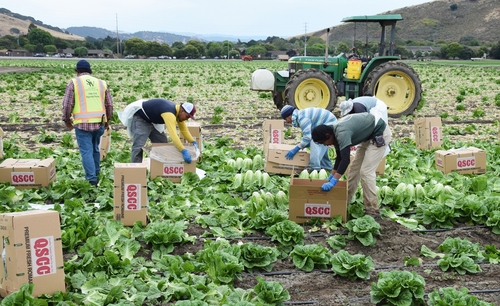 American farmers who depend on seasonal workers are scrambling after the State Department halted new visas for Mexican farmworkers Wednesday.

The State Department has stopped processing H2A visa applications for seasonal workers from Mexico, as part of a suspension of all visa services in a number of countries to limit the spread of COVID-19.

This could be a huge problem for farmers who rely on labor from Mexico, and it could have implications for the American food supply. Last year, 258,000 immigrant workers were approved under the H2A guest worker program, and many of them were Mexican. More than 77,000 H2A visas were certified in March and April.

“The decision to halt visa application processing in Mexico will restrict the number of immigrant workers being allowed to enter the country,” said Zippy Duvall, the president of the American Farm Bureau. “Under the new restrictions, American farmers will not have access to all of the skilled immigrant labor needed at a critical time in the planting season. This threatens our ability to put food on Americans’ tables.”

The Farm Bureau is calling on the government to find a way to safely get skilled Mexican workers into the country to avoid a significant labor shortage for American farmers during what is a vital time for planting and harvesting crops.

Reuters reports that seasonal visas are still being processed in other countries, such as El Salvador and Guatemala. And USDA Secretary Sonny Perdue has said he will work with the State Department to ensure the necessary farmworkers will be admitted safely.

How can I volunteer on my local farms?

Don’t let illegal workers in as the h2a is mostly big farms.Trump wants a wall and big ag and most farmers vote for Republicans to get subsides.